After three decades of sitting stagnant, this 33m2 apartment in Paris, France, was due for a freshen up. However, it would take new ownership and a desire for a Parisian pied-à-terre to make it happen. Read on to learn what €51,000 ($56,400), new wiring, new plumbing, and a new look can do for a dark and dinghy second-floor Haussmannian apartment. 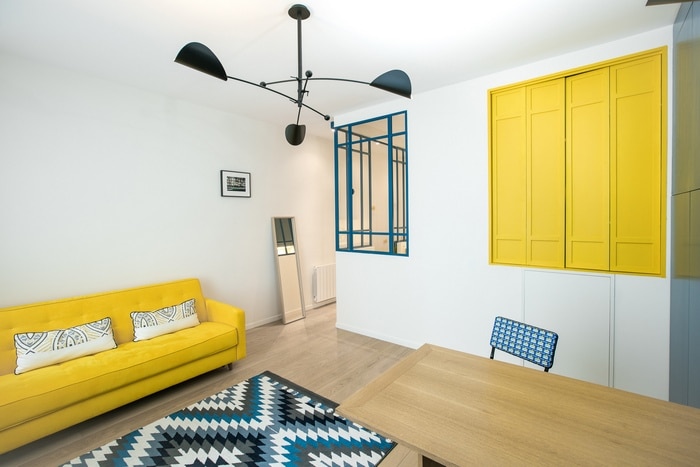 One of the first jobs in the apartment was to knock down all of the partition walls. Some unusual surprises also saw the need to redo all the joists under the parquet, too. With a few wall changes, the living room went from dark and dinghy to light and bright.

Shades of white, blue, and yellow added an element of space, even though the living room’s area was slightly smaller to accommodate a more generous kitchen and sleeping quarters. 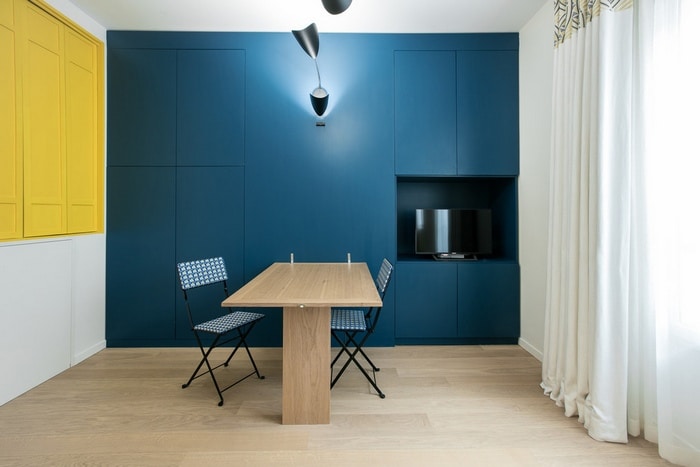 Storage is vital in any home, but it has to be more discreet when you’ve only got 33m2 to play with. Designer Géraldine Laferté used the client’s preferred duck blue colour to hide shelving and wardrobing in the feature wall. The designers also cased an old chimney flue, designed the unique storage compartments, and added an oak fold-down dining table.

When no one is using the dining table, it can fold up to save space. It then becomes just part of the wall, alongside all the seamless storage that blends into the background. 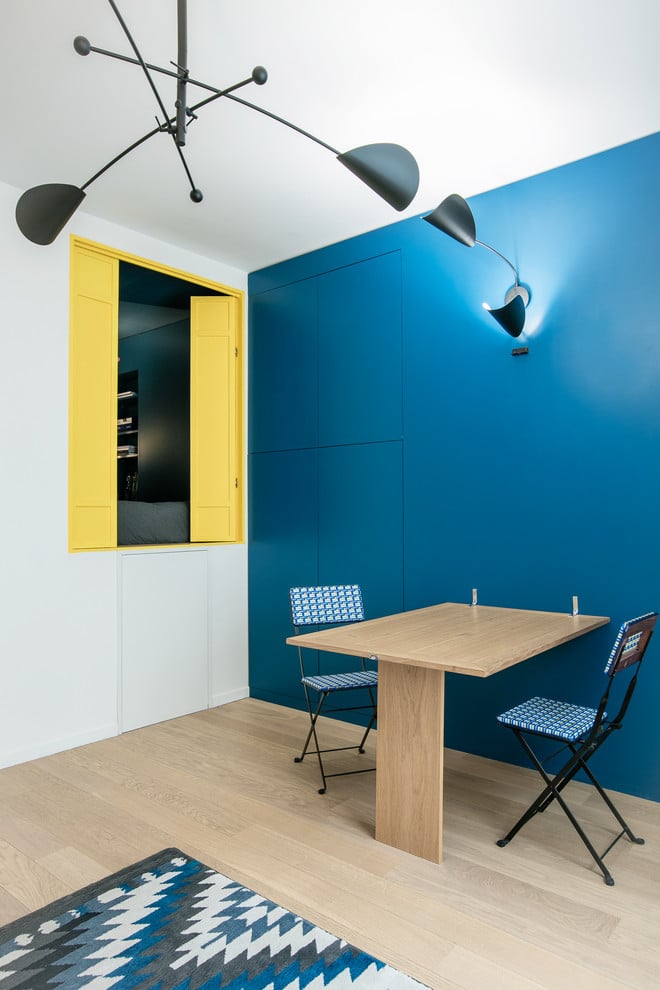 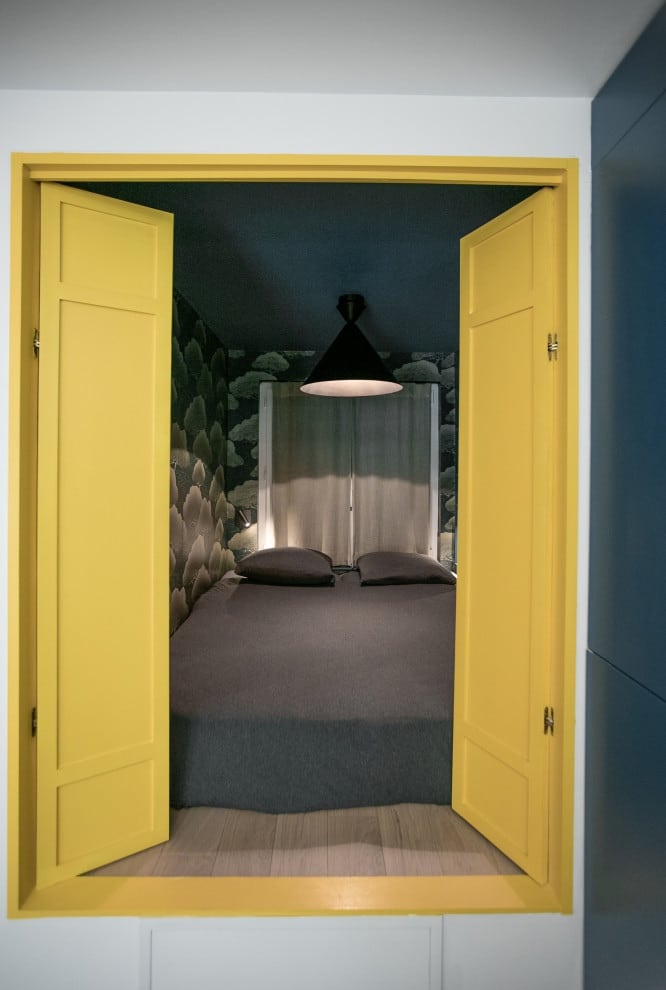 One of Géraldine’s clients’ requests was that the apartment had to have a ”real” sleeping area, and they delivered. What used to be the bathroom was turned into a sleeping alcove. Beautiful pine shutters with a vibrant yellow coat of paint accentuated the entrance to the area.

The bed was also raised over one metre from the ground, with a 140 x 200 cm mattress over the top. Below the bed is 3-4m2 of storage space, which is also home to the water heater cupboard. Access to the bedroom area is via a ladder, which hides in the closet when not in use. 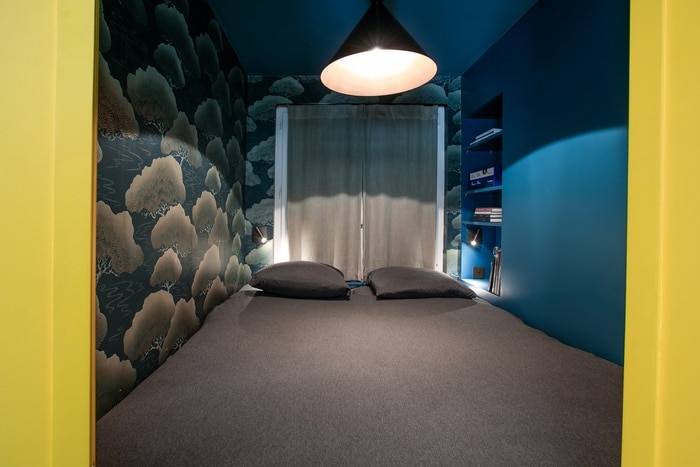 To add a unique South American theme, beautiful two-tone wallpaper was used in the bedroom. This colour, partnered with the yellow, blue, and white throughout the rest of the apartment, offers harmony and warmth to the space.

Even with minimal space in the bedroom, there’s still no shortage of storage beside the bed, as well. On each side of the chimney flue, shelves have cleverly been installed to maximise the versatility and function of the area. 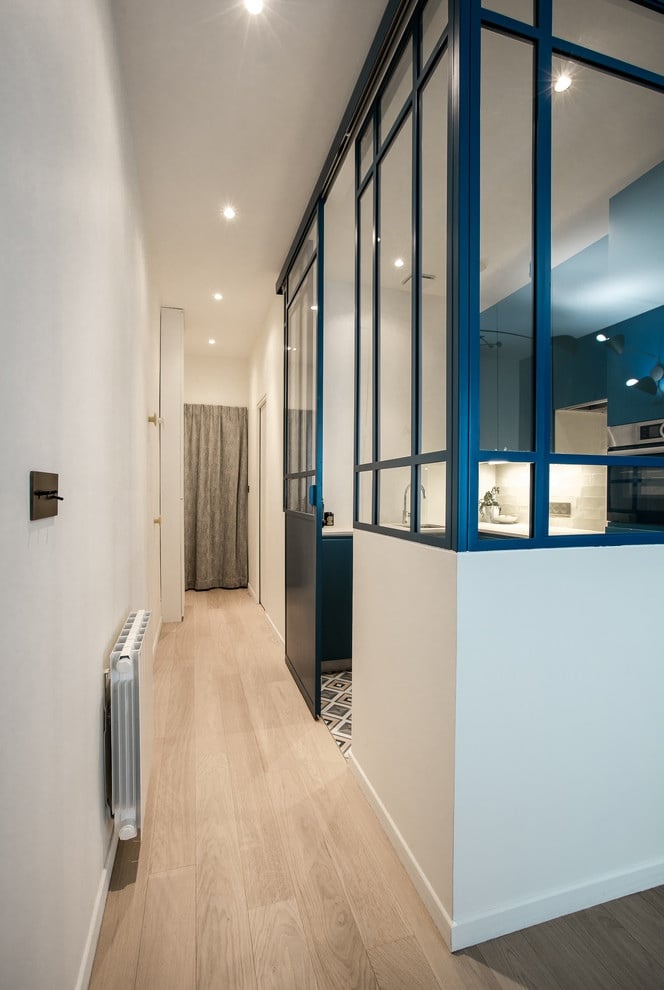 In the new layout, the bathroom is near the apartment’s entrance, and the kitchen is next to the living room. Now, the home revolves around the kitchen. A subtle partition between the two ticks all the boxes for the client’s request not to have the kitchen directly by the living area. 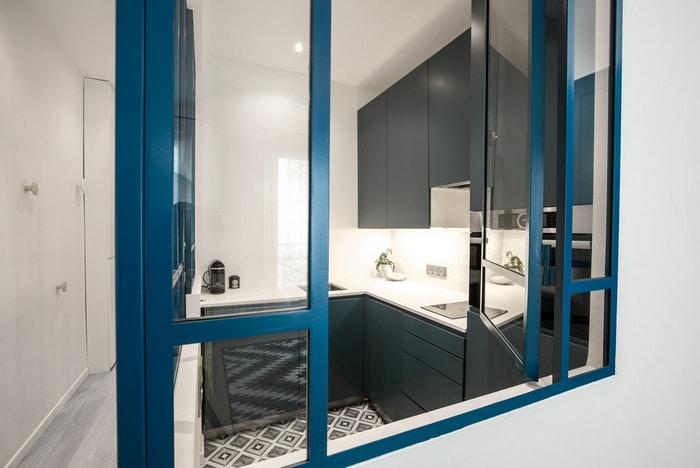 In the new layout, the bathroom is near the apartment’s entrance, and the kitchen is next to the living room. Now, the home revolves around the kitchen. A subtle partition between the two ticks all the boxes for the client’s request not to have the kitchen directly by the living area.

The kitchen is something truly beautiful, too, with a beige ceramic worktop and textured tiles that imitate cement. There is also enough space for a washing machine, fridge, dishwasher, oven, and hotplates. 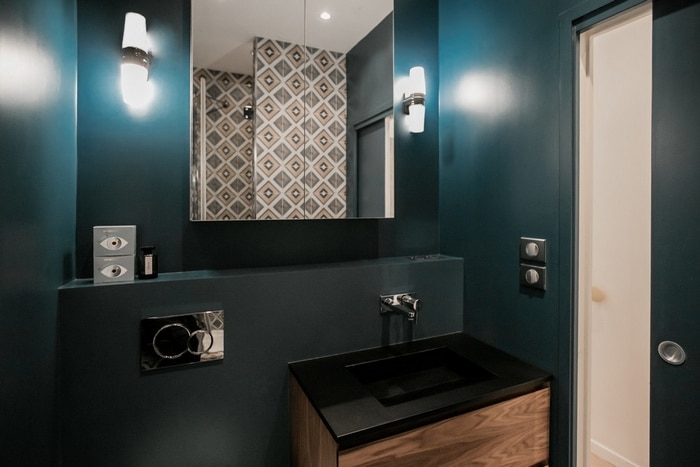 A similar blue that runs through the entire apartment is also found in the quaint bathroom by the home’s front entrance. While it’s small, it’s entirely functional, with everything a homeowner needs to live comfortably. 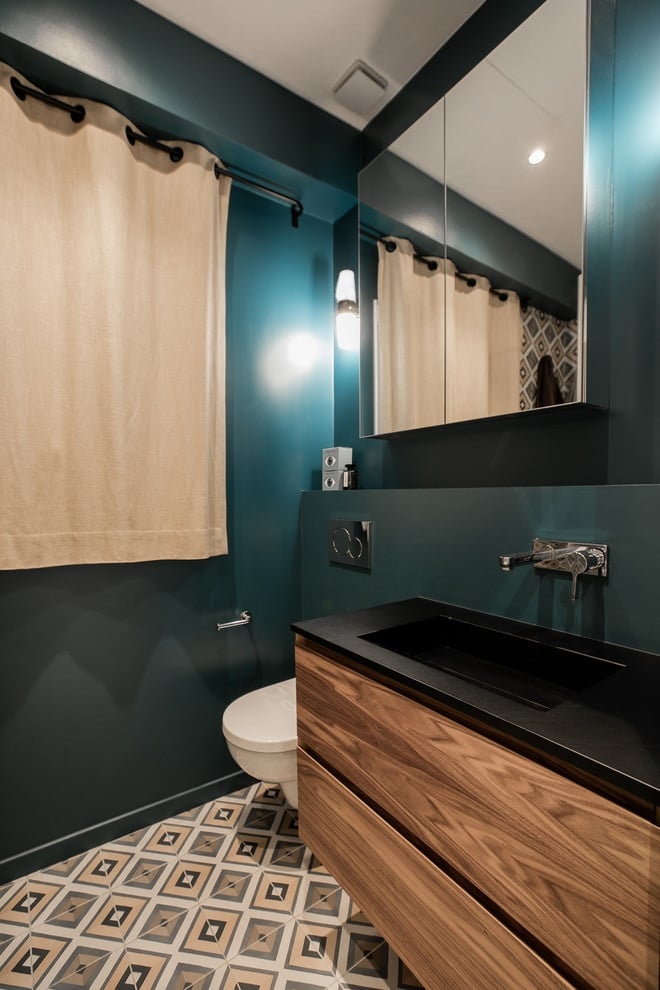 No stone was left unturned in making the bathroom serene and welcoming. It has an American walnut imitation finish, black granite vanity top, beautiful shelving, and a mirror. The same tiling in the kitchen is what is present in the bathroom, too.