It wasn’t exactly love at first sight for Pittsburgh, Pennsylvania couple Ethan and Kim Weiss. They both turned to the internet to find love, and all Kim could see was a man wearing a motorcycle helmet and a bio consisting of three beer emojis.

Although, she decided to take a chance on love, swiped right on Tinder, and that’s when their adventure began. It wasn’t long before they were looking for skoolies online to fulfill their dream of exploring the United States and enjoying every moment. 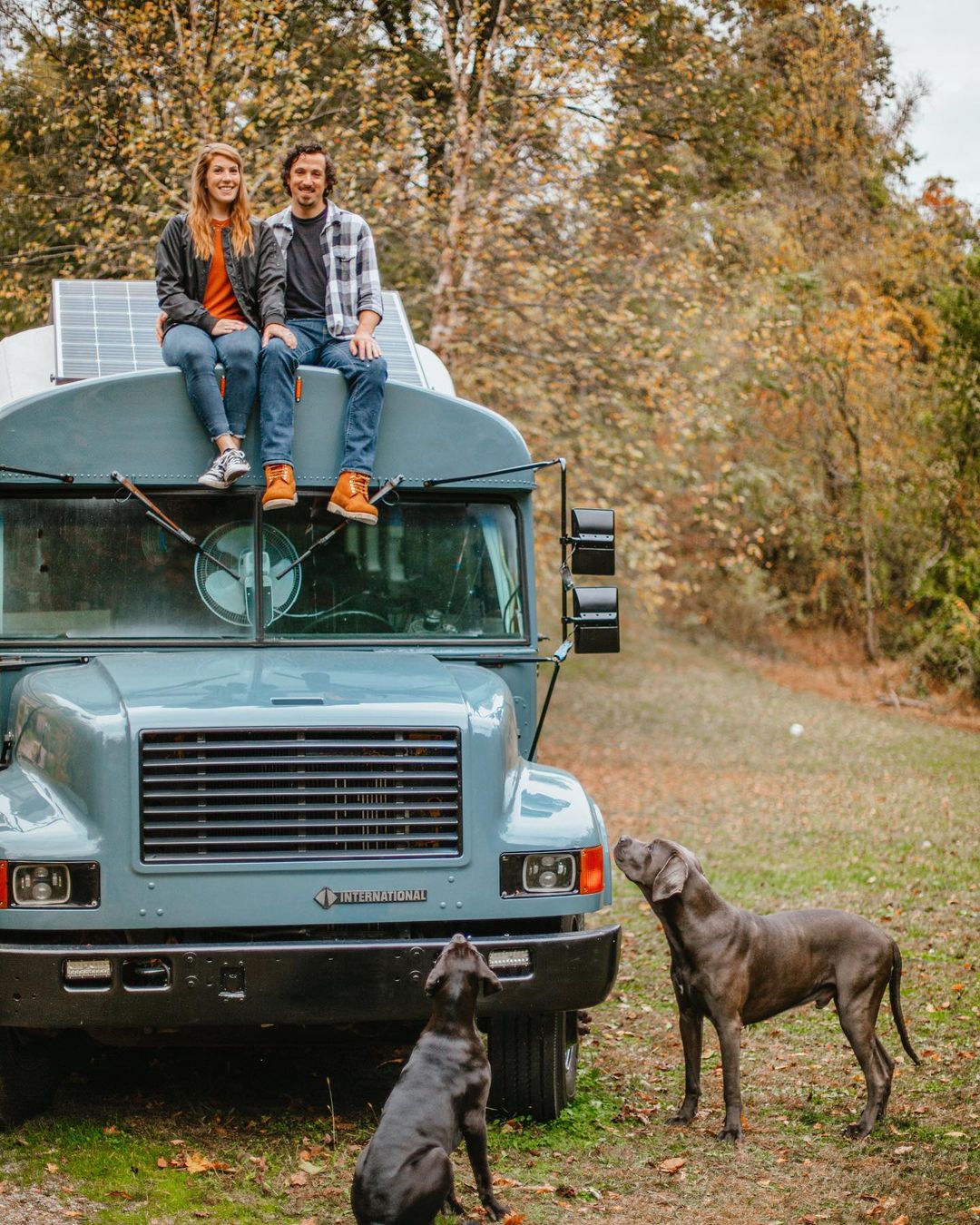 By the time December 2020 rolled around, they were ready to hit the road, and they had their two great Danes, Milo and Blue, to join them on their adventure. They were also fortunate to be able to work on the road during their adventures. Ethan is a traveling physical therapist, while Kim is a social media manager.

Kim says their goal wasn’t to have a house on the road to find happiness but, instead, to enjoy every moment of their journey and be happy along the way. They also wanted to redefine the meaning of ‘normal’ life and explore all parts of the United States to find their ‘forever’ spot where they could settle down and start a family. 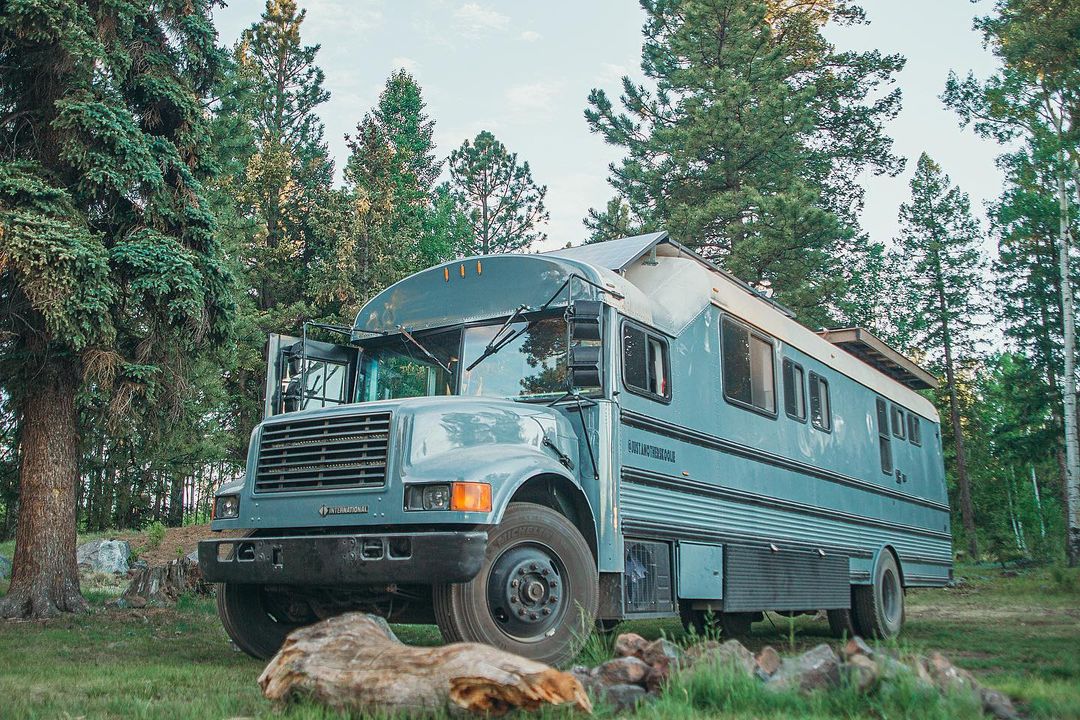 Ethan and Kim Weiss purchased a 1997 Thomas International Bus 3800 DT466E on Craigslist for $2,500 and spent $20,000 converting it into a house on wheels. Part of this process involved raising the roof due to Ethan’s height. They used two farm jacks on each side of the bus and added an extra 20 inches. They also took the opportunity to install two skylights, four solar panels, and a rooftop deck. 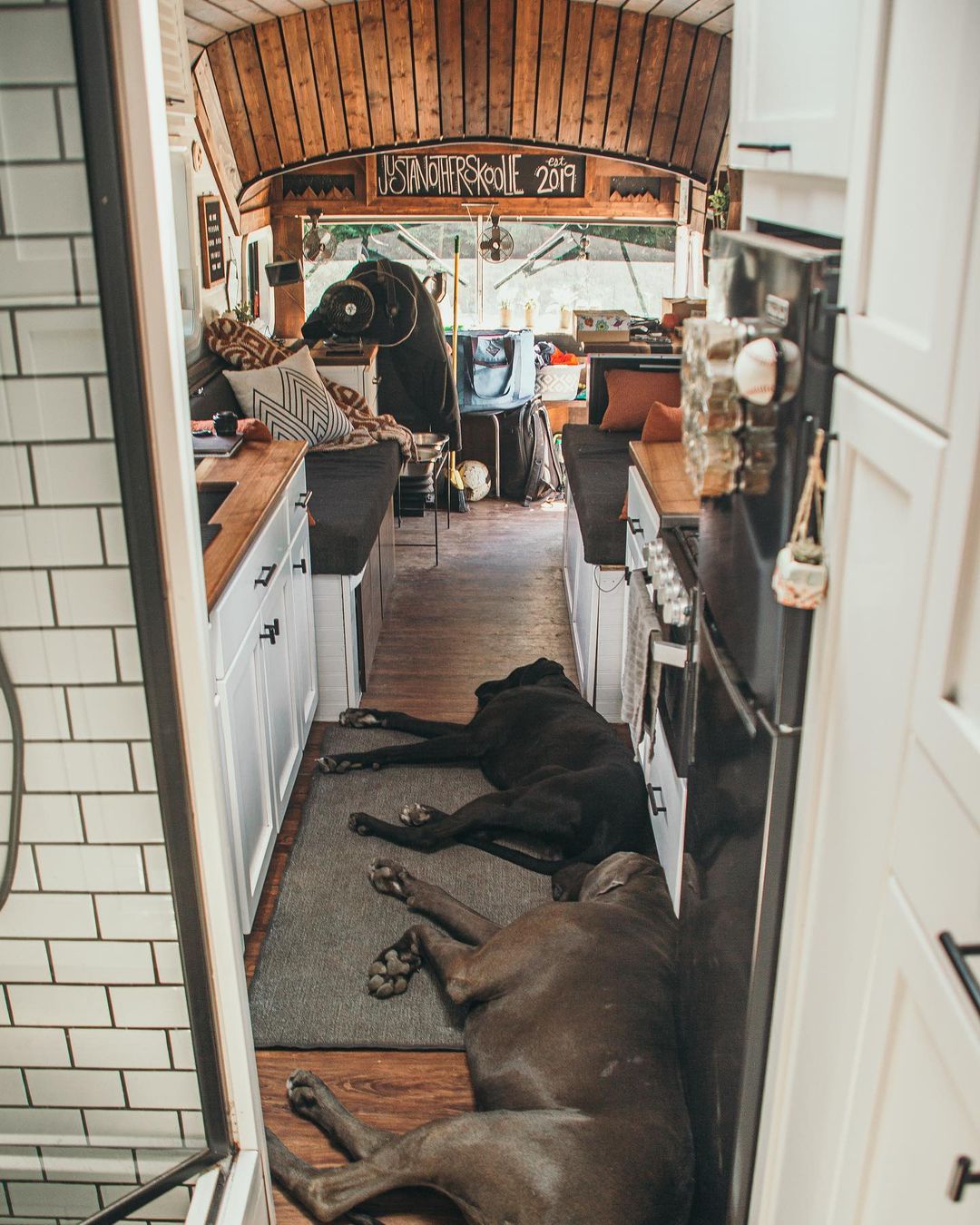 While many people renovate their buses with light colors for the illusion of space, Ethan and Kim decided to choose darker colors consisting of a dark walnut stain. They loved the look, and they weren’t worried about a dark ceiling making the space look smaller due to the extra 20 inches of height they had. They also had insulation experts install 2-3 inches of spray foam in the ceiling and walls during the lining process. 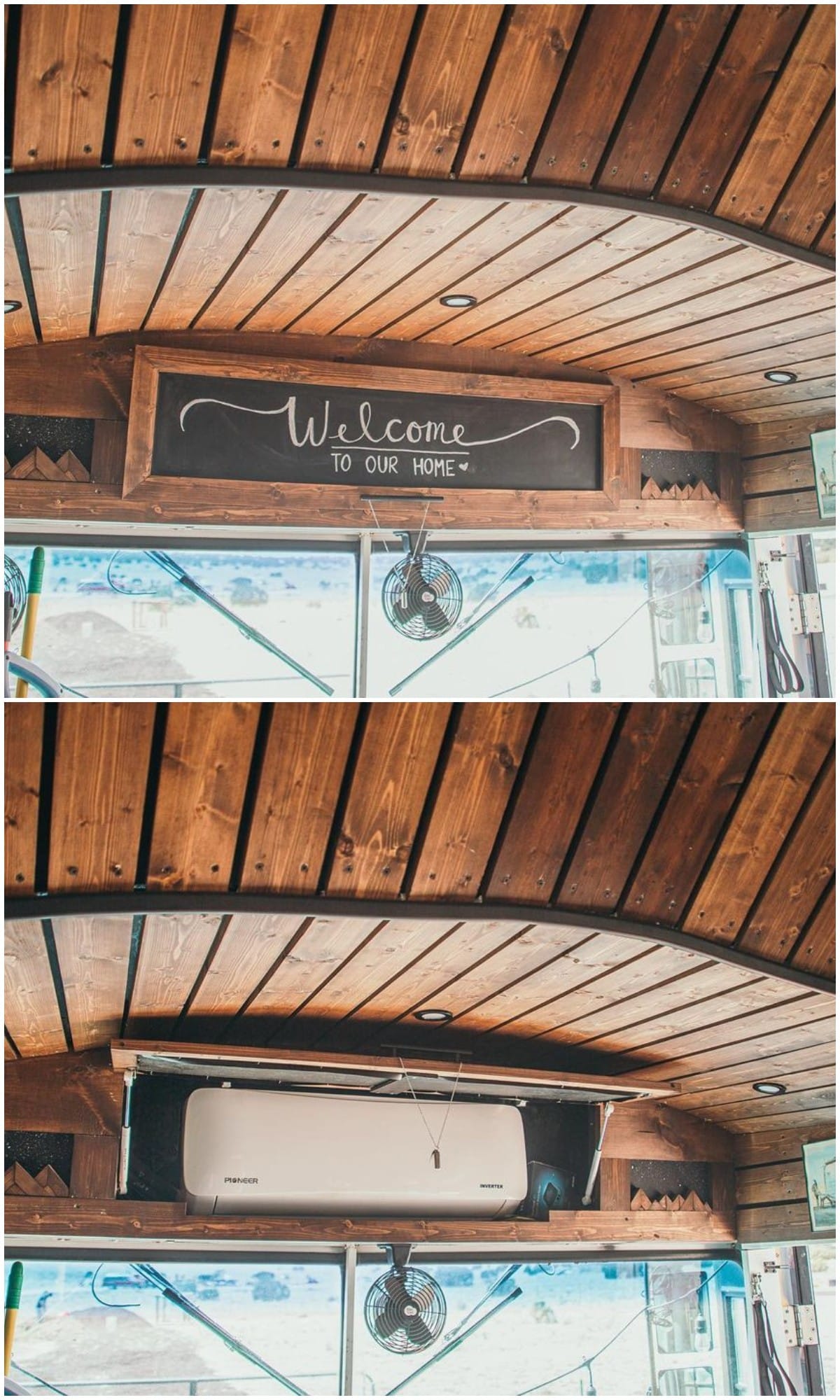 Kim and Ethan cleverly used existing built-in storage above the dash that once housed the school bus medical kit to hide their 12,000 BTU Pioneer Minisplit unit. This effectively heats and cools the bus while being out of sight when it’s not in use. They installed two diesel heaters in the front and back for extra heat. 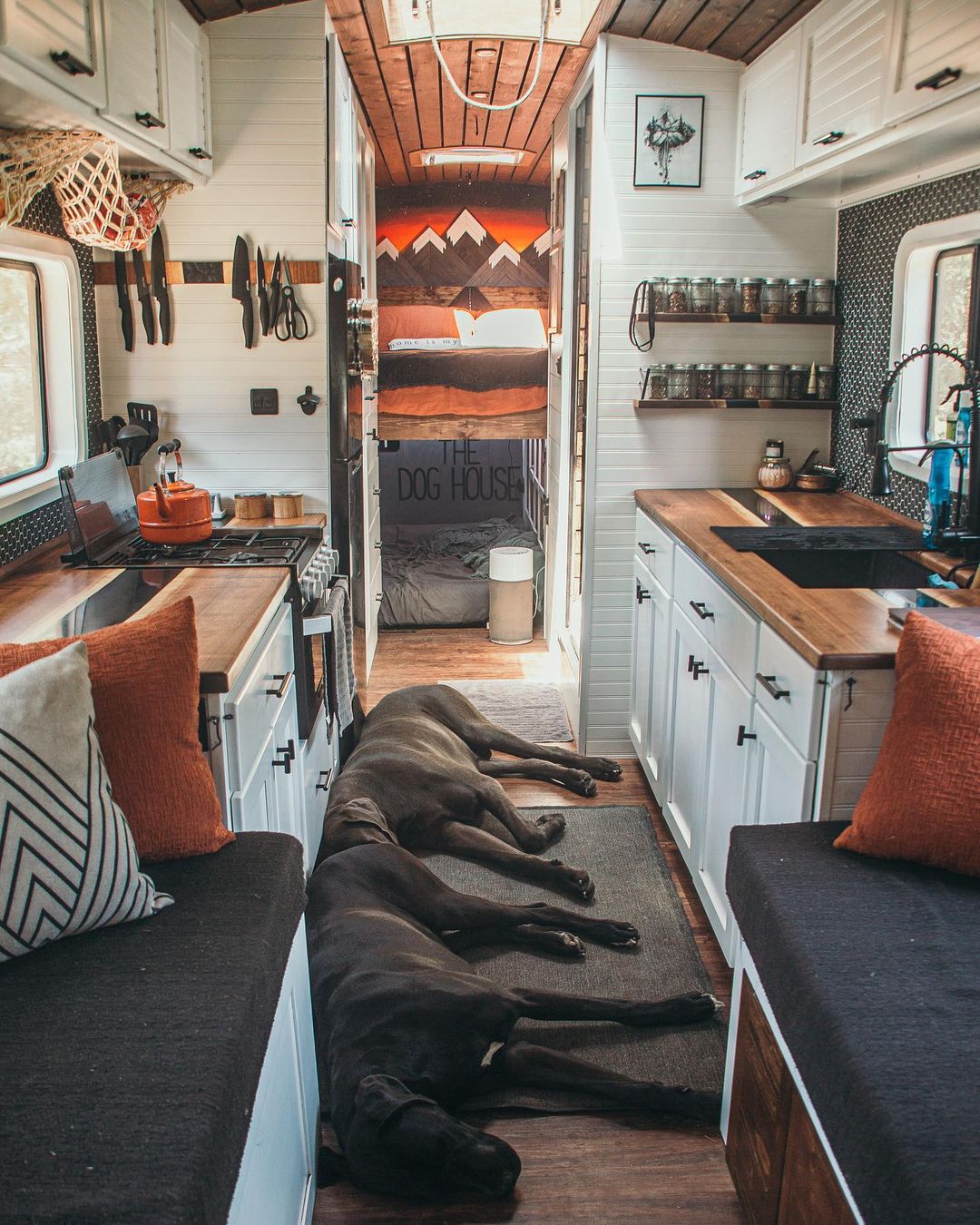 The kitchen has been well thought out, with the stove and oven on the passenger side and the sink on the driver’s side. Kim and Ethan decided to do this as plumbing for the shower was already running through the driver’s side. 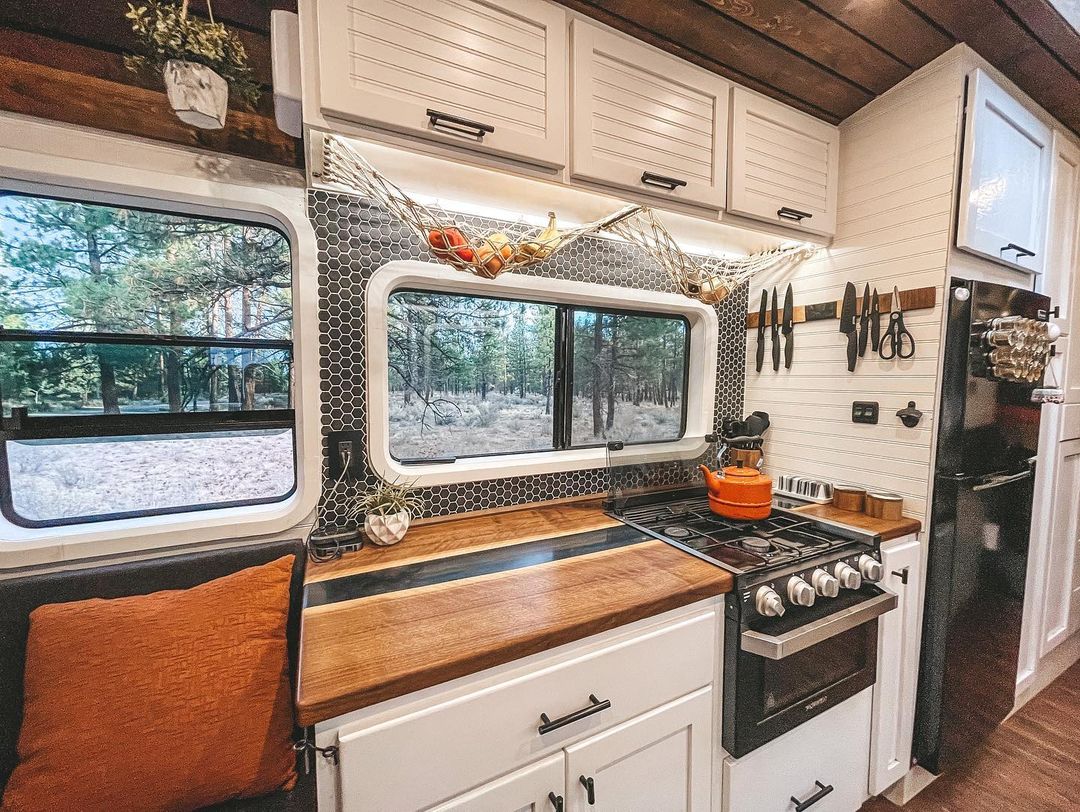 This traveling couple has more counter space in their bus than they did in their old apartment. There is 13 feet to work with, including six feet on one side and seven on the other. They also made and installed a beautiful resin river countertop that they learned how to make by watching YouTube tutorials. 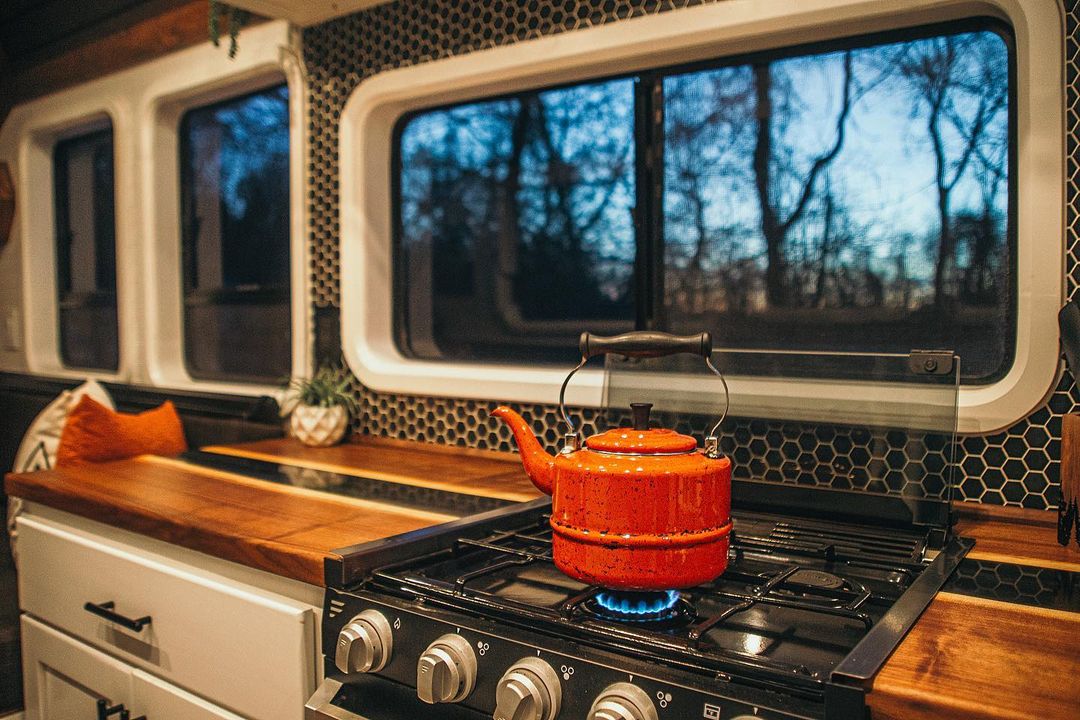 Cooking in the bus is made easy with the black Furrion 17-inch three-burner two-in-one range oven. Kim and Ethan opted against having a microwave, but they do travel with an outdoor grill. 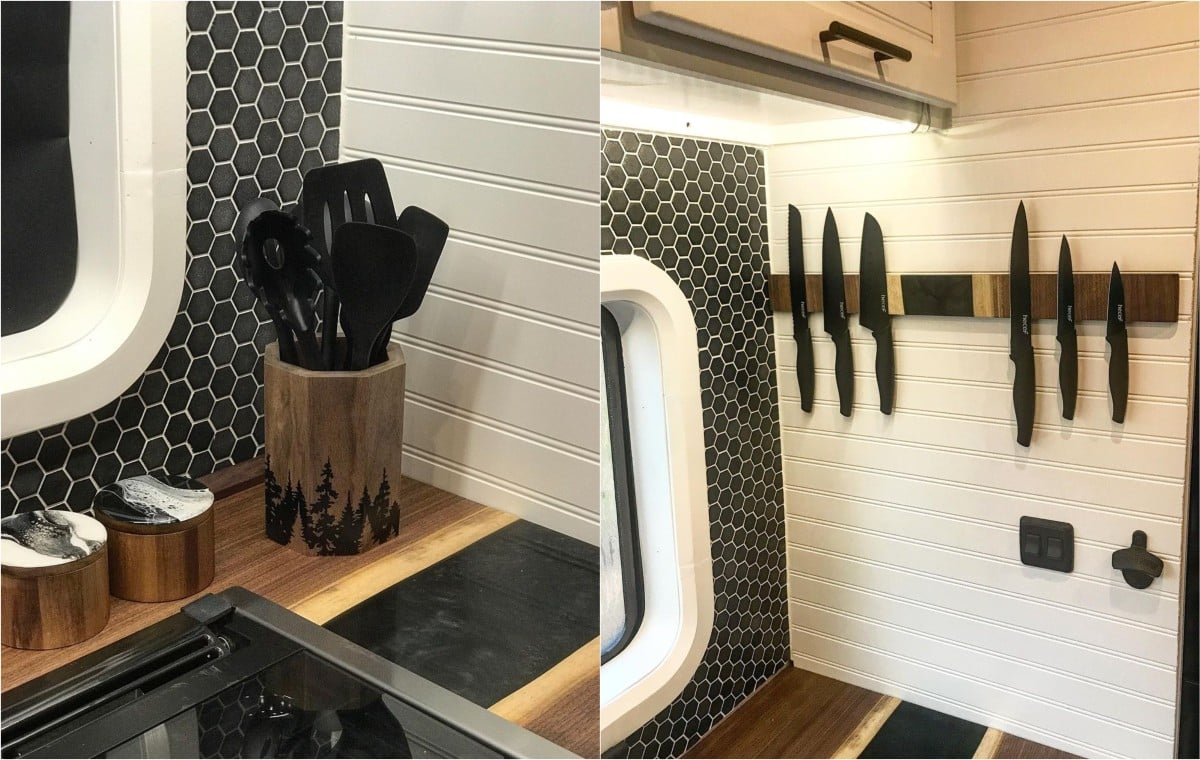 After spending so much time and effort making a resin river countertop, they weren’t going to let any scraps go to waste. They turned all remaining pieces into floating shelves, a utensil holder, and a knife rack. All they had to do to make the knife rack was cut out a section for a magnet and secure it with glue. 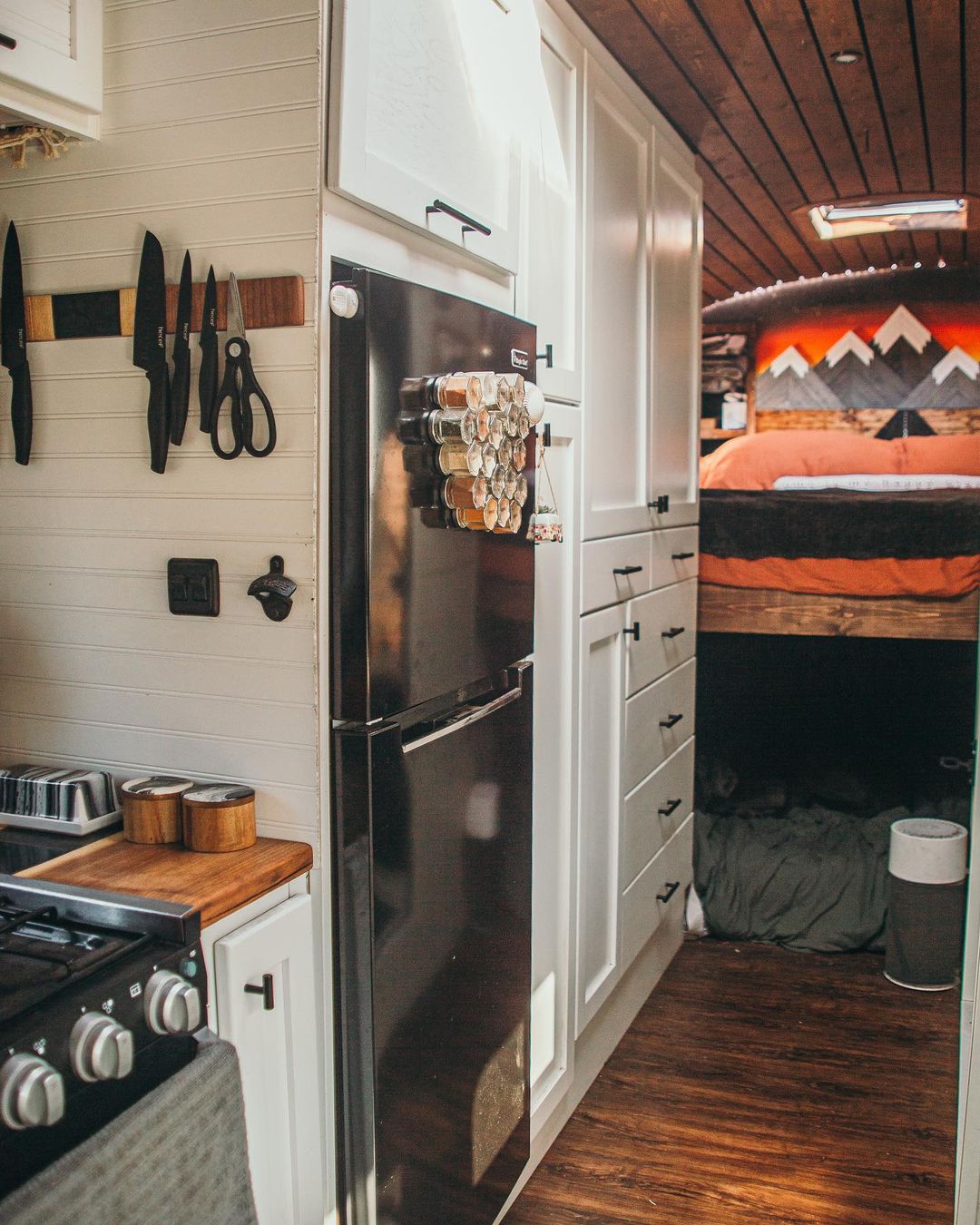 Kim and Ethan’s kitchen is set up similarly to an apartment. It features a 10.1-cubic-foot Magic Chef fridge freezer that they also use to store their spices. As they are craft beer enthusiasts, there is a second mini fridge strictly for beer in the front of the bus. 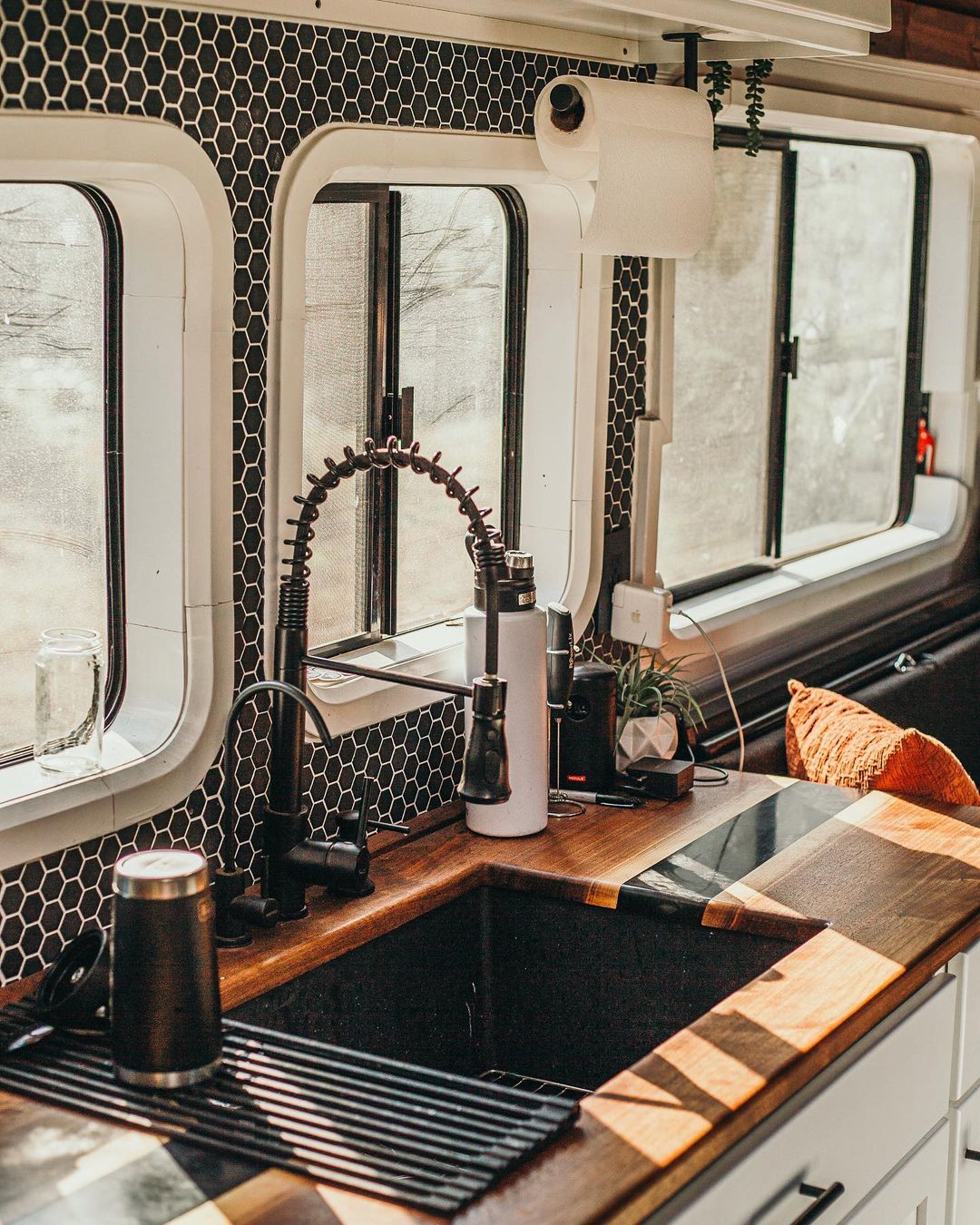 The bus kitchen is everything Kim and Ethan need to cook up a storm. It features a large sink, an attractive faucet, a tap for filtered water, and even a built-in soap dispenser. 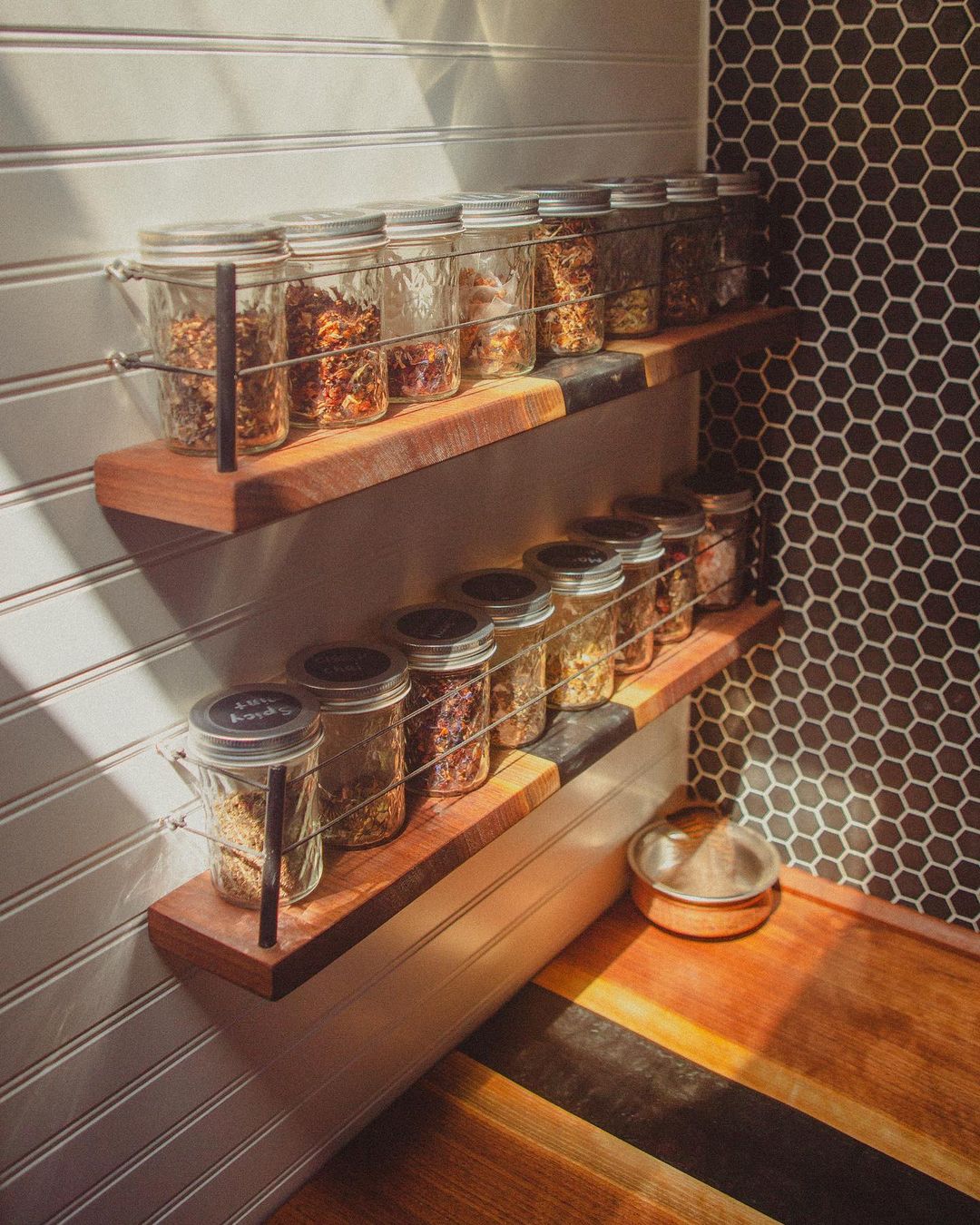 The floating shelves in the kitchen were made using off-cuts of the countertop and they stand out beautifully against the light wall color. Kim uses them to store her tea collection. 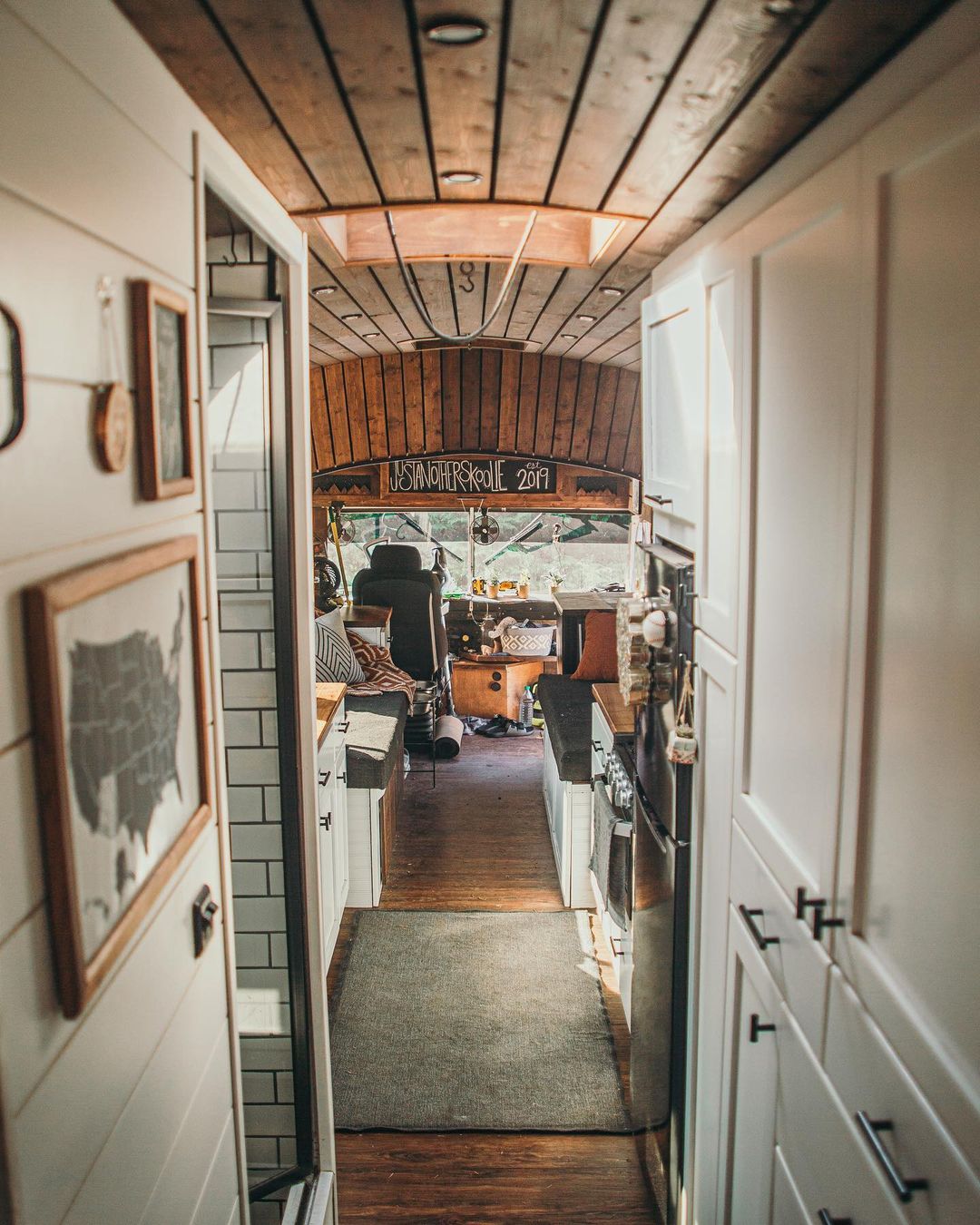 The hallway is in the center of the bus, providing access to all areas. The bathroom is on one side with a tiled and grouted shower, hidden storage, and a DIY compost toilet. The other side features a closet and pantry. 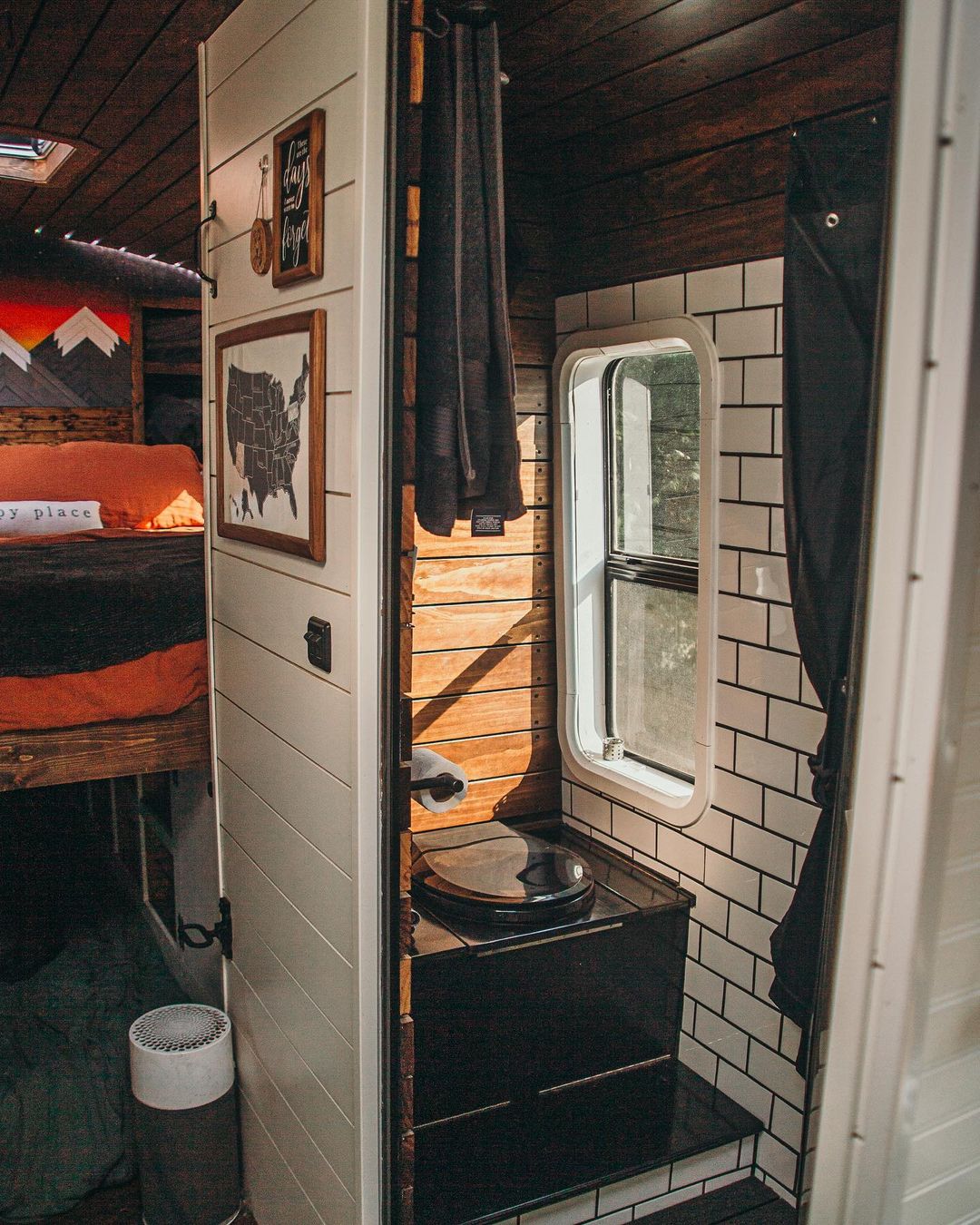 The bathroom is a beautiful combination of wood and tiles. It also features an easy-care compost toilet. 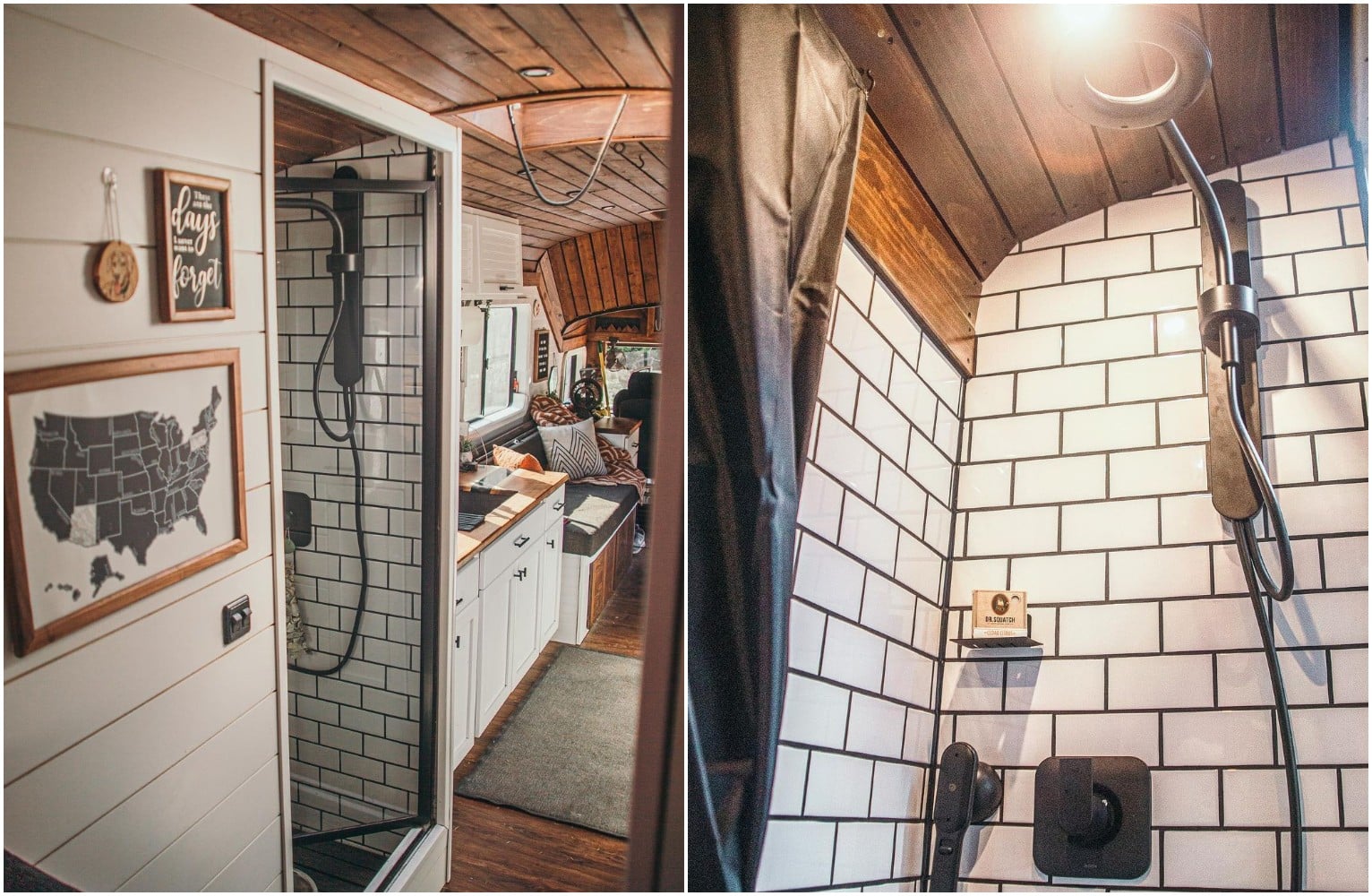 Showering is a pleasant experience in the house bus. Kim and Ethan installed a water-saving Nebia showerhead. It provides a spa-like experience but also saves water since they only have 100 gallons. 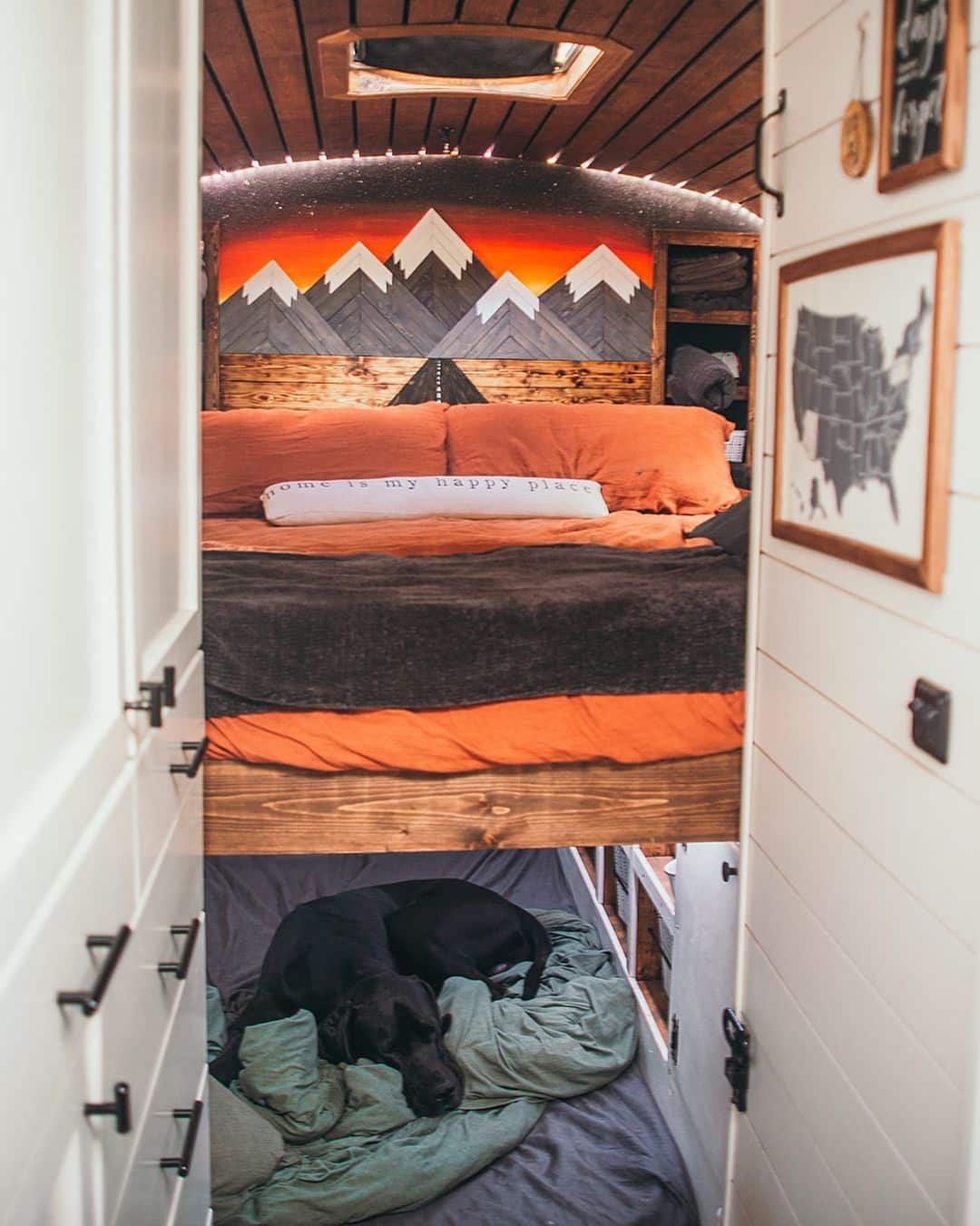 The bedroom is located in the rear of the bus, and it’s a beautiful sanctuary to relax in at night. The loft bed is positioned 40 inches above the ground, which gives plenty of space for the dogs and the water tank storage. 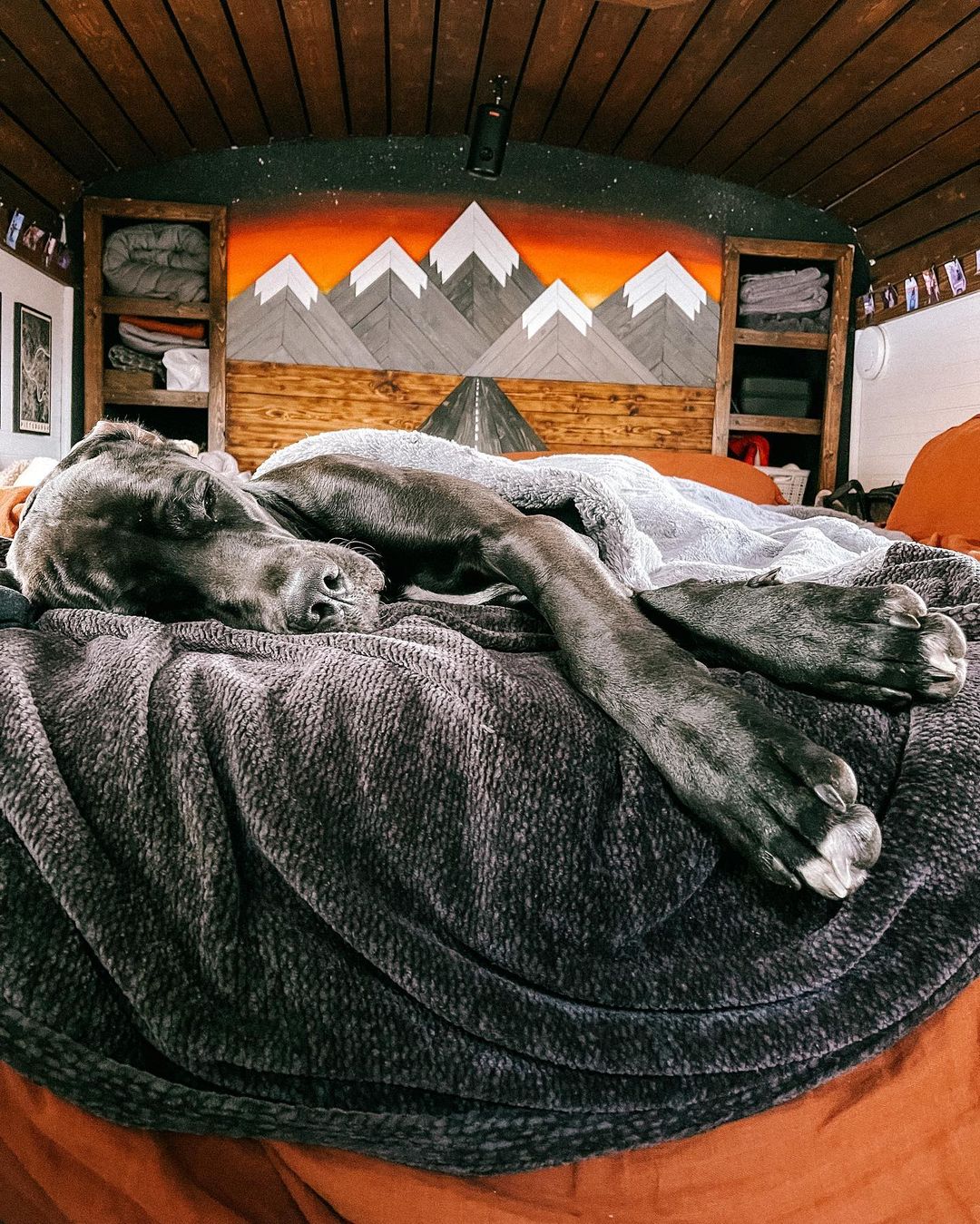