Ashlee De Campo from Western Australia has been living in a tiny house for around 18 months and wouldn’t have it any other way. It all started when she began listening to The Minimalists podcasts. She loved the idea of living with less, especially as she had been living in a three-bedroom home in a city by herself.

Rather than ponder the idea of tiny home living and chip away at it over time, she dove headfirst into the challenge. Ashlee took a year off work, built a tiny home registered as a caravan, and travelled 2,500km in it in her first year. She hasn’t looked back since.

Ashlee’s tiny home is actually much smaller than your average tiny house, to ensure she could register it as a caravan. It’s 5.5m tall, 2.5m wide, and weighs around 3.3 tonnes.

Given its registration status, she can only park it in one location for a short time. However, that suits Ashlee well, as it enables her to see more of the country. Tiny home living is serving Ashlee well and is making more people consider whether such a lifestyle could be right for them, too. 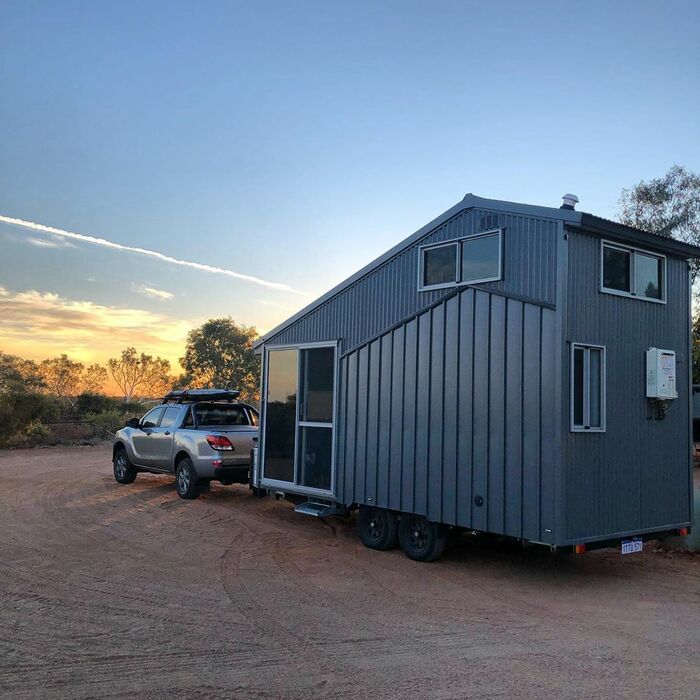 Western Australia’s Ashlee De Campo took a year off work to build a 5.5m x 2.5m tiny home, registered as a caravan, to tow around the country. She parks it at sites with power and water and uses natural gas for hot water and cooking. 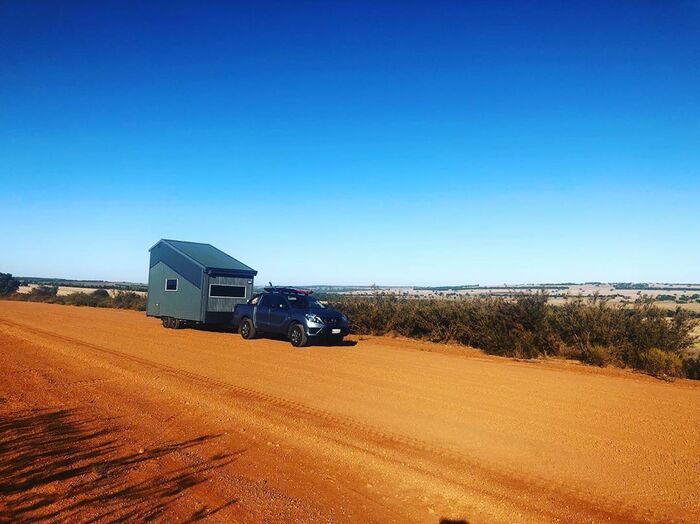 Ashlee had help building her tiny home, and it’s far smaller than most others you see. At 3.3 tonnes fully-loaded, she also owns a truck with a 3.5-tonne pulling capacity. 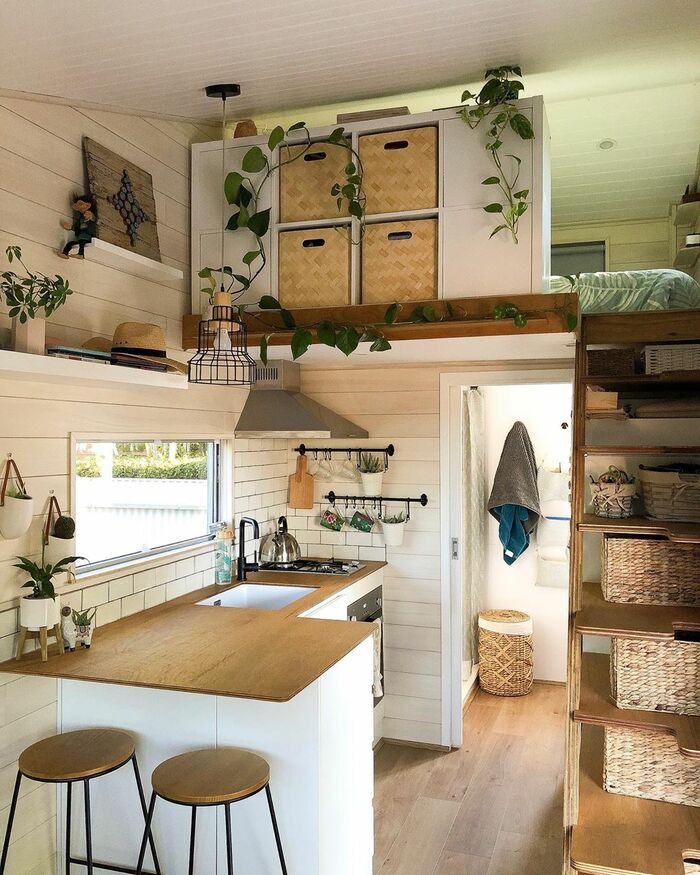 The interior has a beautiful, natural theme that Ashlee adores. It’s also spacious enough for two people to live comfortably, with bar seating at the bench she can use for working or dining. 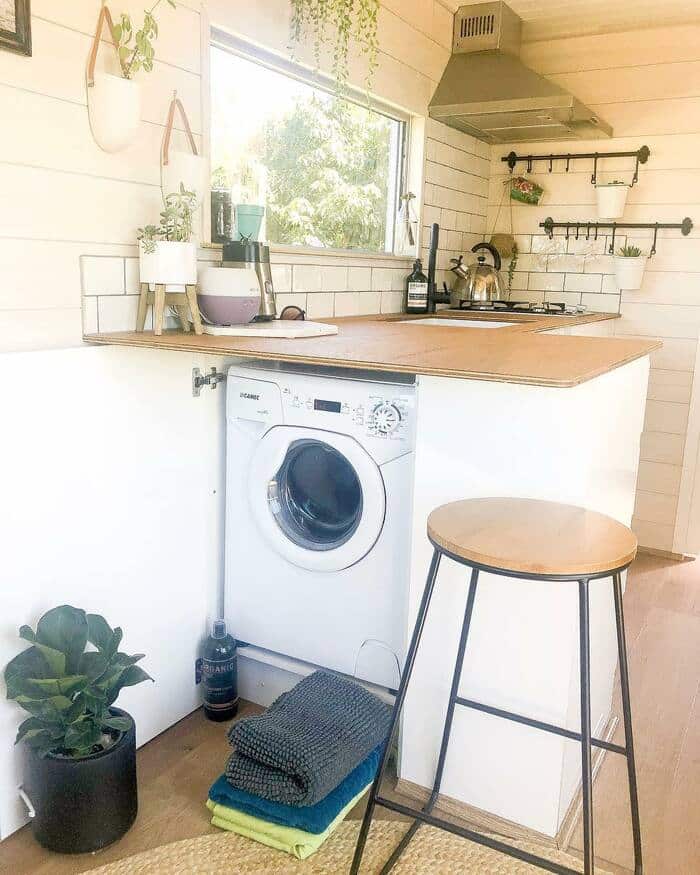 The kitchen breakfast bar may look like any ordinary bar, but it’s not. It has a cupboard door that opens to reveal a 4½ kg washing machine. 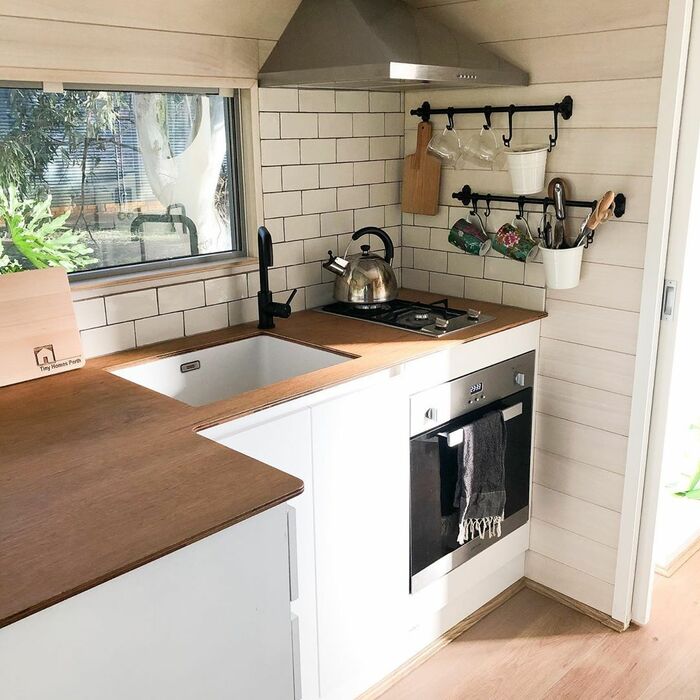 Ashlee spent a lot of time planning her kitchen because she knew it would be where she spent the most time. It has a generous amount of storage, subway tiling against a beautiful wood bench, and a two-burner hot plate.

However, Ashlee said if she changed anything, it would be the sink. She believes it’s a lot larger than it needs to be for the space. 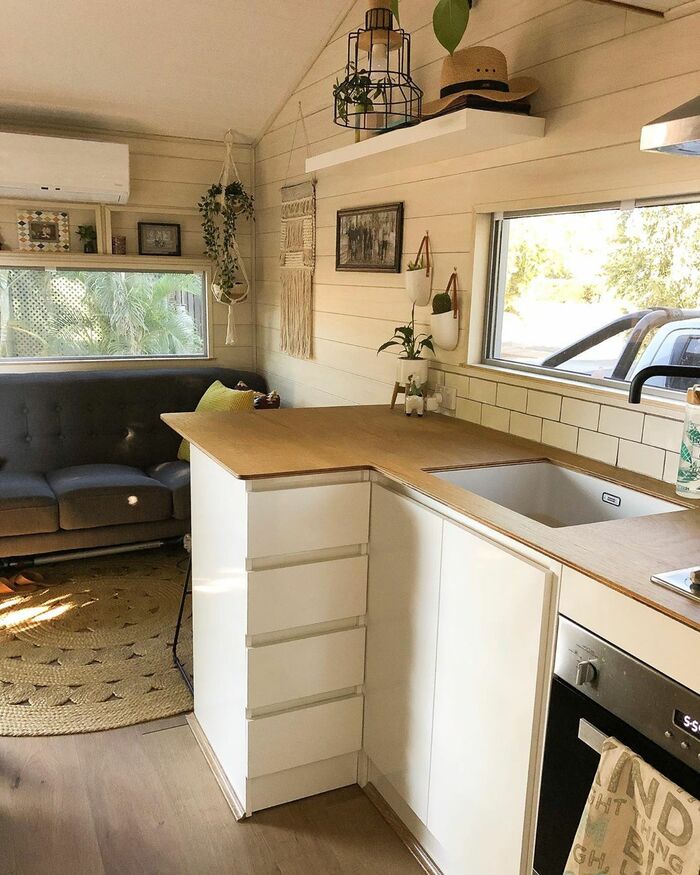 The functionality of Ashlee’s kitchen is something she appreciates. She loves the small drawers, upper shelving, and baskets throughout for storage. 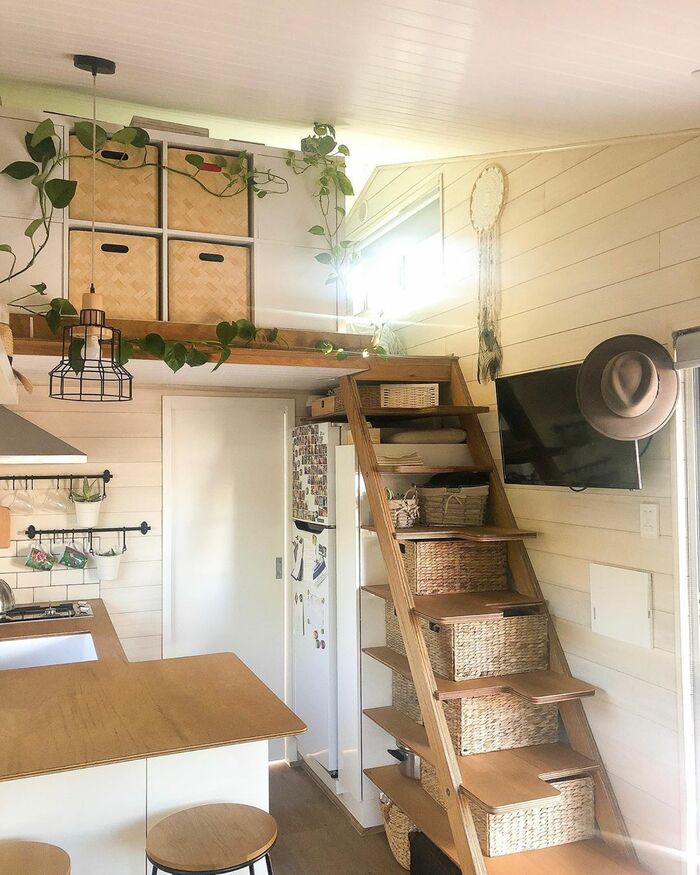 The fridge in the kitchen is one you would expect to find in a traditional home. It’s a fridge freezer with more than enough space for food storage for one or two people. The kitchen also has a push-closed pantry and storage in the rear. Adjacent is a staircase with storage baskets that lead to the bedroom loft area. 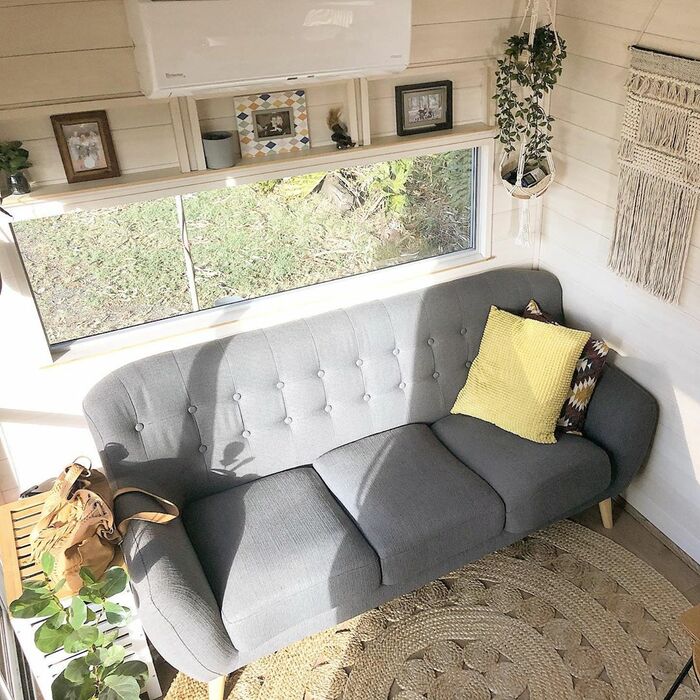 The living area is surprisingly spacious, with a three-seater sofa and storage baskets. Ashlee has enough storage space in that wooden storage box for 20 pairs of shoes! 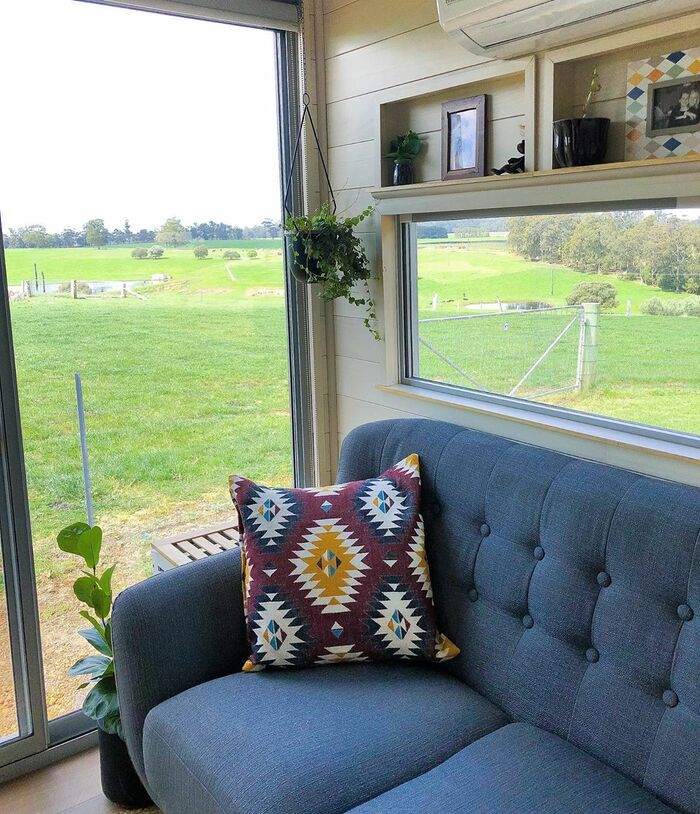 The living area was well thought out with plenty of windows to let in natural light. No matter where Ashlee parks her tiny home, she can enjoy a light, bright, and spacious environment. 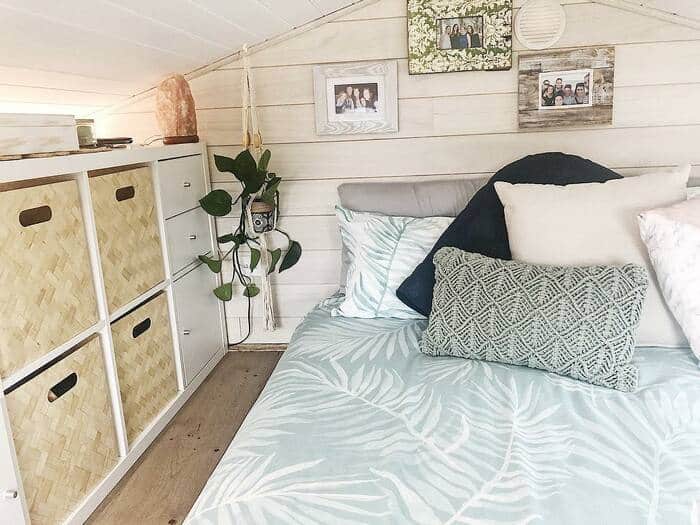 The bedroom is in the loft area. It has enough space for a queen-sized bed, along with an abundance of storage space for clothing. Since moving into the tiny home, Ashlee has been more careful about the purchases she makes. She also realises how easy it is to live with less. 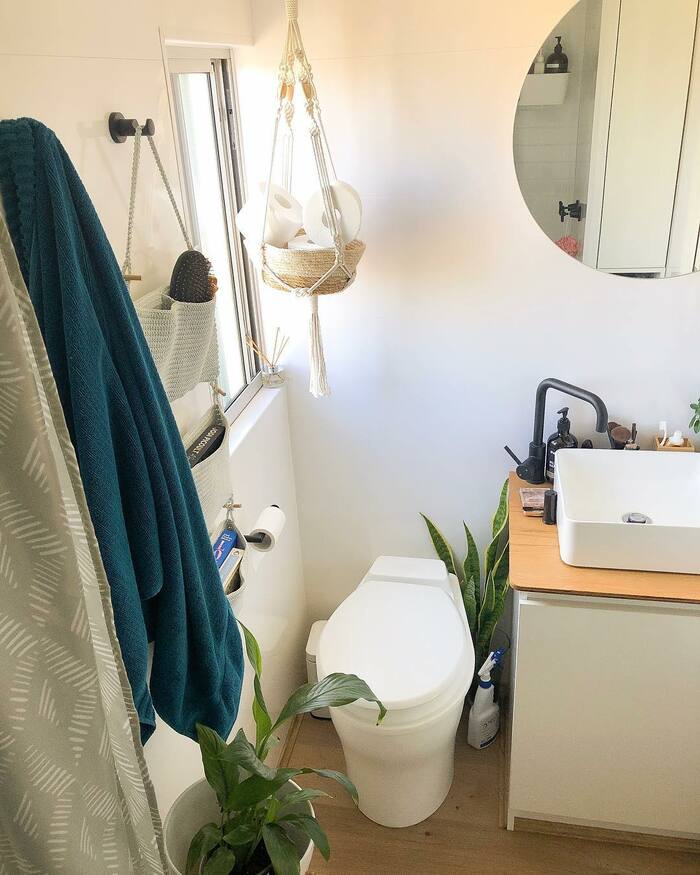 Some people may be put off by the idea of a composting toilet within a small space, but Ashlee couldn’t be happier with her choice. The bathroom is nearly 1.5 metres long, which is quite generous, given that the entire tiny home is just 5.5 metres.

Ashlee said the toilet took some getting used to. Still, she appreciates how easy it is to change the sawdust and that it’s nearly as practical as a traditional home’s bathroom. 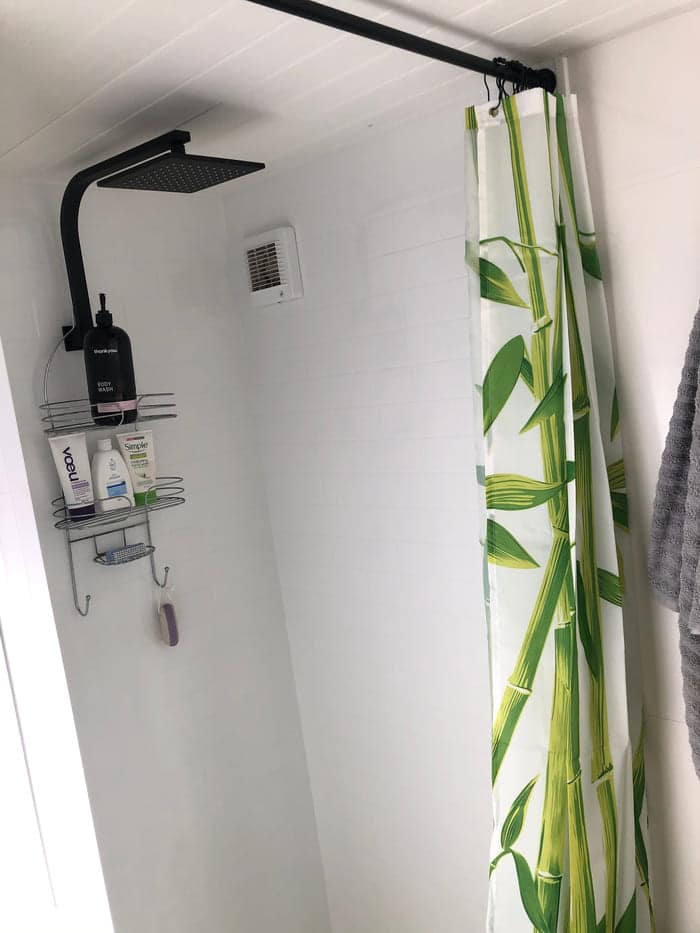 A tiny home may mean you need to downsize your possessions, but it doesn’t mean you need to make those vital things like showers and toilets smaller. Ashlee’s shower is 90 x 90cm, which is more than comfortable. She also has plenty of storage in her bathroom, including shelving for towels. 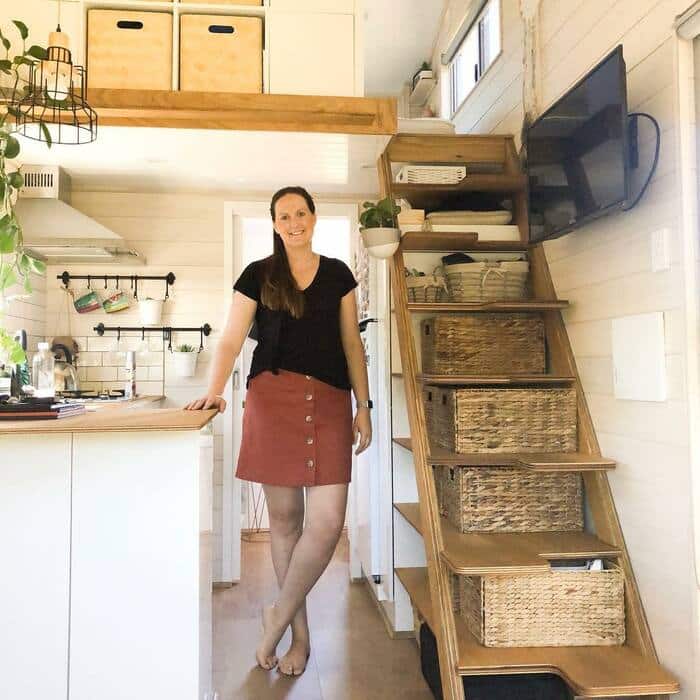 Ashlee is pleased with how her adventure around Western Australia has played out. She worked with a builder to complete an entirely functional tiny home, and she loves how flexible it is while giving her the freedom to choose where to stay.

Ashlee doesn’t plan to live in a tiny home forever but believes it’s working well for her so far. It has also given her a new perspective on what is actually necessary to live a comfortable, fulfilling life. You can follow her tiny living experience on Instagram