Sam, Keiran, and their two sons Aubrey and Ellery, have always been outdoor enthusiasts. They lived on a remote cape in a national park sand island and valued their natural background and work-life balance.

But before long, the city called, and Sam went to work while Keiran became a stay-at-home dad. With two kids, work pressures, and never-ending bills, nature called again. Change was imminent, and life on the road may have been what this Australian family had been searching for.

For 12 long months, Sam and Keiran searched for the perfect bus they could turn into their permanent home on wheels. They explored various online marketplaces and even started a spreadsheet so they could narrow down their options and discover what they were looking for.

The answer came in the form of a 1998 Hino RG230 with a starliner body. They discovered it on Facebook, and the 12-metre bus named ‘Bronte’ had been working as a school and charter bus in Yea and Alexandra, Victoria, Australia.

Once they made their purchase, the family set about making it a self-contained home on wheels. Fortunately, Keiran had lived on a bus before, so he had a few ideas about how to go about it. They purchased six 300-watt solar panels and installed them on aluminum rails on the roof of the bus.

The panels would offer 1.8kW of solar power, which was fed through a junction box to a power shed under the bus. Off-the-grid living was beginning to look like a reality after all.

Next, the water. Initially, Sam and Keiran planned to create custom tanks for the bus, but pricing led them in another direction. They decided to purchase nine 59-litre containers and link them together to create one sizeable 530-litre tank. These fitted underneath the bus floor above the chassis rail.

Within two years, Bronte the Hino was starting to look like a home, and by October in 2019, they hit the road in search of adventure and a better work-life balance than the one they had previously had. 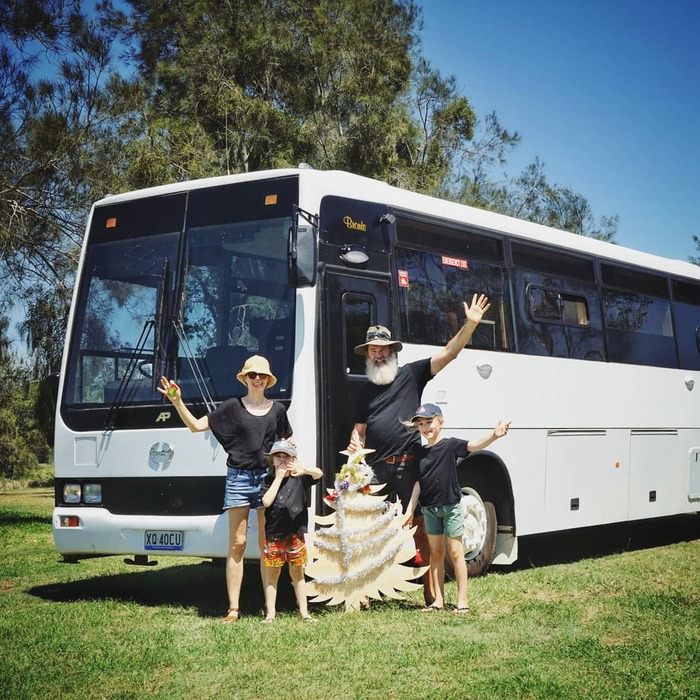 Sam, Keiran, Aubrey, and Ellery purchased a 1998 Hino bus, converted it into a home, and decided to live off the grid. They set off on their adventure in October 2019, with a slight delay caused by the global pandemic, COVID-19. 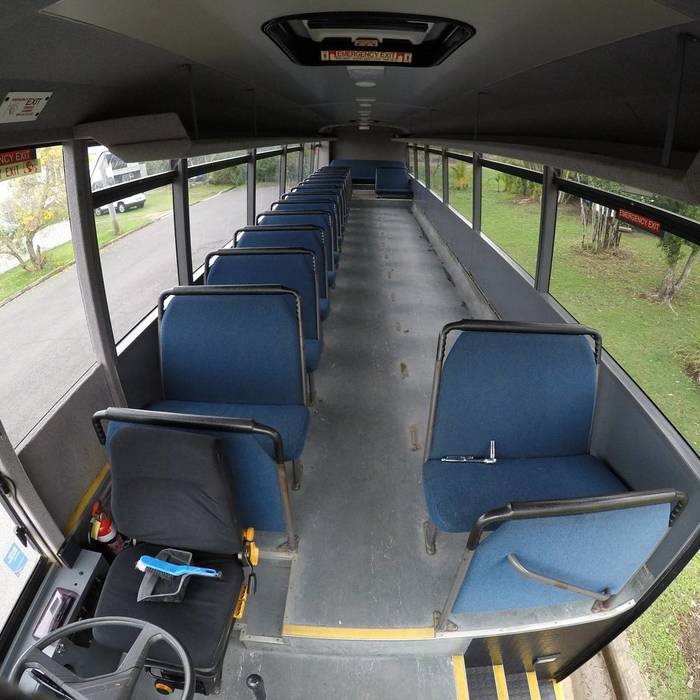 Within one month of owning the bus, they had removed the seats and bag racks of the bus to start envisioning how their home would look. 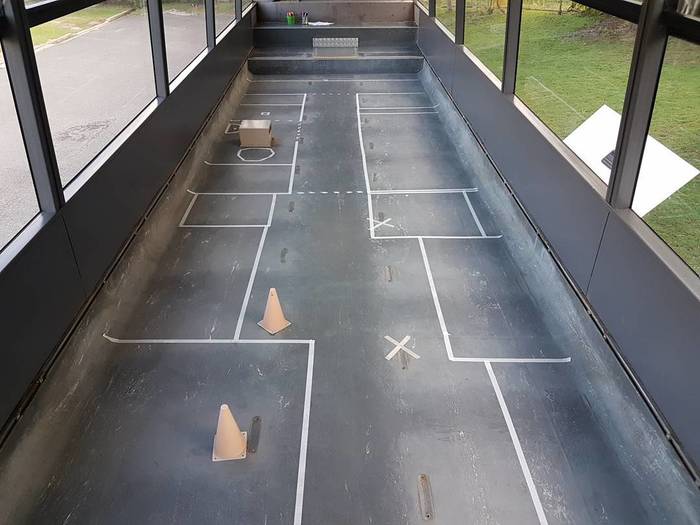 Once all the seats and bag racks were stripped out, they measured the 12-metre by 2.4-metre bus and marked out where things would go. As an empty shell, the bus looked spacious, but it was deceiving.

By the time they factored in sleeping areas for four, a bathroom, kitchen, seats for traveling, and storage, they had to get quite creative with the space. Their goal was for it to be functional and light, but not cramped or cluttered.

Using a 3D floorplan, they mapped out a standard bus conversion layout. The family was able to maximise the available space for play, study, work, and creativity. Because of the inward-opening top hopper windows, they had to be careful with what they placed around these areas. 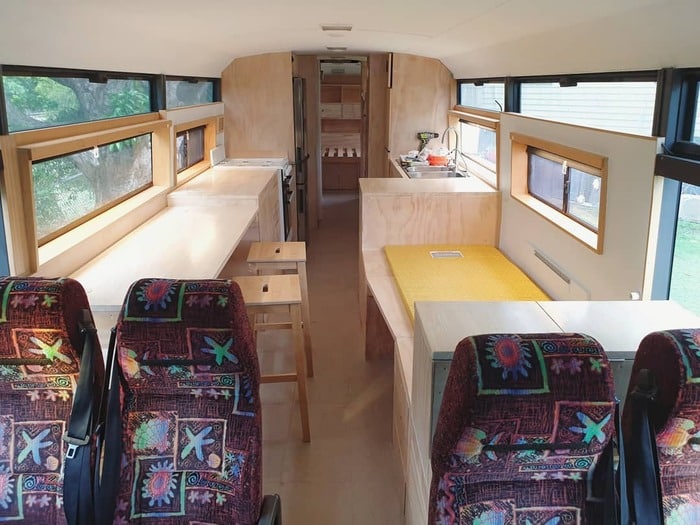 When the family is traveling, they need somewhere safe and secure to sit. They purchased coach seats with lap sash belts from an old Greyhound bus, and these are positioned at the front of the bus in front of the living area. 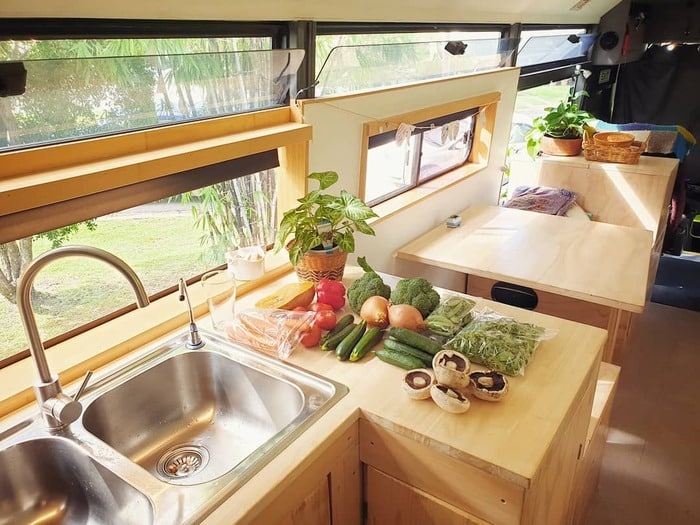 The kitchen is both contemporary and functional. There is plenty of space for meal preparation, and all the necessities you would find in a standard kitchen. 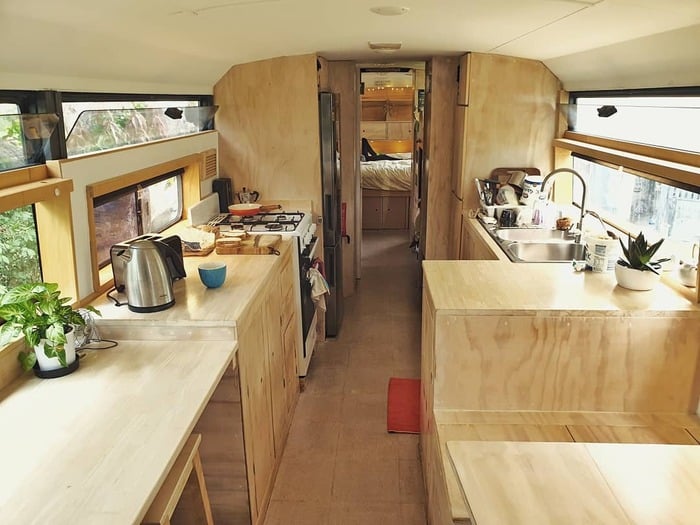 The dining area and kitchen sit adjacent to the living space, and there is plenty of toy storage space underneath. 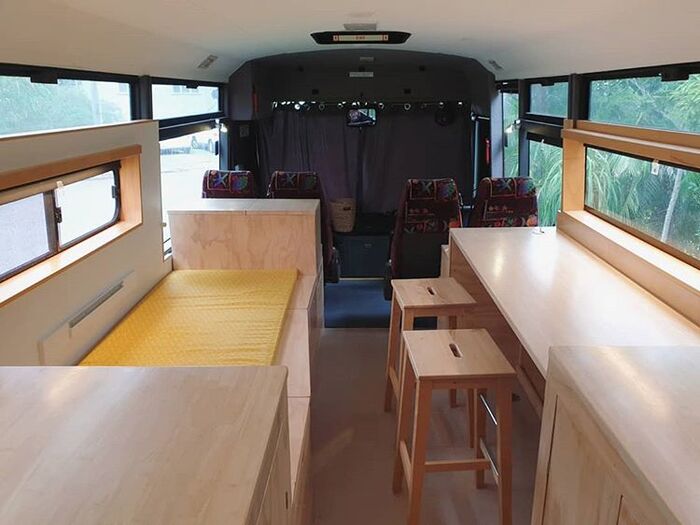 When the dining area isn’t being used for mealtime, it becomes a play area for the kids. 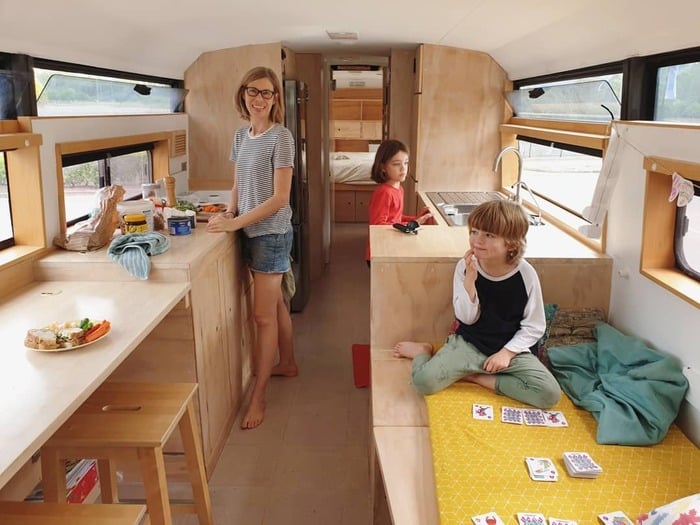 Everyone in the family can be together but enjoy alone time doing various tasks. 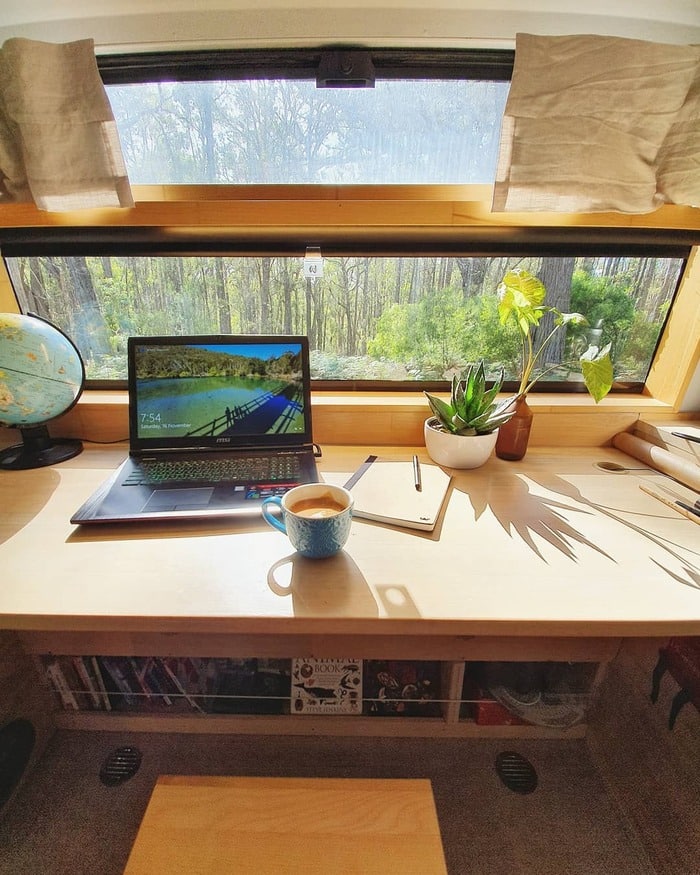 Thanks to built-in storage under the breakfast bar and desk, the bus doesn’t feel cramped or cluttered. 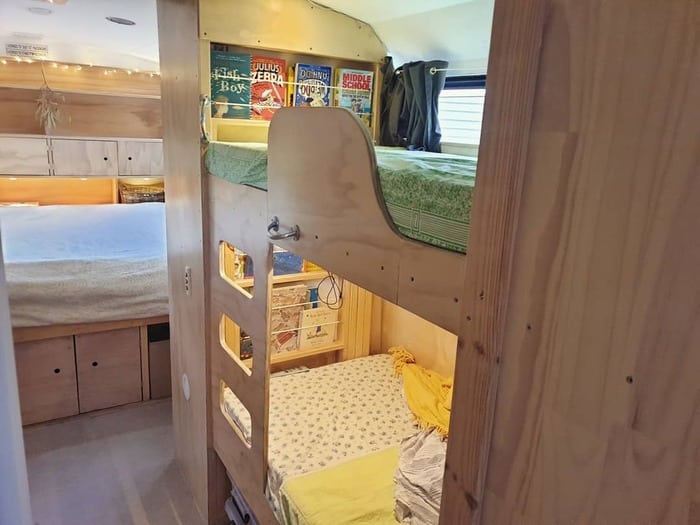 The kids are well catered for with plywood bunk beds adjacent to the master bedroom. 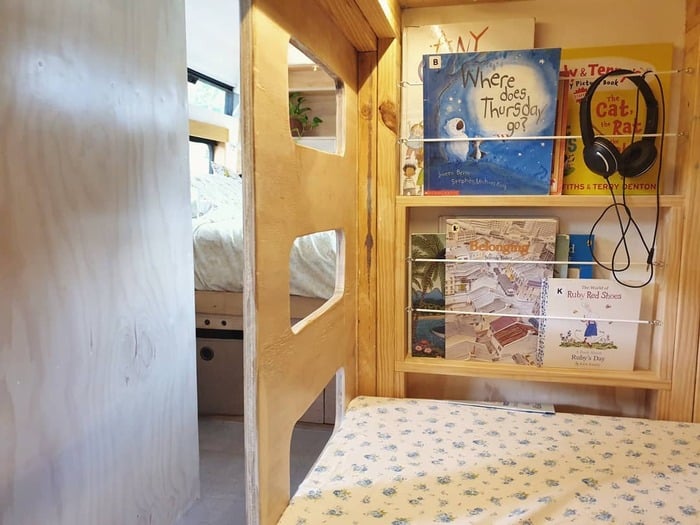 The bunk beds not only give the kids somewhere comfortable to sleep but to relax, as well. They have reading lights, USB charging sockets for their devices, and built-in bookshelves for reading before bed. 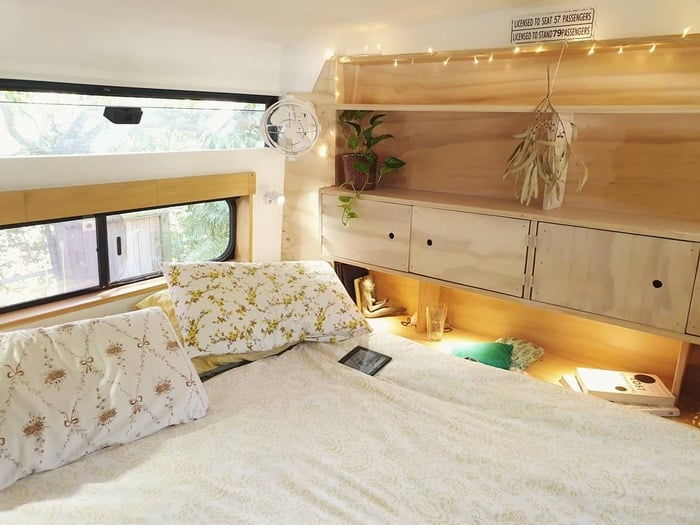 The master bedroom is both practical and serene. It also boasts plenty of storage for mum and dad. 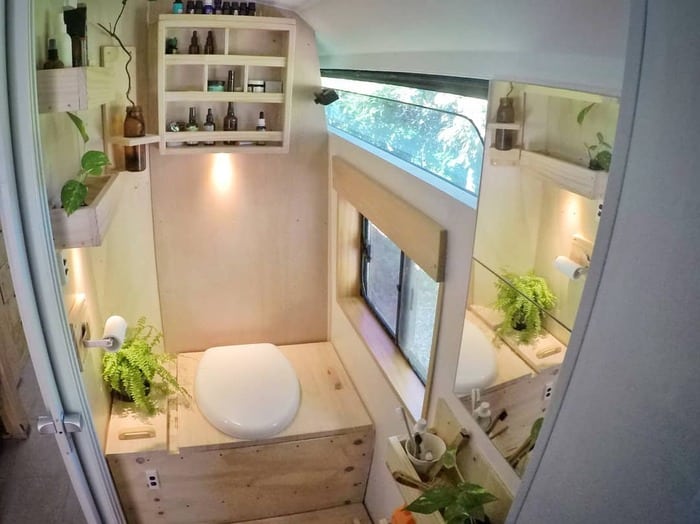 The bathroom is a work in progress for the family, but they are proud of the self-contained setup they have managed to achieve. It features a home-made composting toilet that costs less than $150 to set up. It’s a timber box with a toilet seat, but below is where all the magic happens.

The toilet has a urine diverter underneath, which diverts waste into two solids and liquids tanks. These have base layers of coconut coir in the buckets, and more are added after each use. An extraction fan runs non-stop but is whisper-quiet.

Commercial composting toilets have a hand-cranked mixer, but their setup is not quite that advanced. While they may upgrade in the future, Keiran currently turns the “compost” with a garden trowel.

Due to widespread travel restrictions from COVID-19, the family rented a remote property near Charleville until restrictions were lifted.