As most Americans know, living in Los Angeles is expensive. So, when Californian couple Christine Saldana and Kathy Mariscal decided they wanted to get married, they knew it wouldn’t be cost-effective to save for a wedding and live in LA.

At the time, the couple was living in separate apartments paying a combined total of $4,500 each month in rent. To save money and plan for their future, they decided to purchase a 1988 Crown Coach school bus for $7,500 and transform it into a house on wheels. Their journey with ‘Adelita’ the bus began in June 2020, and they’ve been on an adventure ever since.

As soon as Adelita arrived, Christine and Kathy got straight to work, pulling out all the chairs and designing their new home from scratch. They knew they wanted to live on a bus, but they also wanted it to feel like an actual house. Once their design was complete, they hired professionals to take care of all the necessities of life, such as plumbing, electrical, wall framing, gas lines, and essentially all infrastructure. Their family in a furniture business helped them custom-make most of the furniture that now takes pride of place in Adelita.

By the time Adelita was finished, the pair had spent an estimated $50,000 creating their 27.7-square-meter dream home, including the original bus price tag. Not long after, a job opportunity in Houston, Texas, saw the pair taking Adelita on her maiden voyage, which allowed them to explore Arizona, New Mexico, and other parts of the country before landing at their final destination in an RV park in Houston in October of 2020. Rather than paying $4,500 per month for rent as they did in LA, they now spend just $800 for their lot.

While their full-time jobs don’t allow them to travel the country just yet, they have huge plans to take time off, visit national parks, and explore their backyard while preparing for retirement and life on the road. According to Christine and Kathy, Adelita will always be their first and last home. 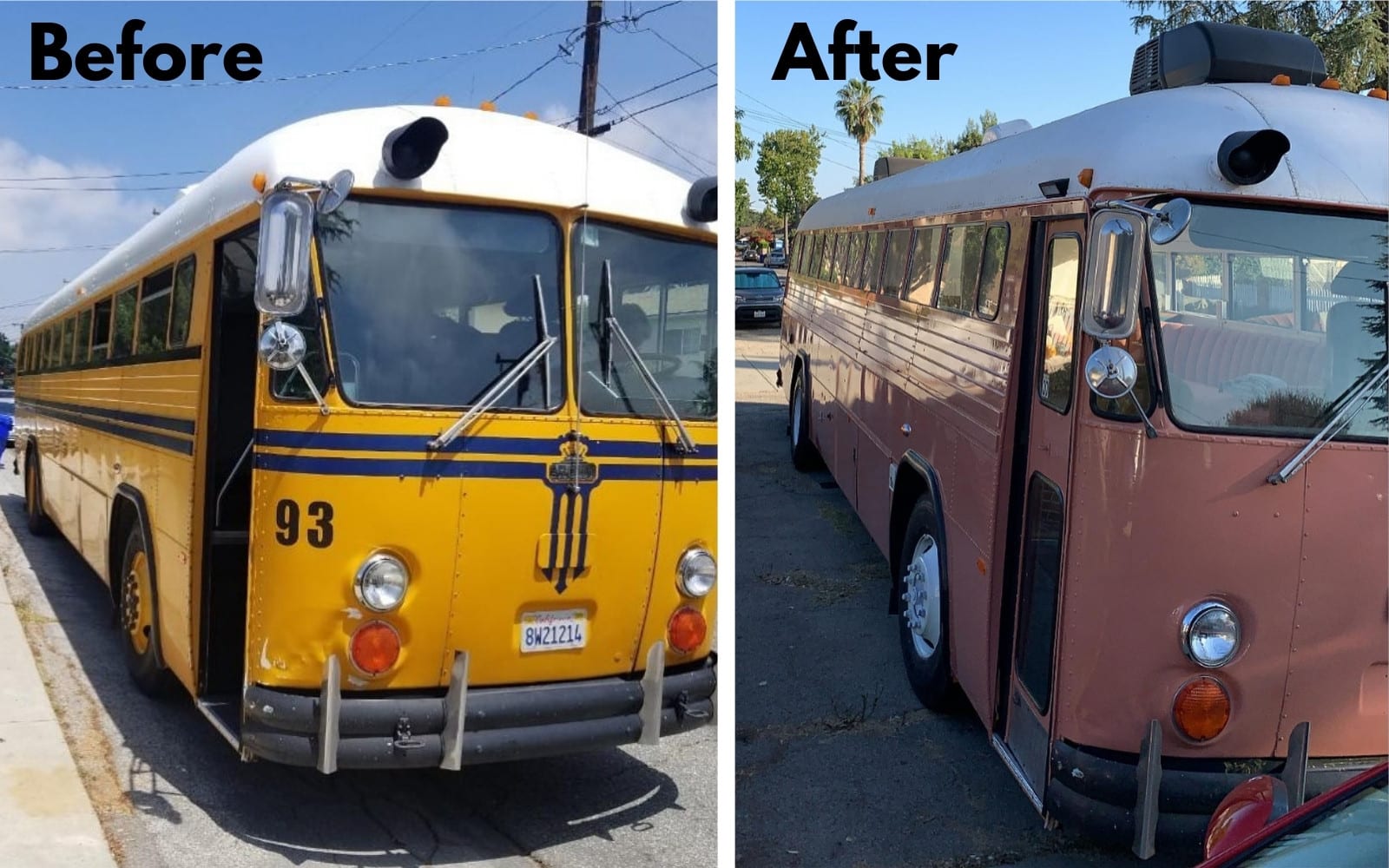 Kathy Mariscal and Christine Saldana purchased a 1988 Crown Coach school bus for $7,500 and transformed it into their house on wheels named Adelita. One of the first tasks on the list was getting rid of the vibrant yellow school bus color. Kathy wanted pink, and Christine wanted blue, so they settled on coral, which matches their mid-century style sofa. 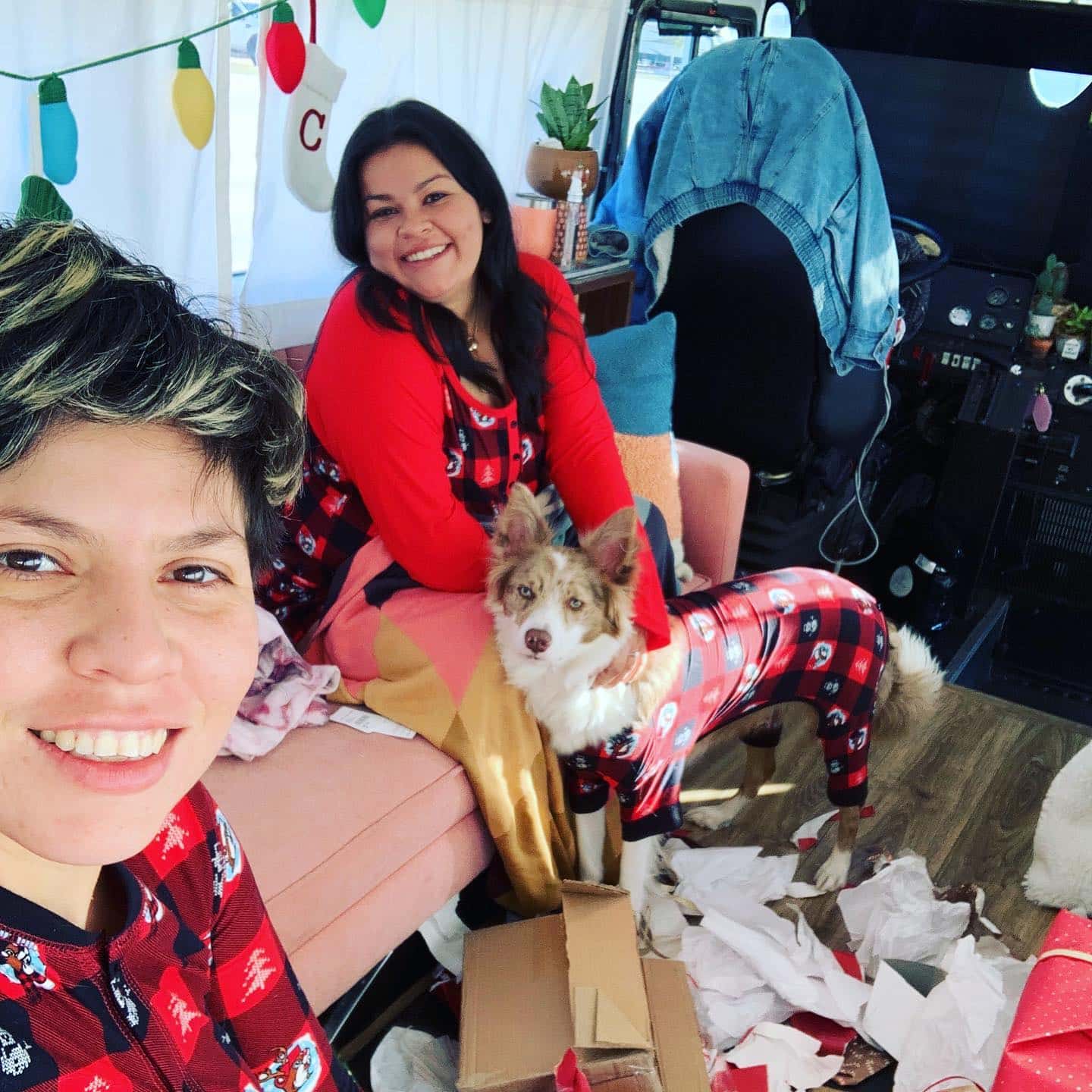 Christine Saldana and Kathy Mariscal (pictured with their dog Lolita) lived in Los Angeles, but high living costs and the desire to save for a wedding saw them consider alternative living arrangements to save money. 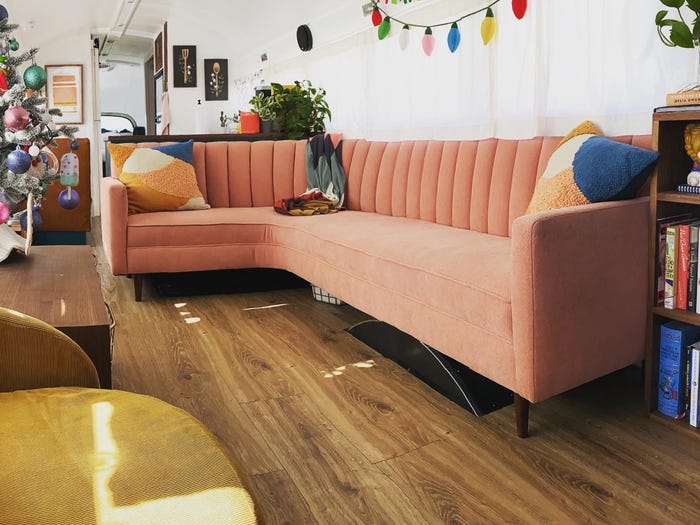 The coral-colored curved eight-foot sofa to the front of the bus is a focal point in Adelita the school bus. Christine’s sister and brother-in-law own a furniture company and custom-made it just for the bus. To the fore, you will also spot a yellow corduroy co-captain chair which can swivel toward the living area or cockpit.

A house isn’t a home without plants, and Kathy and Christine have plenty of vibrant green house plants throughout their home on wheels. 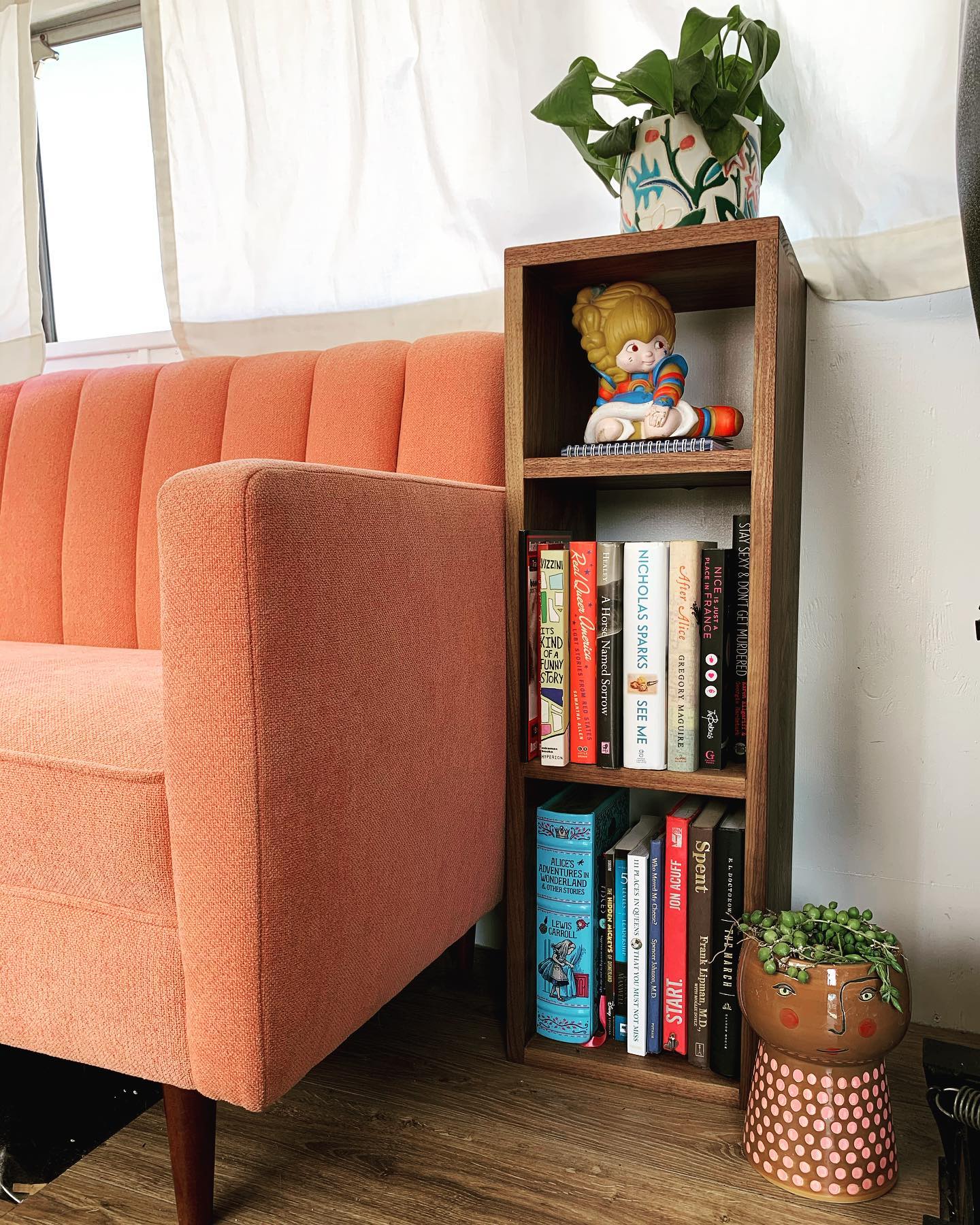 Storage is essential in any home, and a bus is no different. A beautiful natural wood bookcase takes pride of place next to the custom-made coral mid-century sofa in the living space. 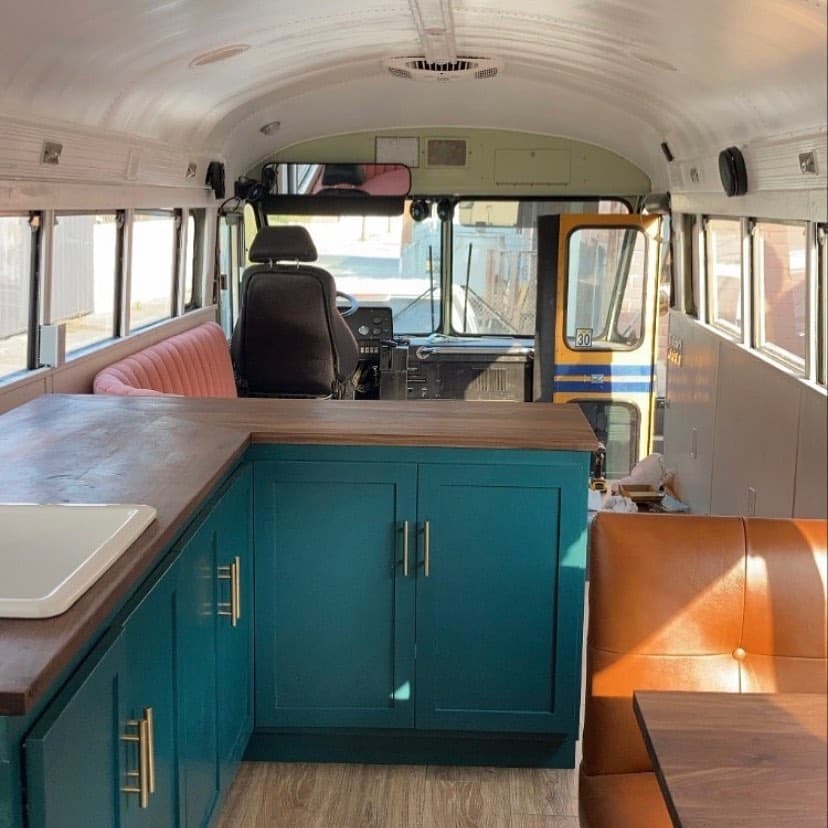 The kitchen is simple yet striking with vibrant teal cabinetry, a walnut countertop, and gold handles. They sacrificed upper cabinetry for a more open look. Kathy does most of the cooking and uses a crockpot and hot plate for most of their meals, rather than relying on a stove or oven. There is also a full-sized refrigerator and a sink, which you’ll find in any standard home. 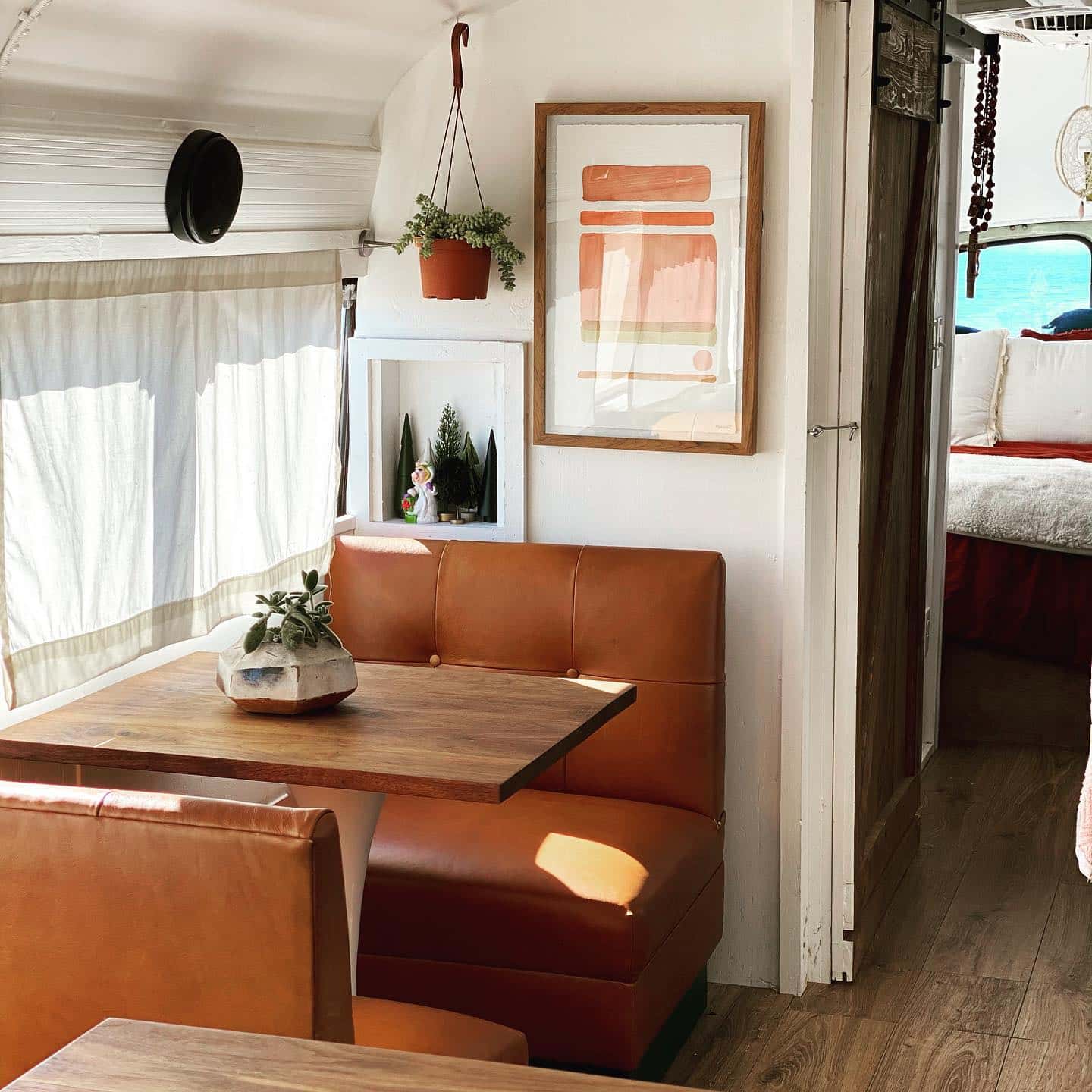 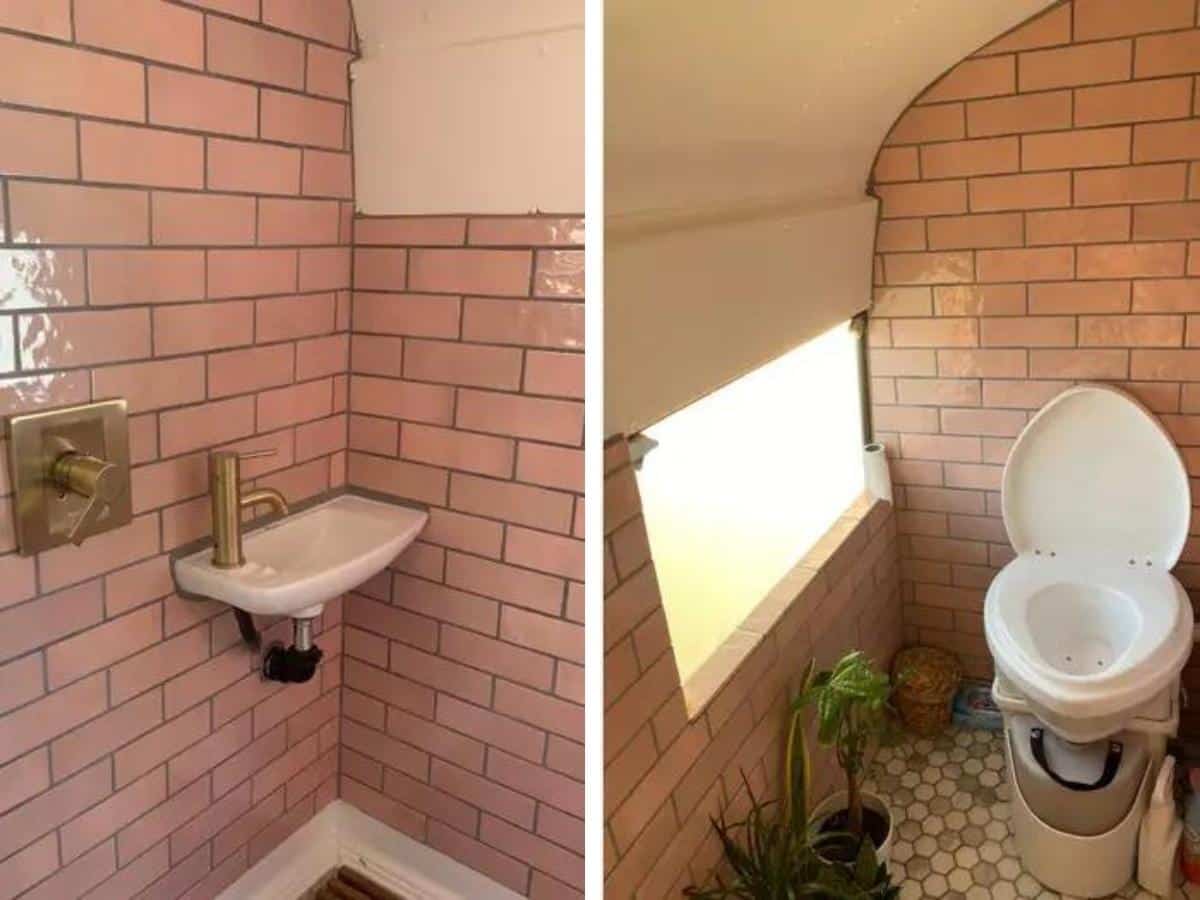 The bathroom is reflective of days gone by with pink porcelain tiles and marble flooring. There is also a small sink with a gold faucet and a compost toilet. While there isn’t a dedicated shower, the entire bathroom is waterproof and has a showerhead installed. 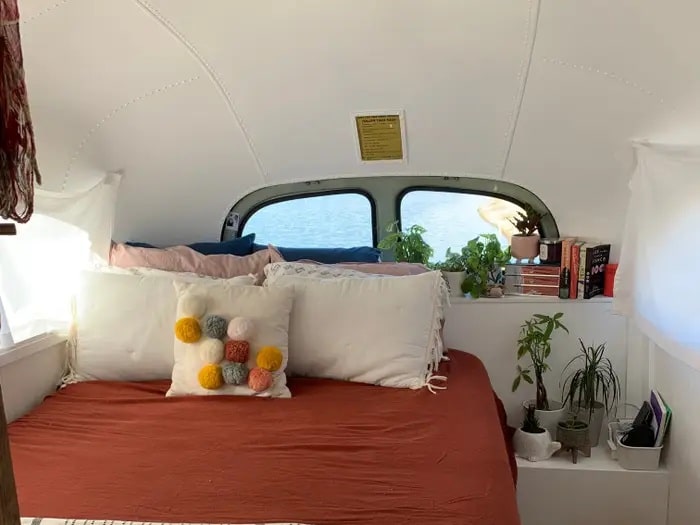 Kathy and Christine’s bedroom is located in the rear of the bus in around 5.5 square meters of space. There’s just enough room for a queen-sized mattress and nightstand, but the area sees plenty of light courtesy of the ample windows and white color scheme. 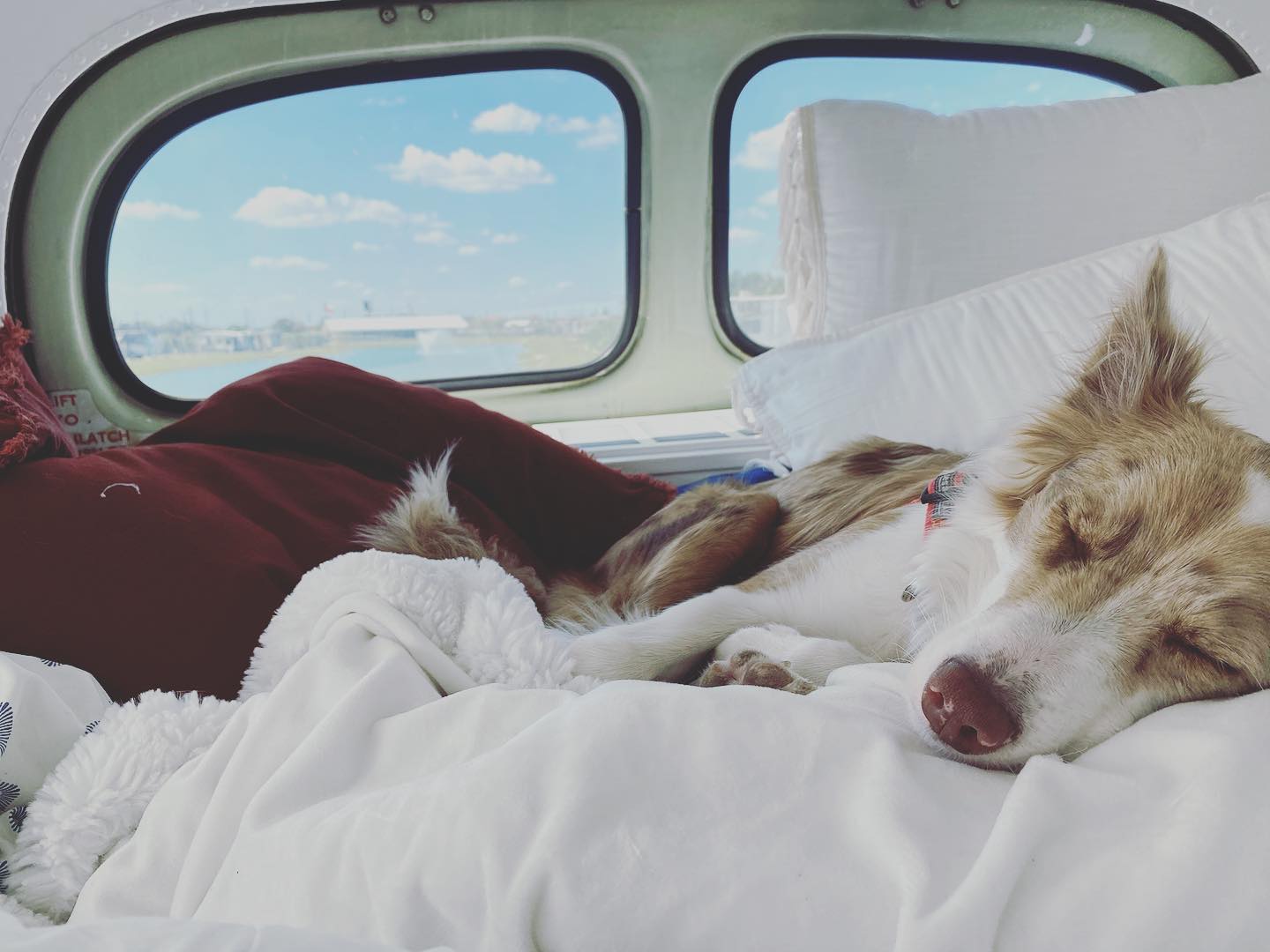 The rear of the bus still retains its original emergency exit. Their bedroom is also where Lolita likes to while away the hours.

Take a quick guided video tour of the stunning skoolie