Most tiny home and motorhome renovations have a story, but perhaps not nearly as exciting as that of August Hausman’s restored 1968 Airstream Land Yacht. August Hausman’s father, interior designer Shawn Hausman, received the Airstream as a birthday present from his own father, a film producer. His dad owned the Airstream for a while and even lived in it when he was working on projects. However, for the last ten years, it sat rotting away – a mere shell of its former self. Well, that was until August got his hands on it. 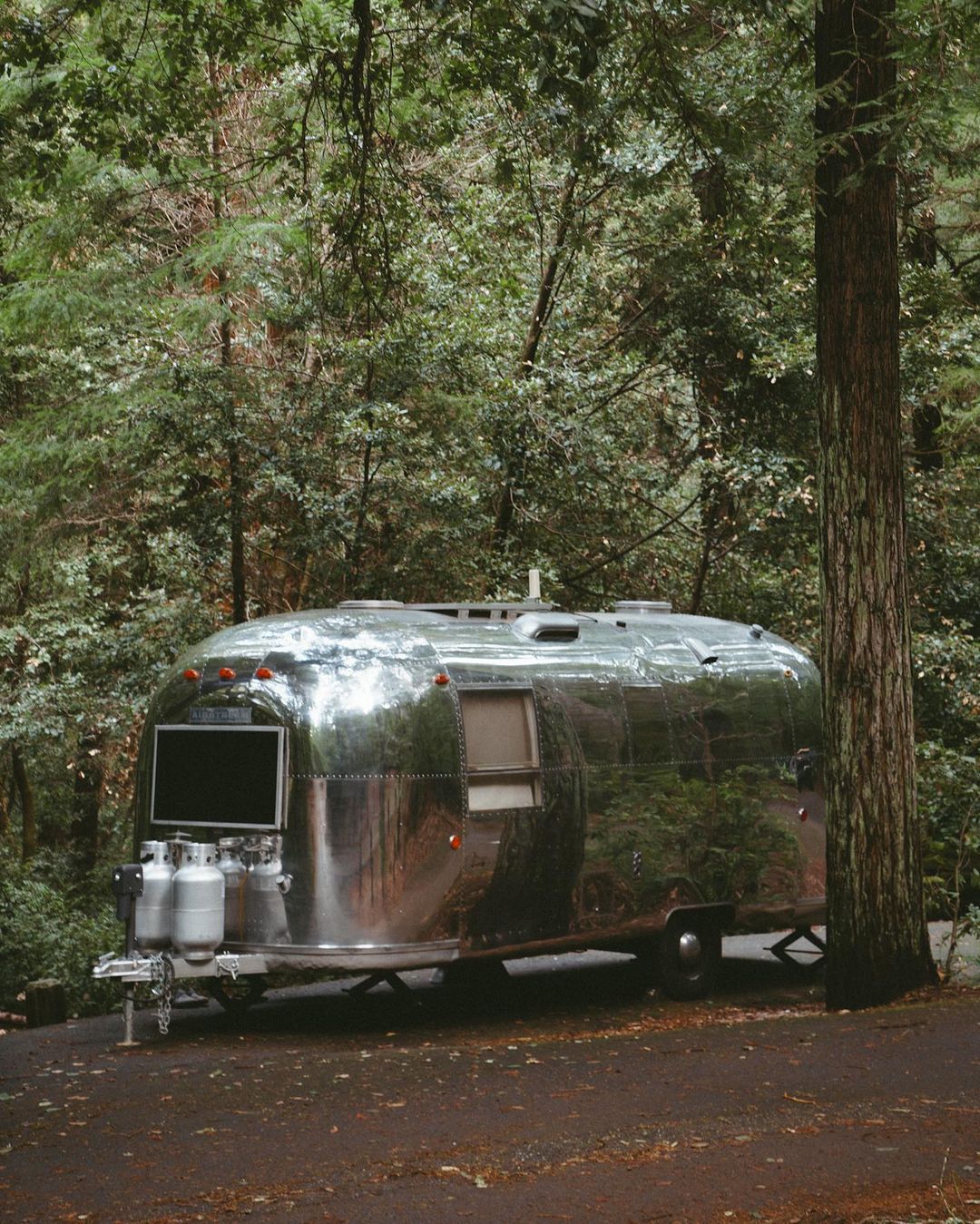 The now-dazzling Airstream has undergone a complete transformation, courtesy of musician and interior designer August Hausman. August’s dad didn’t have plans to do anything with it, so the young musician asked if he could take it off his hands. Initially, he wanted to fix it up and make it a rental, but he fell in love with the travel trailer and decided to make it his home. Not including his own labor, August ended up spending $25,000 transforming it into the beautiful Airstream you see today. 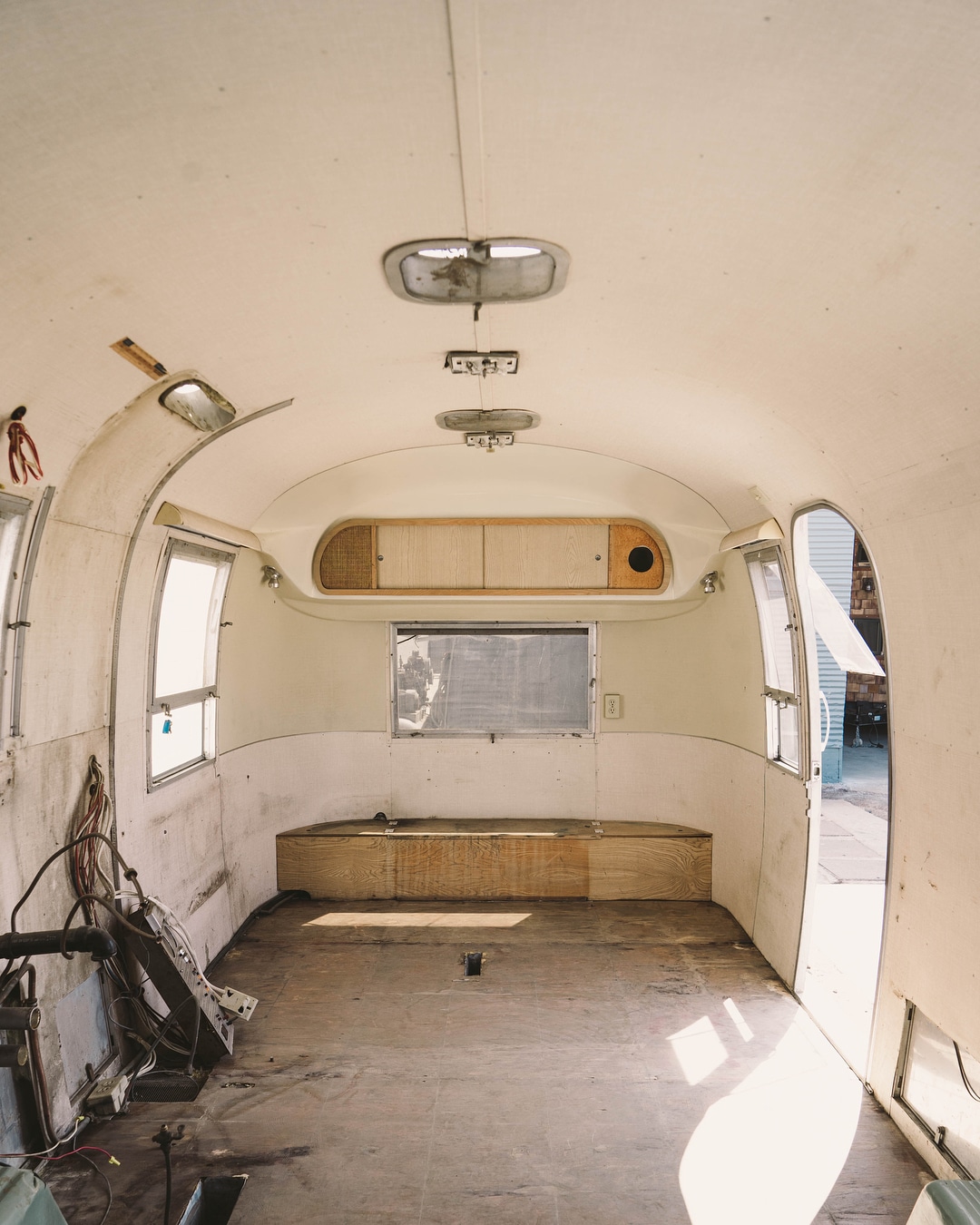 The first task on August’s list was gutting the interior. This process included removing the paneling and subflooring until it was a bare bones trailer. He then transported it to his friend’s tiny home shop in Ventura, California, where he was able to borrow tools. August’s goal was to make it feel like an old Airstream, but with a new face. He settled on a single wood tone, walnut, paired with white. 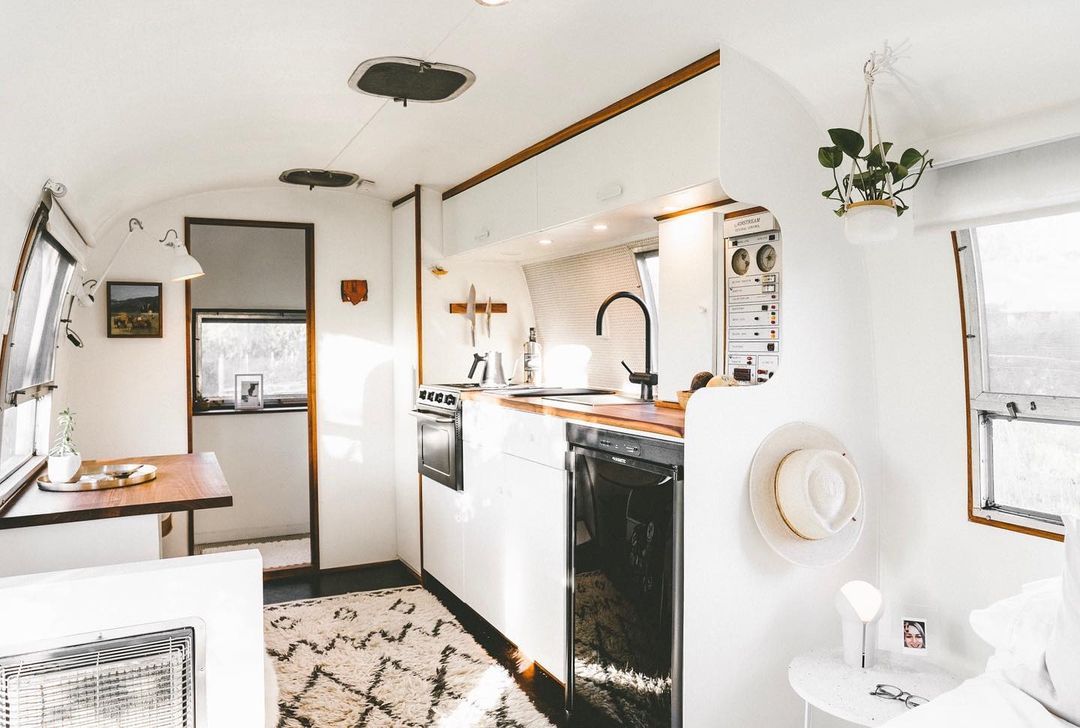 The white and walnut interior is simply beautiful and enhances the interior space, which measures seven feet wide, 19 feet long, and seven feet tall. The kitchen countertops, wall trims, and table all feature dark walnut, which partners beautifully with the clean white. August built the cabinets himself and fitted them with Pierre Charpin-designed porcelain knobs. 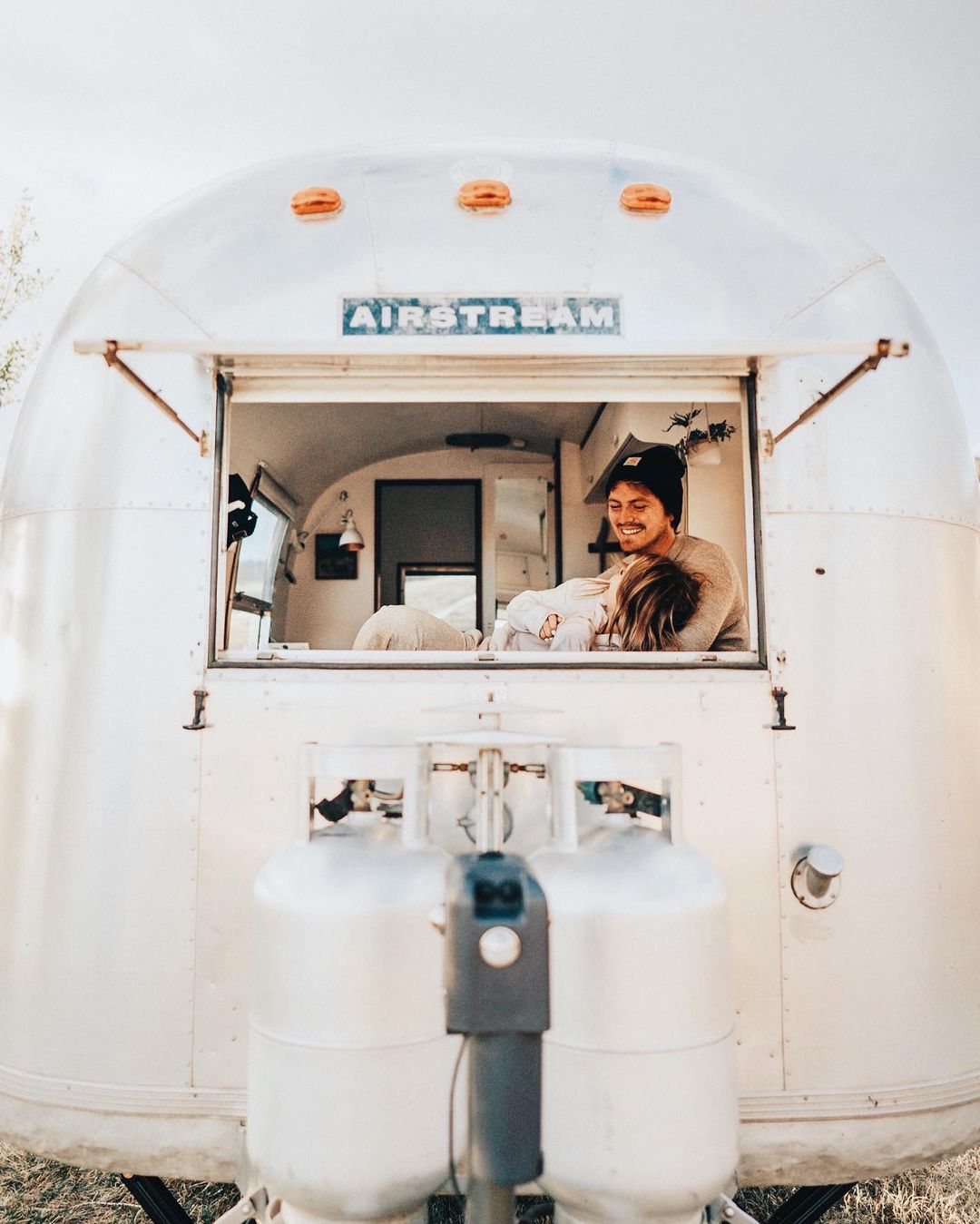 August has spent two years living in what he calls the ‘Airstream Haus’. He says it’s challenging living in such a small space but is definitely worth it. 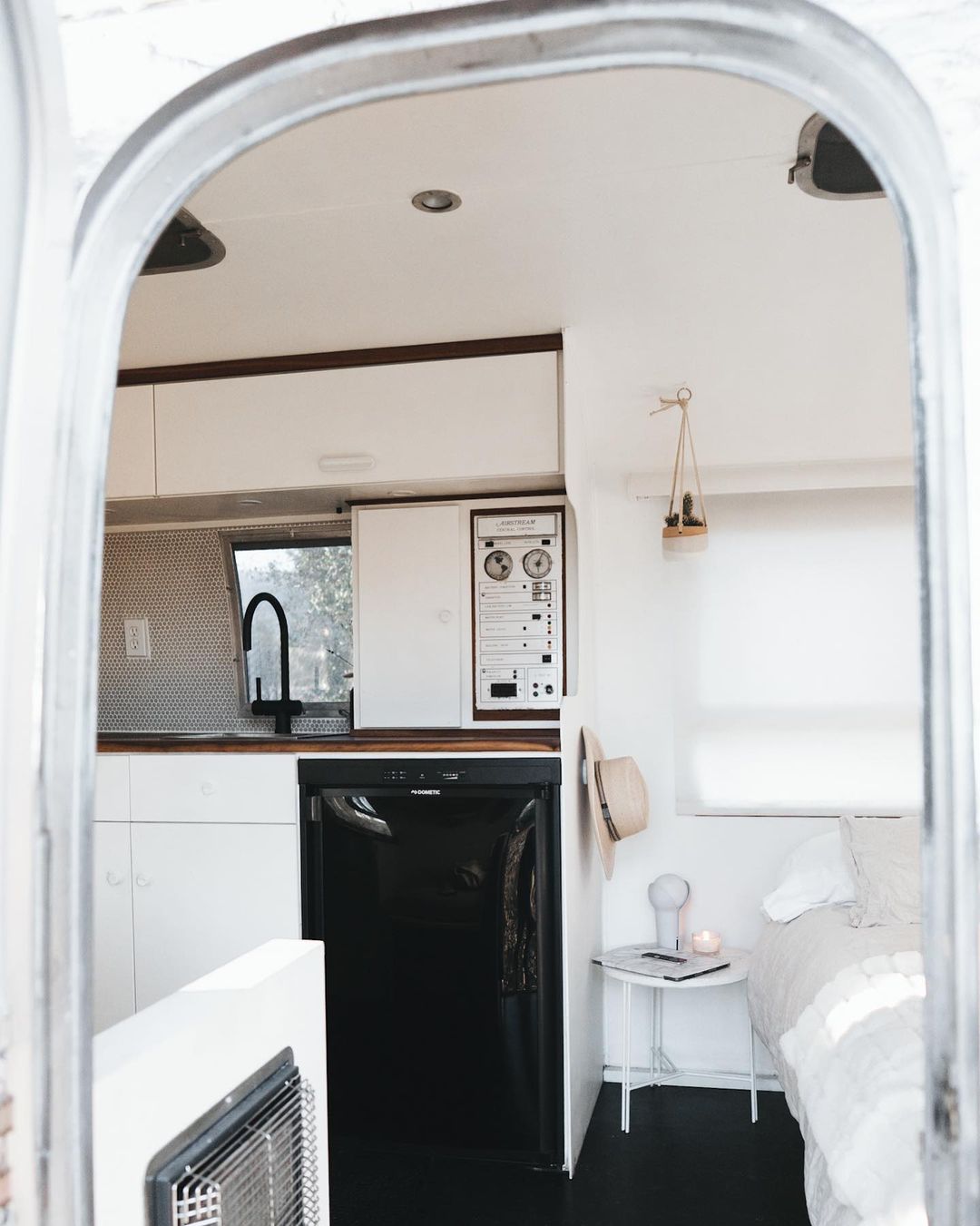 The entrance to the Airstream is light, bright, and welcoming. The kitchen is centrally located, and the bedroom area is adjacent. 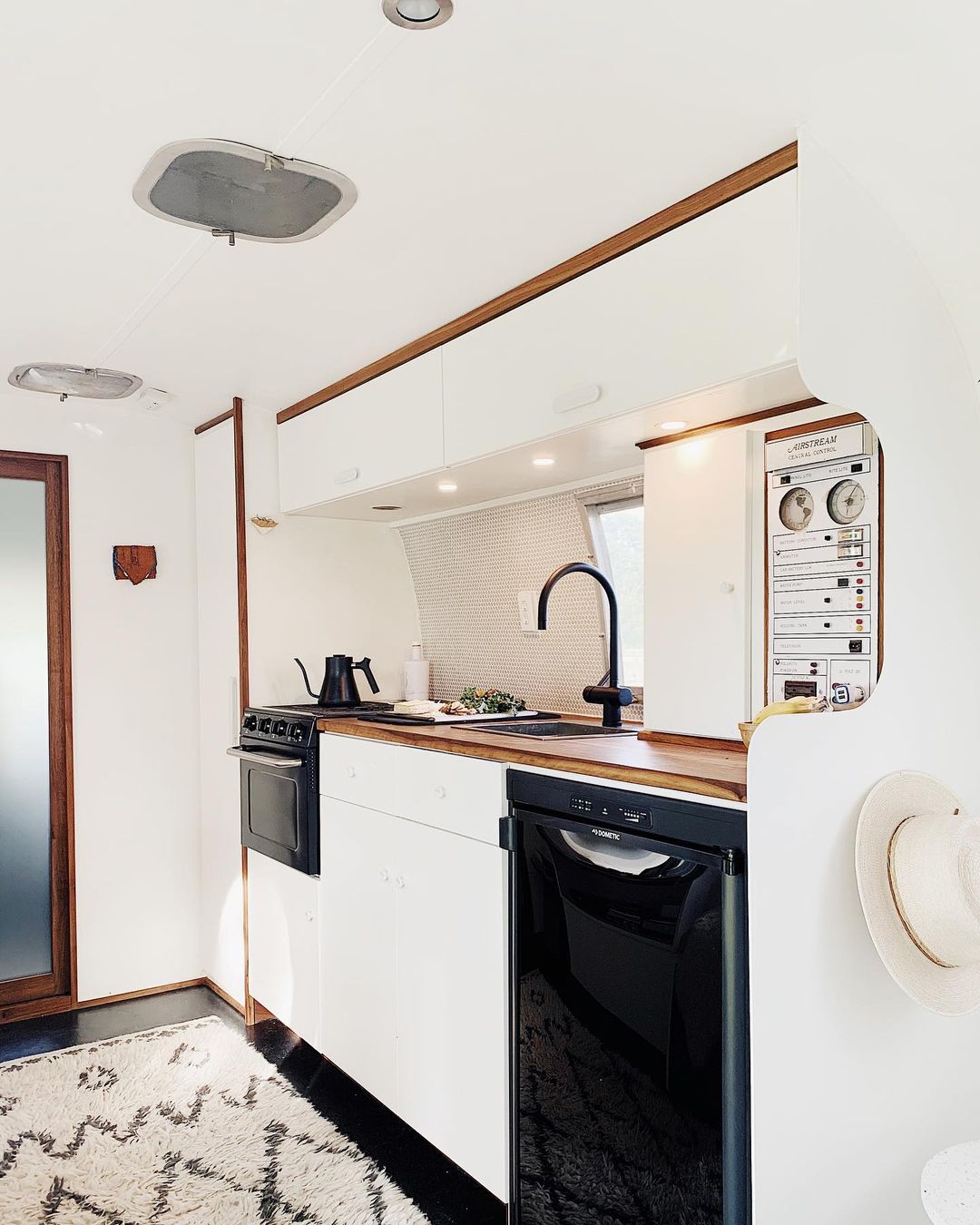 The kitchen is fully equipped with everything August needs. It has a three-way Domatic to run on AC, battery, or propane, and the interior designer restored the Airstream’s original control panel. He configured it to have convenient control of water pumps, tanks, and electricity. He also upgraded all systems like batteries, inverters, and converters. August was hesitant about using tiles as the backsplash behind his stove, but he’s been pleased with the finish. He has traveled thousands of miles with no problems. However, he made sure he chose small ceramic tiles with mesh backing and tight grout lines for extra support. 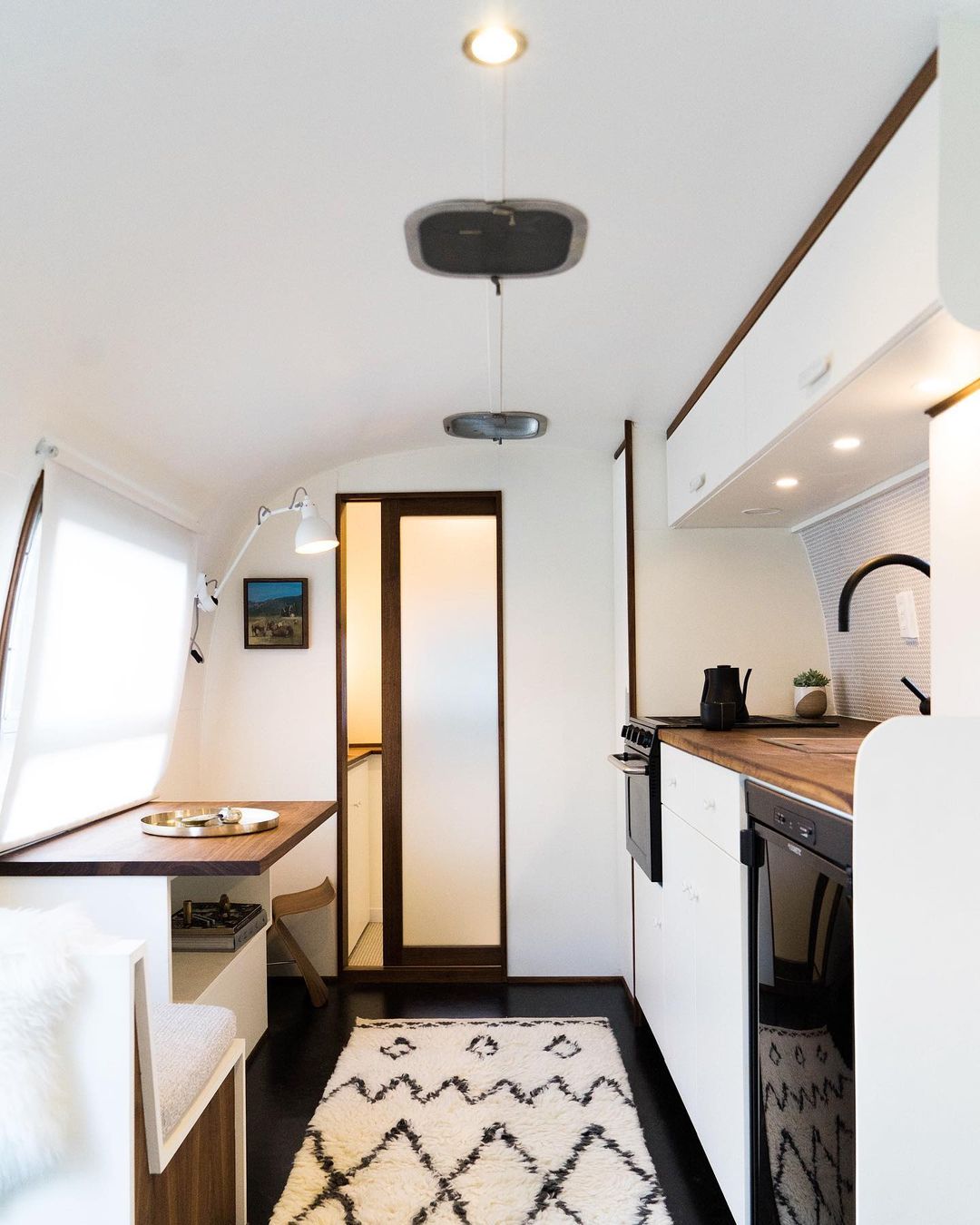 Originally, the dining area held a second bed. August turned it into a dining area with a gorgeous oak table that hides the wheel well. The entire space, with its few colors, looks clean, functional, and modern. 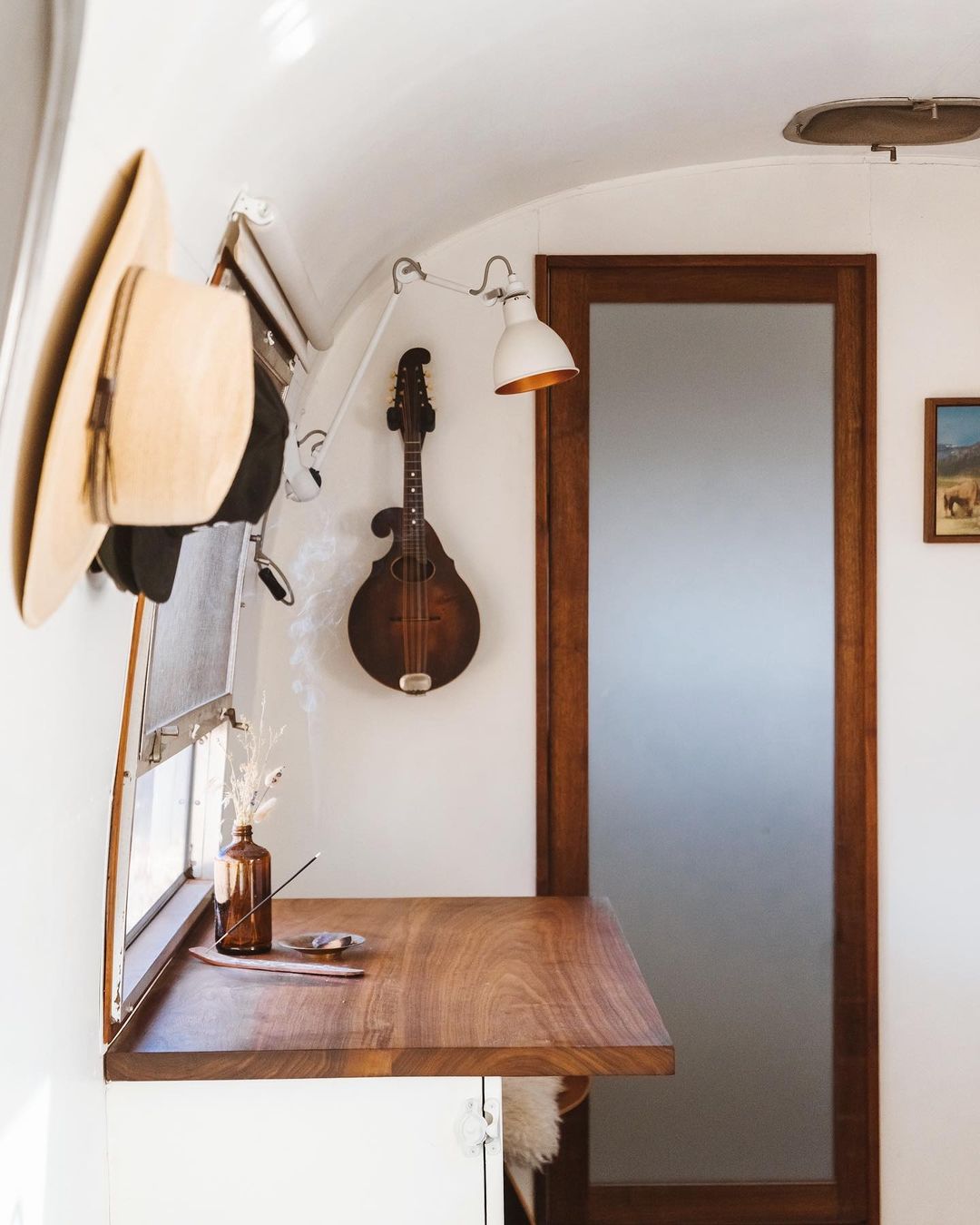 The living area enjoys plenty of light, courtesy of the opaque glass on the sliding bathroom door. 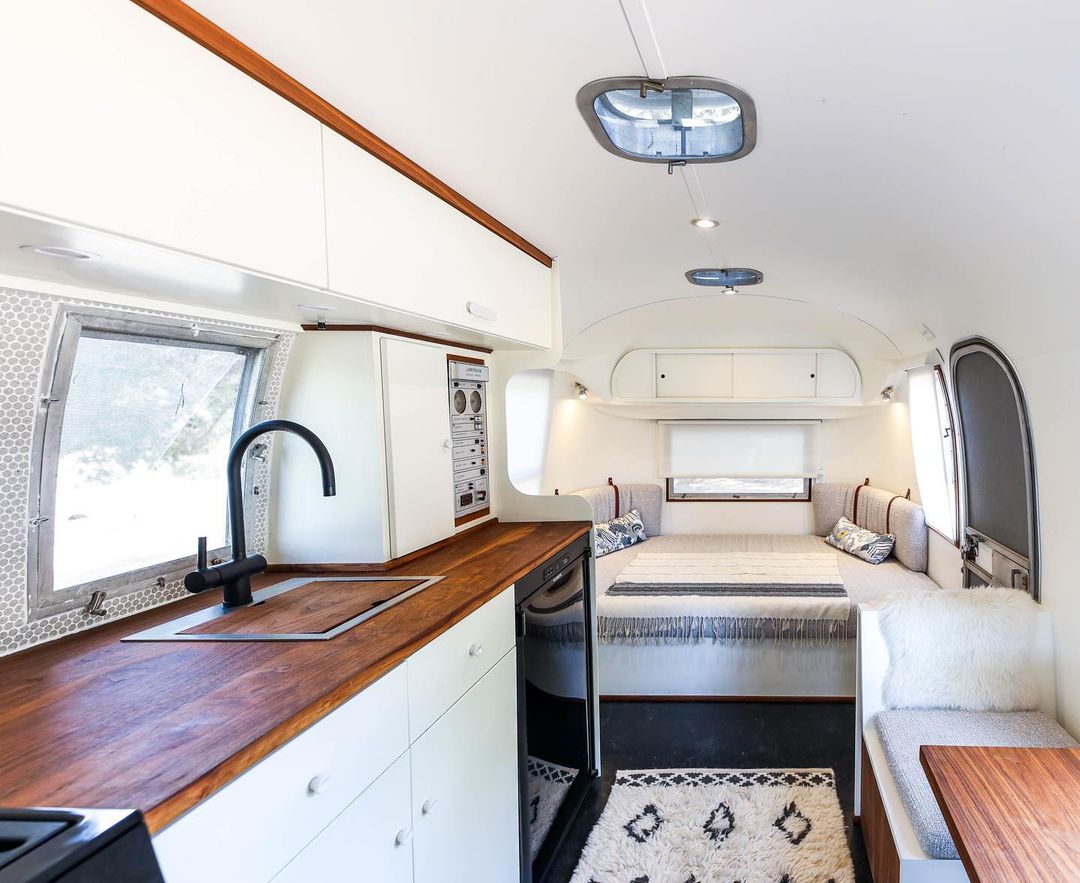 As August’s Airstream is not as long as other models, at just 23 feet long, it doesn’t have a separate bedroom. August turned the daybed in the original setup into a sofa that converts to a queen bed at night. It has plenty of storage underneath for linen, and the back features the water holding tank. The sleeping area is modern and fresh thanks to custom Hermes accent pillows and upholstery from Diamond Textiles. 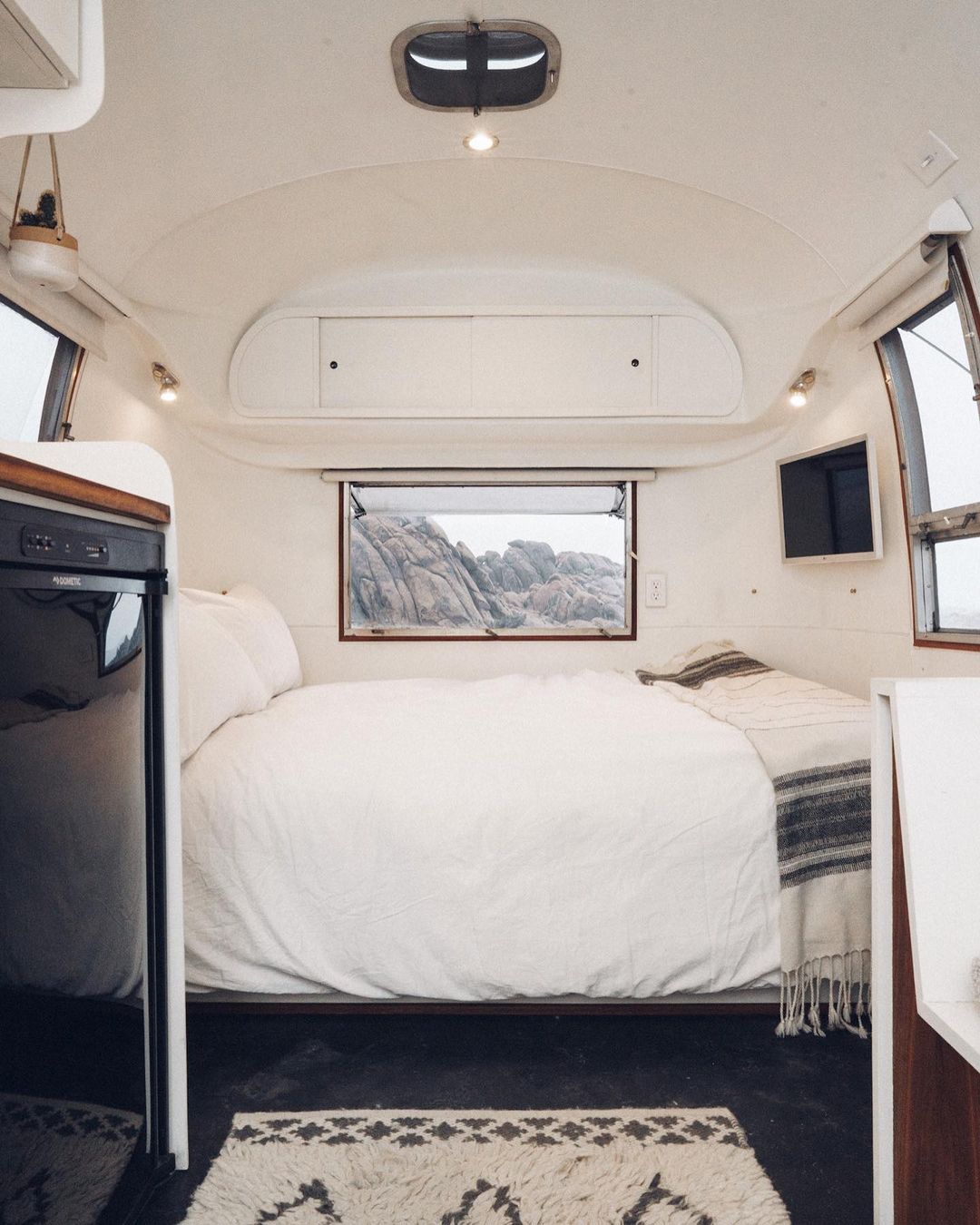 The daybed looks nothing like its former self once it’s converted into a queen bed. Windows on each side let in plenty of natural light, and there are storage cupboards positioned above the bed for convenient access. 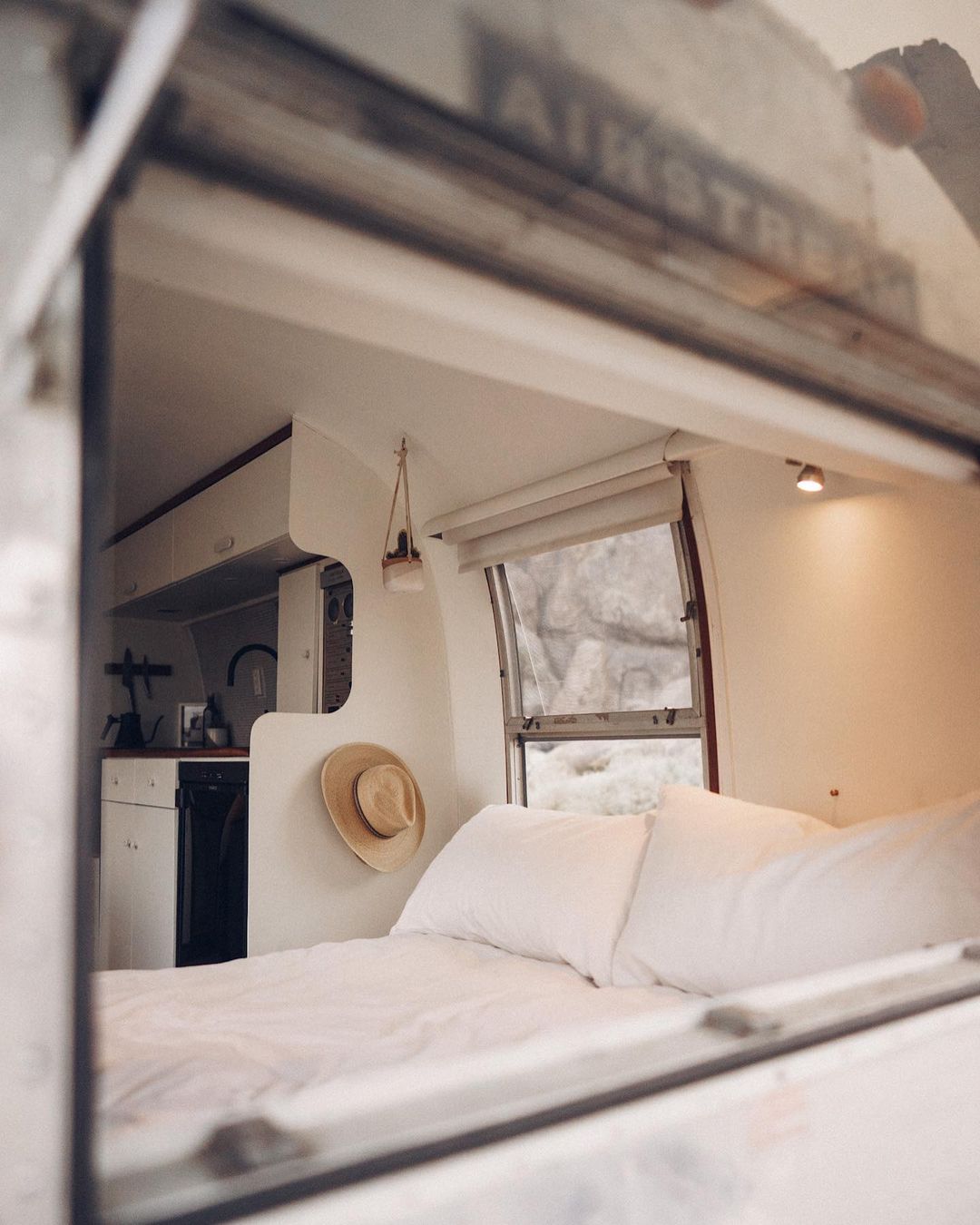 The rear window of the Airstream opens to let in the fresh air. This is a welcome feature during the warmer months of the year. 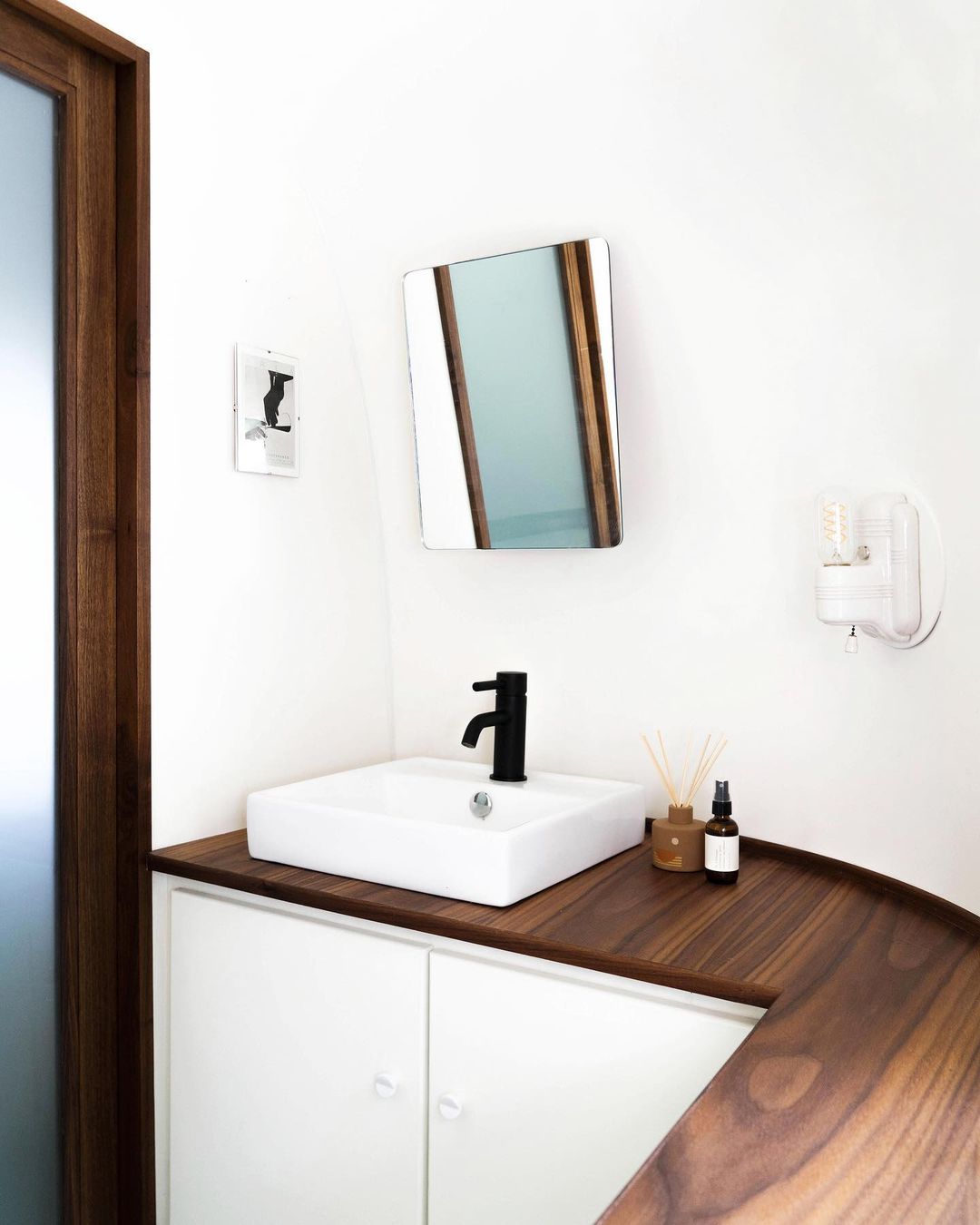 August was concerned about the minimalism of the bathroom and spent a lot of time reminding himself about quality over quantity during the design phase. He opted for a custom walnut countertop that curves along the Airstream’s edges, paired with a modern sink. The bathroom also has a lovely antique sconce from the 1930s and a sink faucet from Italian company Zucchetti. All cabinet door pulls are made of porcelain and are the same as those present in the kitchen by Pierre Charpin. 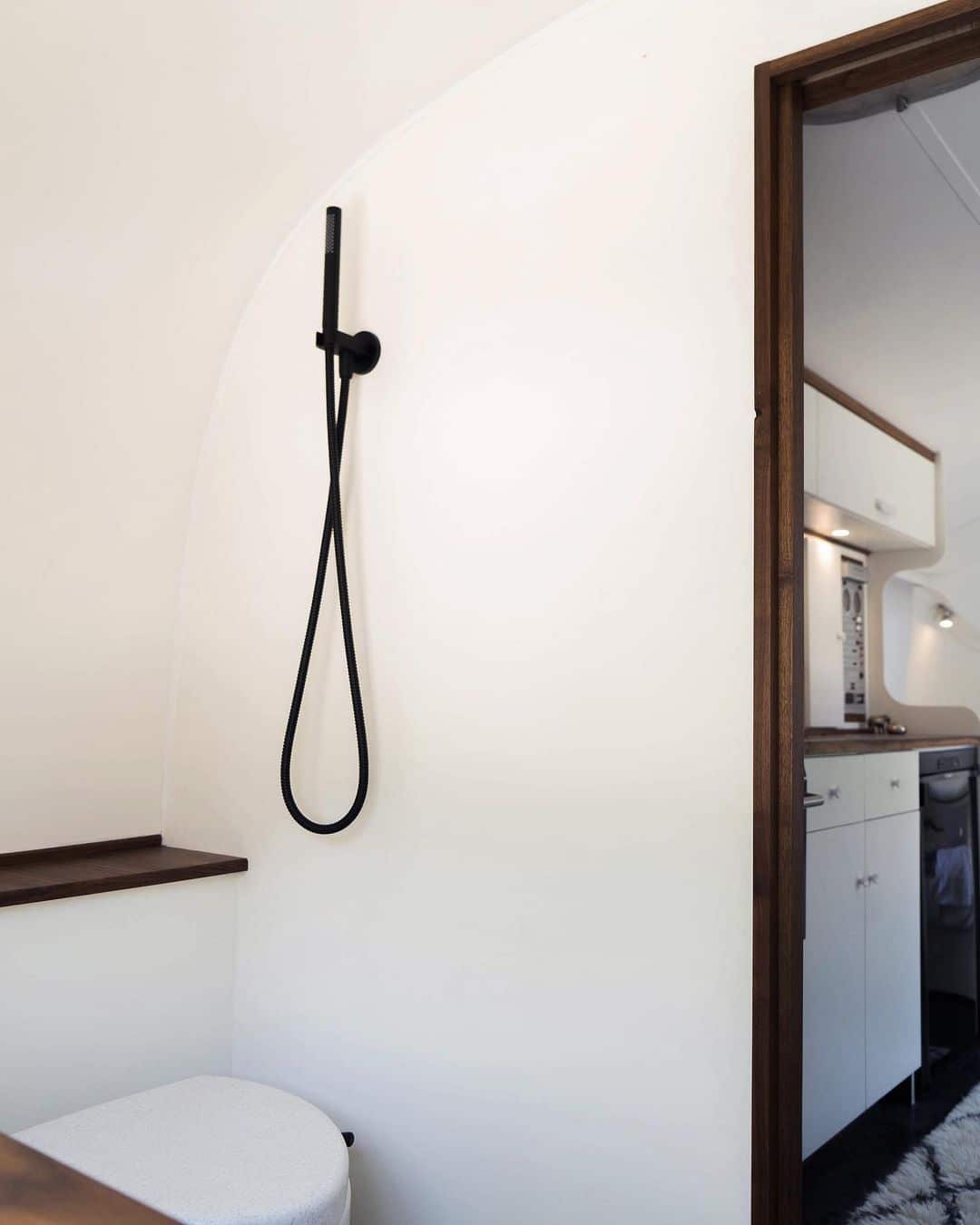 The original Airstream had a fiberglass sink and shower combination. August replaced it with an open shower and Natures Head composting toilet. He is able to drain the grey water tank to a nearby garden. All walls and counters are waterproof, and the floor is tiled and sloped towards a drain. If you want to know more about August’s Airstream life, you can follow him on Instagram @airstreamhaus