Single mom built spectacular tiny home for herself and her daughter

In 2015, single mom to a daughter and graphic designer Shalina Kell decided she was tired of high-rent apartment life in the California Bay area. So, she moved to her father’s country property in West Sacramento and lived in a travel trailer with her daughter while building a tiny house on wheels. 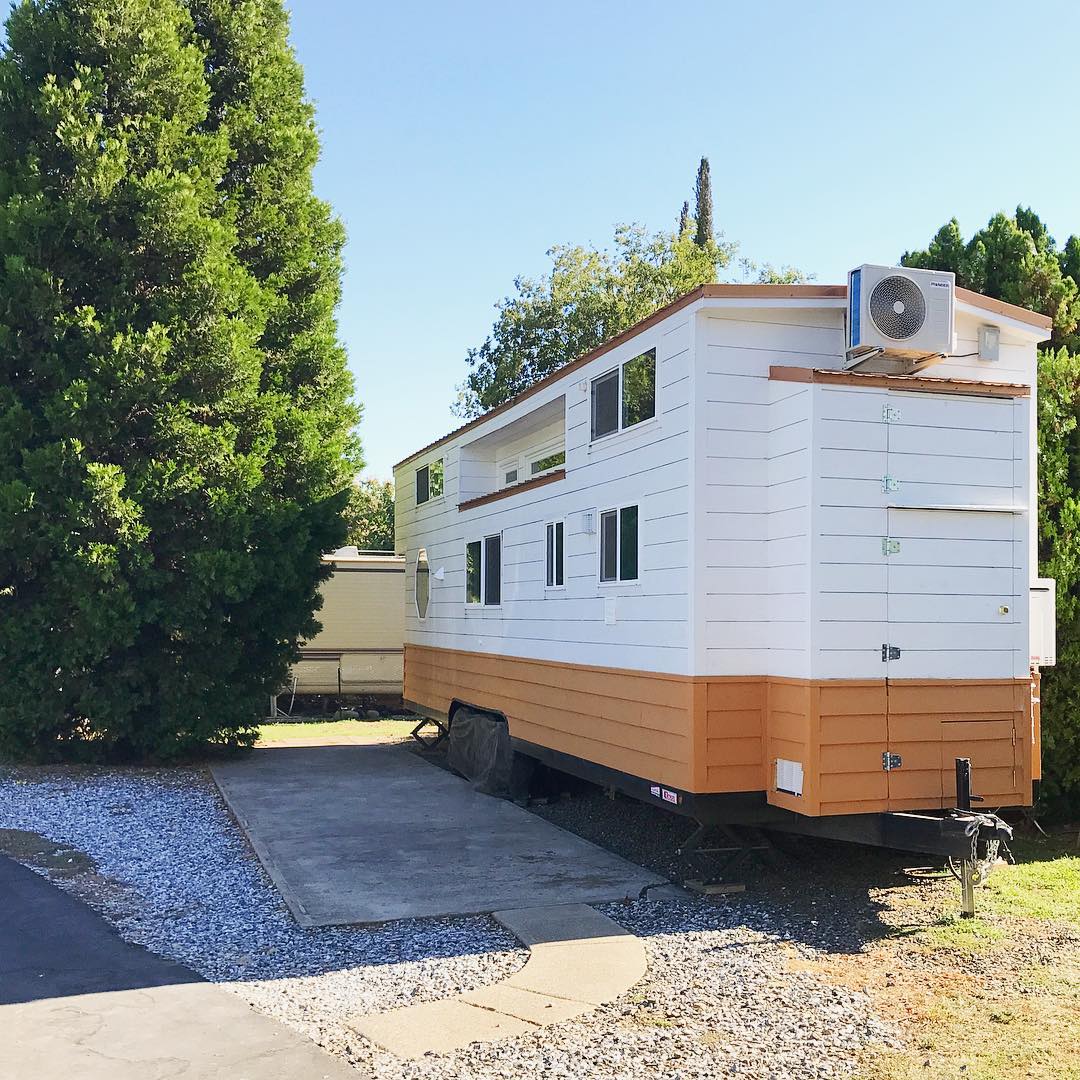 Shalina had been inspired by TV shows like George Clarke’s Amazing Spaces while also being influenced by her contractor father and gaining inspiration from Pinterest. Two years of planning, designing, and building, resulted in a beautiful tiny home that Shalina and her daughter parked in an RV park in Folsom, California. There, they lived for three years and enjoyed being able to travel, be more financially free, and spend more time together. Eventually, Shalina moved in with her fiancé and their two children. She now has plans to use her tiny home as a creative space and, eventually, an AirBnb. 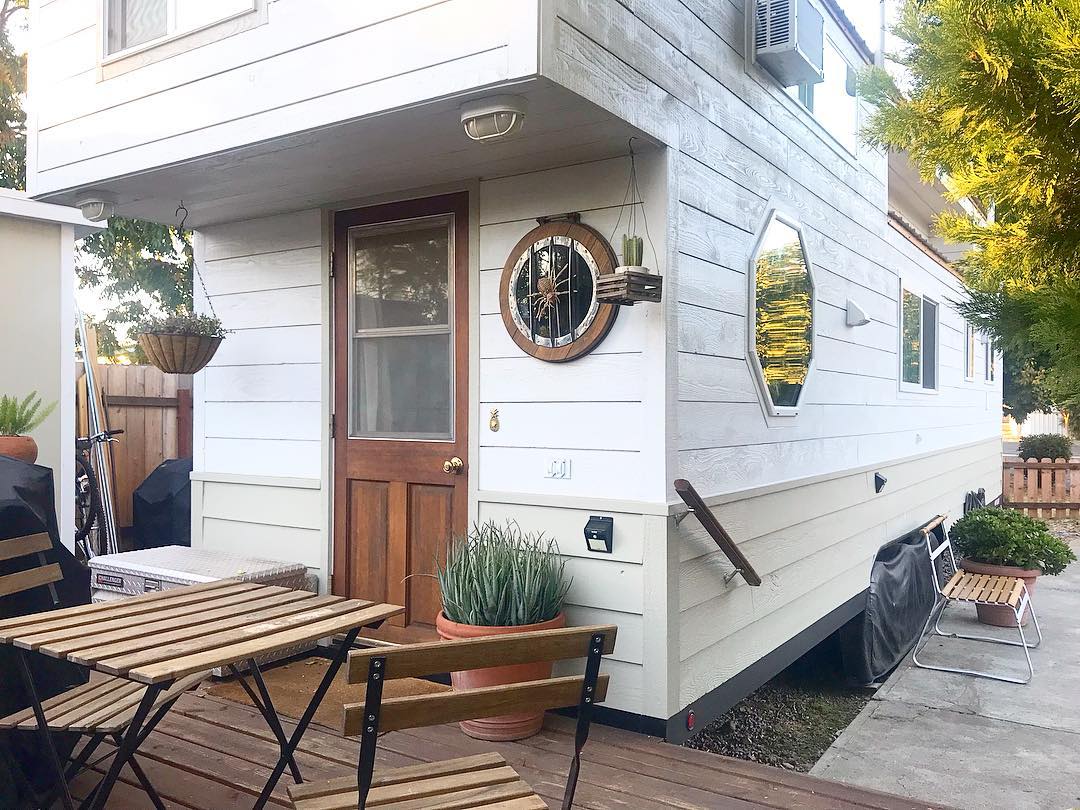 Shalina Kell’s tiny house on wheels is 350 square feet and has been built on an 8.5-foot by 32-foot trailer. It has two separate bedrooms with doors, a full kitchen, bathroom, living room, and ample storage. 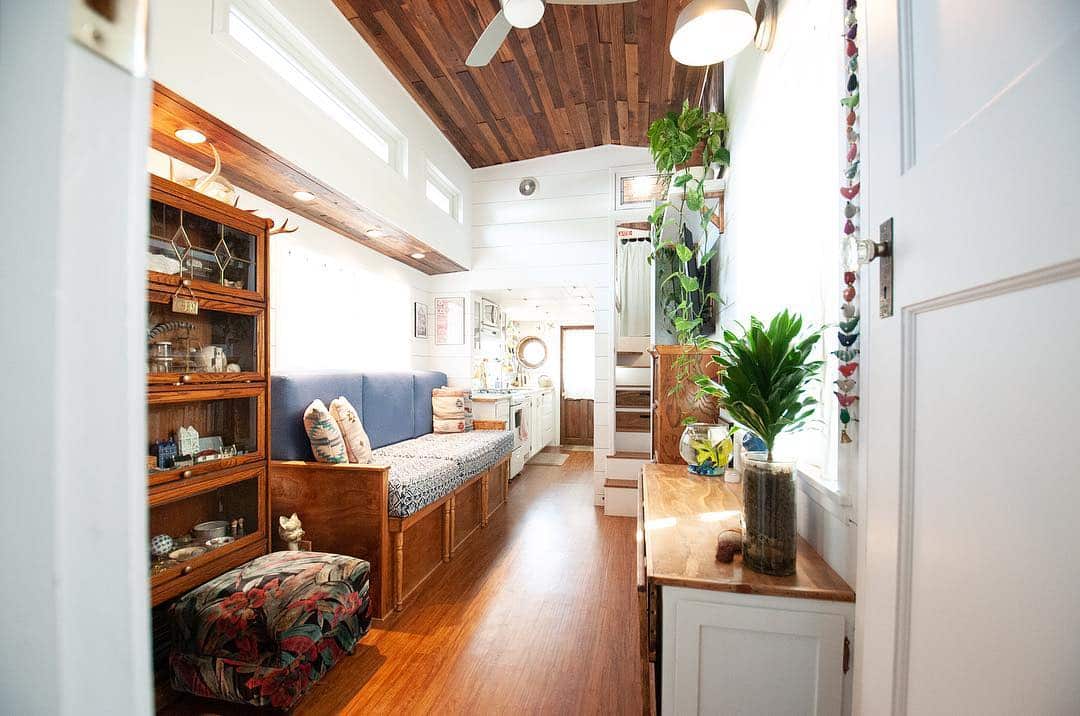 Not wanting to feel like the space was too small, Shalina opted to have high ceilings in the living room. The beautiful wooden floors and ceiling certainly enhance the area, as does the glass cabinet where she displays her thrift store and flea market finds. 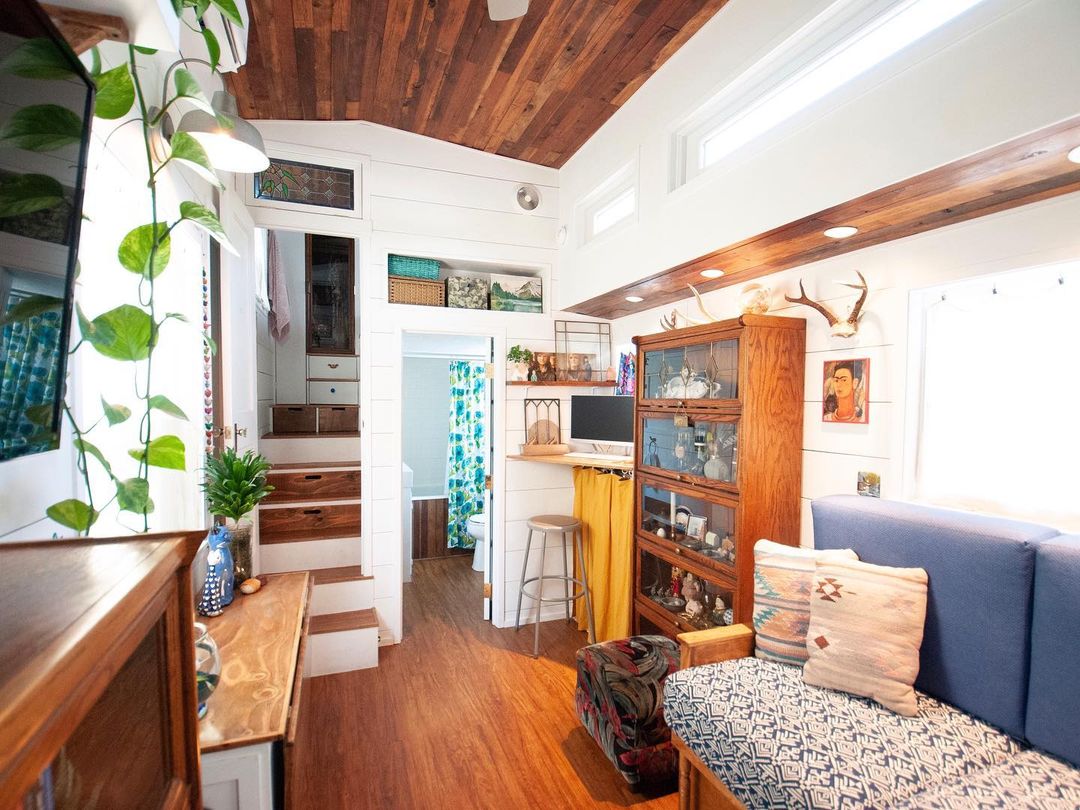 The striking contrast of white against wood lifts the space, and this theme is carried on throughout. Shalina also decided on narrow stairways rather than ladders to access the bedroom. You will also spot transom windows above the doors for air circulation. 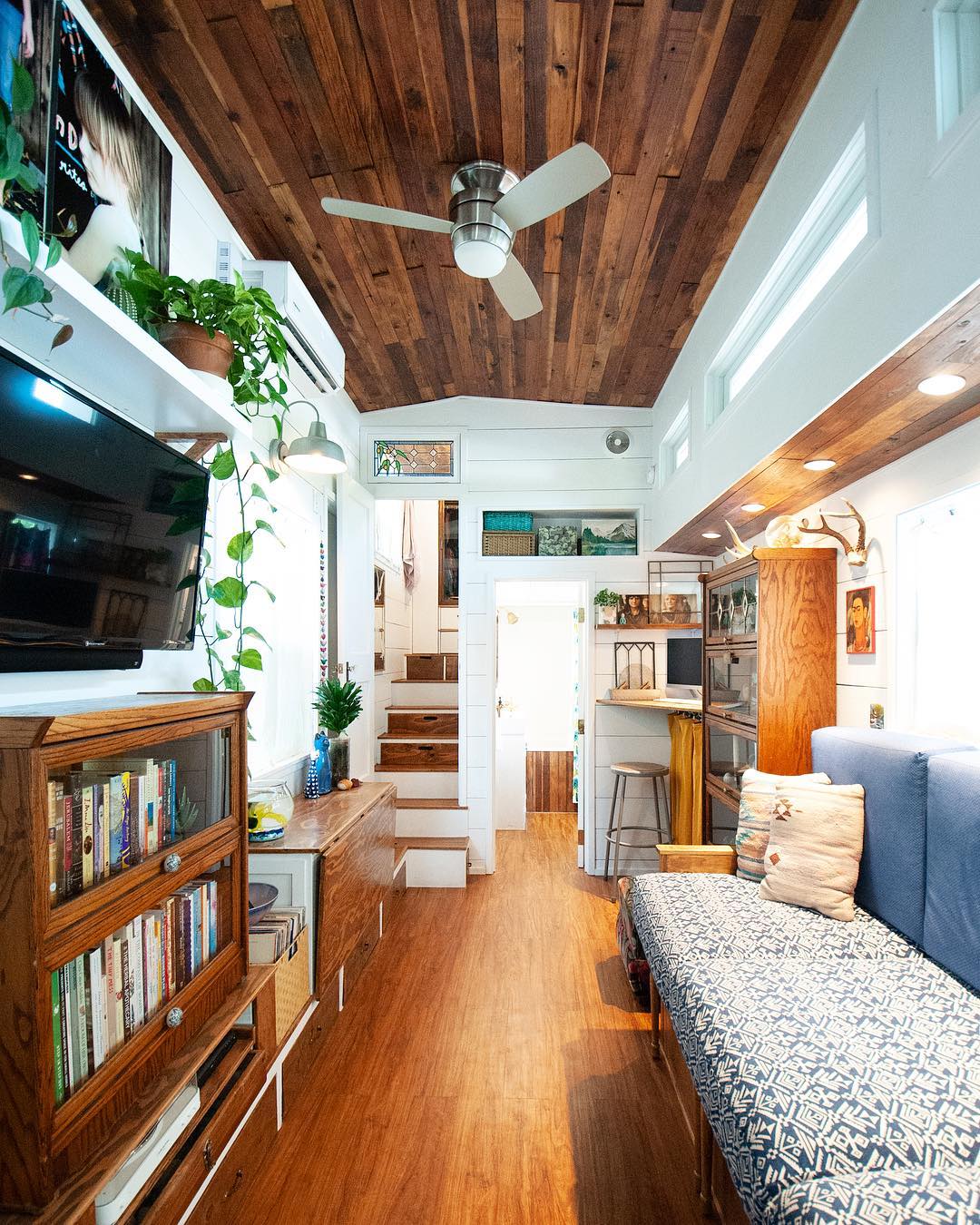 The abundance of storage and clever layout of Shalina’s tiny home means it takes just half an hour to clean the entire house. 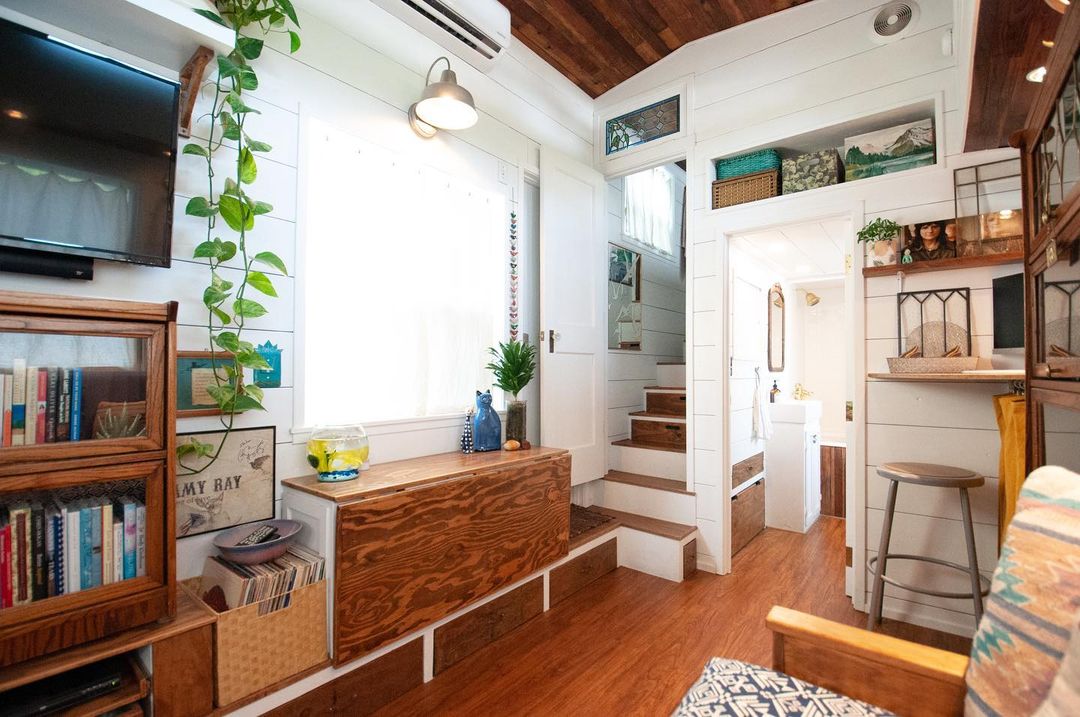 Shalina thought of everything when designing her tiny home. To camouflage the wheel wells, she built storage along the floor space. 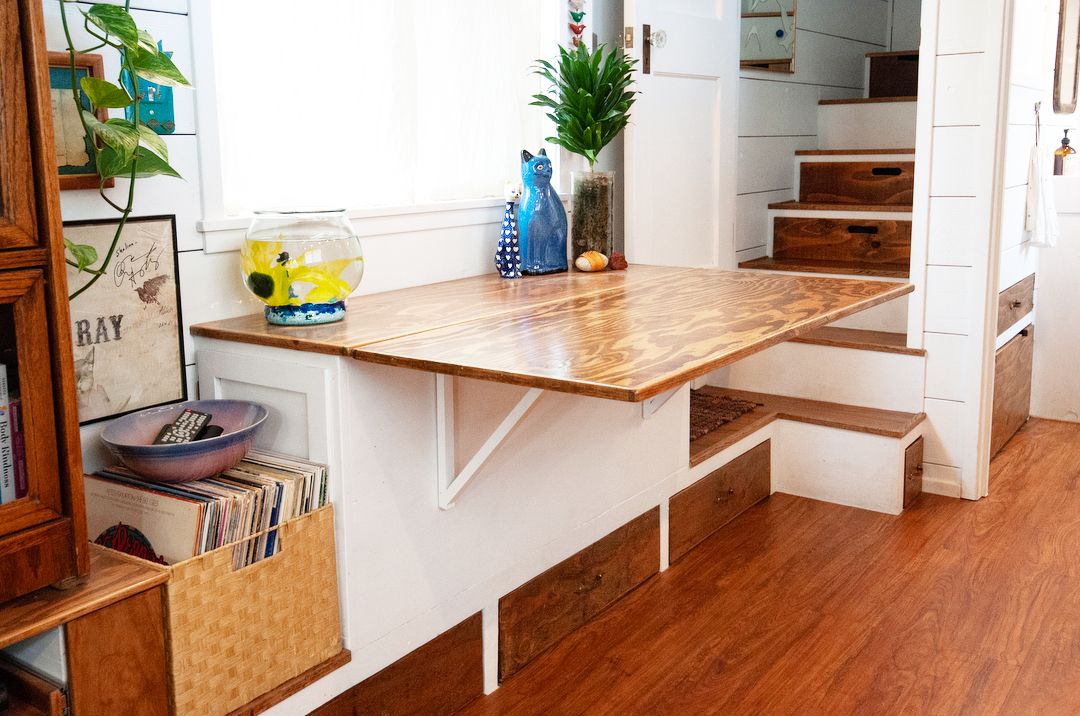 The living room features a fold-down dining table that mostly gets used for crafting, puzzles, and homework 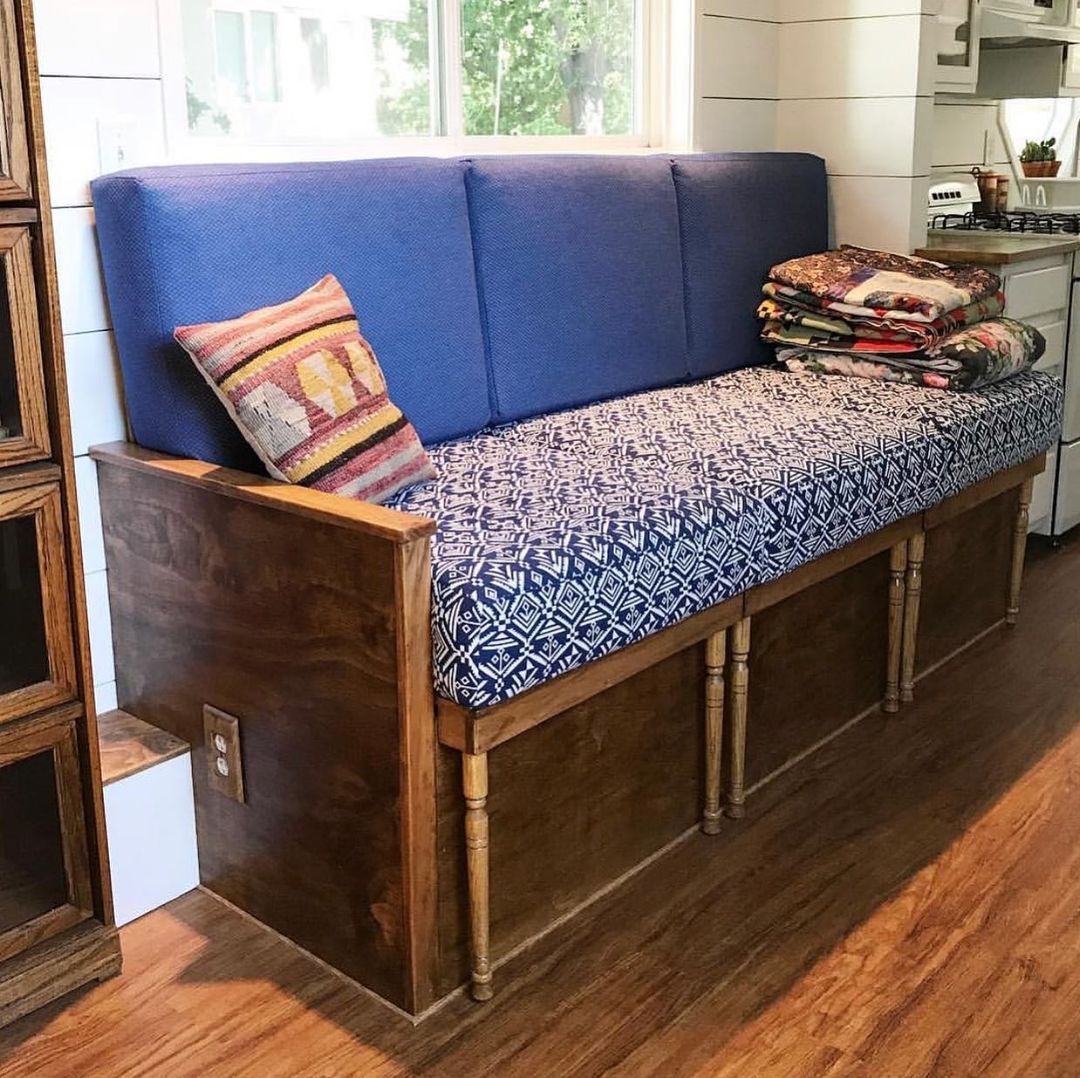 To hide the wheel well on the opposite side of the storage space, Shalina built a couch. When you lift the front, the legs and seat reveal hidden storage underneath. It also transforms into a full-size bed. 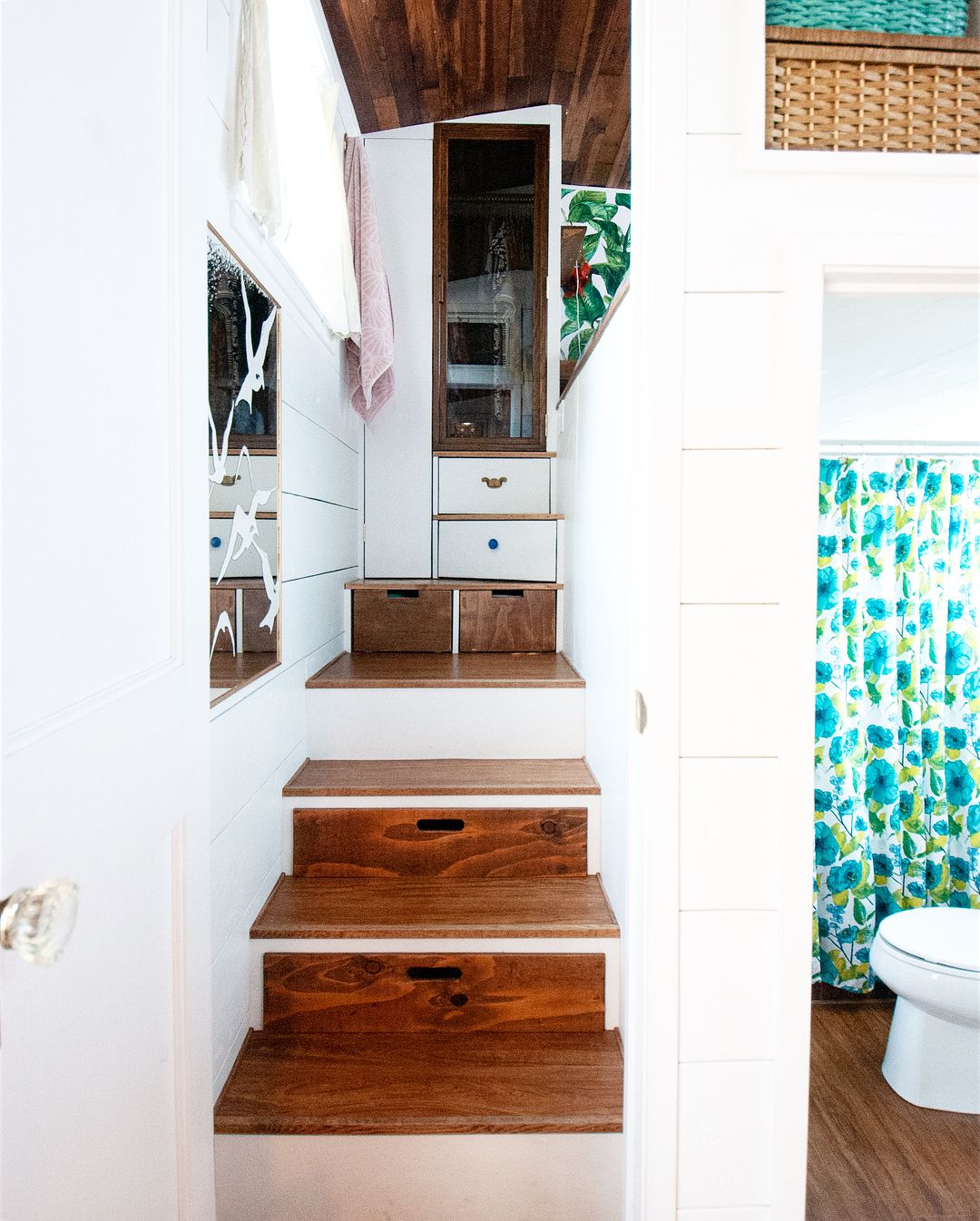 Stairs lead up to both bedrooms, and both have hidden storage within them. Full-length wardrobes are also accessible beside the beds so that Shalina and her daughter can both stand up and get dressed with ease. 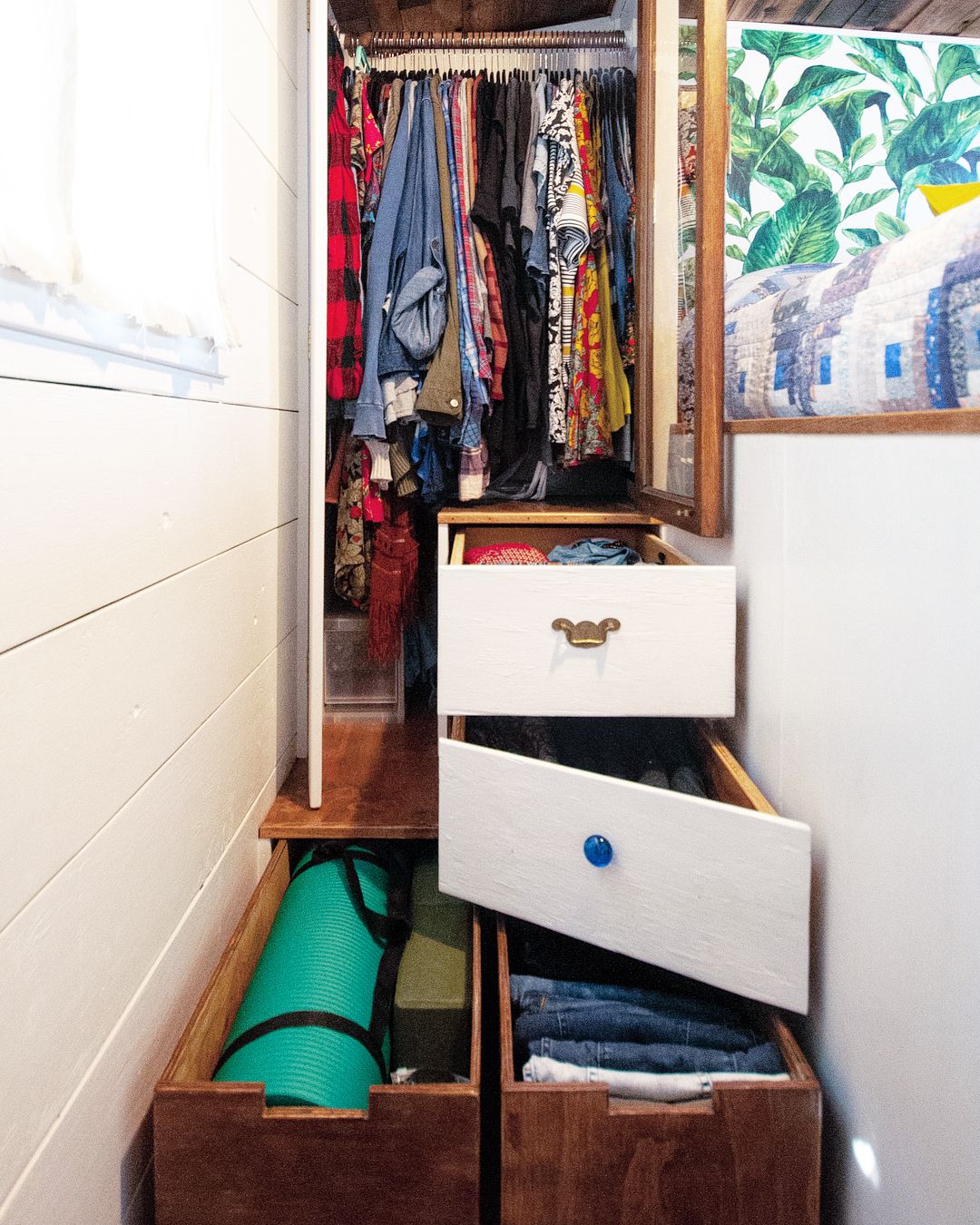 Shalina made use of every nook and cranny to make sure she had enough storage space for all her clothes. While challenging, she was able to craft perfectly shaped drawers that, at first glance, look like ordinary stairs. 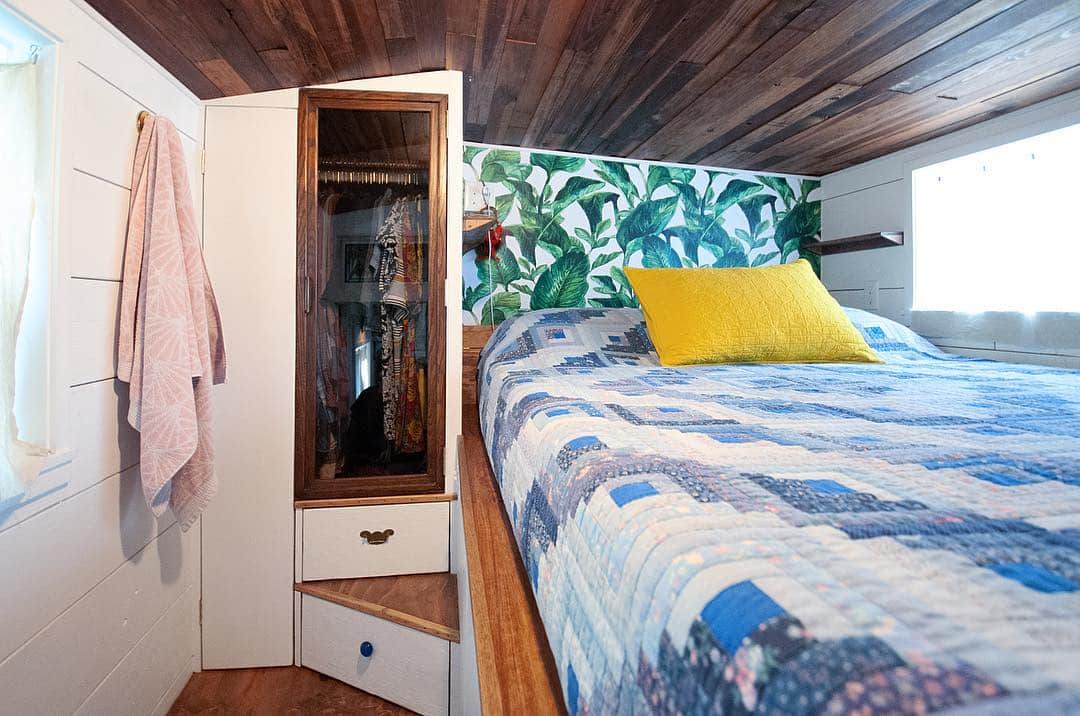 While the ceilings in the bedrooms are low, that doesn’t mean you feel like you’re in a small space in the bedrooms. Shalina’s bedroom is her favorite room in the house, mainly as it has a queen-sized bed, windows on each side, and gorgeous wood paneling on the floors and ceiling. She can also hop out of bed and immediately get dressed. 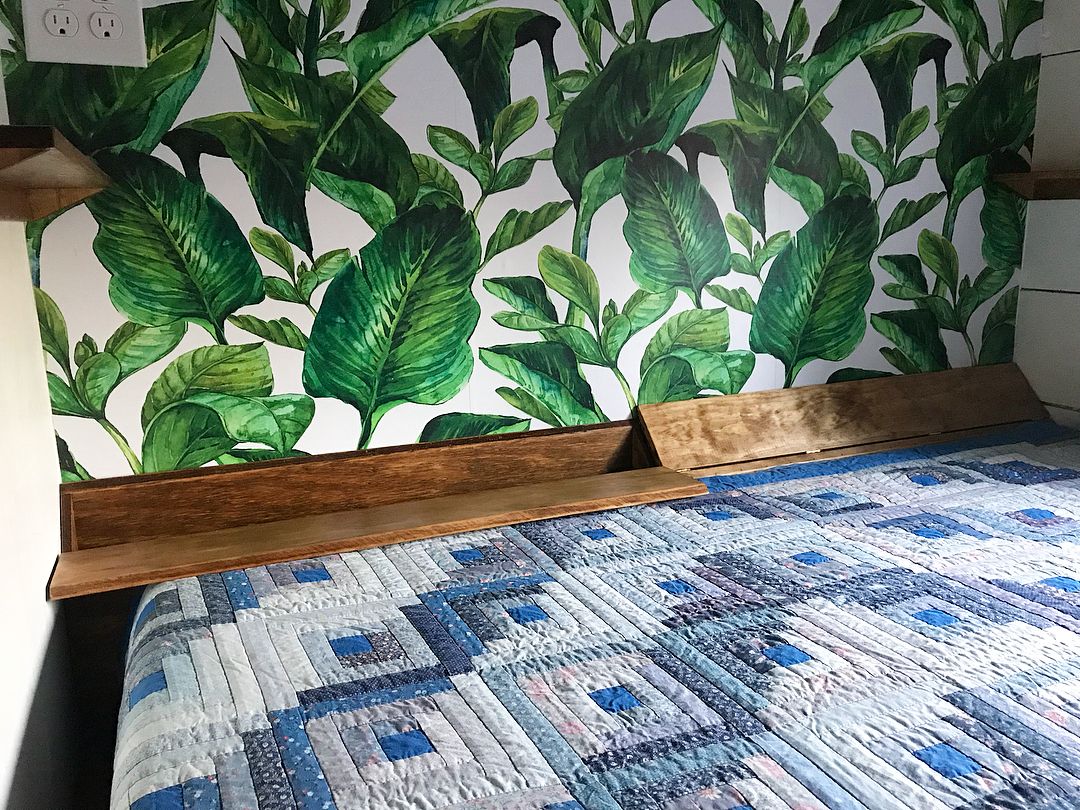 Rather than opt for an ordinary headboard, Shalina decided to do something different. She made a storage headboard for extra storage space and paired it with a gorgeous tropical wallpaper she purchased from Etsy. 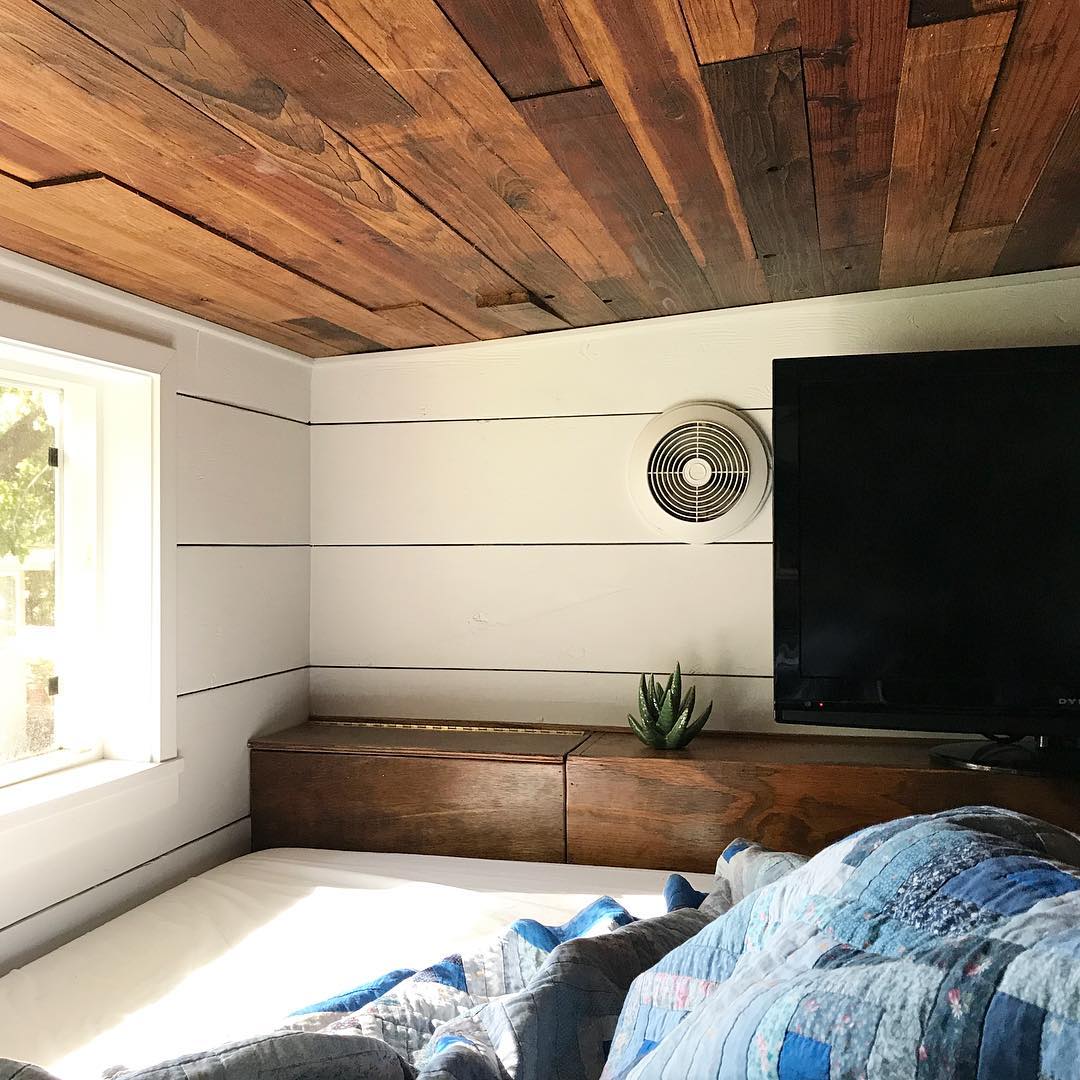 Plenty of storage can be found at the end of Shalina’s bed, with even enough room for a large TV. 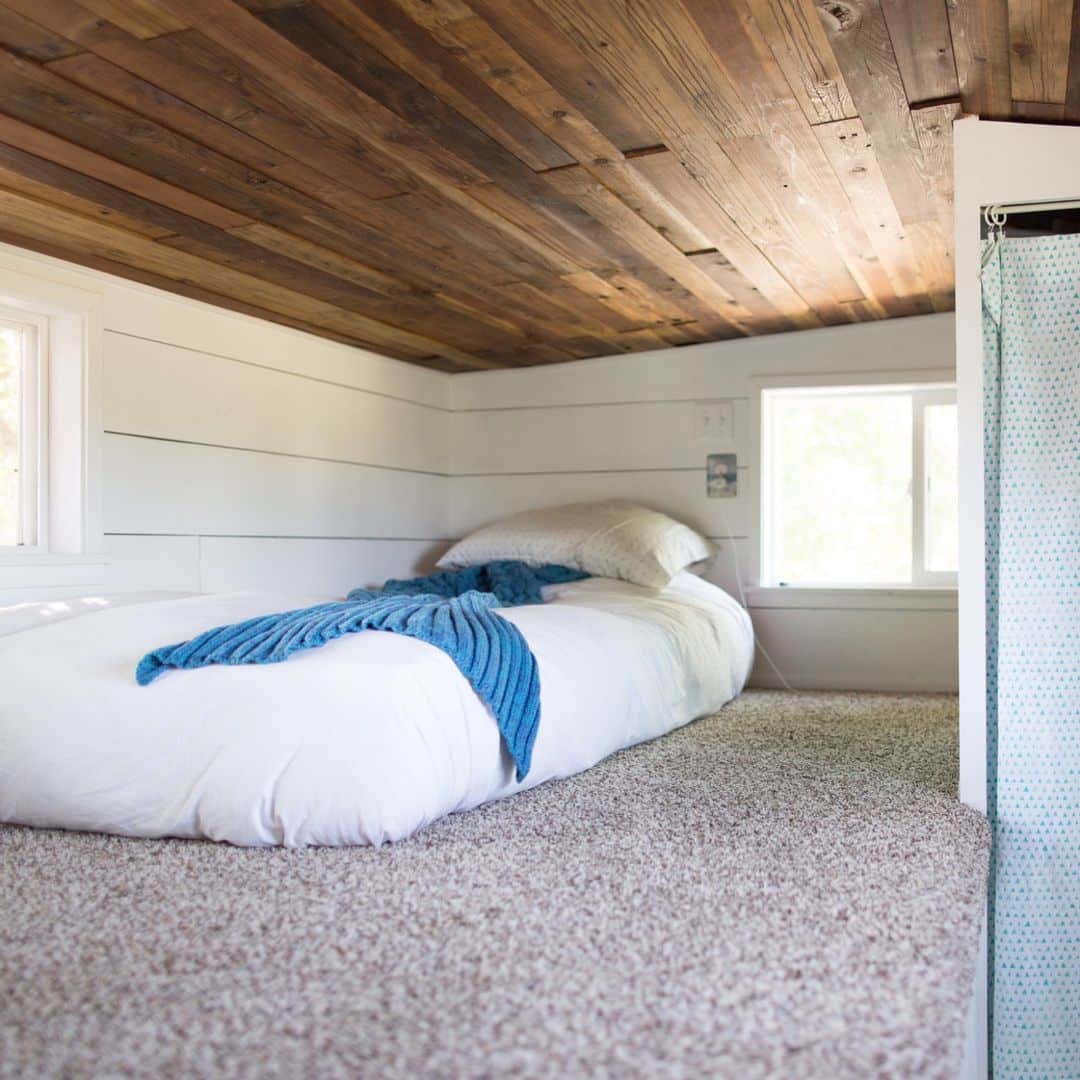 Shalina’s daughter has the largest bedroom of the two at 11 x 8 feet. The bump out over the front door adds an extra 32” to her space. It is located above the kitchen and features the same gorgeous wooden ceiling and white walls, but with a large rug for warmth. 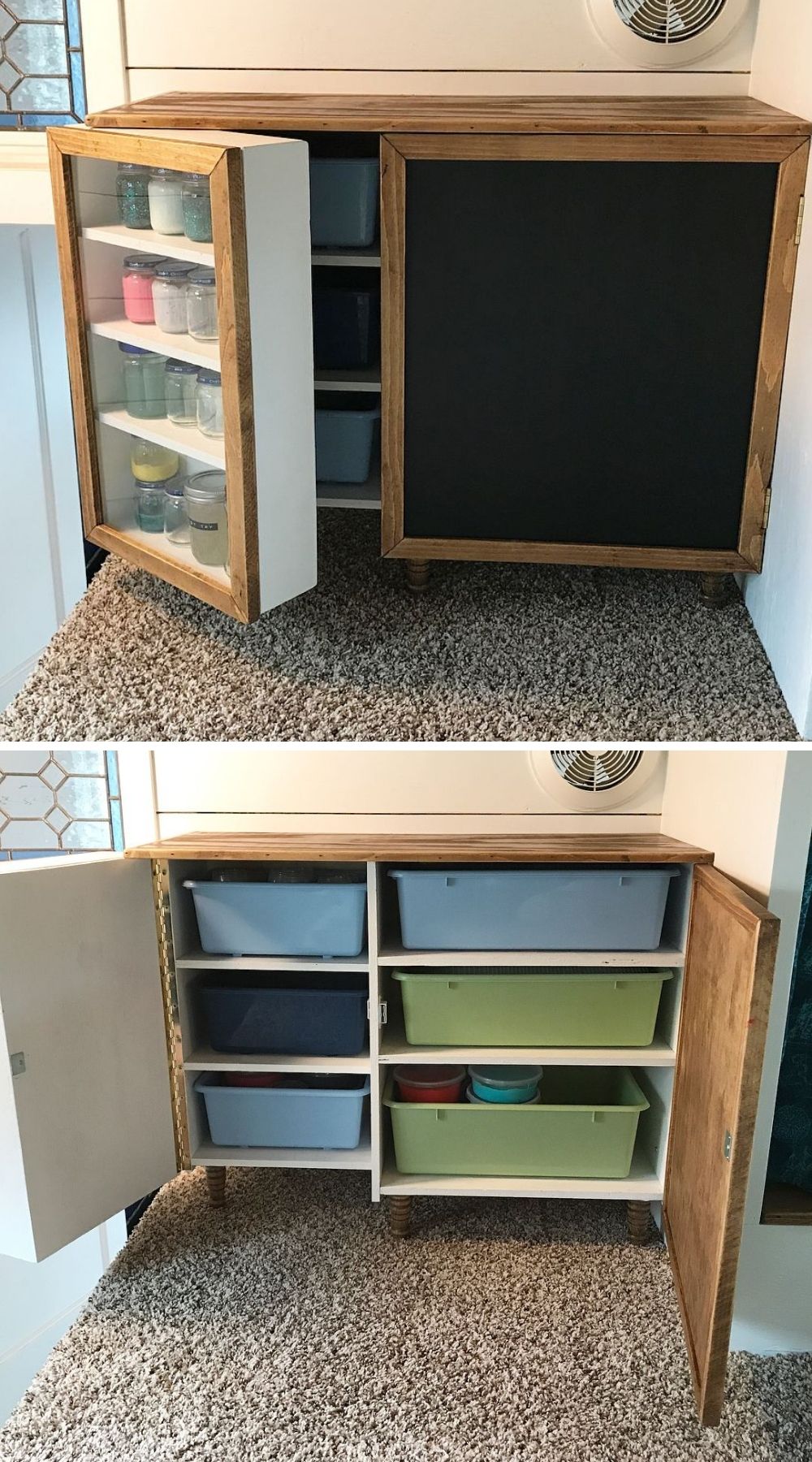 Shalina built a storage and display cabinet with a chalkboard door for her daughter’s slime collection. The jars and bins are all from a thrift shop. 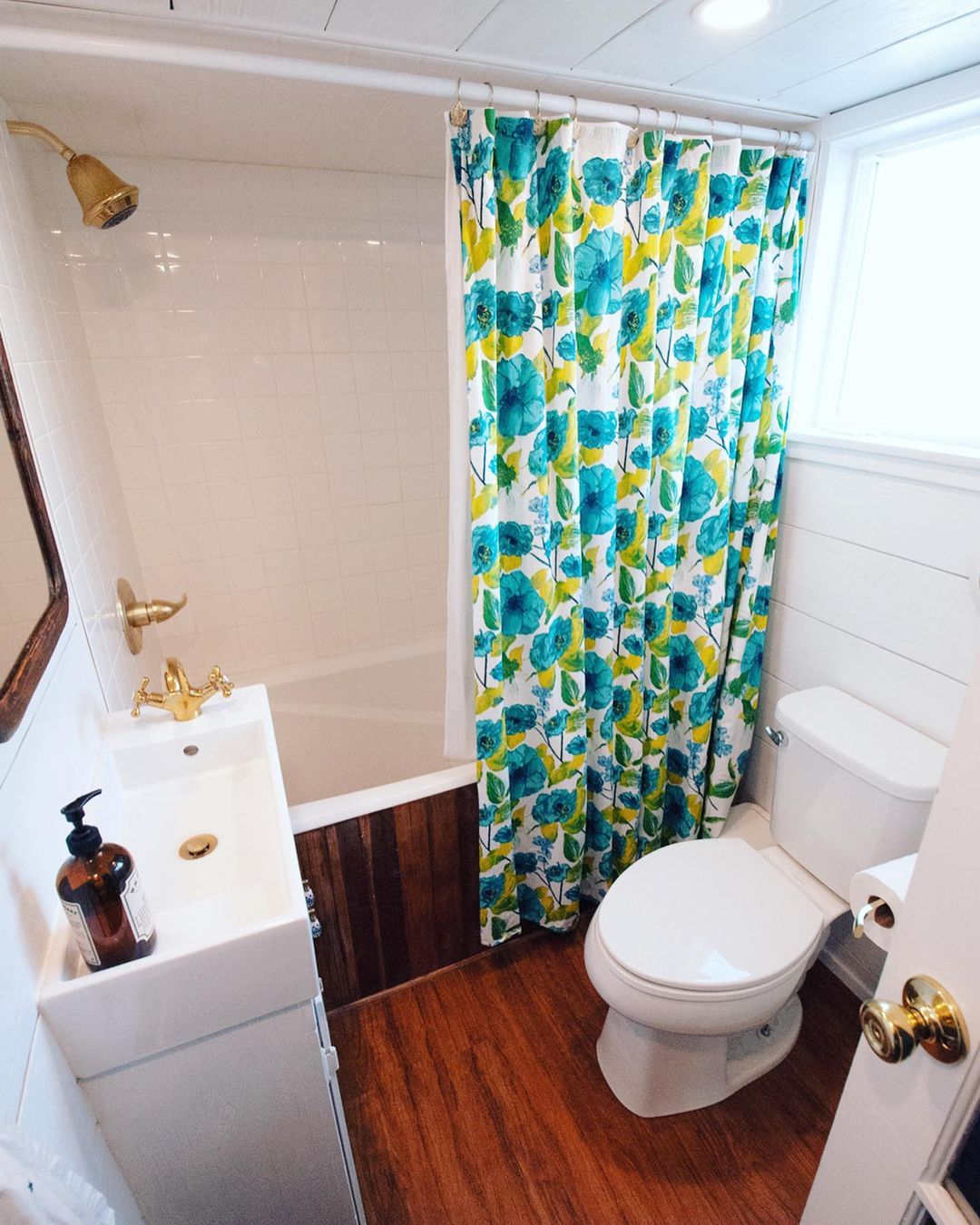 Surprisingly, the bathroom had some of the least amount of planning put into it. Shalina knew all that she needed to fit in it was a plumbed toilet, sink, and tub. It’s simple yet functional. 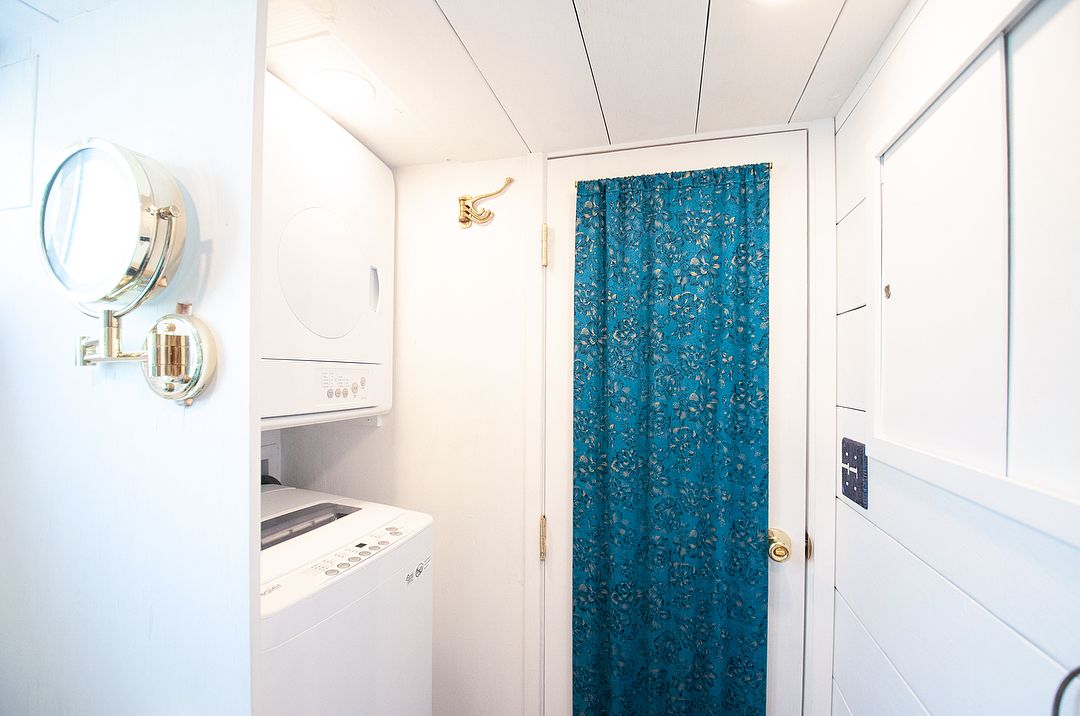 The washer and vented dryer are compact Haier units that are meant for small spaces. Shalina built a shelf for the dryer, so they almost feel like one stackable unit. 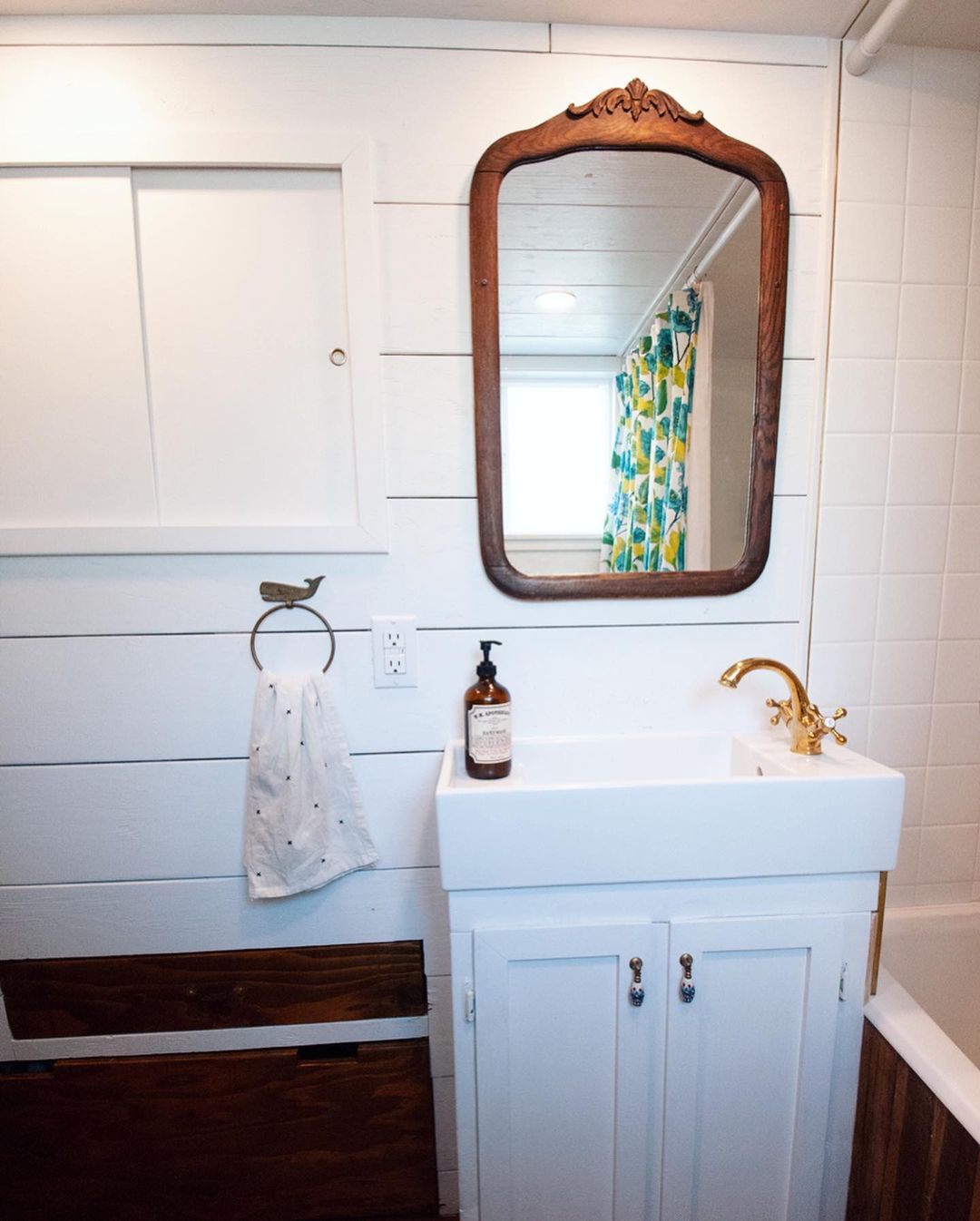 Due to the small size of the sink from IKEA, the bathroom still feels spacious, even with a soaking tub and washing appliances. 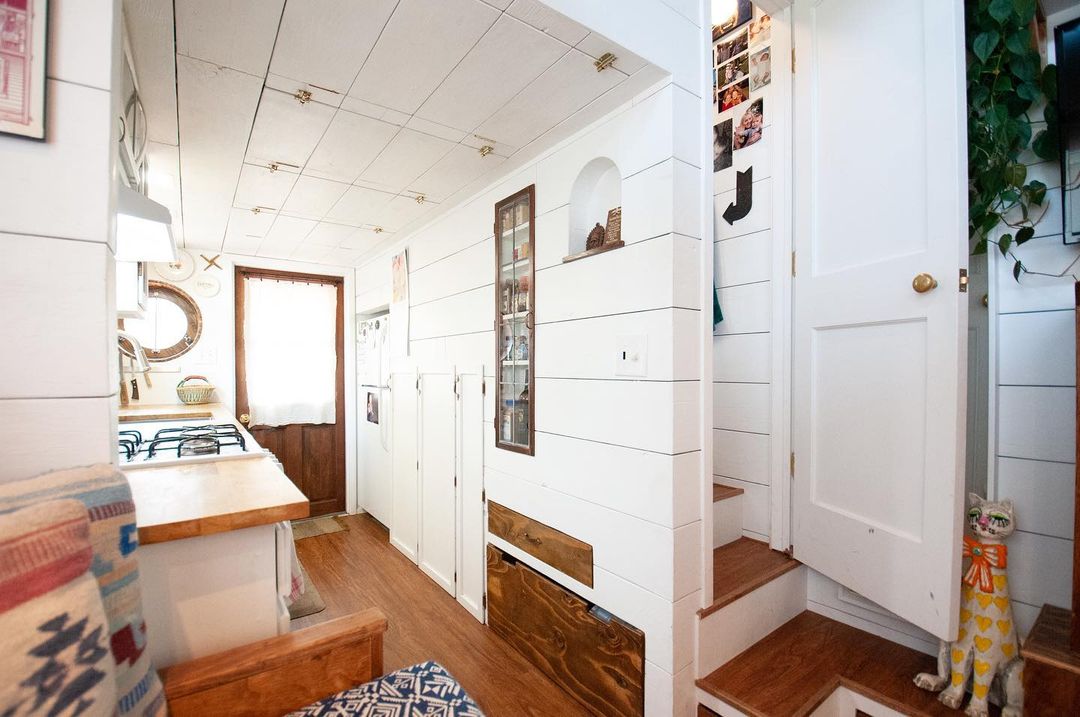 The layout has been incredibly well thought out, with the kitchen being mostly the heart of the home. A door on the right of the kitchen leads to Shalina’s daughter’s bedroom. There are also cabinet doors that allow the pantry to roll out on casters, with a fridge positioned on the end. 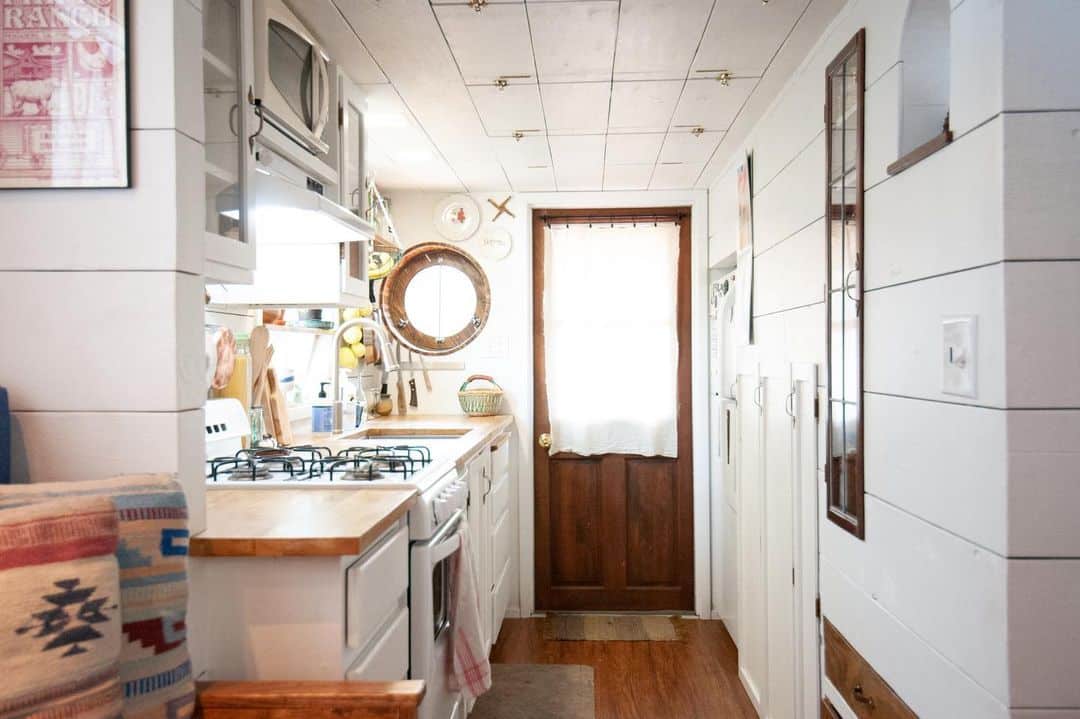 Shalina managed to pick up some bargains while shopping for her kitchen. Her cheap wooden countertop is from IKEA, and she managed to pick up a new 18-inch dishwasher from Habitat for Humanity ReStore. She also has a compact 20-inch oven/stove and a short refrigerator. 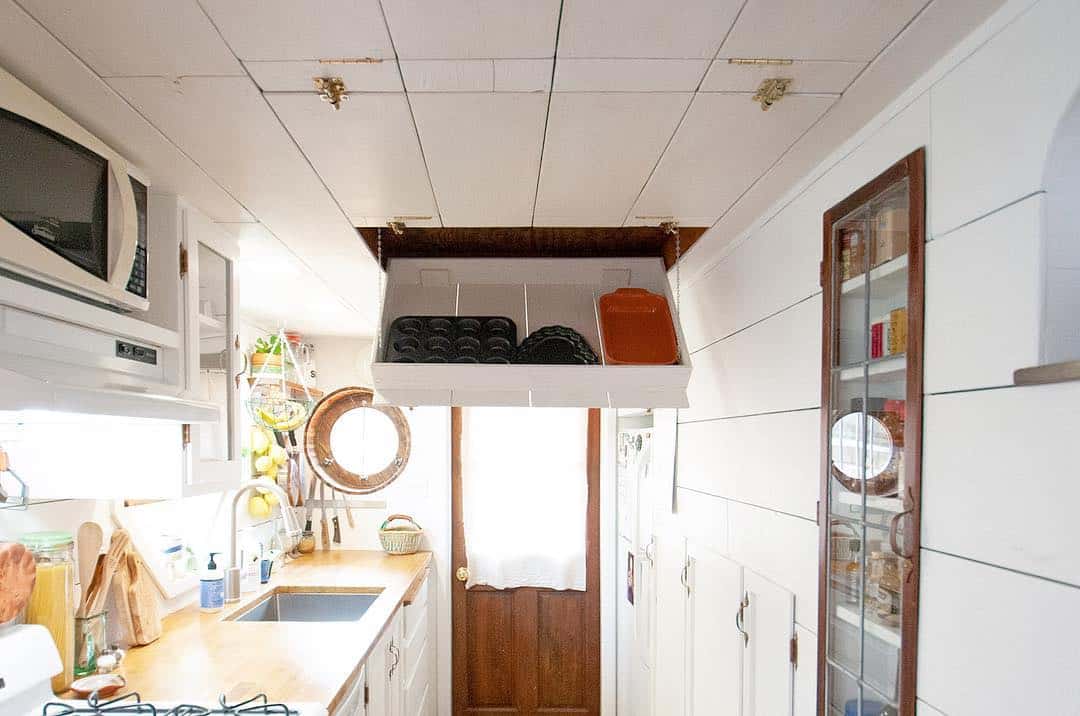 During the design and build process, Shalina said she became ‘obsessed’ with making sure she had as much storage space as possible. So, she installed four drop-down cabinets that sit between the loft beams and the ceiling in the kitchen. 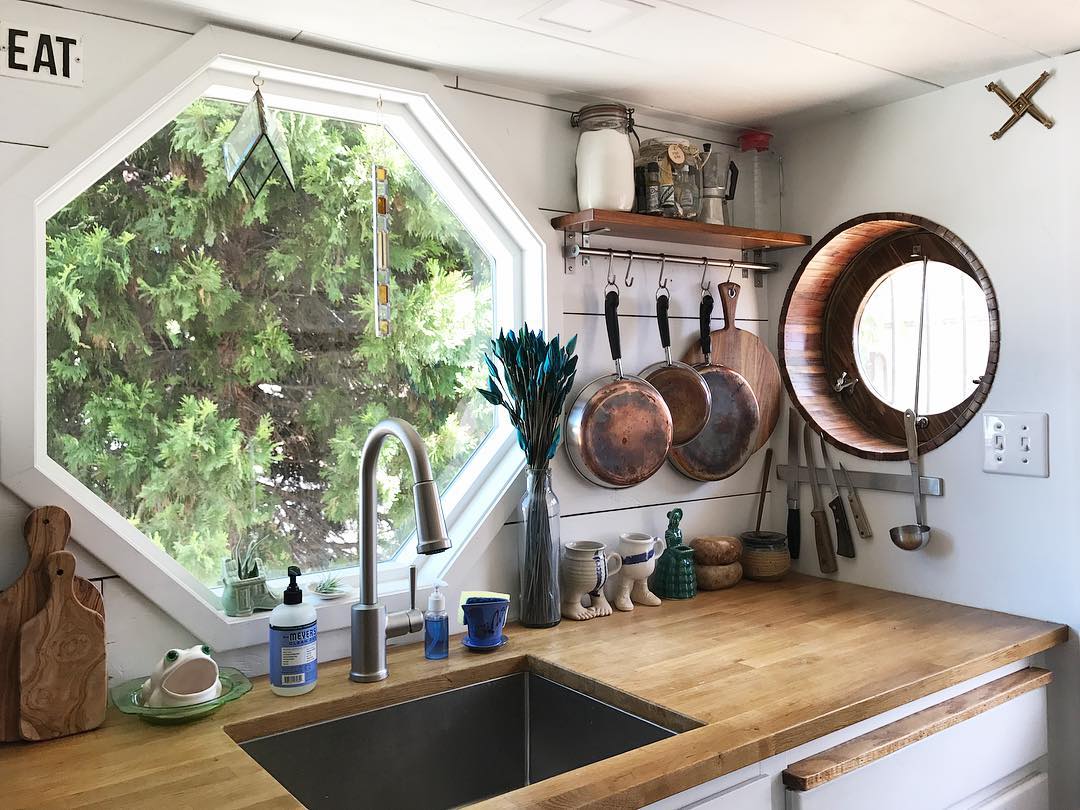 No stone was left unturned in creating a kitchen of which Shalina could be proud. It’s also extremely functional. The shelf came from Goodwill, and the bar underneath it came from IKEA. Hanging pots means she doesn’t need to find extra cupboard space for them. 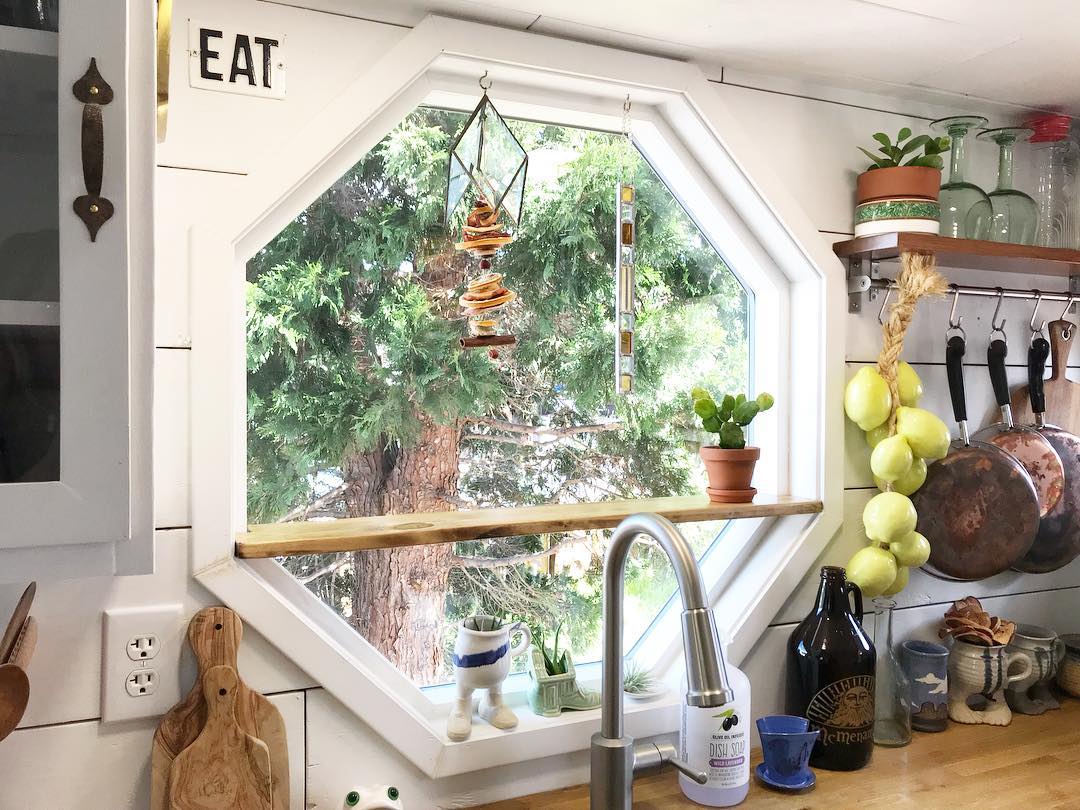 The octagon window would have to be one of the highlights of the kitchen. It’s also enhanced further with the addition of a shelf for herbs and other plants. You can learn more about Shalina’s tiny home journey and purchase her tiny house plans here