This is probably the cutest tiny house you will ever see. And it even has a walk-in-closet.

When Dolly Rubiano from Victoria, Australia, stayed in a house truck with AirBnB in 2013, she fell in love. Not only with the house truck, but with the idea of living in a tiny house. It wasn’t long until Dolly was on a mission of her own: creating a little house just for her.

She stayed in many tiny houses over the next few years to get a feel for what she wanted. This process even involved attending workshops. Dolly then built a cardboard model of her chosen design and hired Eco Tiny Homes to build the $68,000 house on wheels for her. By 2017, she had her feet up in her brand new home on rented land in Macedon Ranges, Victoria, Australia. 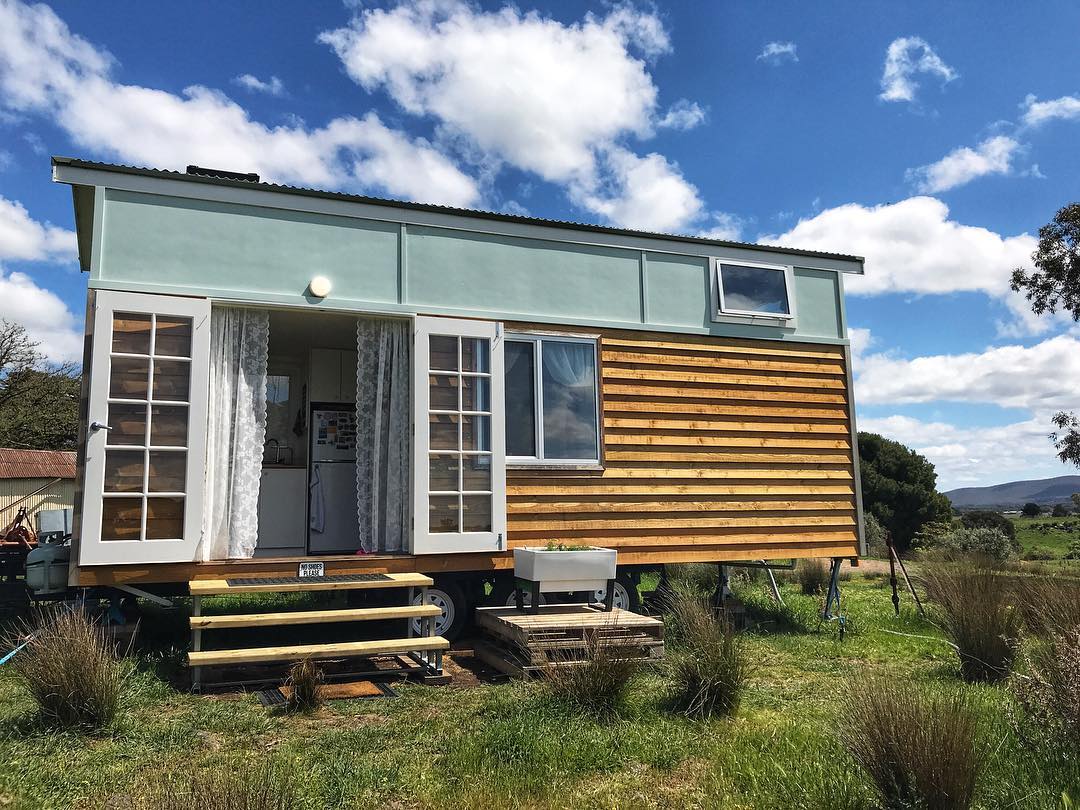 The beautiful and quaint house on wheels is a mere 17.2m2, but you will be astounded at what lies within. It has a full bathroom, a walk-in closet with a laundry, a kitchen, and two loft bedrooms. It also works as a makeshift office, as Dolly works her IT job twice a week from home. Most importantly, Dolly can run it on solar power or electricity. 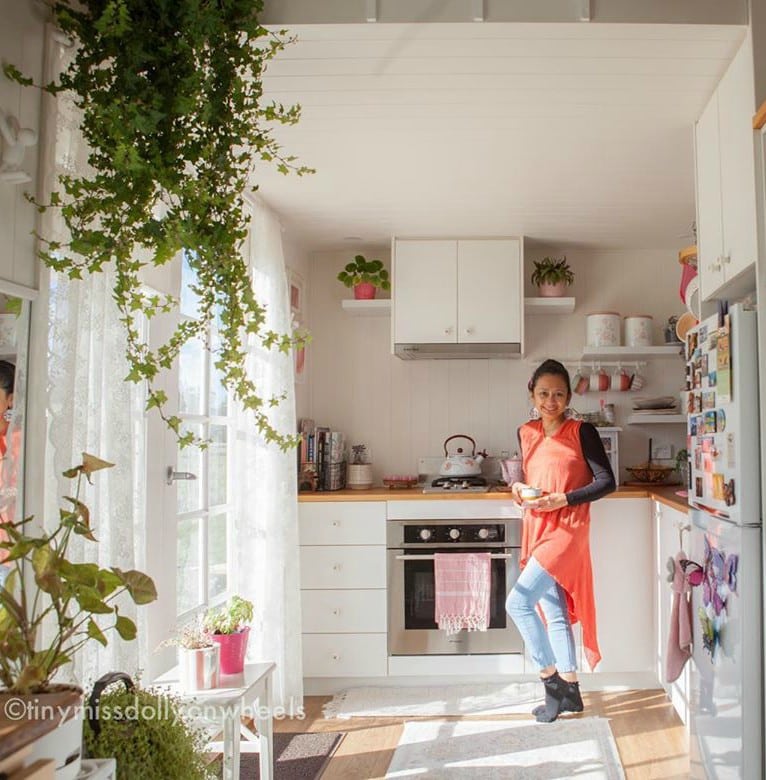 Even though Dolly’s tiny house is deceivingly spacious on the inside, it’s still only 17m2, which means she had to get inventive and a little bit ruthless. She had to stop collecting old stuff, have a clear out of the possessions she did have, and drastically downsize her wardrobe, kitchenware, and virtually everything she owned. Even today, Dolly has to be mindful not to pick up any bargains while out shopping, so as to detract from the clutter-free appeal of the tiny home. 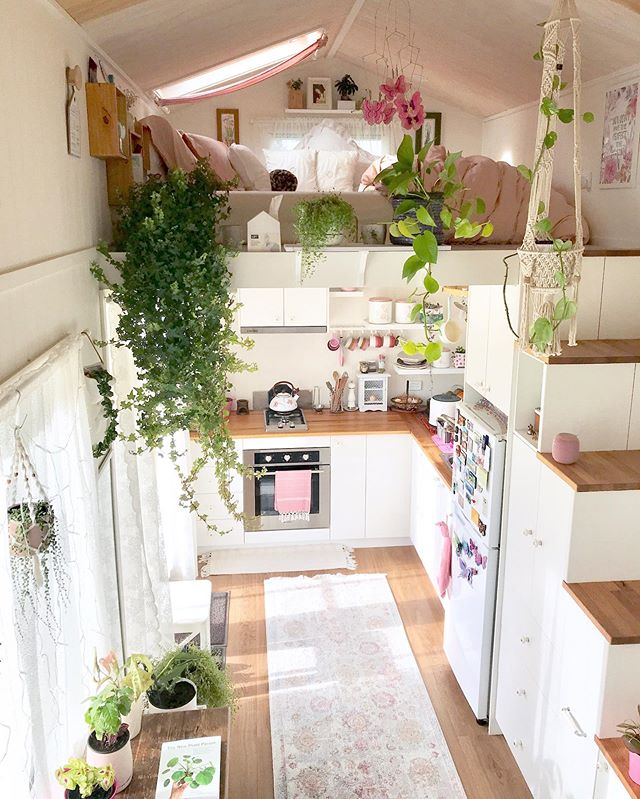 When you step through the doors of Dolly’s delightful dwelling, it’s hard not to notice the décor. It’s fairly evident that a theme is in play. Dolly chose a feminine and simple style. This meant that the tiny house is furnished and decorated with white, pink, natural wood, and a mixture of vintage, Bohemian, and hand-crafted goods. This eclectic mix works beautifully together for both character and a seamless design. 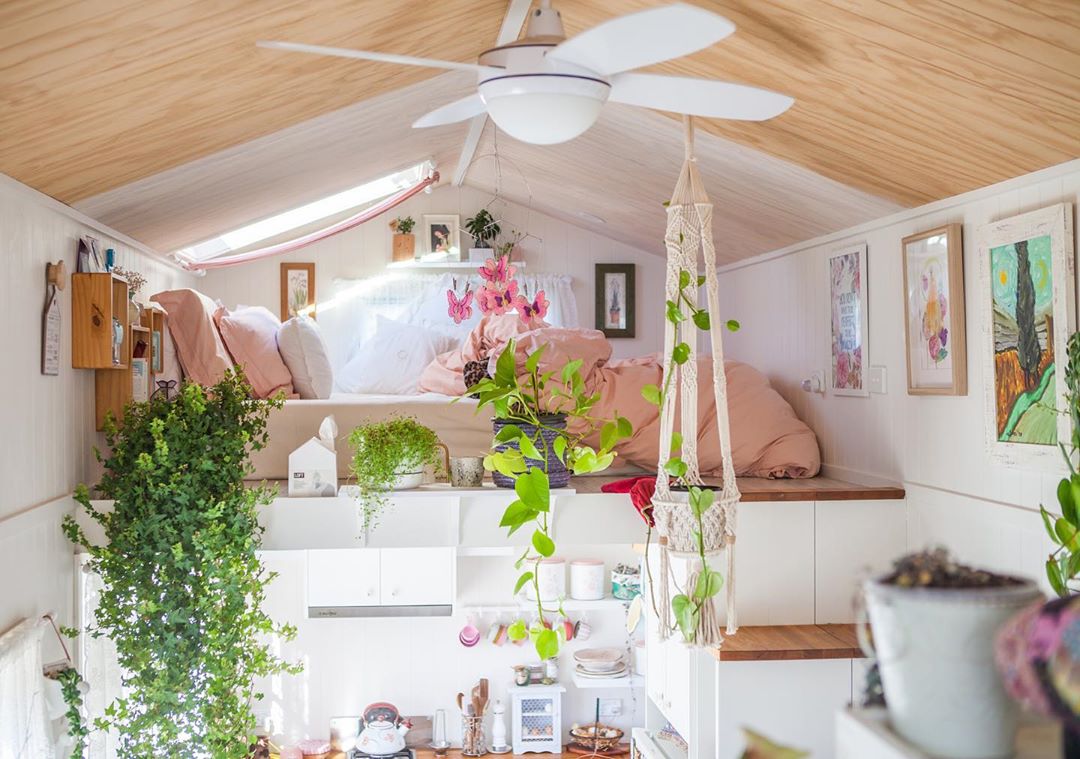 The master bedroom, while small, is one of the most beautiful parts of the tiny home. Dolly’s bedroom is positioned in a loft above the kitchen and carries on the natural, white, and pink theme of the open-plan living, dining, and kitchen area below. There is a natural wood and white ceiling, a skylight to let in plenty of natural light, and space for a generously-sized mattress. It’s also accessible via stairs which double as storage areas. 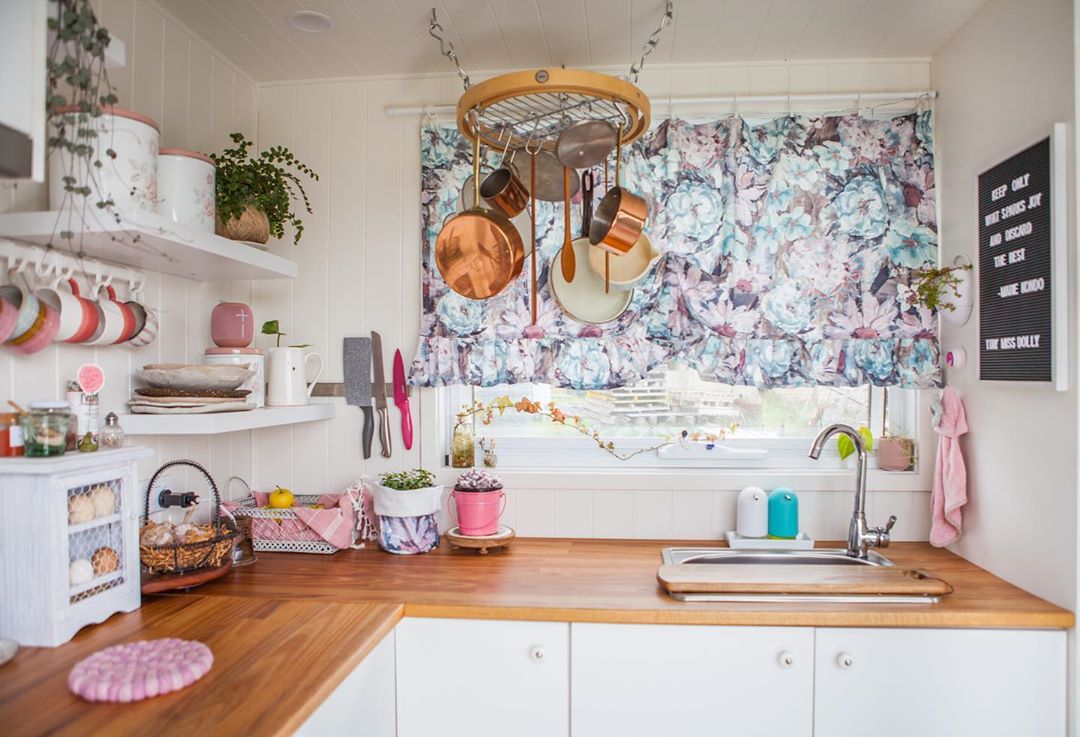 Dolly put a lot of thought into the kitchen. Not only did she want it to be a functional space, but one she could be proud of. It also had to work with the decor and design of the rest of the home while maximising on space.

She opted for floating shelves and a pot rack, rather than the more traditional above-head cabinetry. Her reason for this was simple: she wanted everything to be easy to access and within reach. Because she had hand-picked a beautiful mix of cups and plates, she also wanted to display them proudly. 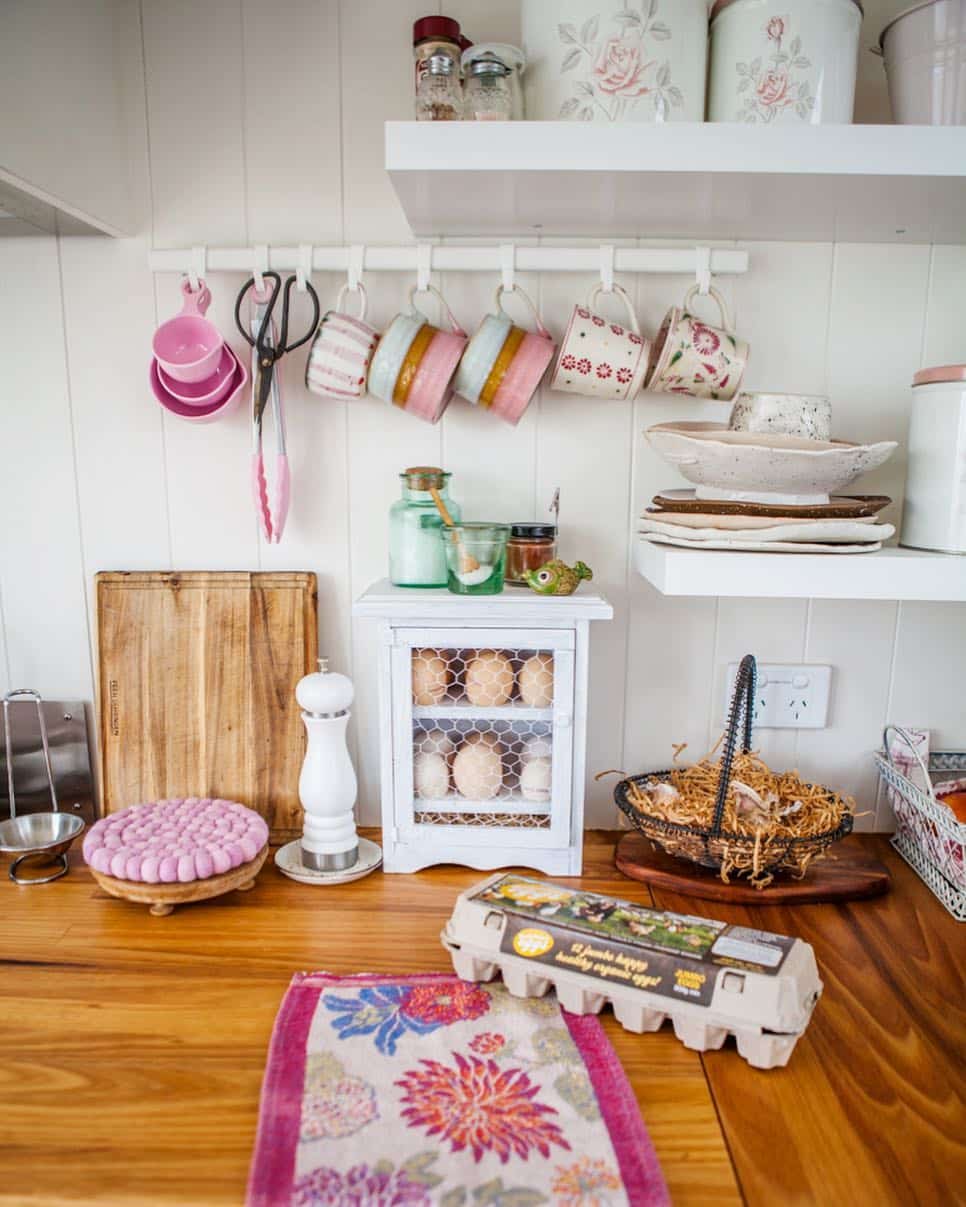 Dolly turned to Designer Eco Tiny Homes for hardwood, the same as her kitchen countertop, to create shelving in her kitchen. However, after careful consideration, she decided that white floating shelves would be better suited in the space. They would hide the brackets, look clean and tidy, and also enhance the vibrancy of the area. 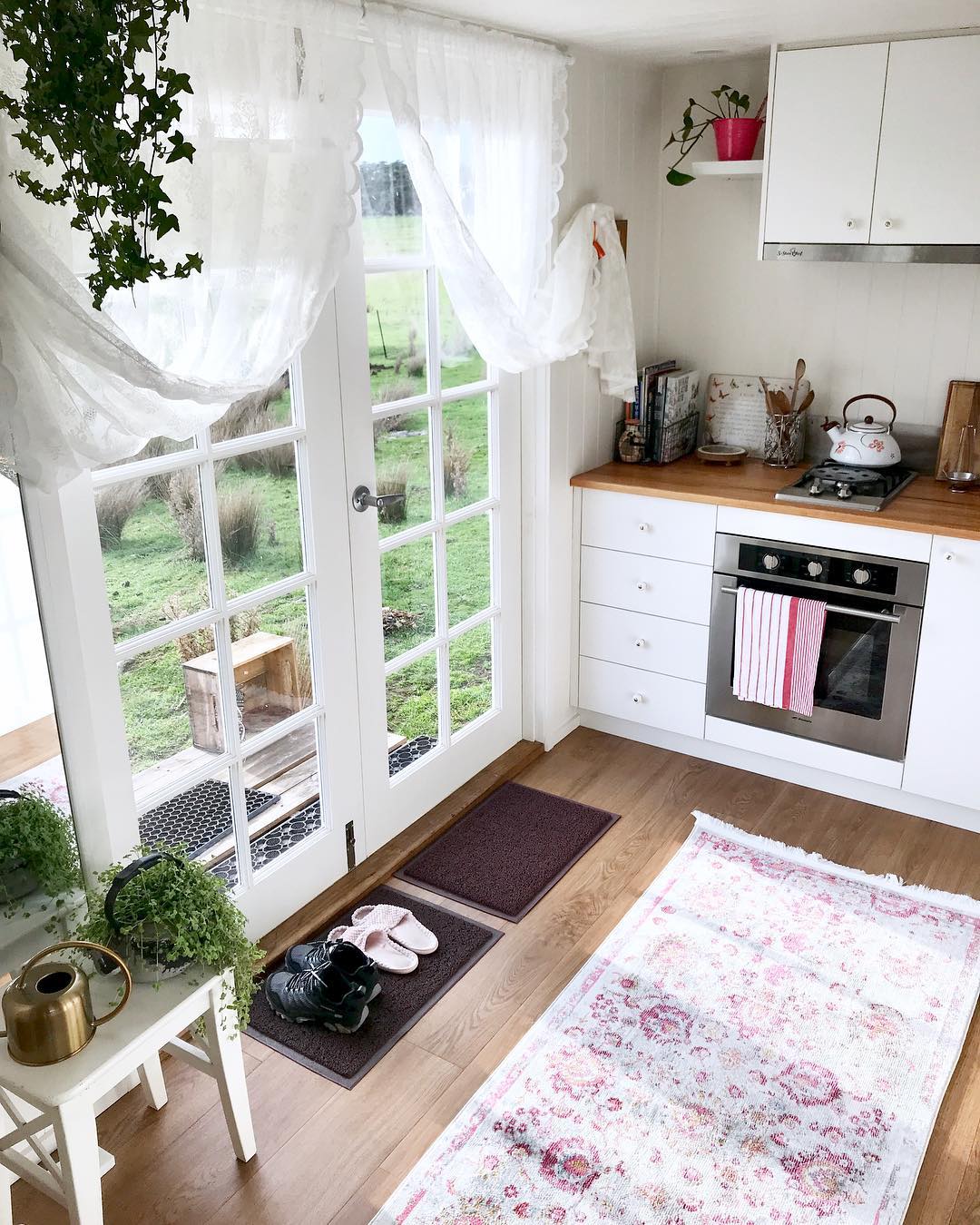 Dolly knew from the beginning that living in a tiny home would mean she would need to think small. Everything you would find in a “normal” home, would have to be completed or purchased on a far smaller scale. An example is the stove. A standard oven has four burners, but Dolly’s has one. She also utilises hanging storage far more than any owner of an average home would. 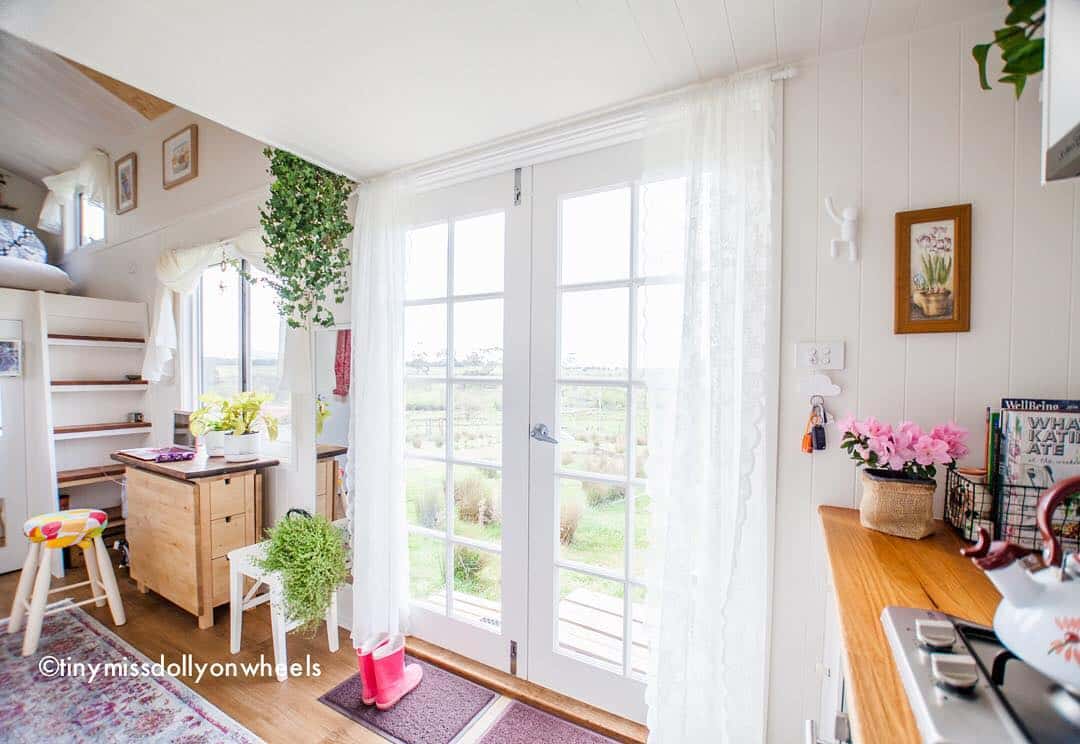 Natural light is quite essential in a small space, so Dolly made sure she enhanced it as much as she could. Her tiny home has beautiful French doors that open out from the kitchen. The indoor-outdoor flow allows for the feel of a much larger home. It also allows her houseplants to thrive. 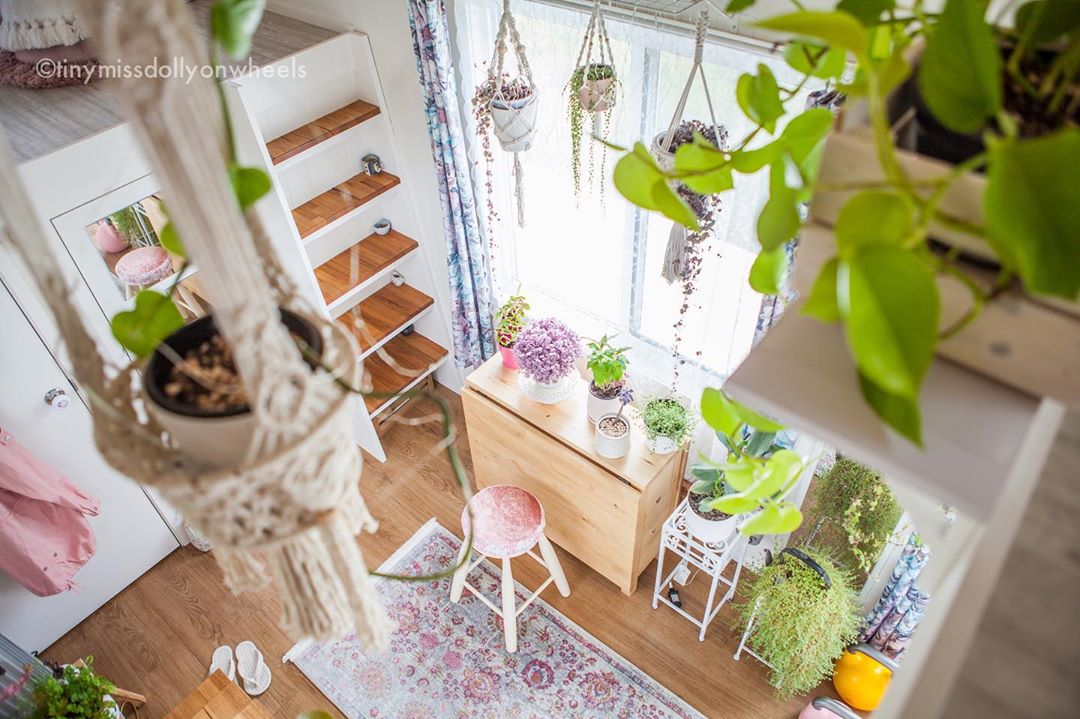 Looking down at the living space from above is a mood-lifter. This tiny home promotes an ideal environment for natural living and light while also having enough space for everyday tasks and hobbies. 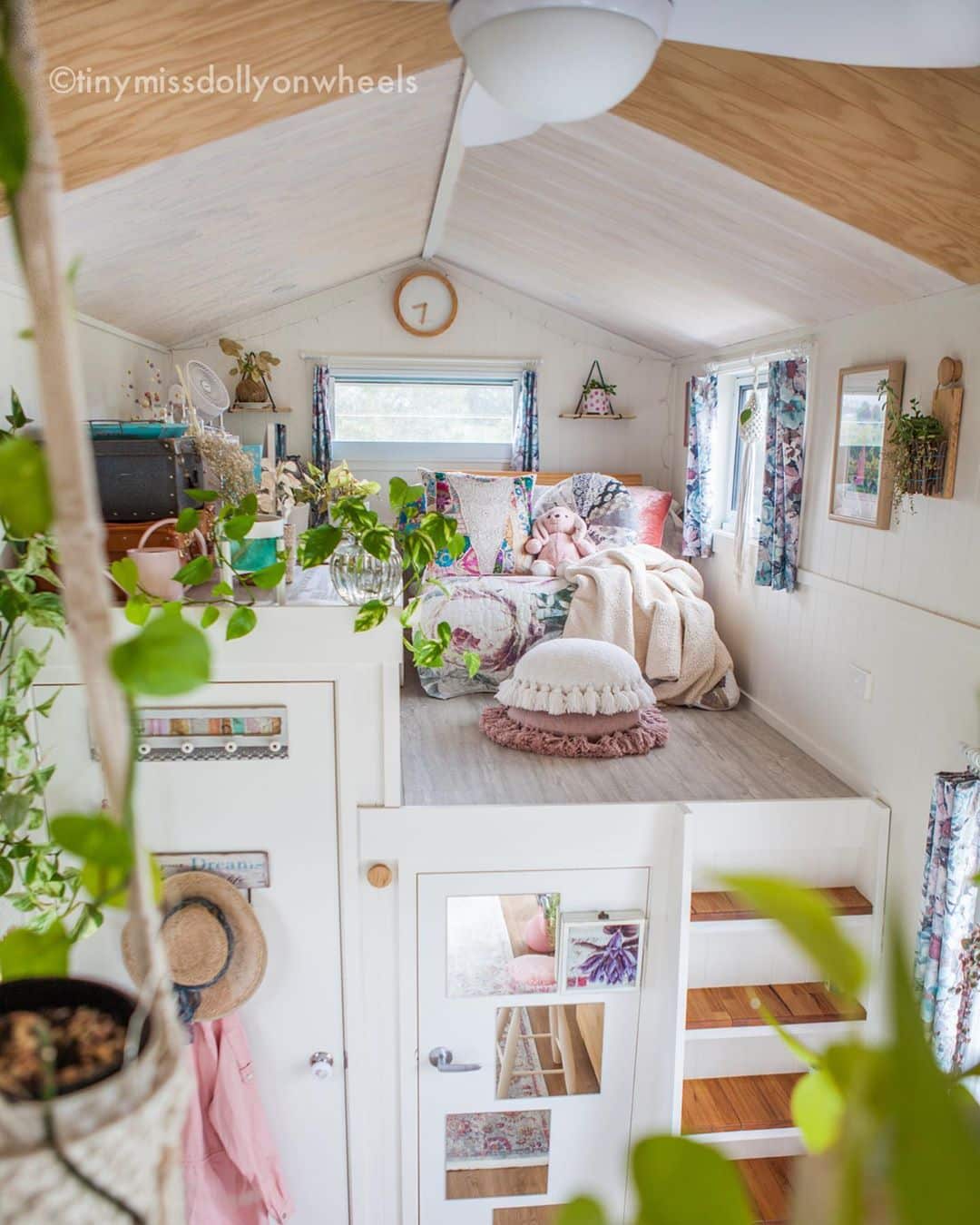 While Dolly’s tiny house is designed to be comfortable for just her, it would also suit any guests she had to stay. There are two lofts to suit a range of needs. One is the master bedroom while the other has two levels, which consist of a sofa bed, storage space, a desk, and room for a single mattress. 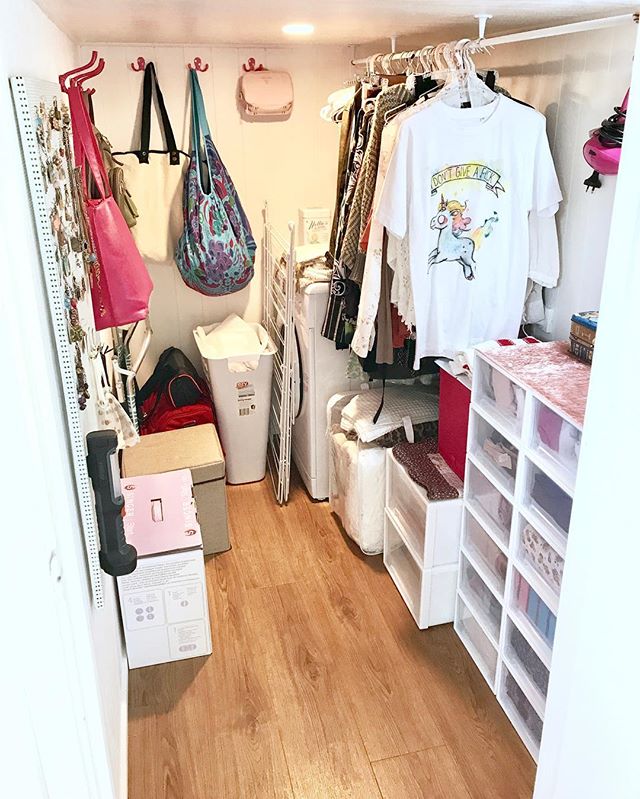 Even in 17m2 of space, Dolly has managed to make room for a walk-in wardrobe. It doubles as a laundry and has floating shelves, a clothing rack, a washing machine, wall hooks, and stackable drawers. Everything has its place in this wardrobe to ensure it’s both tidy and functional. Dolly also has a rule that if she can’t fit anything else into a drawer, she won’t buy anything new until she gives something away. 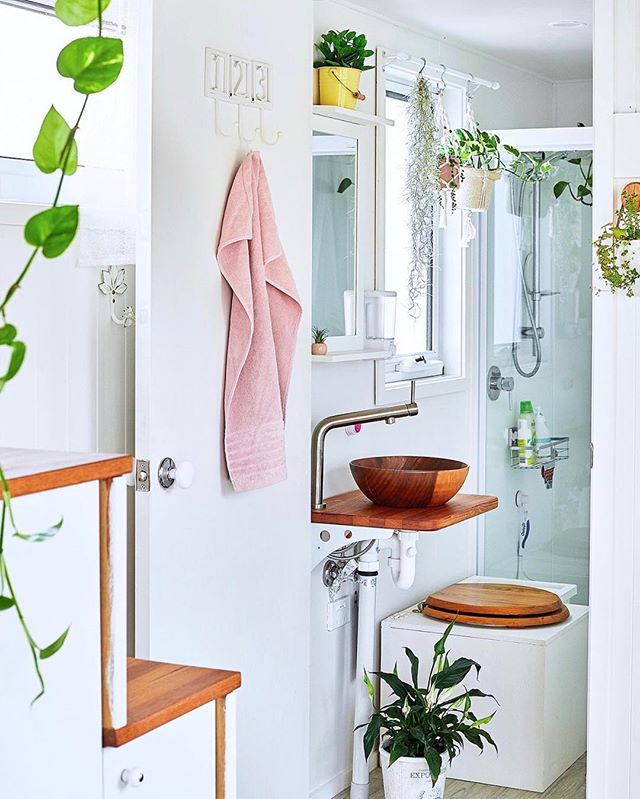 The bathroom is positioned under one of the lofts near the living area, and it, too, will surprise you with how spacious it is. It has a compost toilet and a floating vanity sink. The sink is made out of a wooden salad bowl, and the compost toilet saves around 250,000 liters of water compared to a conventional toilet.

Dolly is most proud of the bathroom, as it was one of her first DIY projects. She would, however, change one thing about it – and that’s the faucet. It extends over the sink and leaves little space for filling containers and washing faces.