Volkswagen has taken their most popular camper, the California, and applied its concept to the next size up in camper vans, refined it further and the result is the California XXL Concept, that the company showed as a world premiere at this year’s ‘Caravan Salon Düsseldorf’ (26 August to 3 September 2017).

The kitchen, the wet room and the living and dining area take centre stage in this mobile home. As, by virtue of the variable package the rear sleeping area is also used as an extended walkway in front of the kitchen unit during the day, this central area grows significantly in size. The large sliding passenger door provides direct access to the living and dining area. A handy feature is the specially designed drawer for dirty shoes near to the door. The kitchen and wet room are to the left of the door and thus right in the middle of the California XXL. 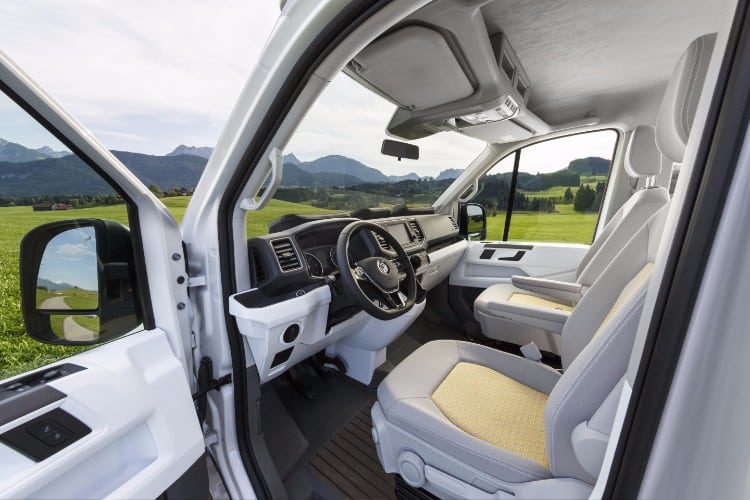 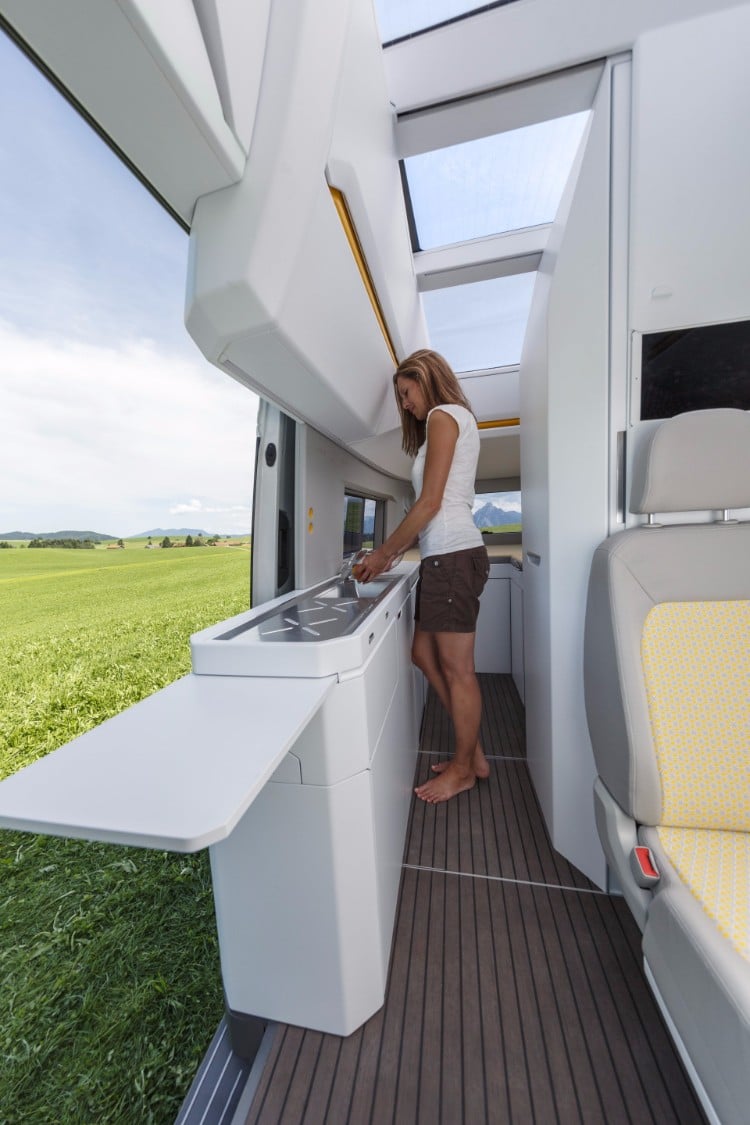 The kitchen is multifunctional and significantly larger than is typical of a Crafter class camper van. Thanks to an extendible work surface that pulls out to the left and a second board that swivels to the right and that folds up to serve as a partition to the sleeping area at night, the worktop in the kitchen can be extended from 1,100 mm to 2,050 mm in total. 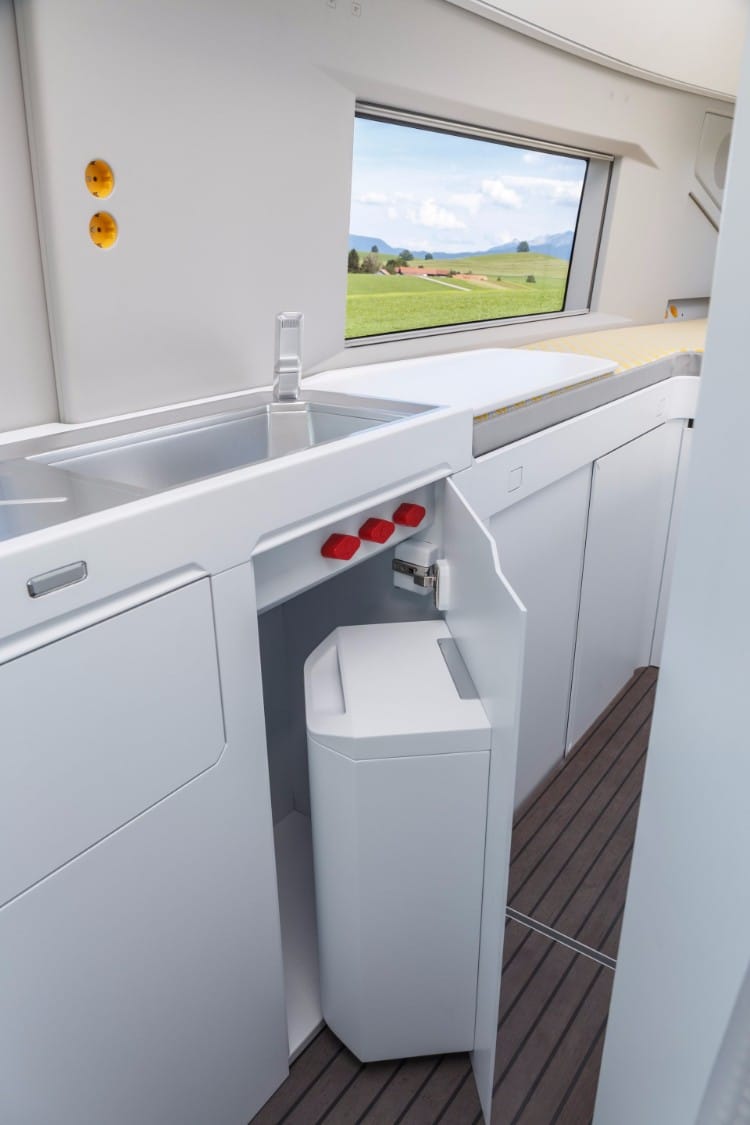 The kitchen area is also fitted with a twin-hob gas cooker, a sink, a double fridge and a host of ingenious innovations. For example, the gas cooker: when you aren’t cooking, the two gas hobs retract into the aluminium surface of the cooker (they are retracted and extended electrically at the push of a button); with a movable chopping board between cooker and sink, it is thus possible to use this area too as a worktop. After use, the chopping board is simply slipped into a specially designed slot in the fridge door. There are two fridges, each with a capacity of 50 litres. The first one is under the gas hob, while the second one is housed within the wall unit over the cooker and the sink, this one also has an has an integrated 4-litre freezer compartment. 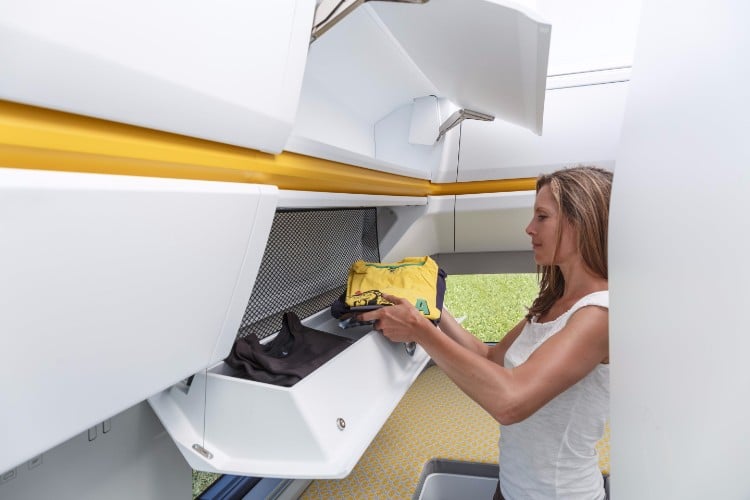 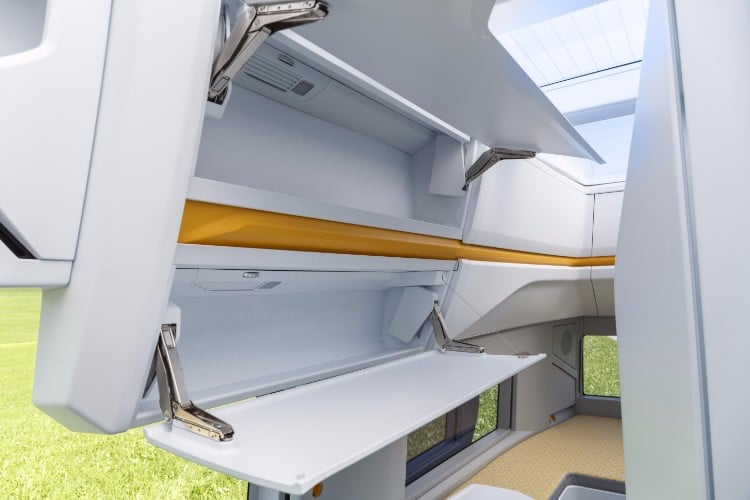 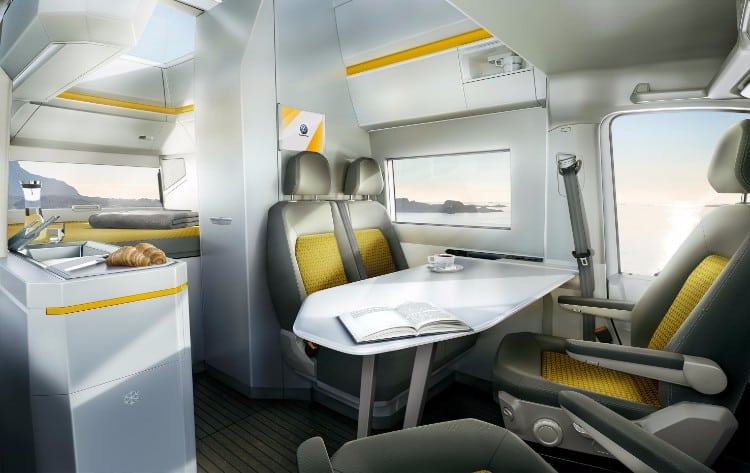 Attached to the back wall of the wet room there is a double bench-seat, which can, of course, also be used while driving. A console above the double bench-seat, where a tablet with the “California XXL App” can be fitted, acts as a digital control centre. This tablet can be used to control a range of vehicle functions. 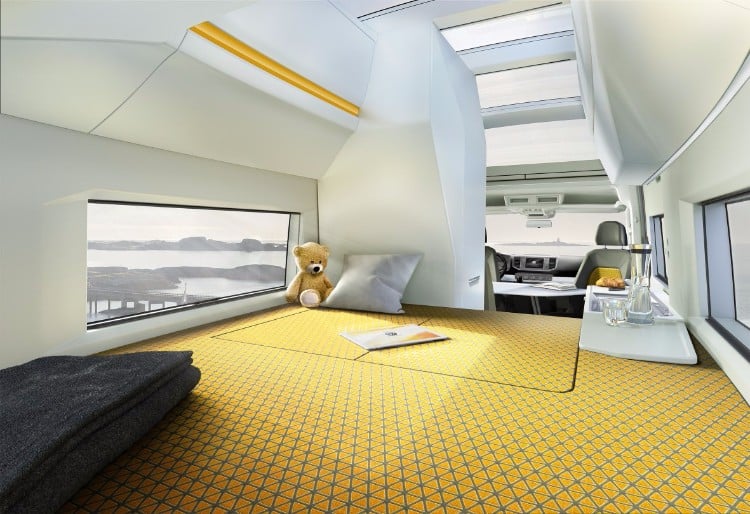 During the day, the bed is stowed away in a storage compartment in the middle section using an easy-to-use folding mechanism to permit access to the 450 mm wide walkway in the kitchen area. This walkway also provides access from inside the vehicle to the large lower rear storage compartment, while simultaneously creating another corner seating unit. 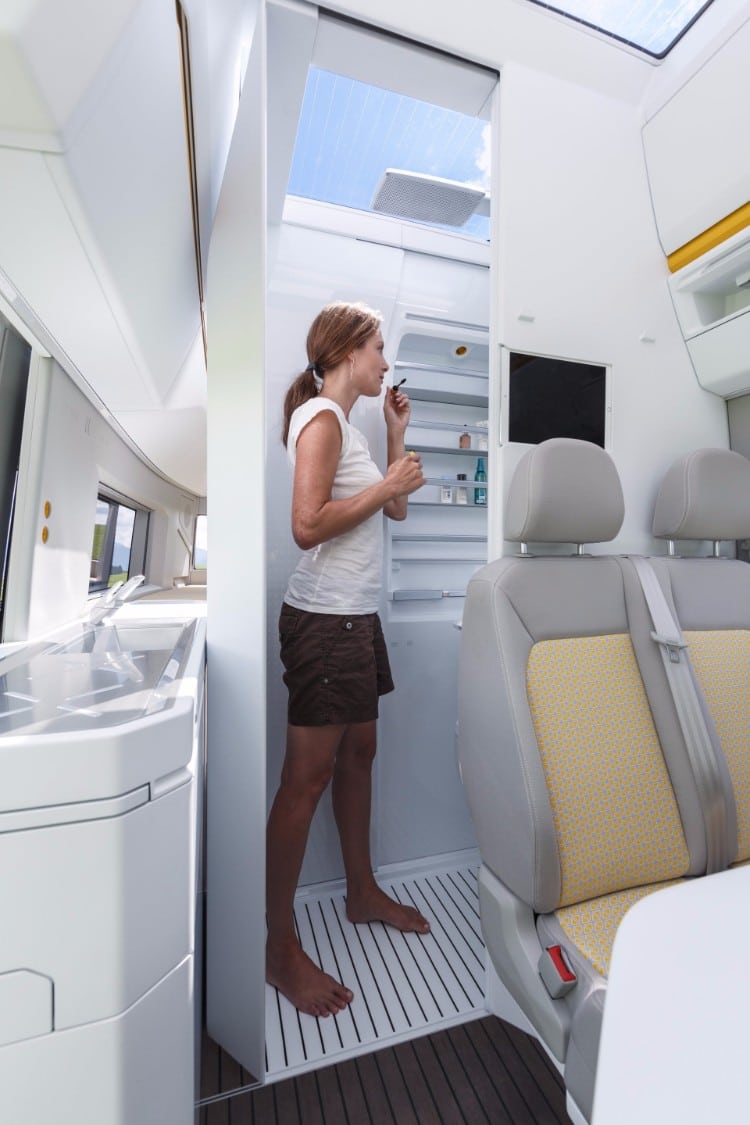 One of the largest challenges when designing a slim camper van that is suitable for everyday use is the integration of a sufficiently large and practically functional wet room. So the engineers and designers at Volkswagen Commercial Vehicles came up with a retractable shower and toilet unit, which looks like a cabinet front when not in use. If anyone needs to use the shower or toilet, the cabinet front is simply pulled out via a handle towards the kitchen unit. Looking at it from the living area, it just looks like a sliding door. The floor of the wet room is also connected to the pull-out compartment. The floor of the living area therefore slides under the kitchen unit when the compartment is pulled out, while the floor of the wet room extends along with the integrated shower tray. When it is extended, the floor area of the wet room doubles, from 600 x 600 mm to 1,200 x 600 mm. 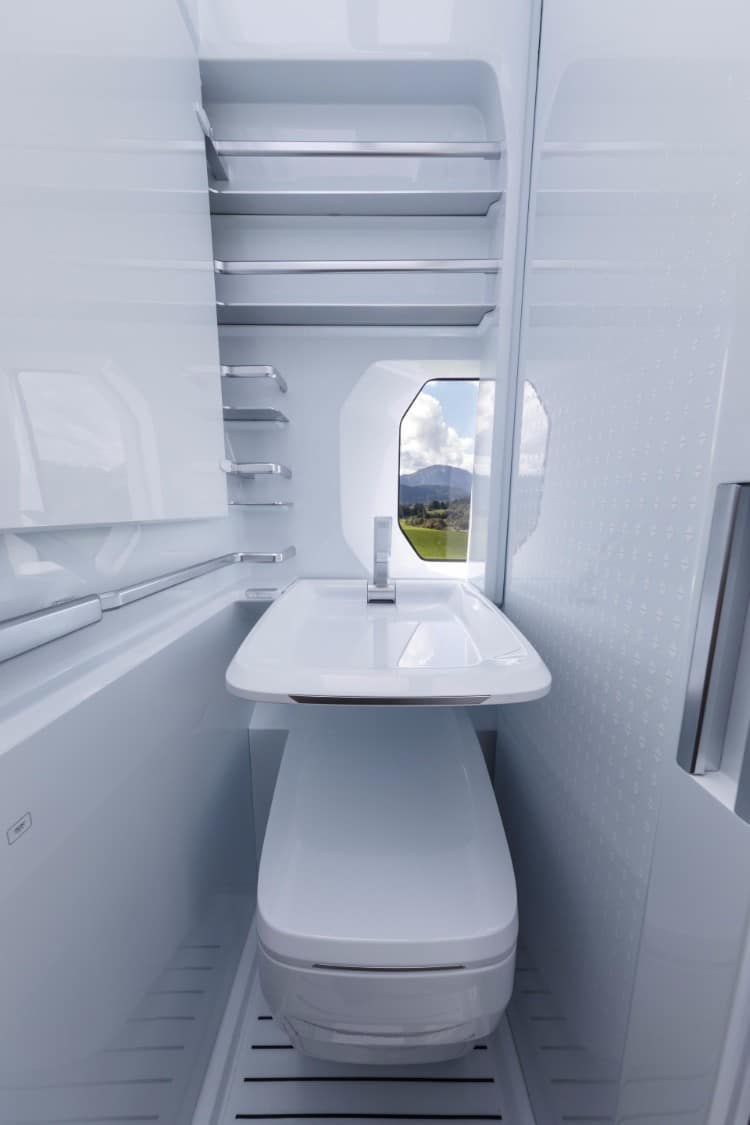 The wet room is fitted with a full-size fixed toilet, which adheres to the pure, sleek design of the whole interior. Fitted above the toilet is a wall-mounted, fold-away sink with a tap that also folds away. As is often seen in kitchens, the tap can also be pulled out for use as a shower head thanks to a hose extension. When it is folded up, the sink disappears behind a swivelling, illuminated mirror. 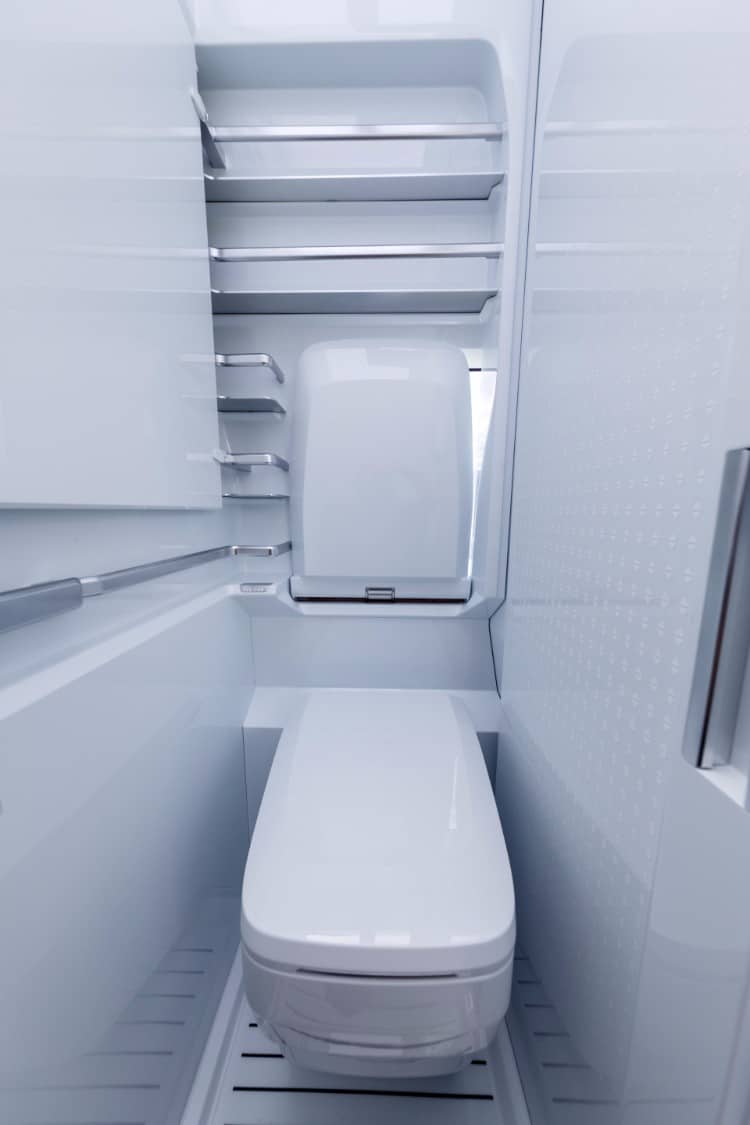 To the left of the sink there is a cabinet, for which the swivelling mirror doubles as the door, and which can be used as a tray for toiletries when open. Located just below the ceiling of the wet room there is a big rain shower head. Hot water is provided by a gas-fired boiler. An electrically controlled skylight window in the roof over the wet room can be completely opened or, if it is raining, slanted towards the back or front of the vehicle to provide ventilation. At night, the extended wet room serves as a partition between the sleeping area and the living area. 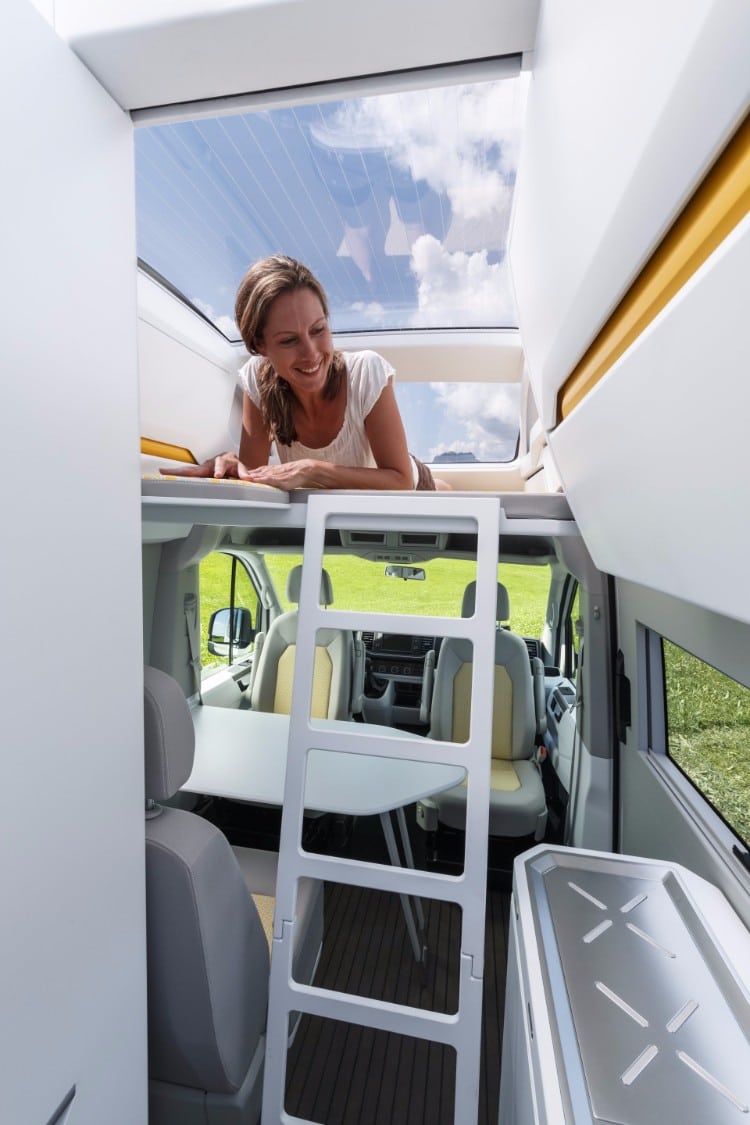 Families with small children or grandparents with their grandchildren will be especially thrilled when on their travels by the alcove fitted with a cot. 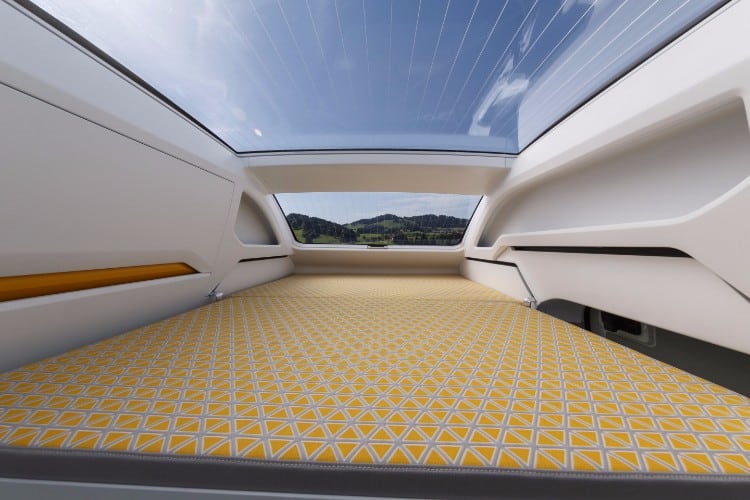 It has a headroom of 600 mm, but thanks to the panoramic roof the alcove appears significantly higher. 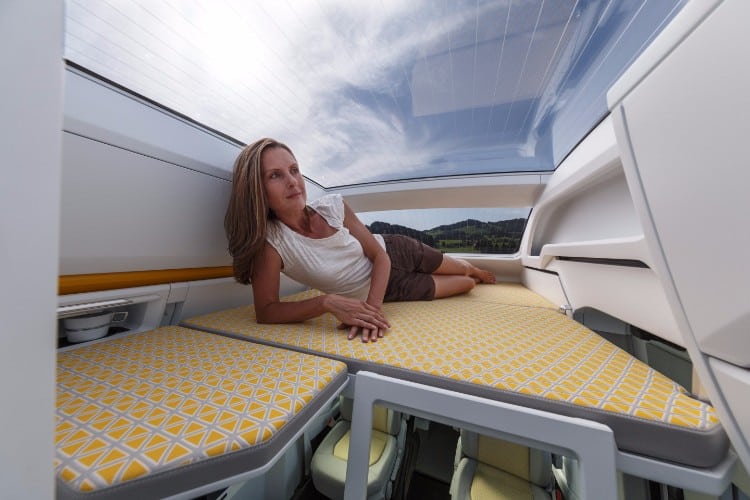 On the left, an extension can be slotted into the bed surface to extend the length of the bed to 2,000 mm, thus providing sufficient space for a teenager. When the bed is not in use, it is ideal for storing bedding, coats, blankets and other soft items. 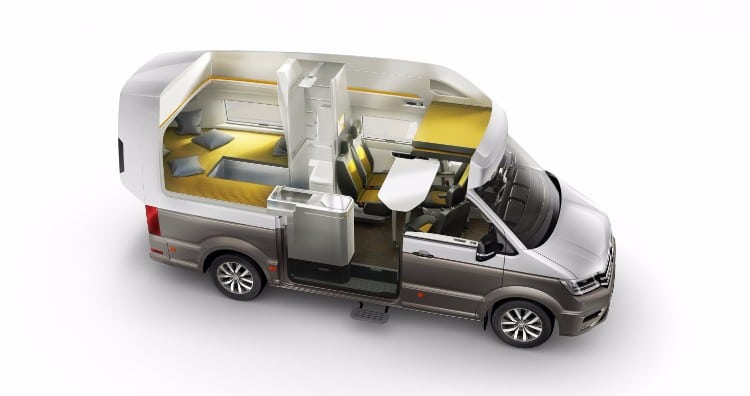 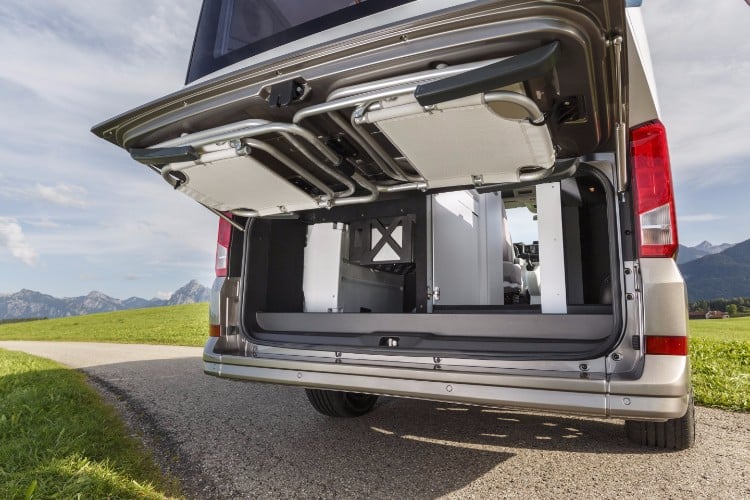 As shown here, two camping chairs can be stowed away compactly inside the tailgate, while the interior table from the living area can simply be removed and attached to the rear panel of the kitchen unit using an extension module when the sliding door is open – resulting in a large open-air table for mild summer evenings.