$5,000 school bus converted into a comfortable home for family of four

Jake and Gianna Bachowski wanted to live life on their terms. So they, along with their daughter Luna, sold everything and decided to live in their converted sprinter van to travel the world.

Two years passed, and they were living a life that some people could only dream of. However, the Bachowskis then discovered they were expecting again. Some people purchase larger homes when their family expands, but the Bachowskis decided to buy a larger vehicle, instead.

They sold their Sprinter and purchased a 29-foot, 2005 Freight Liner school bus with 120 square feet of living space for $5,000. They spent four months converting it with the help of Vera Custom woodworking, and $30,000 later, Buster the Bus was ready for the road.

Before long, though, they were fielding calls from people who wanted help starting their own life on the road. As a result, OTR Lifestyle Consulting was born. They now make a living out of helping people transition from house life to on-the-road living.

They are more than happy to share their insight on how to make a bus functional, but also how to find dump locations, make use of online resources, and more. If their bus interior is anything to go by, they are more than qualified for the job. 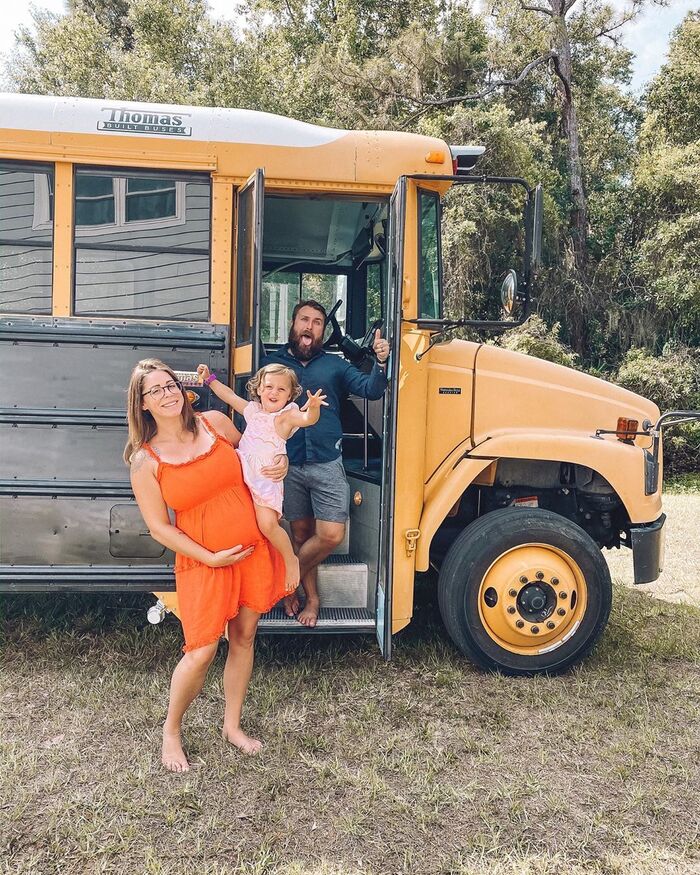 Jake and Gianna Bachowski were a family of three in a converted Sprinter van. With baby number two on the way, they spent $5,000 on purchasing a 29-foot, 2005 Freight Liner school bus with 120 square feet of living space. They then spent $30,000 to make it home. 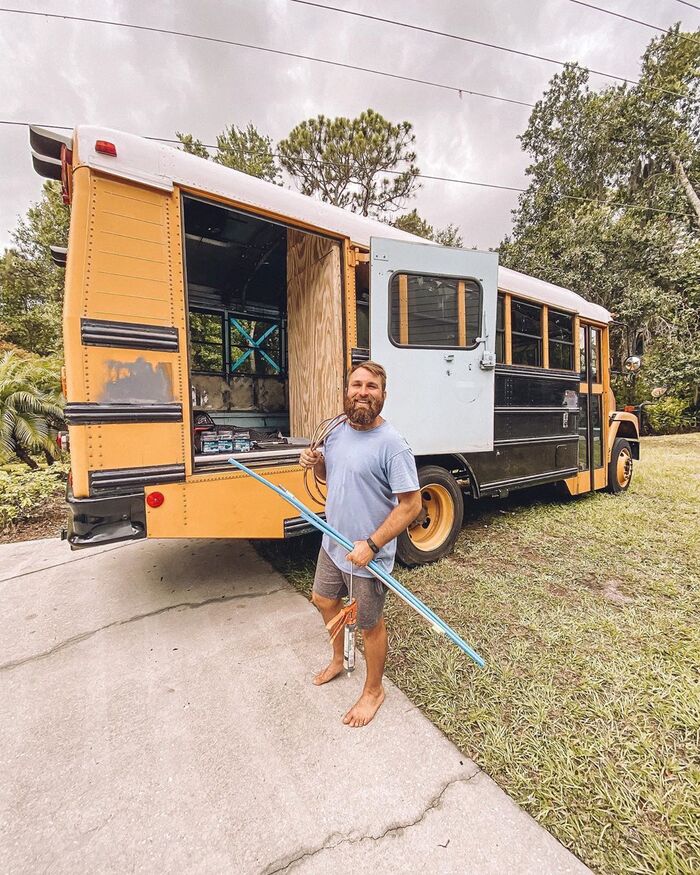 The off-the-grid house on wheels has as a 100-gallon freshwater tank in the rear on the driver’s side and a 55-gallon grey tank on the opposite side for balance. 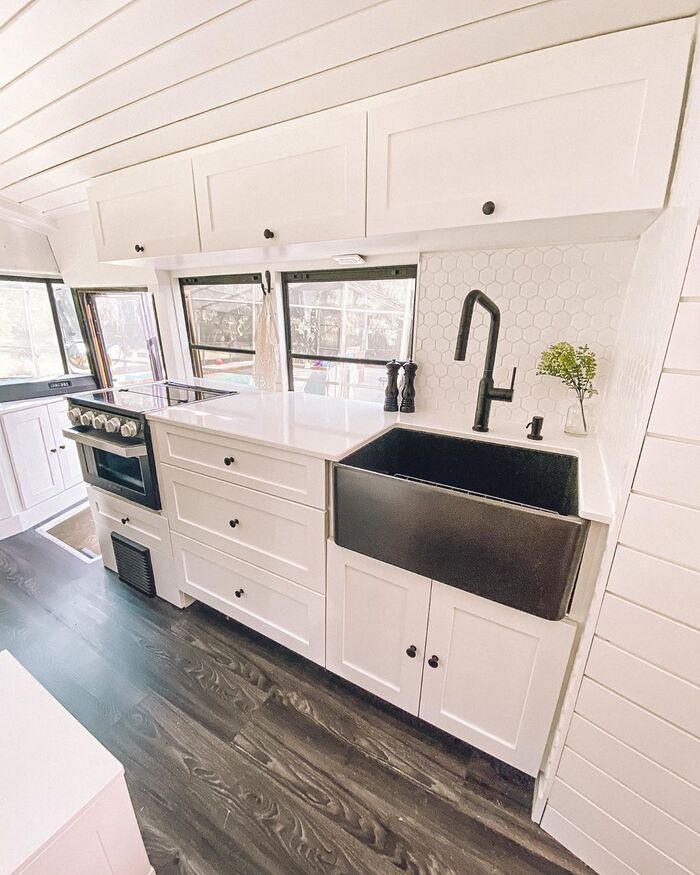 The kitchen is the heart of any home, and a bus is no different. The Bachowskis’ kitchen has a three-burner cooktop, ample counter space, a built-in soap dispenser, and a pull-down spray faucet. They also invested in 70-pound magnets to stop drawers opening during transit. 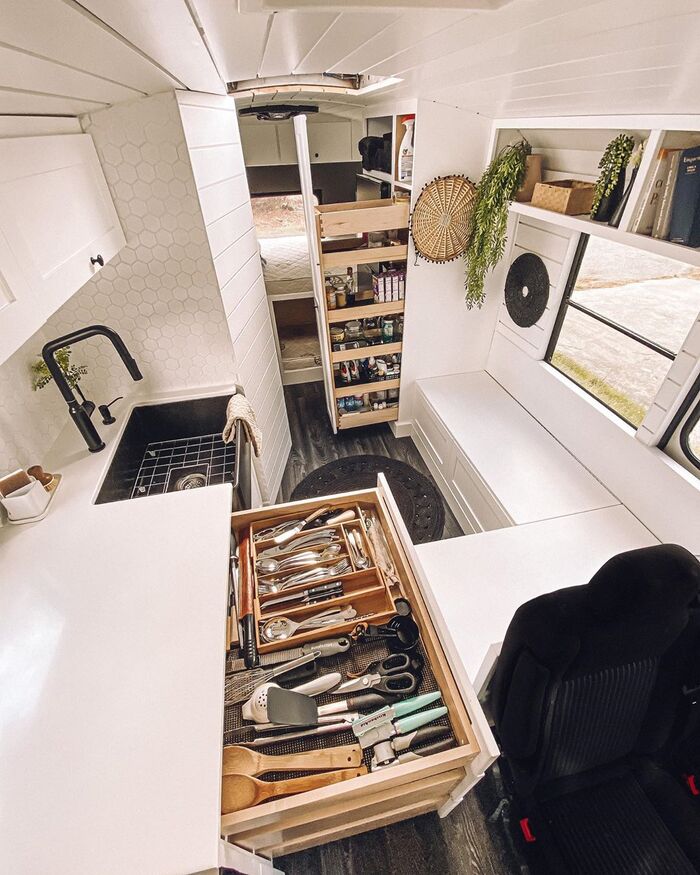 The Bachowskis never wanted their bus to be filled with clutter, so they streamlined everything they owned. Everything has its place within the 120-square-foot bus, and you’ll never find anything out of place. They also make use of furniture that has multiple purposes to make sure they are getting the most out of their space. 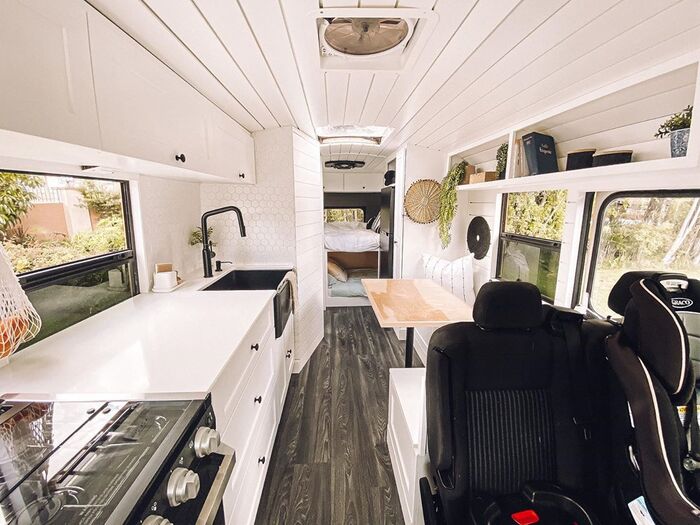 Natural light is a huge drawcard of this house on wheels. While they are yet to master how to keep the bugs out, they have windows throughout the bus and a polycarbonate dome skylight in the roof. 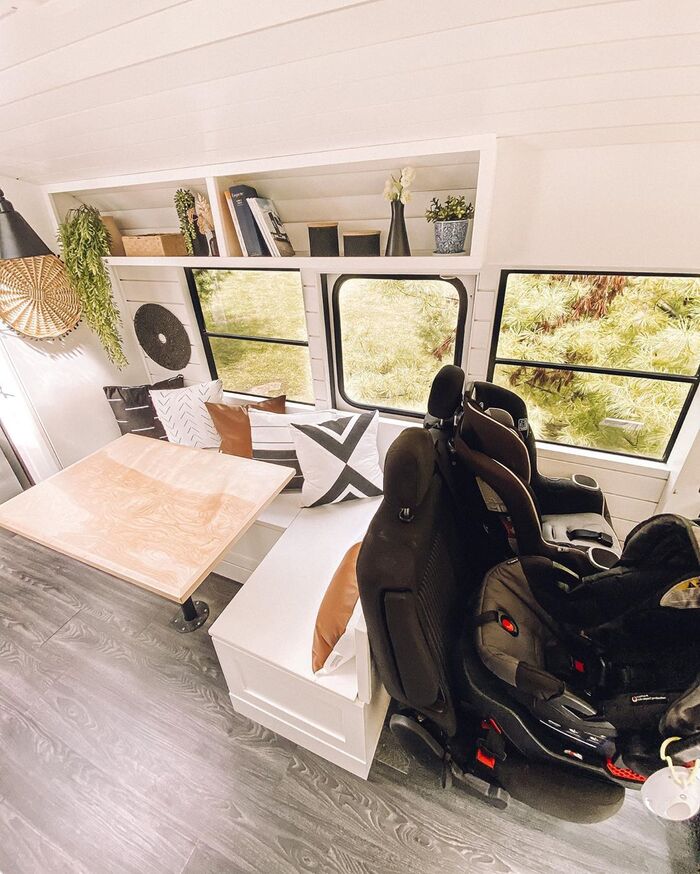 Traveling with children requires car seats, but it can be a lot of hassle and fuss to remove them to make use of the benches. Gianna and Jake purchased a bench seat for the very purpose of housing the car seats during road trips. 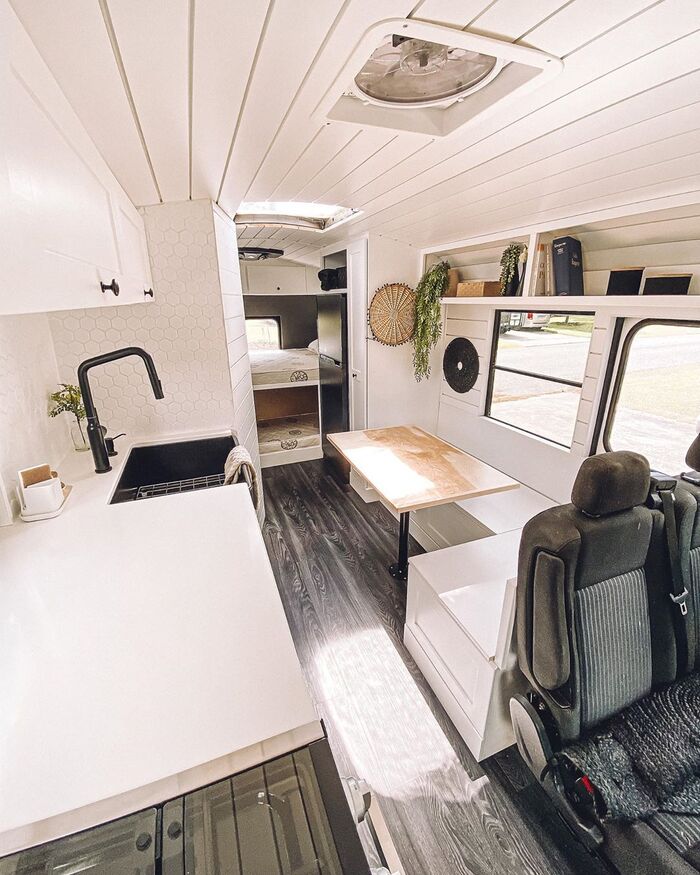 Jake and Gianna wanted their living space to be multi-functional. So, they made their tabletop and table legs removable. The extra space meant the kids could relax on the floor on a rug and play with their toys. 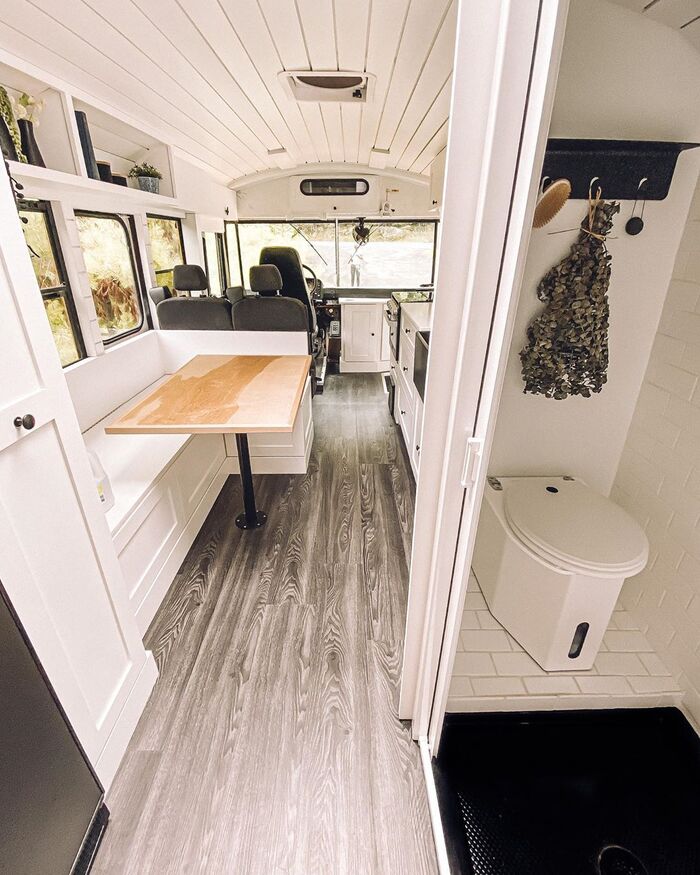 The family get asked a lot if they recommend having a bathroom in our bus and the answer is YES. They have found having an all-in-one wet room to be best for them because everything is contained to one room. The bathroom has a space-saving sliding door 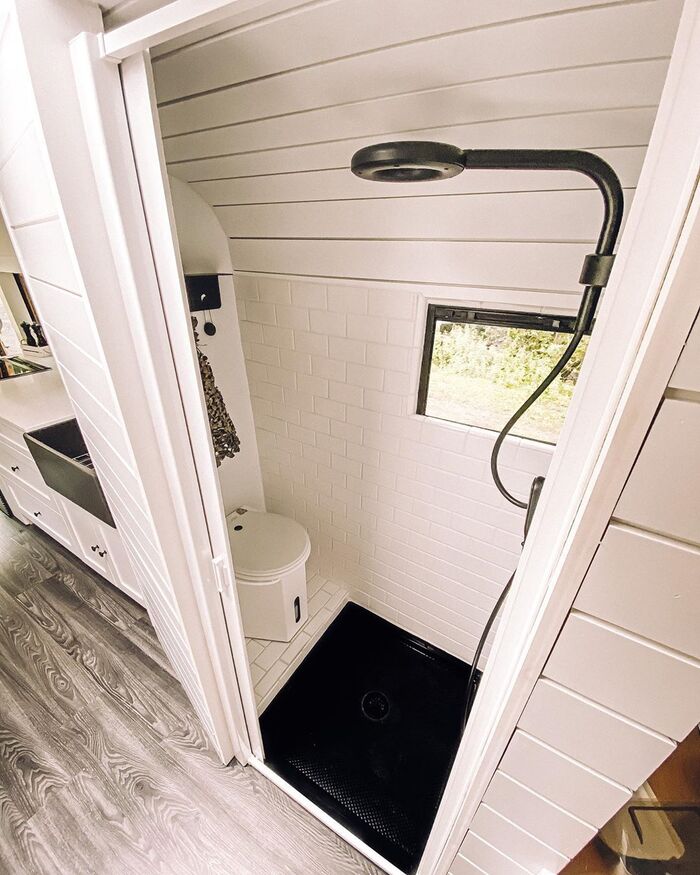 The couple also did a lot of research on what would be best to include in their bathroom. They couldn’t guarantee they would always be near public facilities. They opted for a water-efficient showerhead and a C-head composting toilet that would be easy to maintain. 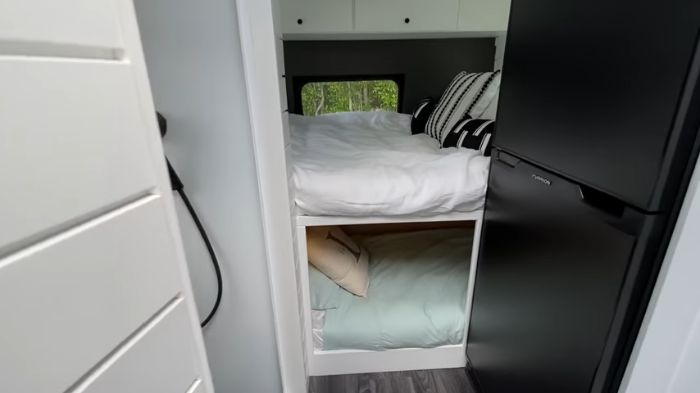 As Jake and Gianna’s children are still young, they have a toddler’s bed below their bed. Their newborn also sleeps in a bassinet. Custom mattresses were carefully selected from The Custom Mattress Factory.