Architecture student Hank Butitta got tired of drawing buildings that would never exist for imaginary clients, so for his Masters Final Project he purchased an old school bus on Craigslist for $3000. 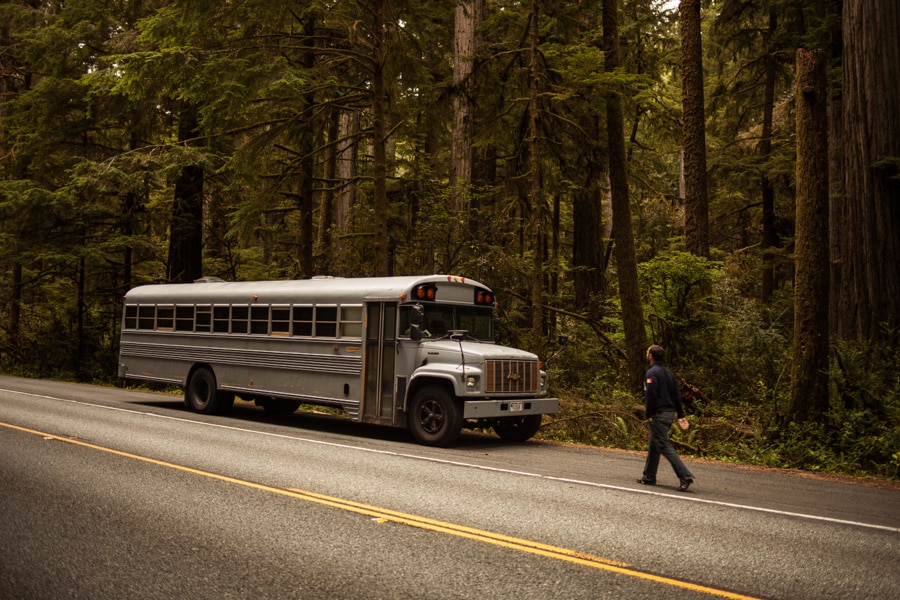 After 15 weeks, $6000 and a lot of work the bus is now converted into a tiny living space.

The even spacing of the window bays allow for the volume to be broken down into modular units of 28 inches square, leaving an aisle that is also 28 inches wide. The modular units are then grouped to create four primary zones: Bathroom, Kitchen, Seating, and Sleeping. 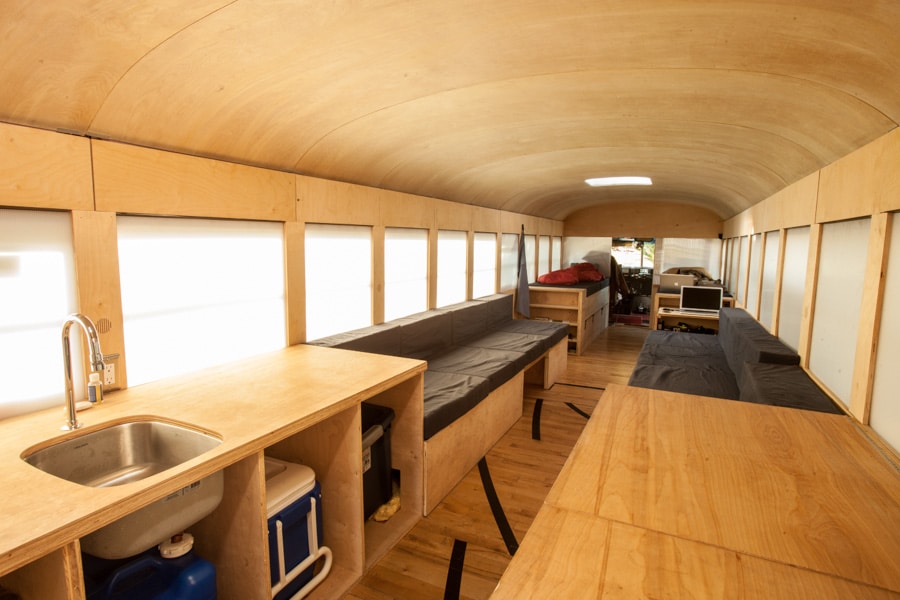 The seating space is one of the most versatile, and as it occupies four bays, it is also the largest. In it’s neutral state, the zone features four large seats on either side of the aisle. The two seats nearest the kitchen occupy the space over the wheel wells, and as such have no storage underneath.

However the faces of these seats fold out into the aisle to create a platform that can be covered with neighboring cushions to create a queen-sized sleeping area. The next seat down on either side of the aisle can be raised or lowered to create a table surface for eating or working. This allows for up to four people to have table space without having to climb over each other. The final seat features a large lockable storage bay underneath. The flexibility of this zone allows it to accommodate a large number of conditions and situations. 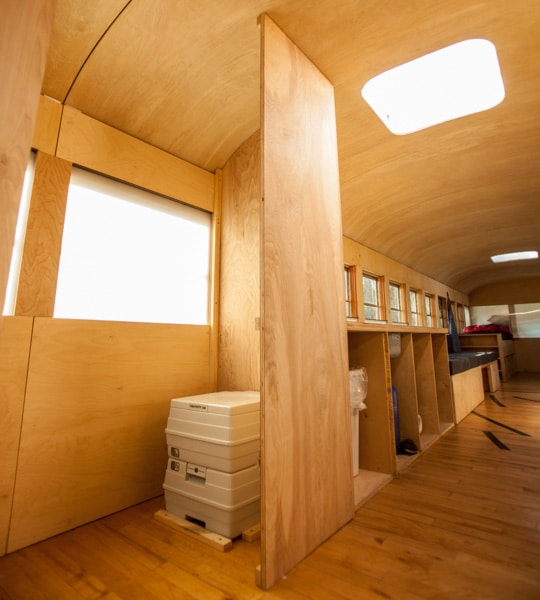 In order to help remove the inhabitant from the reminders and connotations of its former life as a school bus, entry into the space is reoriented to the rear. Upon entering the space, the occupant first encounters the bathroom. In this zone, one side of the aisle is walled off to enclose the toilet. This space currently houses a yet-to-be-used portable toilet, but will hopefully be replaced by a plumbed toilet in the coming years. The opposing side of the aisle is unoccupied, and is currently serving as overflow storage. 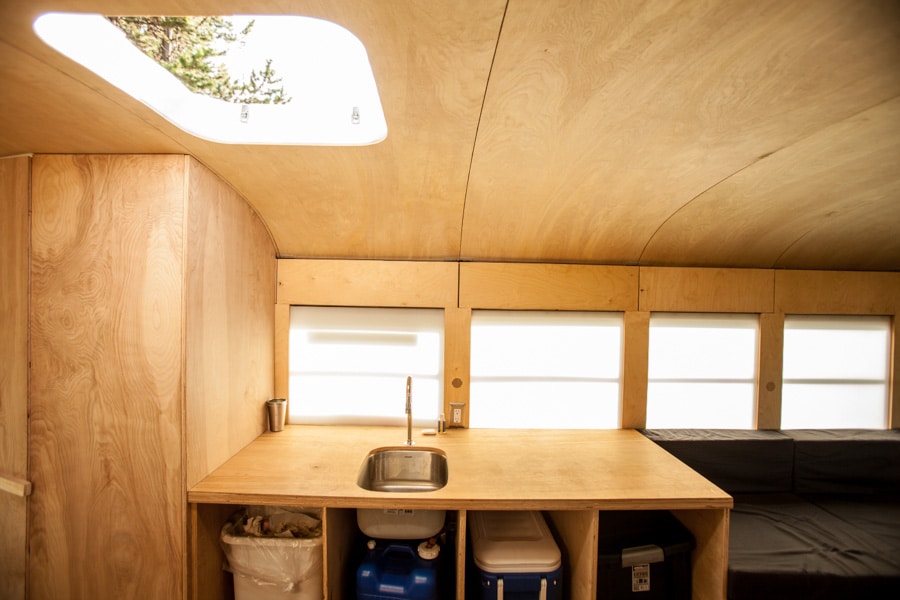 The sleeping space is comprised of two narrow beds, of equal width, on either side of the aisle. There are drawers beneath each each bed, deep storage underneath the mattresses, and built-in shelves facing the seating area. In order to accommodate varied sleeping arrangements, the port-side bed rolls into the center aisle, creating a queen-sized sleeping area, with a third mattress revealed in the vacated space. This allows for a total sleeping capacity of up to six adults. 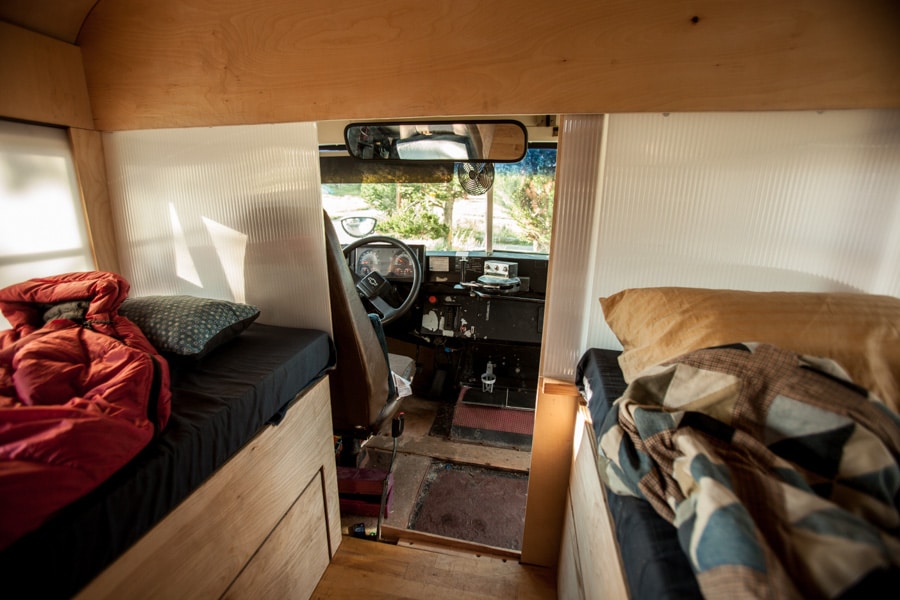 The cabin of the bus almost entirely untouched, except for the rats nest of wires from the added electrical systems. The cabin can be separated from the living space by a sliding door panel, which is left open while on the road to communicate with the driver.

Right now Hank and some of his friends have embarked on a 5,000-mile road trip and you can follow his journey on: www.hankboughtabus.com