Therefore, it made sense to purchase a city bus and turn it into a house on wheels. In May 2018, that’s exactly what they did.

Chris, Vaida, baby Oliver, and Boris the dog are a family unit travelling the country and living the coveted off-the-grid lifestyle. Chris is an environmental scientist and biologist, while Vaida is an online business owner, graphic designer, style enthusiast, and self-described sustainable fashion nerd.

In just six months, they downsized their possessions, got rid of their debt, and turned a bus into a home to tour Australia. As their adventures began, they documented them in videos, photos, and blogs.

Vaida and Chris say that travelling as a family in a motorhome comes with challenges, costs, and sometimes risks. They have to make sure everything stays securely in place, and they have to find places suitable for an off-the-grid bus.

All in all, though, they say such a life is not that much different from sharing a home with flatmates or living in a small one-bedroom apartment. It just means they can have far more adventures while choosing where they want to be. 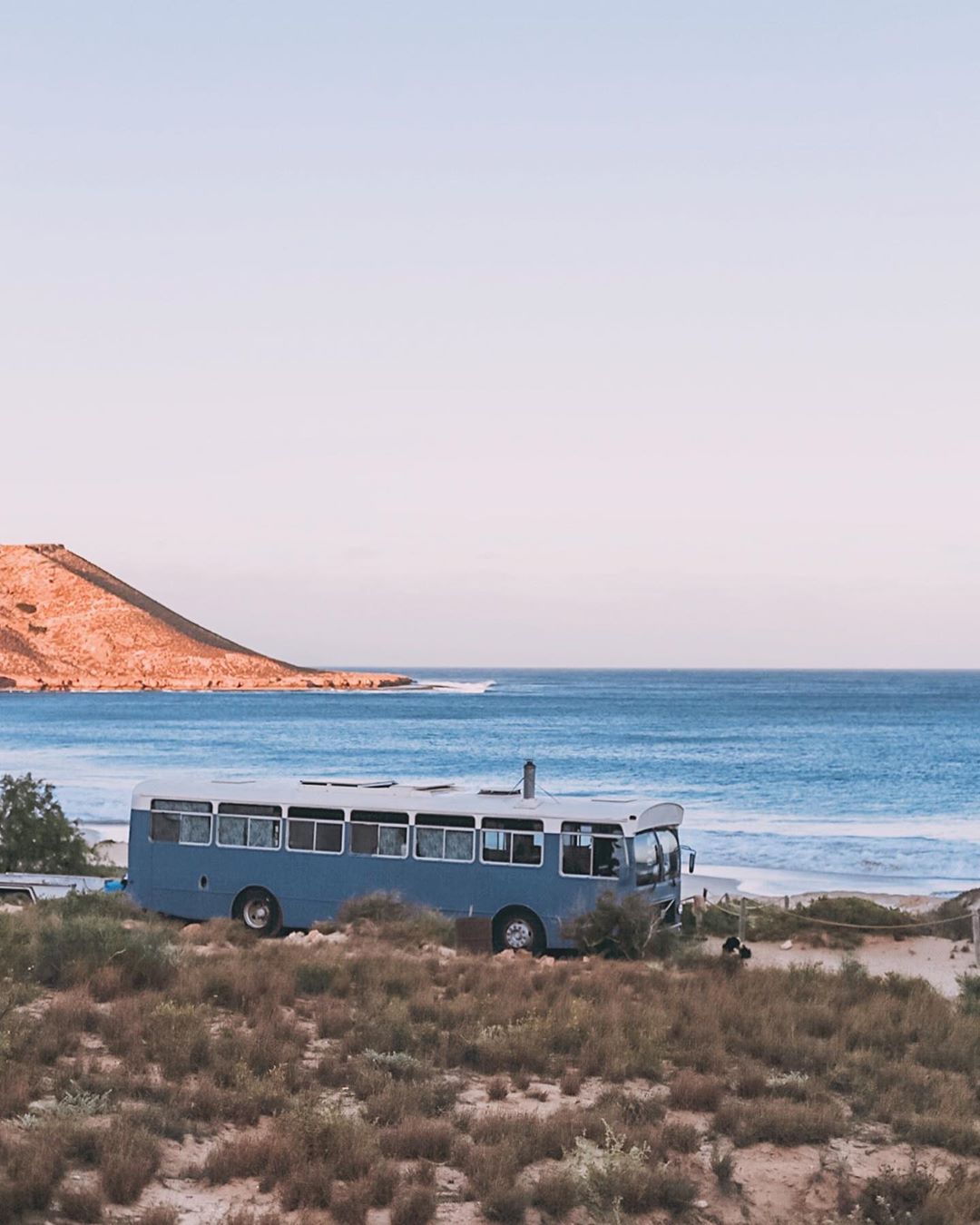 Chris and Vaida purchased an old city bus in May 2018 and converted it into a house on wheels for them, their baby Oliver, and their dog, Boris. They had a limited budget and timeframe, but they succeeded in creating a comfortable off-the-grid haven with 800w of solar power, 350 litres of water, and 20kgs of gas. 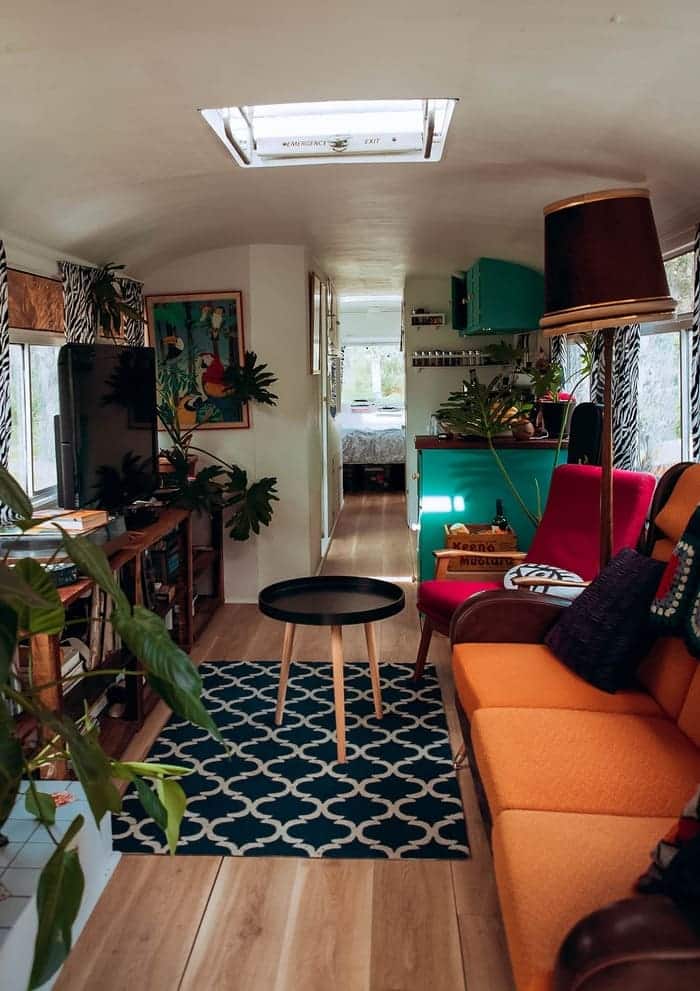 Chris and Vaida wanted to make their old city bus a Paris-style apartment on wheels. They wanted it to have an abundance of natural light, but also plenty of colour. They had seen many neutral, whitewash-style motorhomes but wanted to go in the opposite direction. 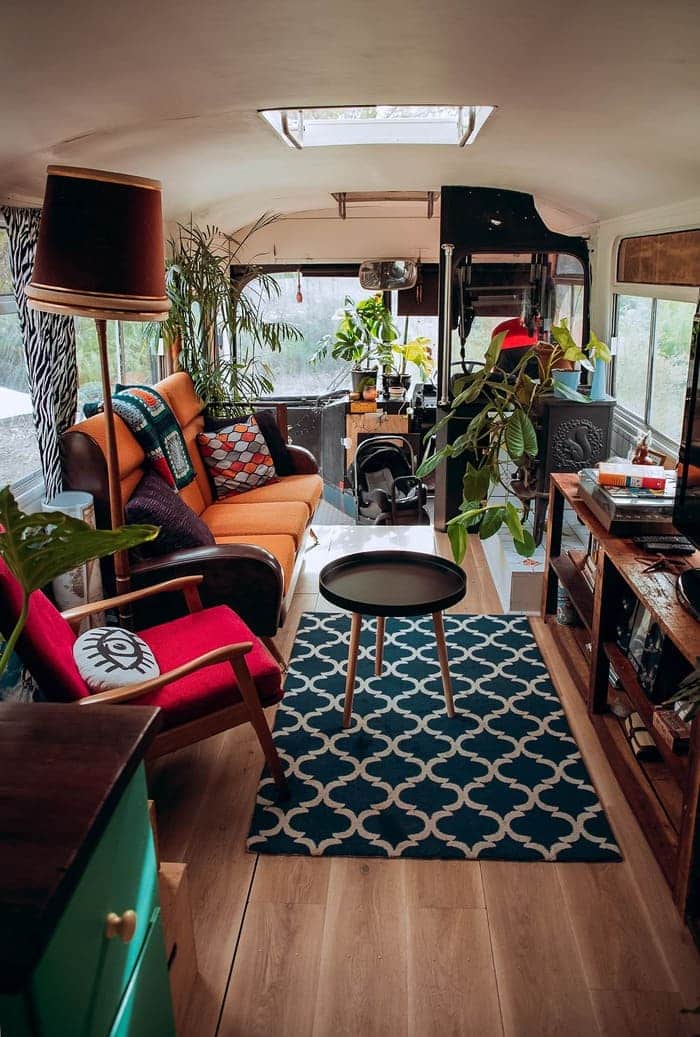 The vibrancy of the motorhome is hard to deny. The natural wood flooring adds a sense of calm to the boldness of the lounge furnishings and vibrant floor rug. 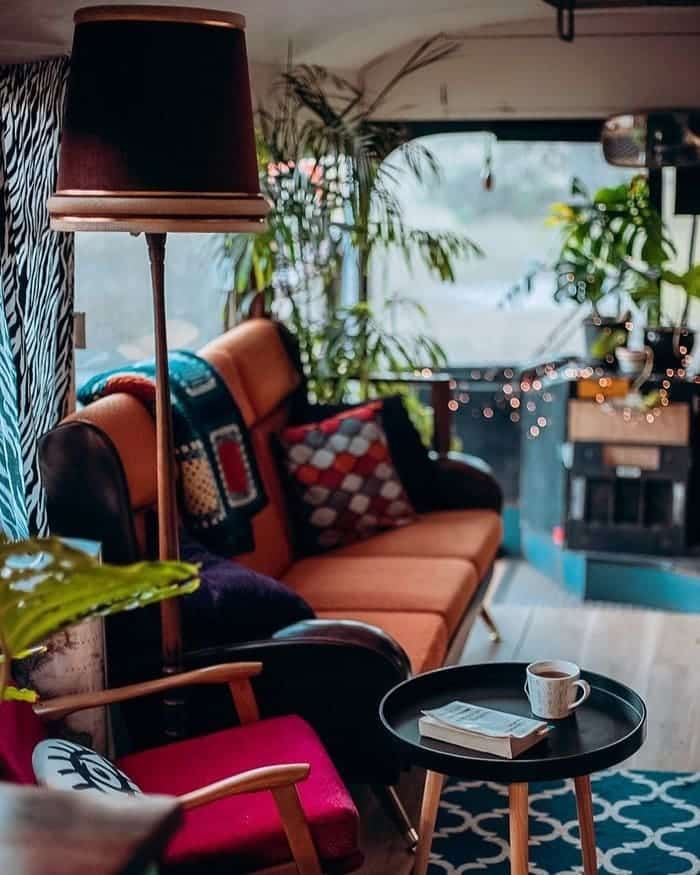 The burst of colour in the living space makes a refreshing change from the sterility of some new motorhomes built today. 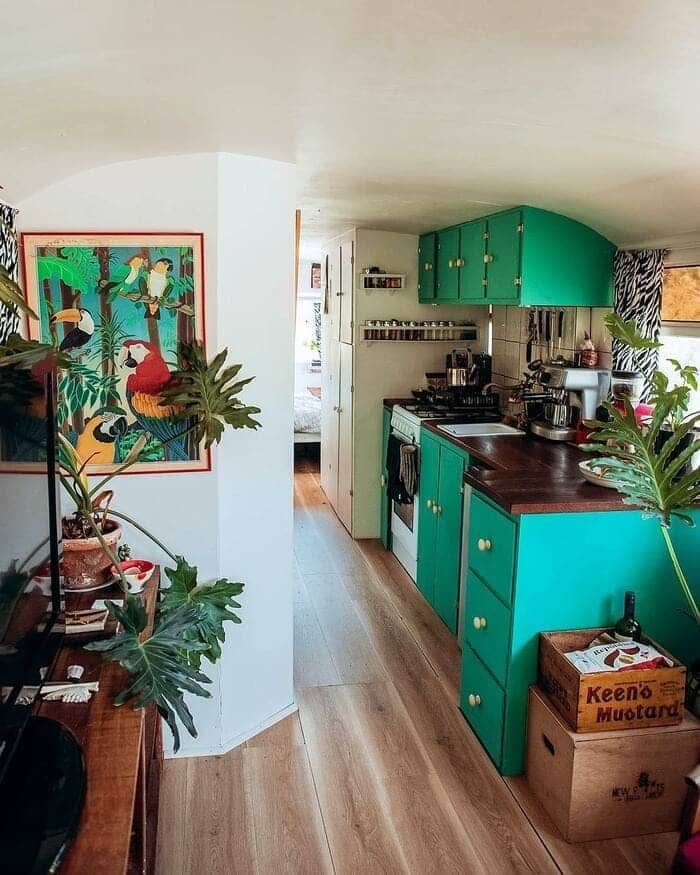 Chris and Vaida chose plywood for their walls, cupboards, and doors because it was easy to cut and available in various thicknesses. They also liked how it was straightforward to paint and could look stunning with different doorknobs and hinges. 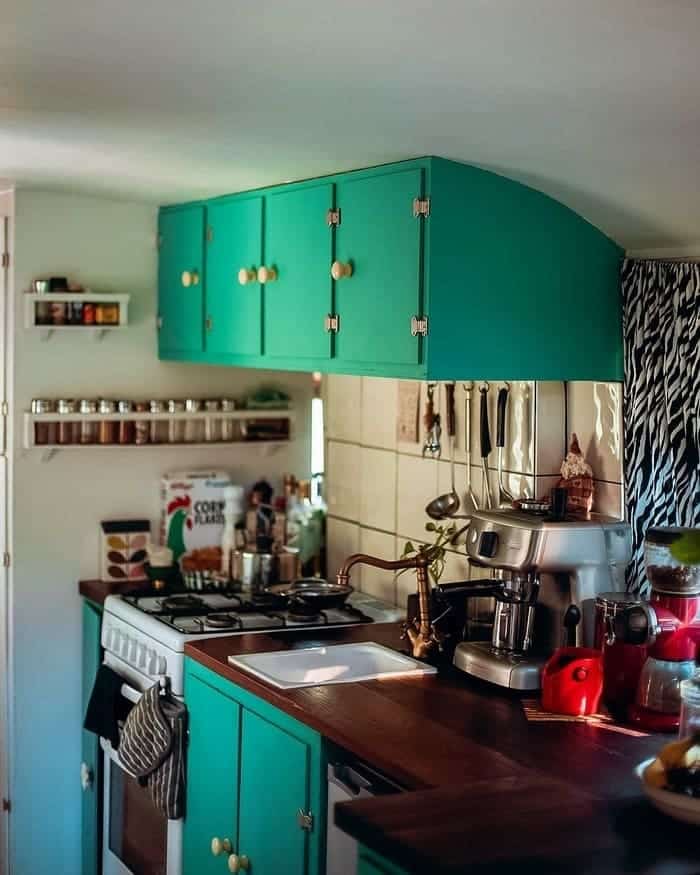 They used jarrah wood, native to Western Australia, to craft the kitchen bench. They salvaged this material from a house demolition. The wood adds a homely feel while also welcoming nature into the space. 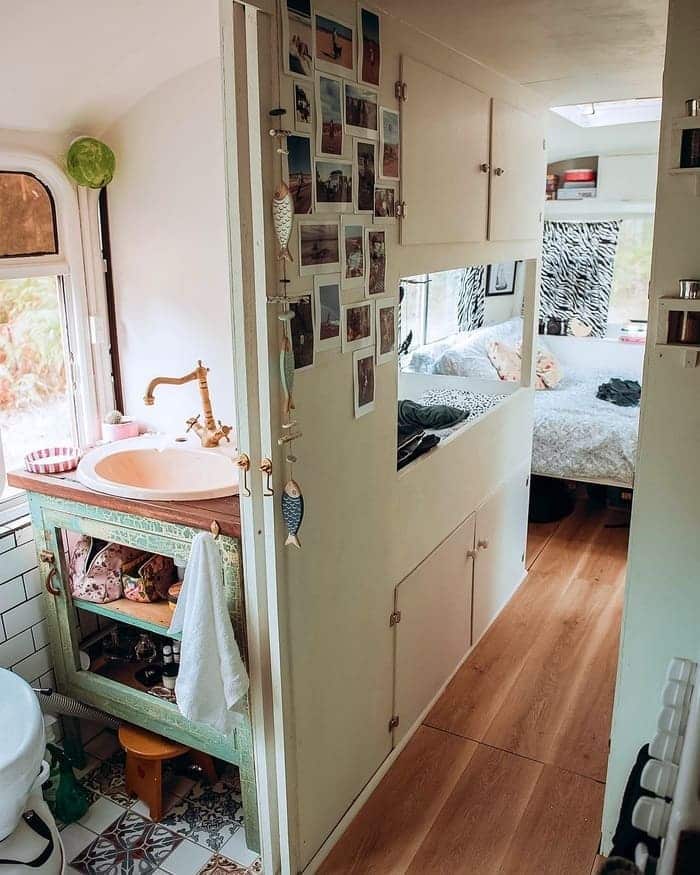 The bus layout flows seamlessly from the main living quarters to the sleeping area and bathroom. 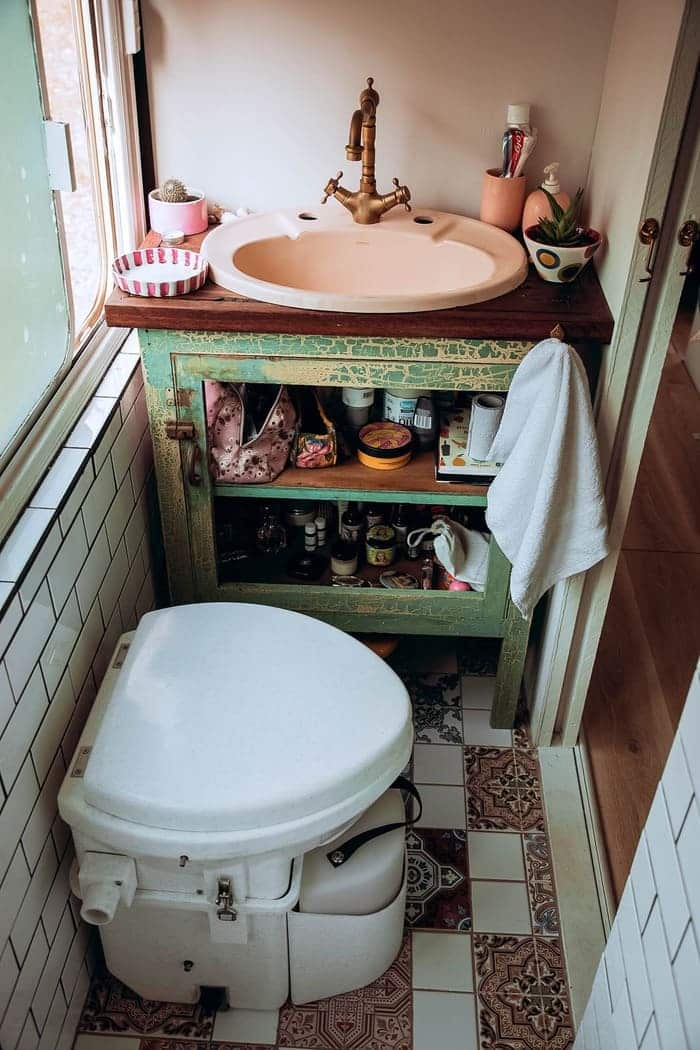 The choice of toilet was very important to Chris and Vaida. They opted for a Nature’s Head Toilet, which is waterless, compact, easy to install, and doesn’t have a holding tank. For sustainability, this toilet ticks all the boxes. 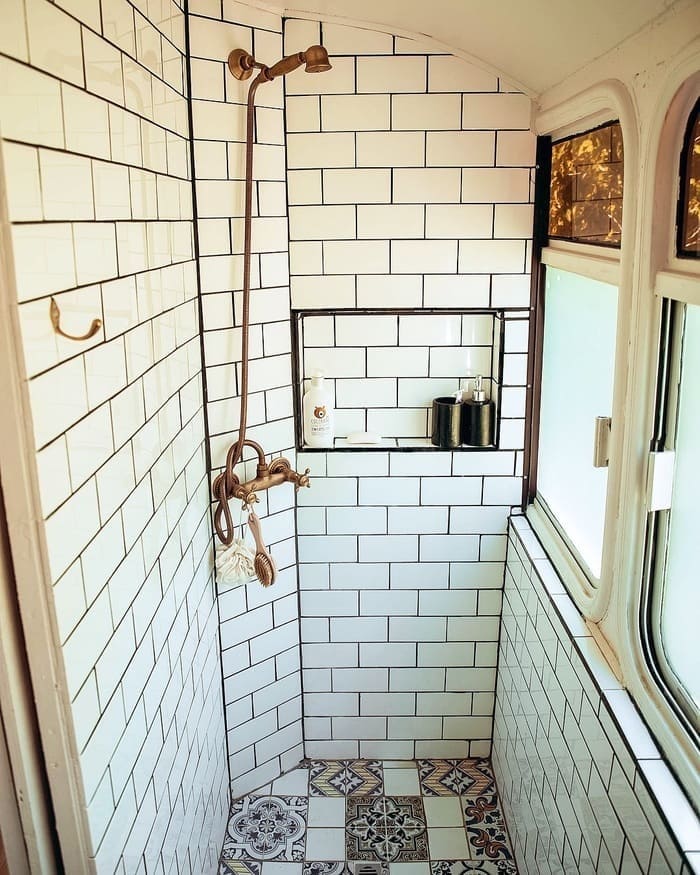 The bathroom in the city bus is as elegant and contemporary as you would find in any home. The tiles and taps were brand new, but many other features in the bathroom and throughout the bus were sourced secondhand. 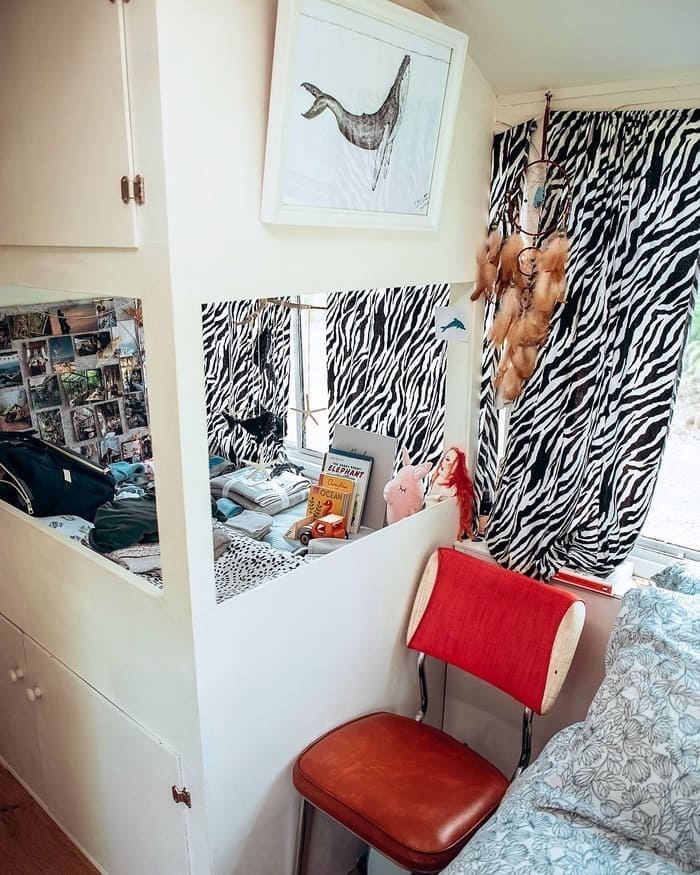 The bedroom is a funky space with plenty of colour and storage for the family of three + a dog. 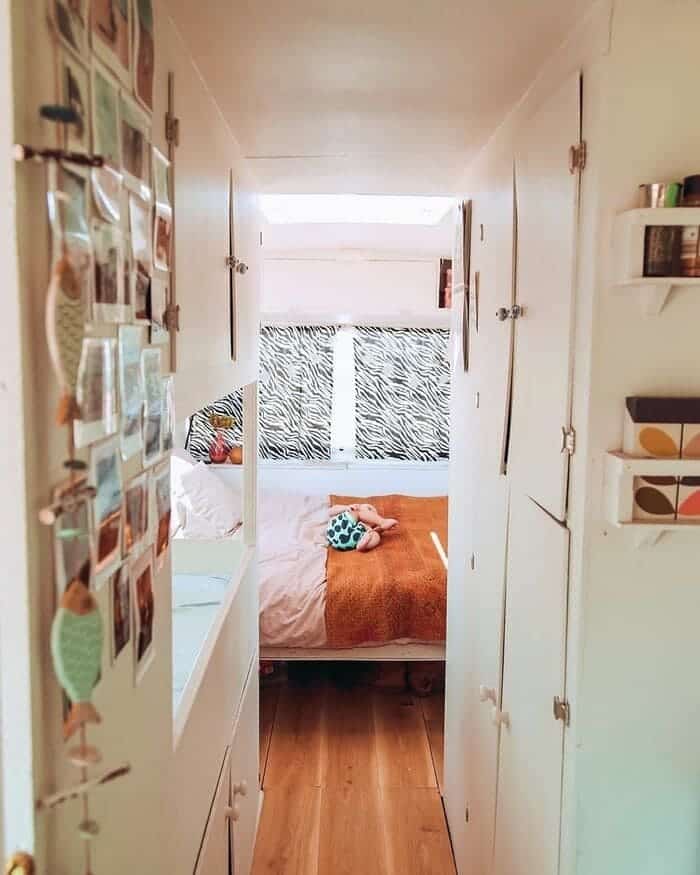 Storage is certainly not lacking in Chris and Vaida’s house on wheels. Floor to ceiling cabinetry line the walls leading to the sleeping quarters of the bus.