What do you do when you want to travel, but you also want to enjoy the rustic appeal of a cabin? You combine the two and create a cabin on wheels.

So, that’s what British couple Laura and Aron did. They purchased a grey Minus Sprinter, spent £1,300 ($1700) converting it into a mobile home, and are now enjoying exploring the countryside. 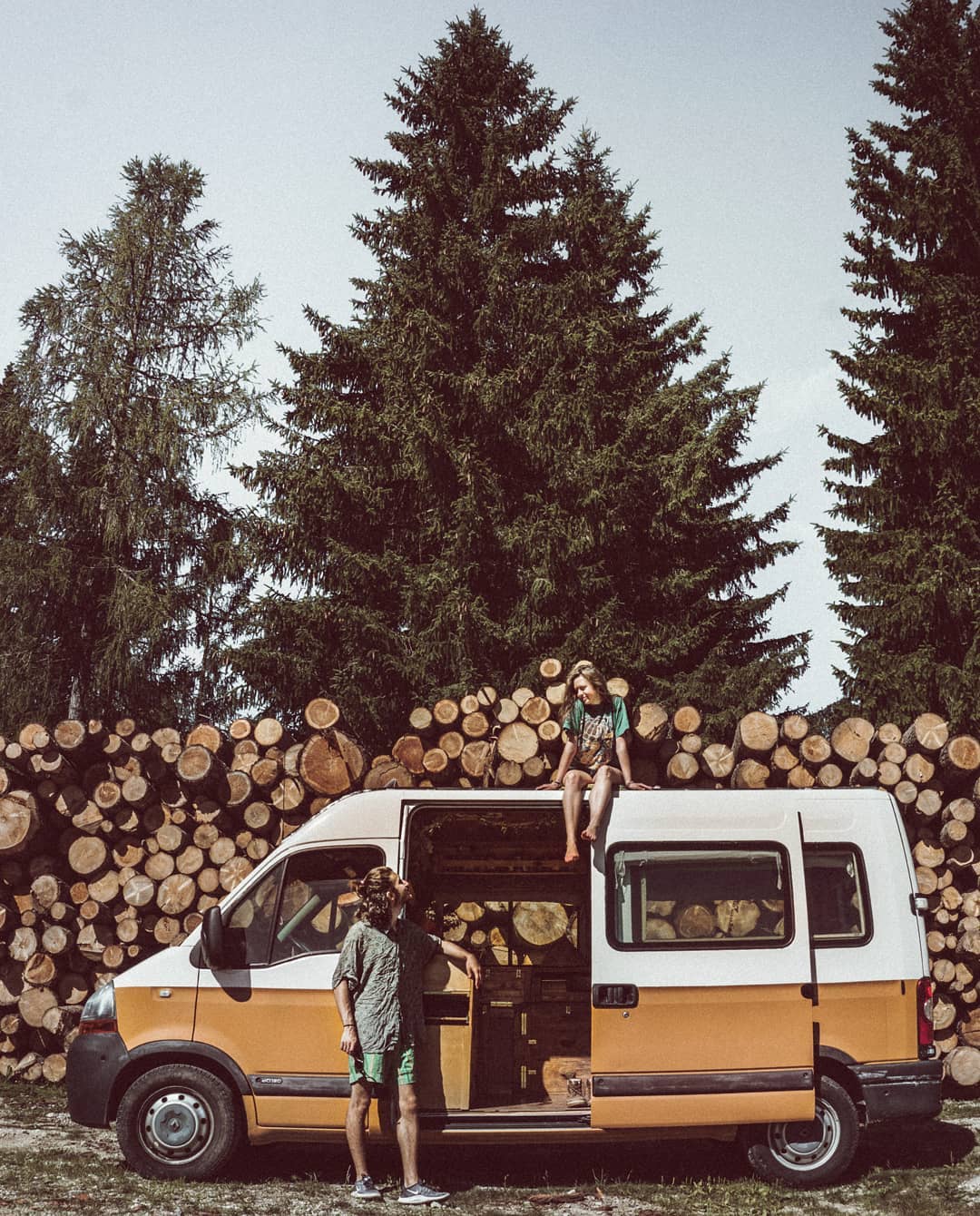 While there was nothing wrong with the van’s colour scheme, it wasn’t what Aron and Laura had in mind. However, they had been quoted a minimum of £2,000 to have it professionally painted, so they decided to give it a go themselves.

They visited an auto paint supplier and found two colours to create a two-tone appeal – cinnamon orange and standard cream. They did, however, make sure they prepared the van as best as they could beforehand.

They wet-sanded back the original color using sanding blocks with 800-grit sandpaper. They then spend a lot of time masking the van so that it was ready to paint.

In a traditional auto finishing business, vehicles are painted using spray guns. However, Aron and Laura decided to use a roller. They purchased a concave superfine foam roller and carried out the painting process over several days in their garage.

They do have a few distinct lines left over from the masking tape, but they plan to finish sanding and buffing to achieve the final look, along with some floral detailing, once they return from their first trip. So, instead of paint £2,000 for someone to paint the van for them, they spent a total of £150. 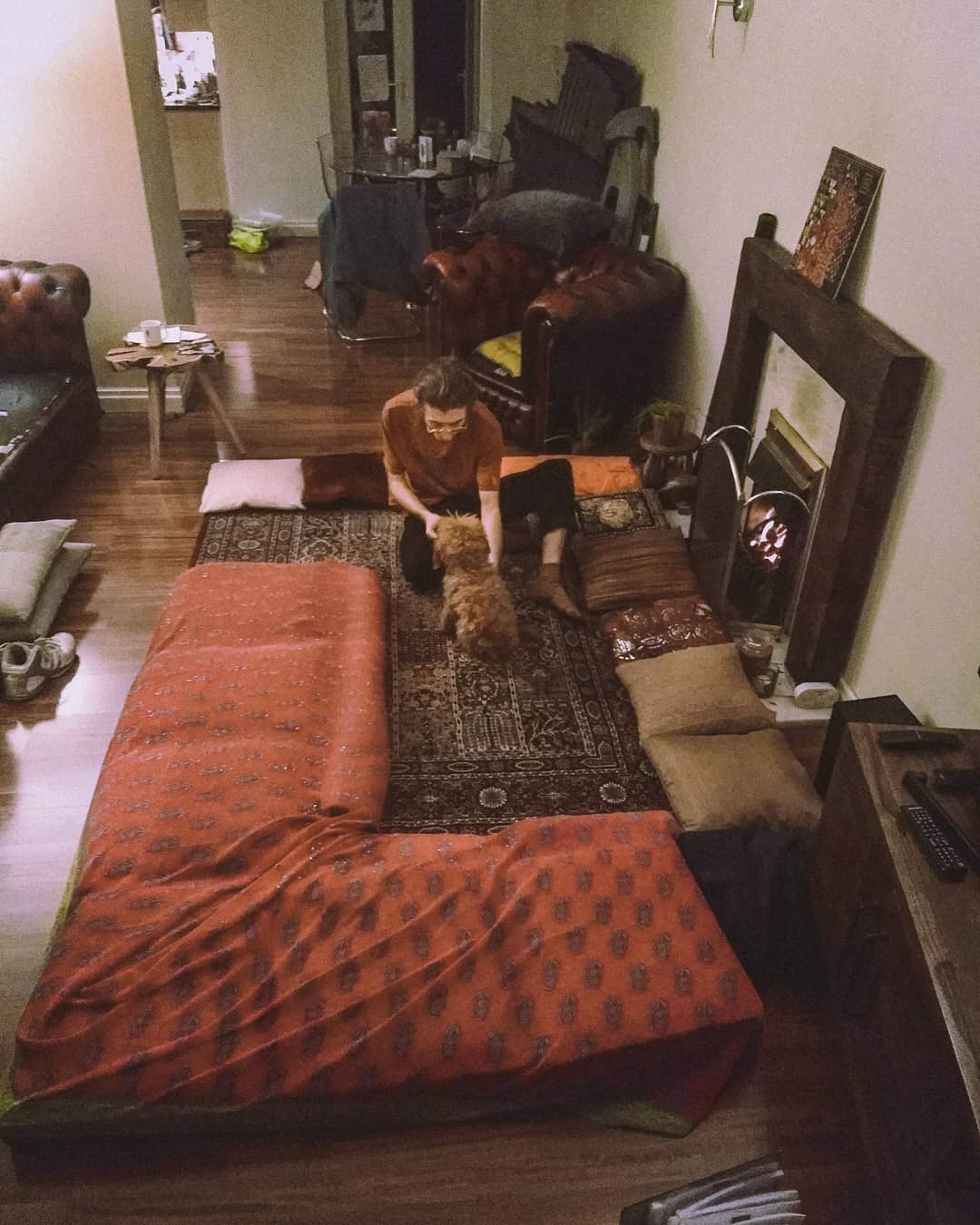 Aron and Laura are by no means experts when it comes to turning a van into a motorhome. However, even though they used unconventional methods, they still achieved what they wanted. Before they could insulate it, they needed to invest in wooden beams to provide much-needed support for the seating, bed, and cabinets.

Aron and Laura underestimated how tedious insulating their van would be, and how much time it would take. 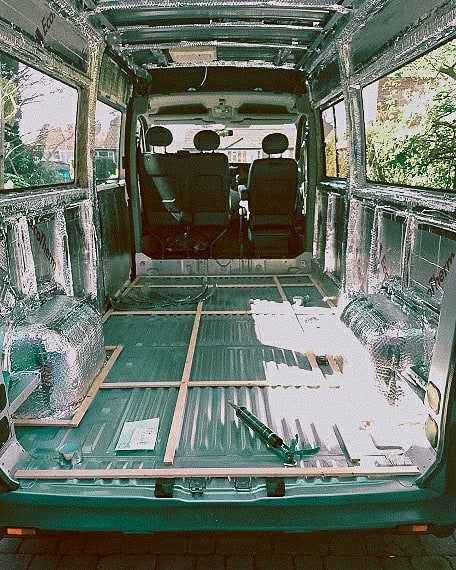 They did a lot of research to find out what kind of insulation types were available. As it turns out, they would need quite a few of them! They used Kingspan insulation for large gaps, sheep’s wool for small gaps, and Reflectix shiny bubble wrap with aluminium tape to get into the areas their primary insulation couldn’t.

Once their insulation was in place, they used Pinkgrip to secure their beams in place, which would then act as the frame for their plywood flooring. They also put their beams in strategic locations for strength based on where their bed frame and cabinets would be.

Figuring out where to put the cabinets, and how deep their seating would be, was complicated. So, they decided to build a floor plan to scale with blankets and cushions at home. It wasn’t the most typical method, but it did show them how much free space they would have. 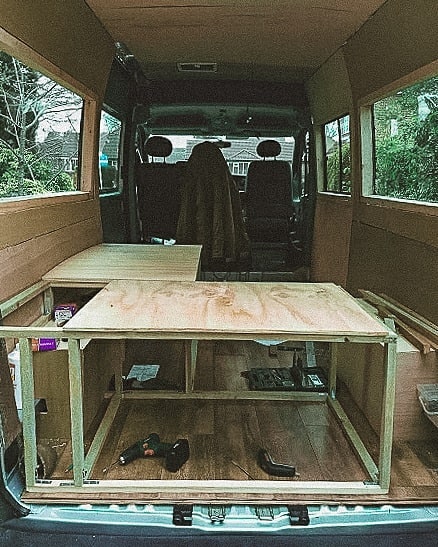 If Aron and Laura thought insulating the van took a long time, then they were in for a surprise when the time came to add their ply. This process took far longer, but the result was better than they could have hoped.

They added more support beams that they attached to the van’s body. These would allow them to secure the 6mm plywood in place. They used the original fabrics from the van’s ceiling as templates, so they advise others not to be in a hurry to throw away these materials. They come in handy!

Even though some ply didn’t fit in place correctly, any rough edges were covered up by their cladding and decorations. Once all the wood was in place, they picked up rustic oak effect laminate flooring for £20 secondhand, and had some leftover for their cabinet, as well.

Aron and Laura placed the ply on an underlay on top of their plywood floor. Given that it was only 1.8 centimetres thick, Aron was still able to stand in the van without hitting his head.

For the windows, they used thick beams screwed into the van’s metal frame to square off the natural curvature. They then moved on to cutting and angling the wood for the bed frame. This process had to be perfect, as they had to make sure the base and cladding fit easily. 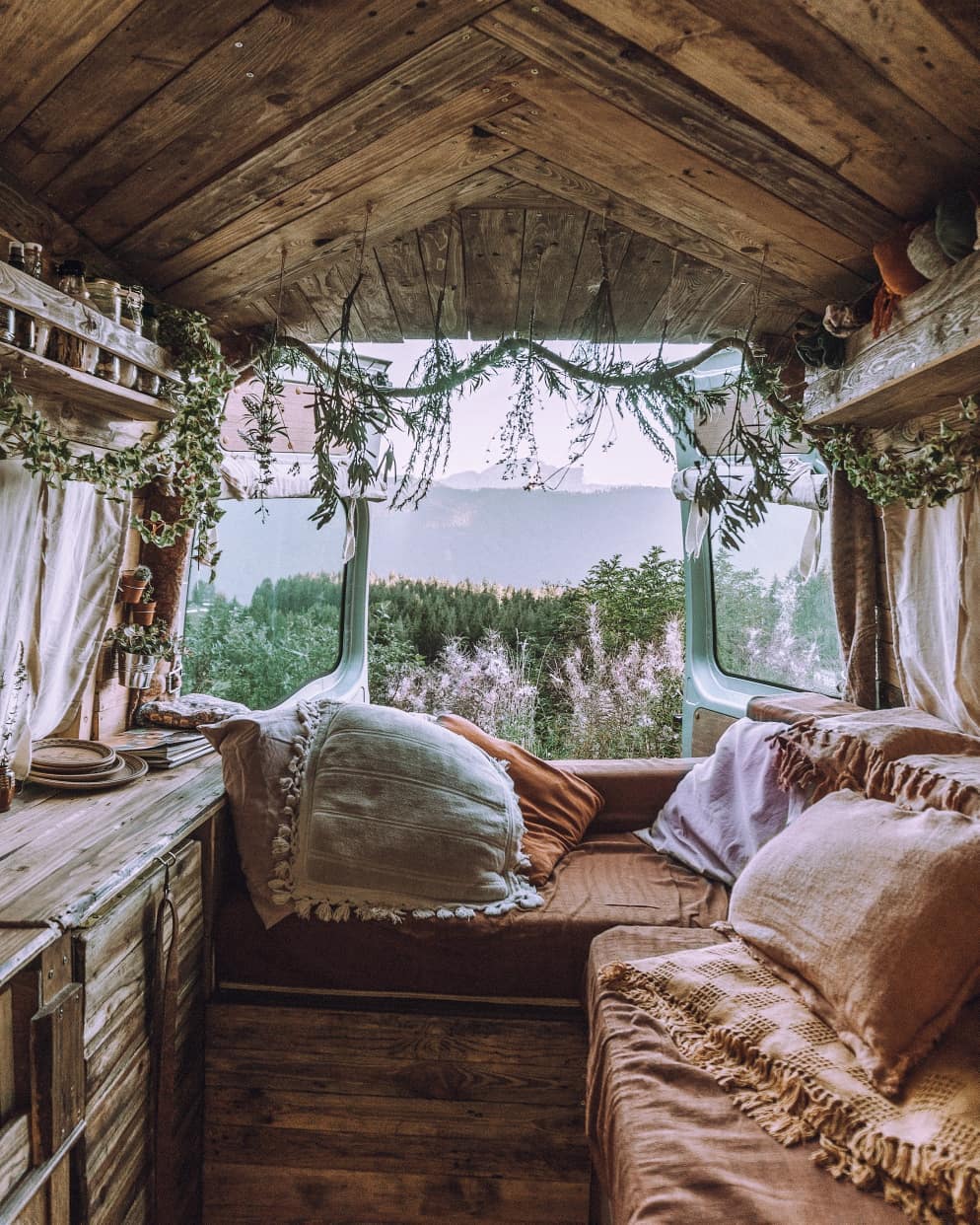 To carry on the rustic appeal, Laura and Aron opted to use pallet wood for their van’s ceiling. They broke down the pallets, sanded the wood, and screwed it into place. While the wood does add a lot of weight to their roof, Aron said it doesn’t alter how it drives. What’s more, they were able to secure all the wood for free from local building supplier skips.

When the time came to purchase the mattress for the bed frame, Aron and Laura thought long and hard about how to make it work. They bought a 15cm thick memory foam mattress on Facebook for £15.

They then cut it so that they would have the perfect sized cushions for their sofa backrests, but then form part of the bed mattress at night. Laura managed to find an open weave cotton fabric for £1 per metre from a market and zips and threads at three for £1 from a charity shop. 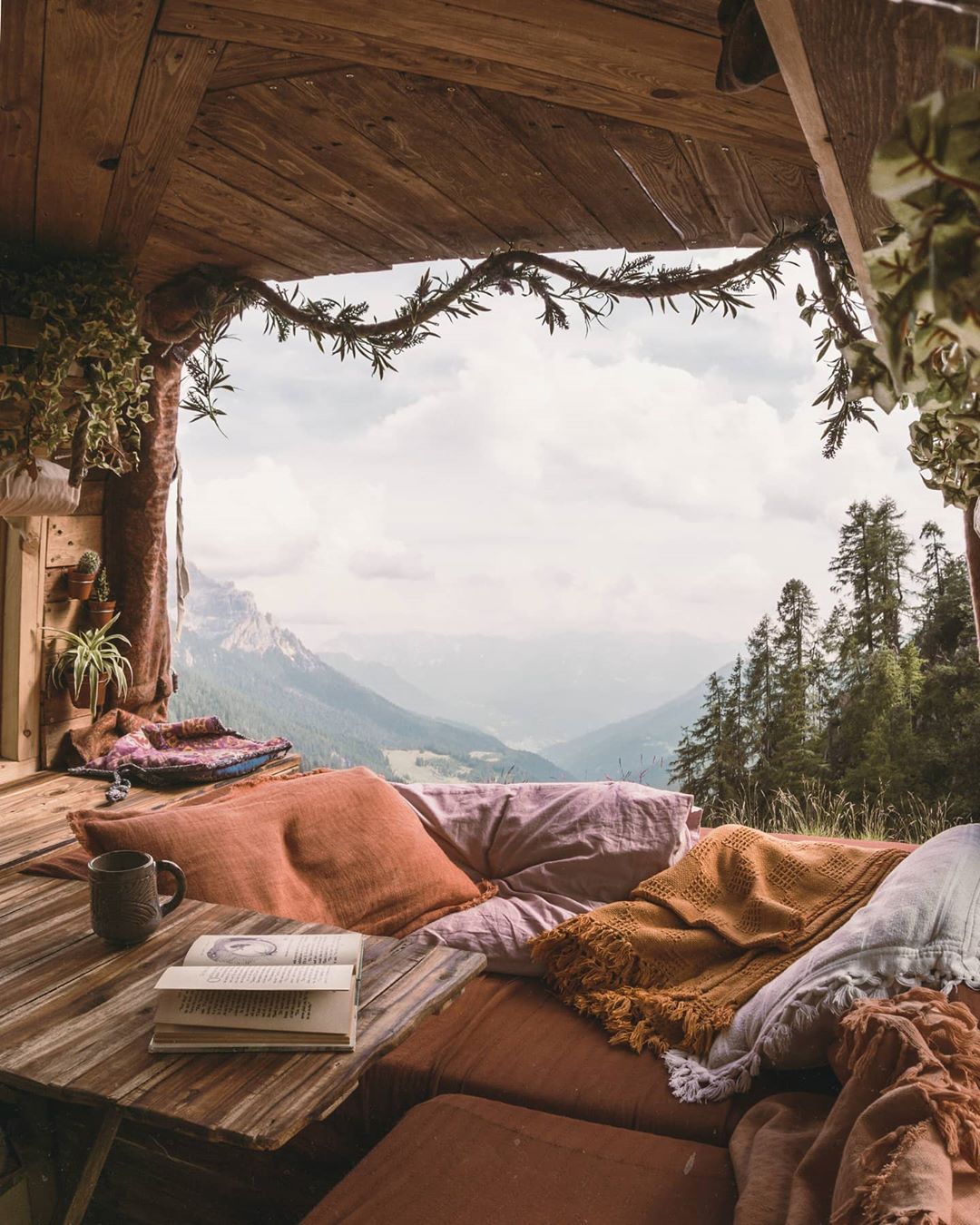 Nearly everything in Laura and Aron’s converted cabin on wheels has been found or scavenged – right down to their spoons and bowls.

Even the glass jars on their shelves were purchased thoughtfully.

Putting as much time and effort into thoughtful shopping as Aron and Laura did can add a lot of time to the conversion project. However, it does mean that every part of the van has a story to tell. 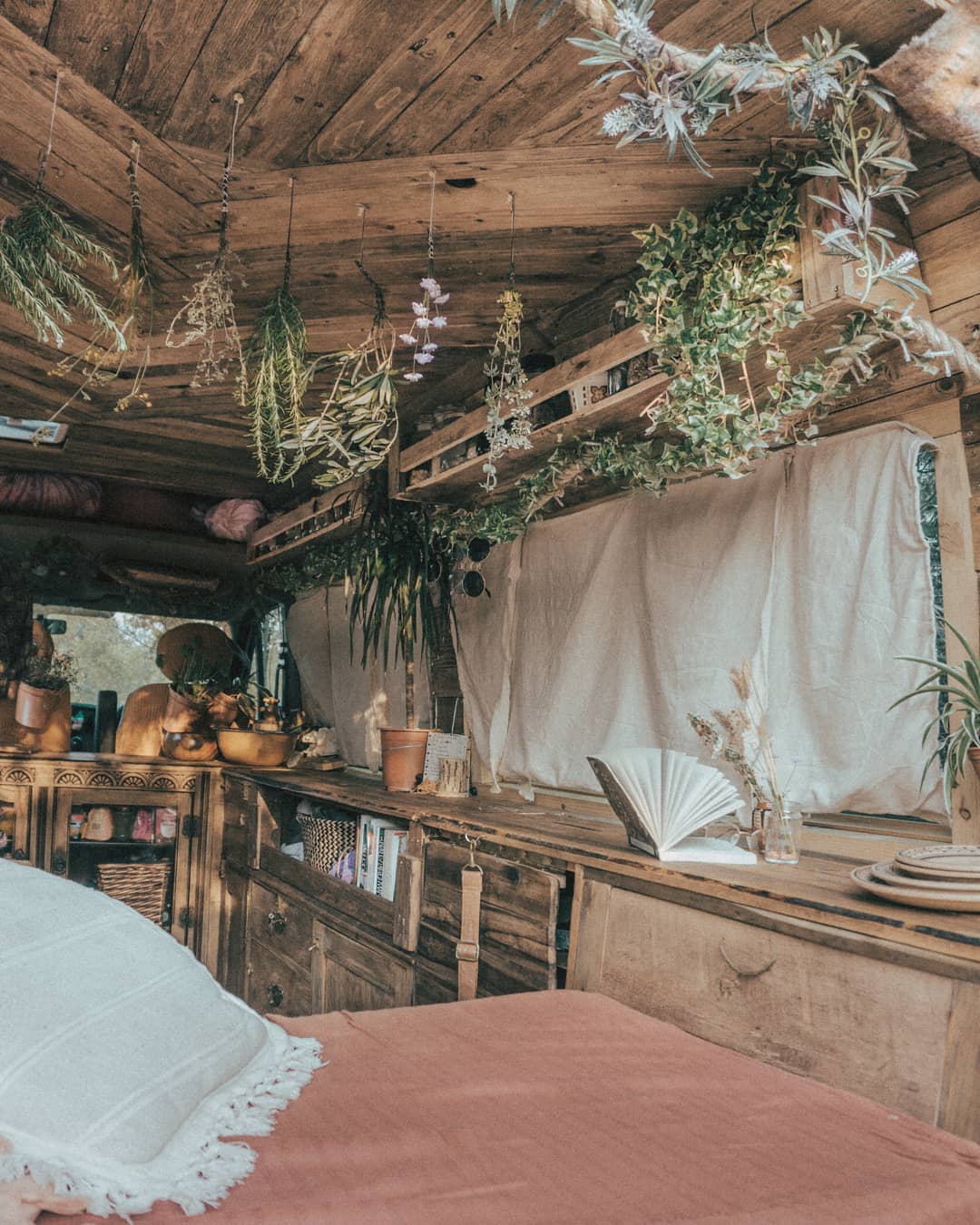 While it would have saved much time to purchase a long plank of finished wood for their worktops, it was out of their budget. So, they used long slats of wood they found in skips and turned them into a set of three rustic worktops.

They took care to sand and chop the wood so that it would all slot into place, then joined them with screws. Once they were sanded, they applied a worktop oil they secured secondhand for £2 and stained it, so it was anti-bacterial, stain-proof, and water-resistant. 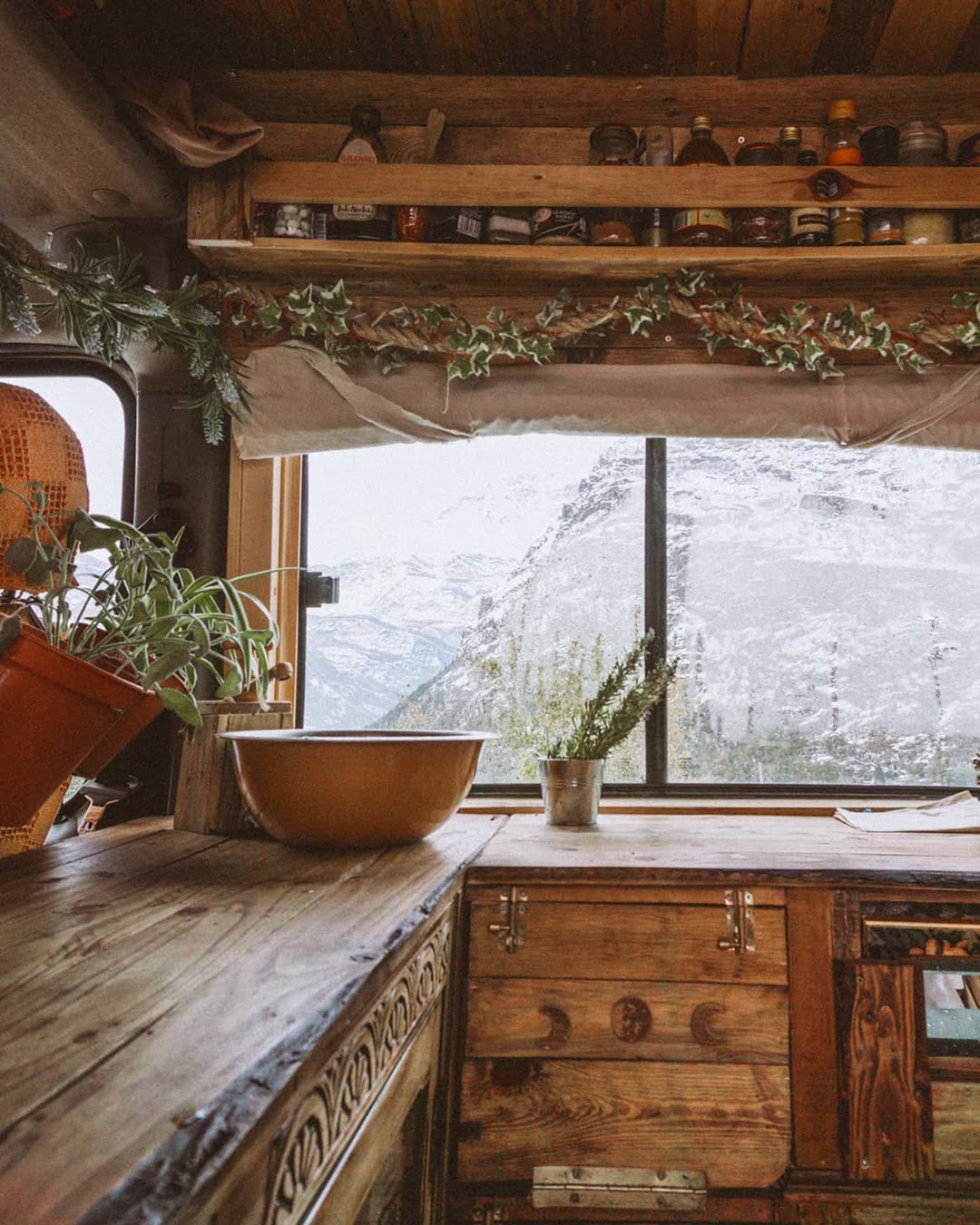 Having running water is a must, so Aron and Laura invested in a 20L tank. They installed it in the cabinet under the sink, and water flows out with a foot pump. 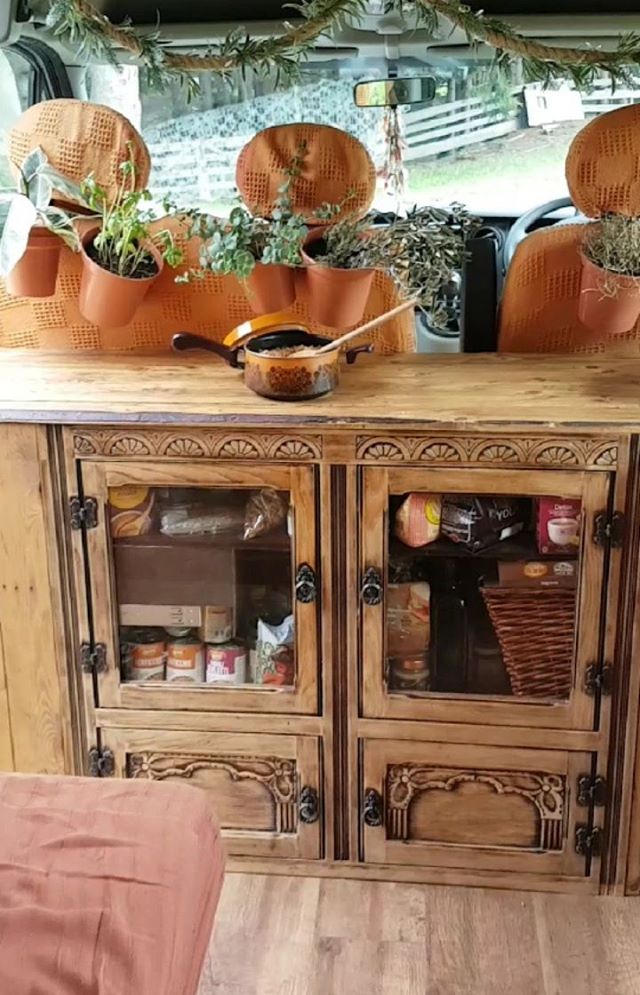 Aron and Laura built most parts of the van’s conversion themselves, but their cabinetry was a different story. It would have taken more money to make it than purchase it, and they didn’t have the skillset to fit drawers and doors.

So, they purchased two cabinets secondhand for food and general storage and chopped them down to size. They were then able to build additional storage off them. 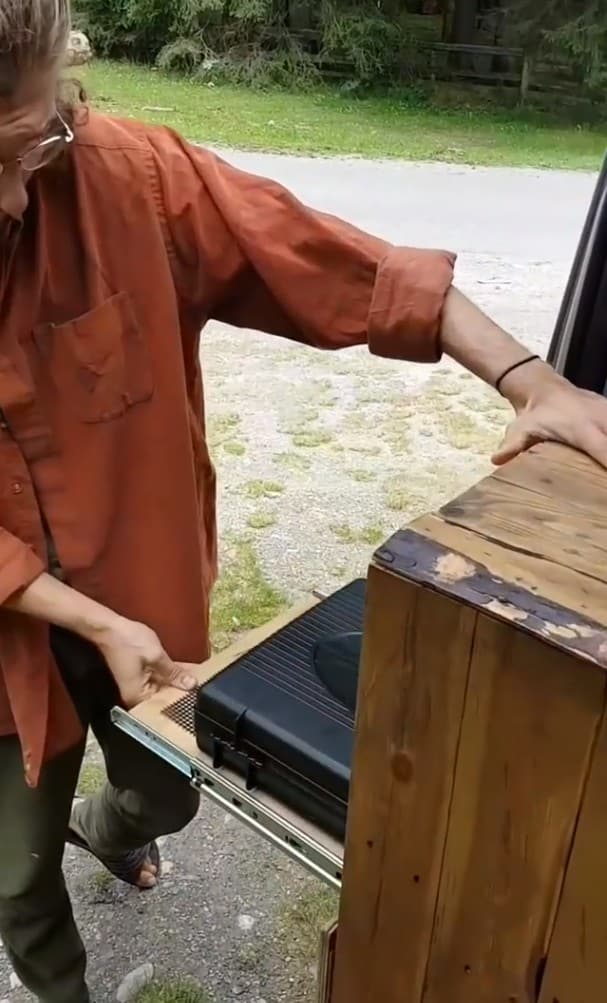 While on the road, Aron and Laura can pull over, haul out their portable gas stove, and cook up a storm. By cooking out the rear of the van, they limit food smells within it. 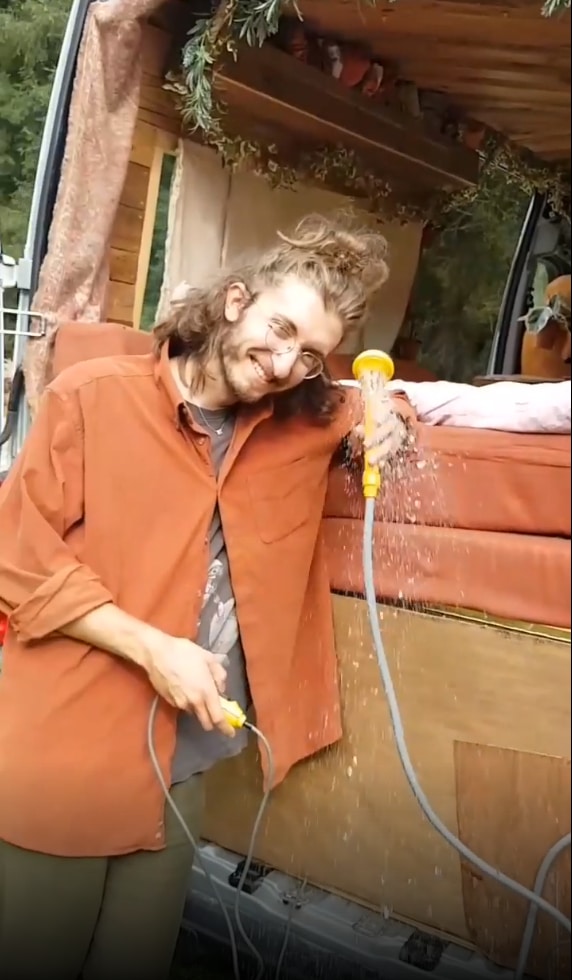 Even their hygiene needs are taken care of, with an electric shower and ten-litre water tank in the rear of the van.