Katherine lives happily in a converted school bus with her husband, an 8-month-old baby, a dog and a cat

Back in 2009, Katherine and her husband Steve were paying a high rent to live in a popular outdoor recreation area while working with a wilderness youth program. They daydreamed about owning a yurt but could not afford property at the time, so when they saw a converted school bus for sale on Craigslist for about US$7000, they jumped at the opportunity. Some friends living in Washington Cascades, allowed them to park the bus on their property, so after installing a composting toilet they moved in with their West Highland terrier, Ike. 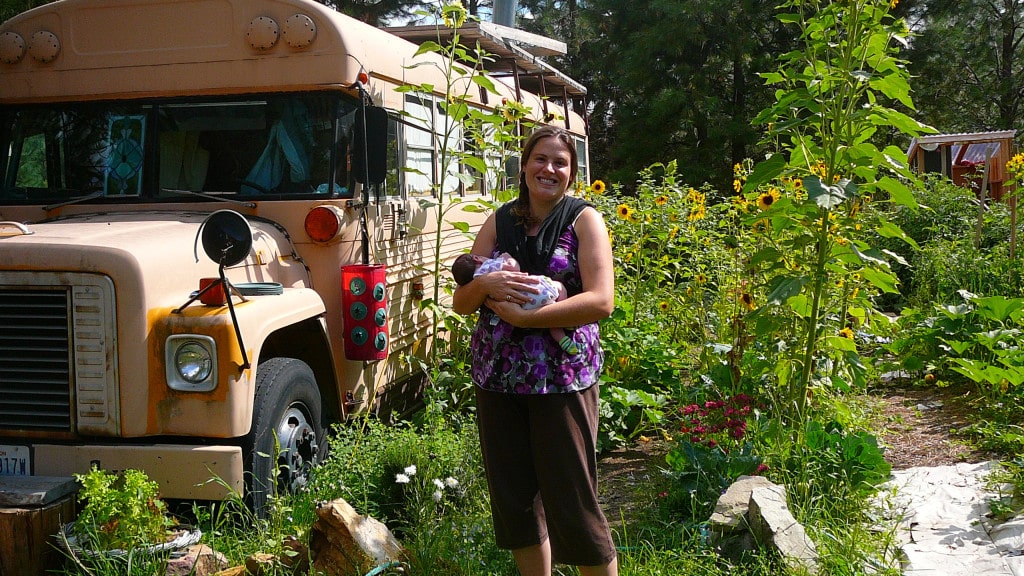 The young couple lived in the bus for 2 years, and then Katherine took a job at a retreat center that offered them a small house as part of her compensation. However, they kept the bus, and in September 2013 they moved back in, this time with a newly acquired cat, Mish. Today the household has grown even larger, as a baby girl chose to join the couple. One might think that two adults, an 8-month-old baby, a dog and a cat living together in a school bus might be something of a challenge, but not according to Katherine:

“Everyday life in the bus isn’t much different from life anywhere else. In the morning I always put up our futon, which immediately helps the bus feel bigger and tidier. Clutter builds up really fast. Sometimes I just have to get out to avoid compulsively straightening up. I spend more time in the bus than I did before we had our little girl. For a bit of the day, she crawls around and plays with toys while I do dishes or work at the computer. It’s actually really nice because we just had to put up one gate across the front of the bus and install a latch on the bathroom door and we can set her loose. I get her outside for a walk or to play in the grass every day. In the winter, I took her cross-country skiing in a front carrier.” 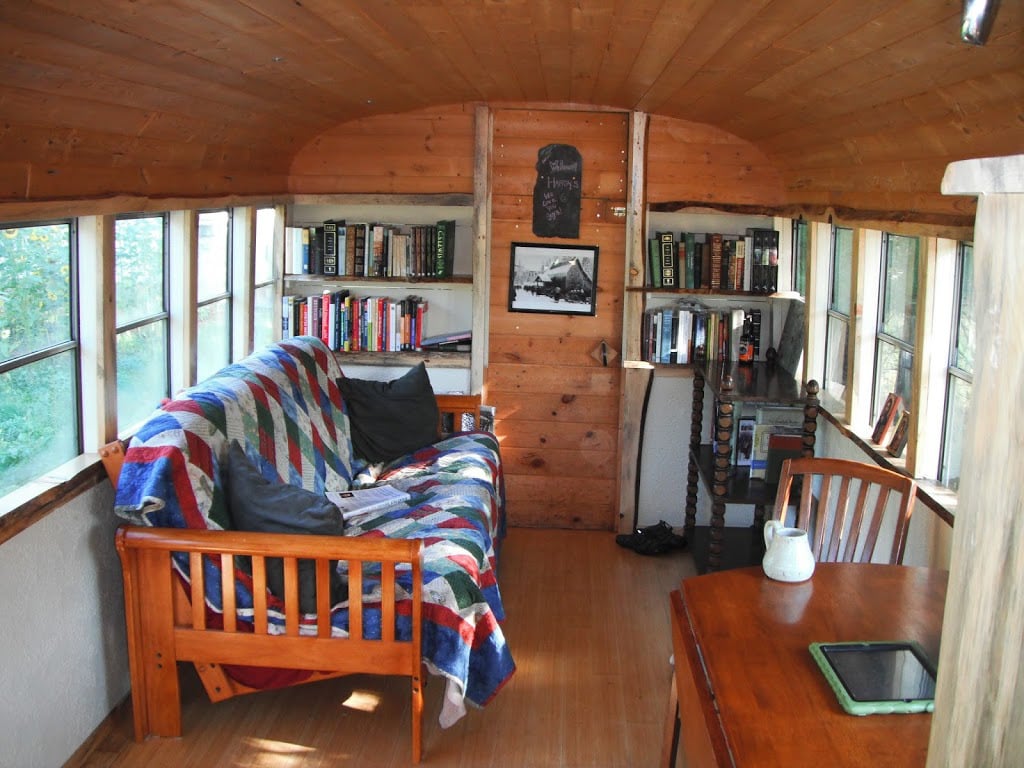 Are there any challenges living with an 8-month-old baby in a converted school bus?

“I knew I wanted to cloth diaper, but with a composting toilet we can’t have a diaper sprayer. This has led me to practice elimination communication with her. Basically, I watch her natural timing and signals and take her to the potty. Amazingly, she is happy to go in it. I also use liners in the cloth diapers for any poop “misses”. We use our neighbor’s washer, so it works out. Also, we have to fit a third person’s belongings in the bus, which makes things tighter.” 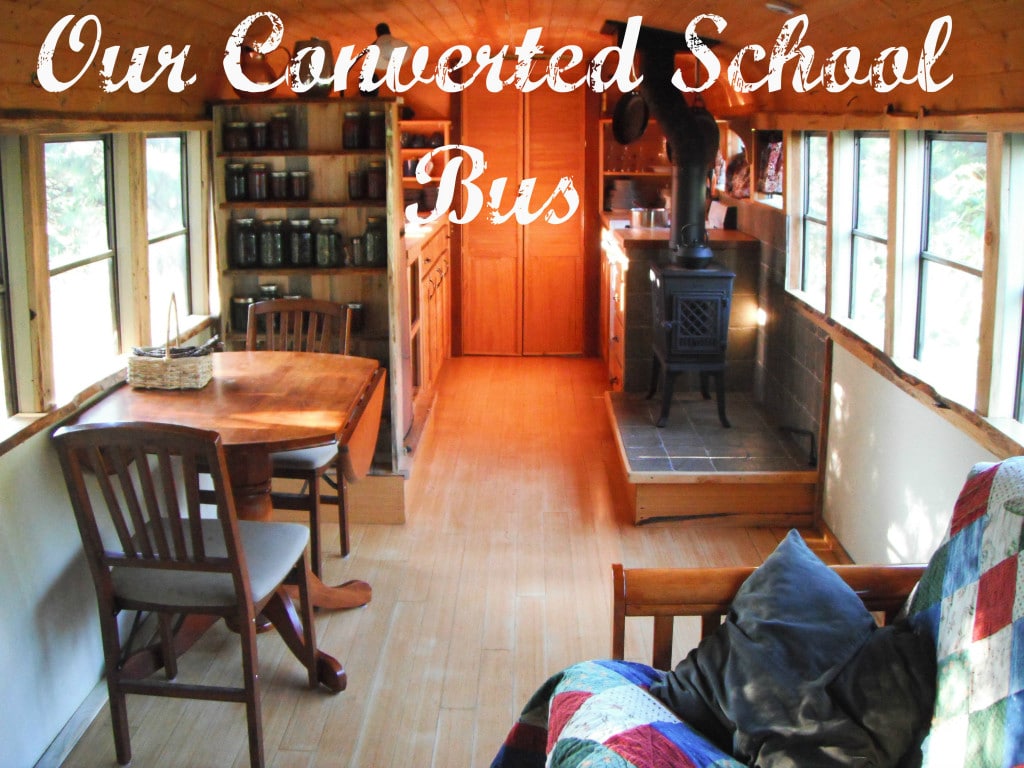 Over the years, the couple has made some improvements on the bus.

“We’ve added the composting toilet, an efficient wood stove, a refrigerator, a 5-gallon hot water heater, a shower, a built-in table and bench and live edge trim and shelving. We have spent $4000 or so on this. The composting toilet and stove were expensive.” 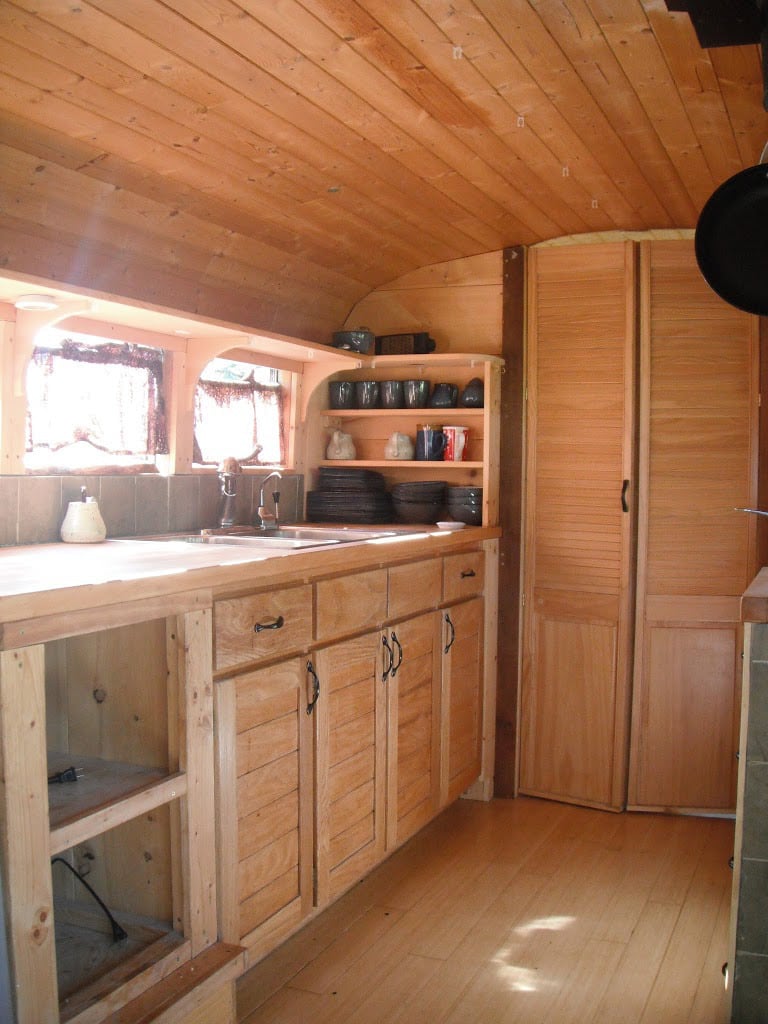 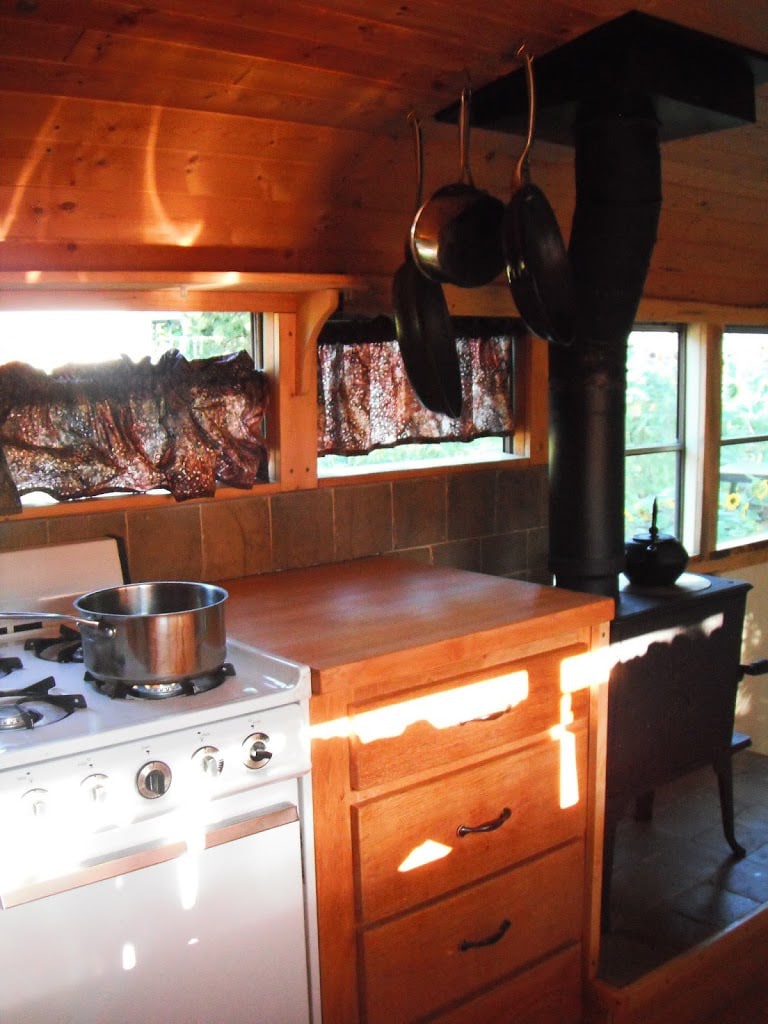 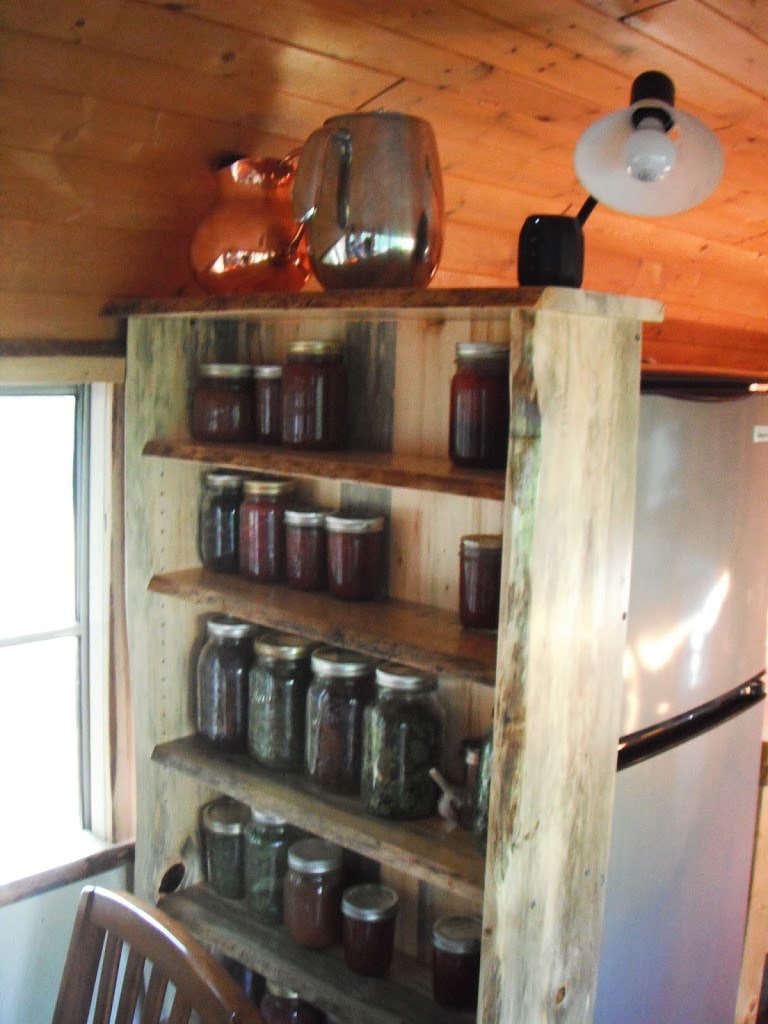 Katherine’s husband Steve built this beautiful set of shelves so the family would have more room to store the food that Katherine is drying in their solar dehydrator and on the roof of the bus. 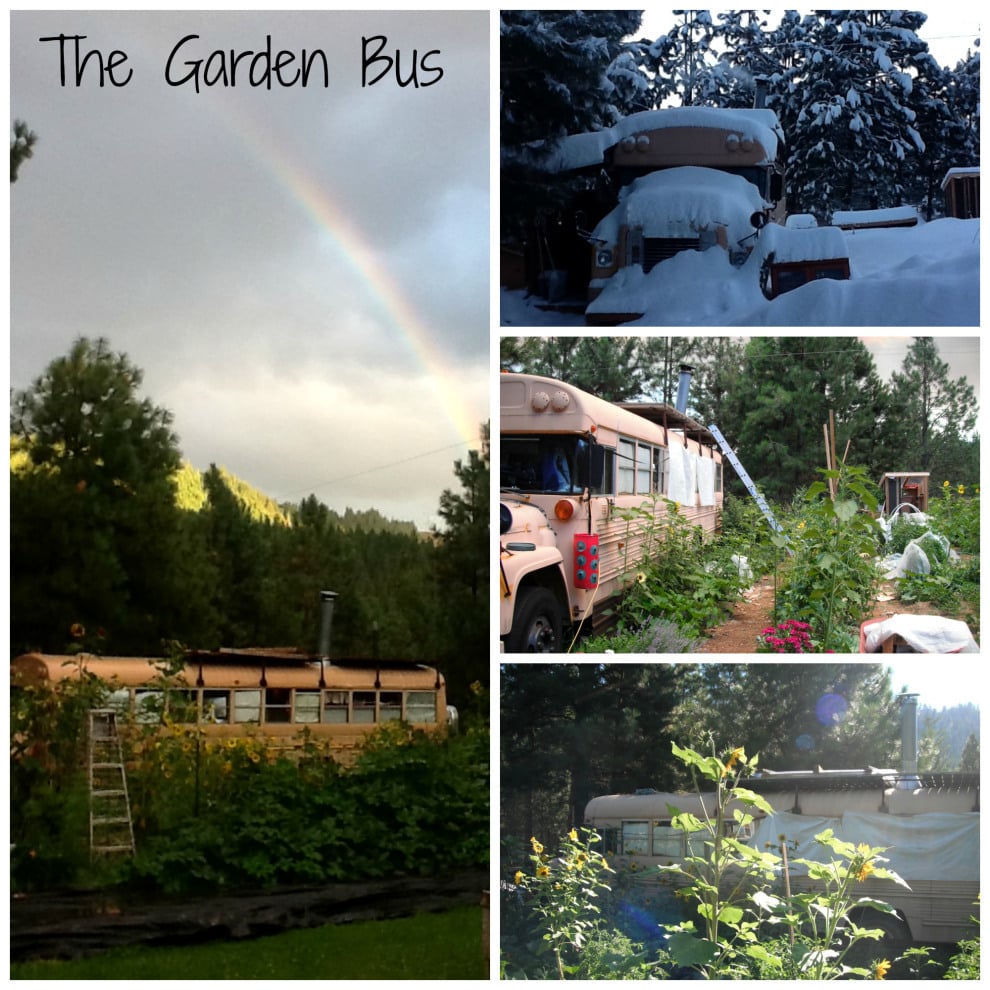 The bus is a 1978 International, 30 feet long. The family’s hosts love to garden and let them dig in right next to the bus. Katherine grow peas, lettuce, kale and other hearty greens, strawberries, raspberries, rhubarb, beans, carrots, squash, tomatoes and sunflowers.

Mish, the cat and Ike, the dog, get along, although they are in a constant rivalry for the coziest sleeping nooks.

What’s the best part of living in a bus?

“Four years of freedom from rent. We are now building a small house on our own land. It’s great to have a place to live while we build.”

And the worst part?

What’s your advice to anyone who’s considering moving into a bus?

“Get a composting toilet with a urine separator and treat anyone who lets you park on their property really, really well.”

For more stories about living in a school bus, visit Katherine’s blog: www.catchingeddies.com.

For more inspiration from Living in a shoebox join me on Facebook: