Photographer Rory Savatgy loved to travel, and he had grand plans of one day owning his own mobile home to live out his dream of traveling wherever he wanted to go.

Initially, he thought about purchasing a box truck and transforming the cargo space into a comfortable house on wheels, but he struggled to find anything that ticked all the right boxes. Eventually, he settled on a Mitsubishi Fuso flatbed truck and built a camper pod to sit on the back.

That was Rory’s very first project, and it wasn’t smooth sailing. Rory said the first winter was particularly cold, and he didn’t believe his tiny home was equipped for the elements. Eventually, he purchased a 2009 Isuzu NPR, moved the box onto the new truck, and improved it to the point where it would eventually become a full-time adventure truck for year-round travels. 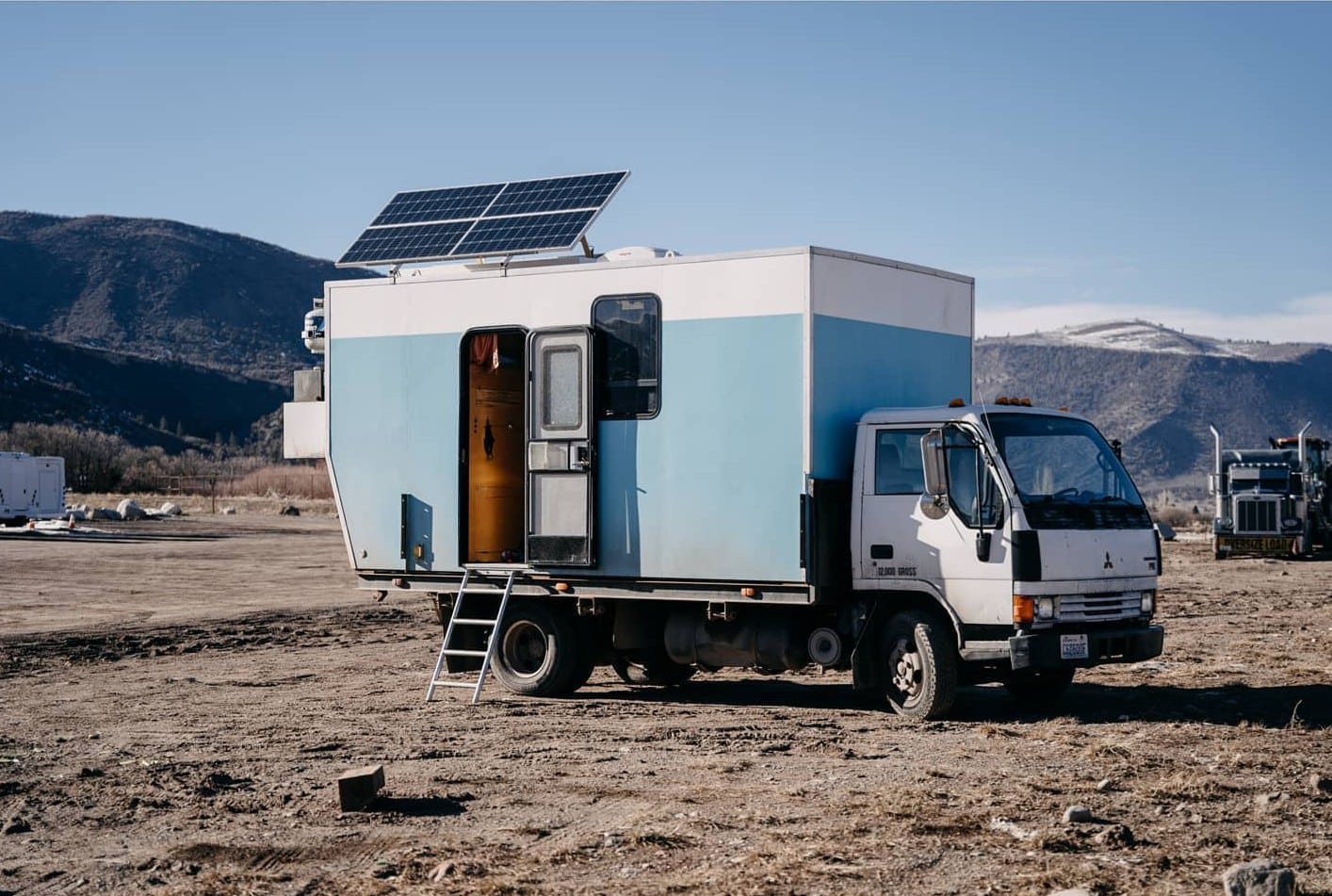 Photographer Rory Savatgy purchased a Mitsubishi Fuso flatbed truck and built a camper pod to sit on the back. He then upgraded to a 2009 Isuzu NPR and fine-tuned his house on wheels until it was a beautiful and practical 14-foot mobile home with an ingenious layout, stunning design elements, and storage hacks galore. 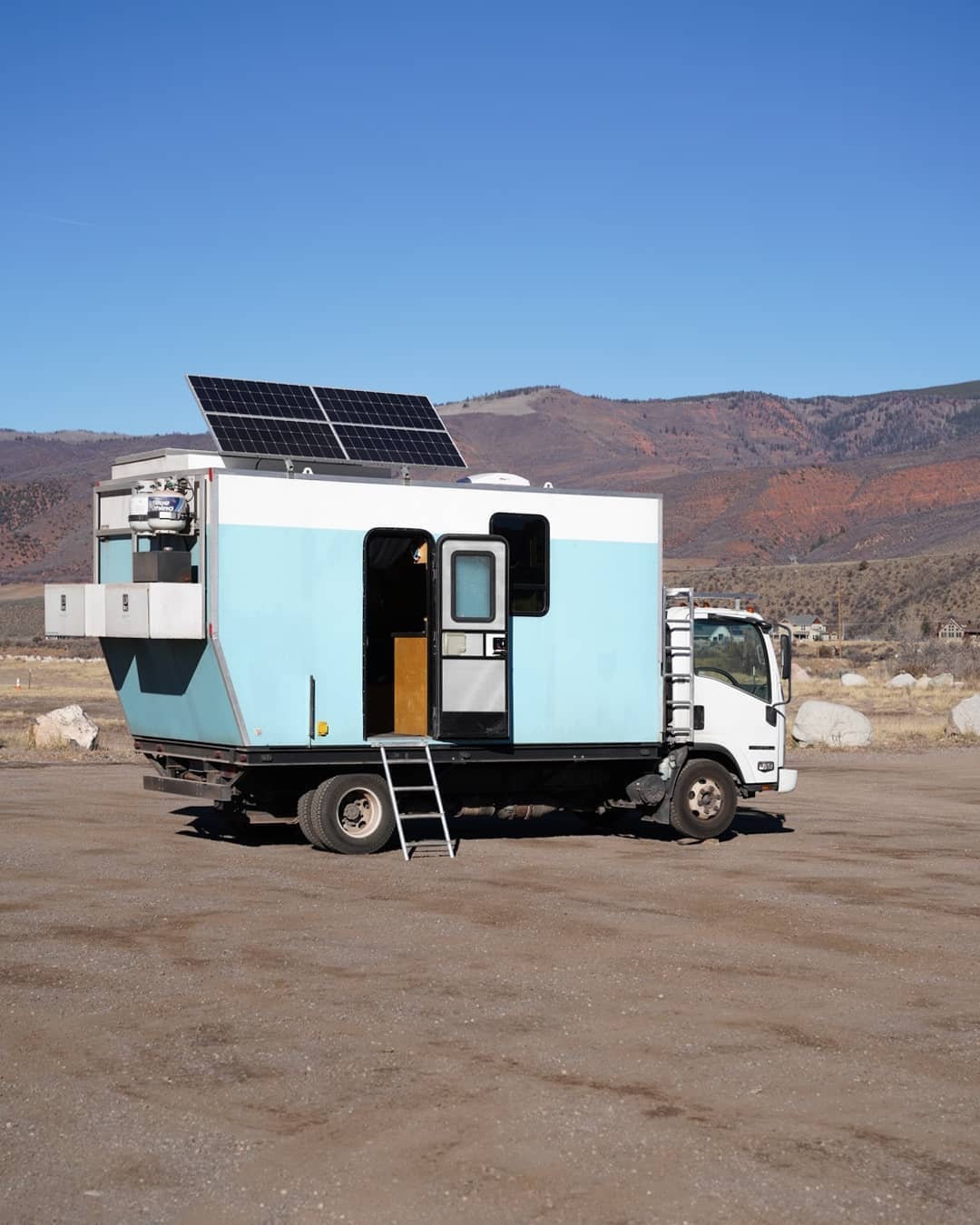 Rory’s home is built for year-round adventuring. It boasts a 400-watt solar panel array on the roof with 60-degree movement, a ladder on the cab to access the top, and a rack system for extra storage. There are also two large storage boxes at the rear. This blue and white beast takes Rory wherever he wants to go. 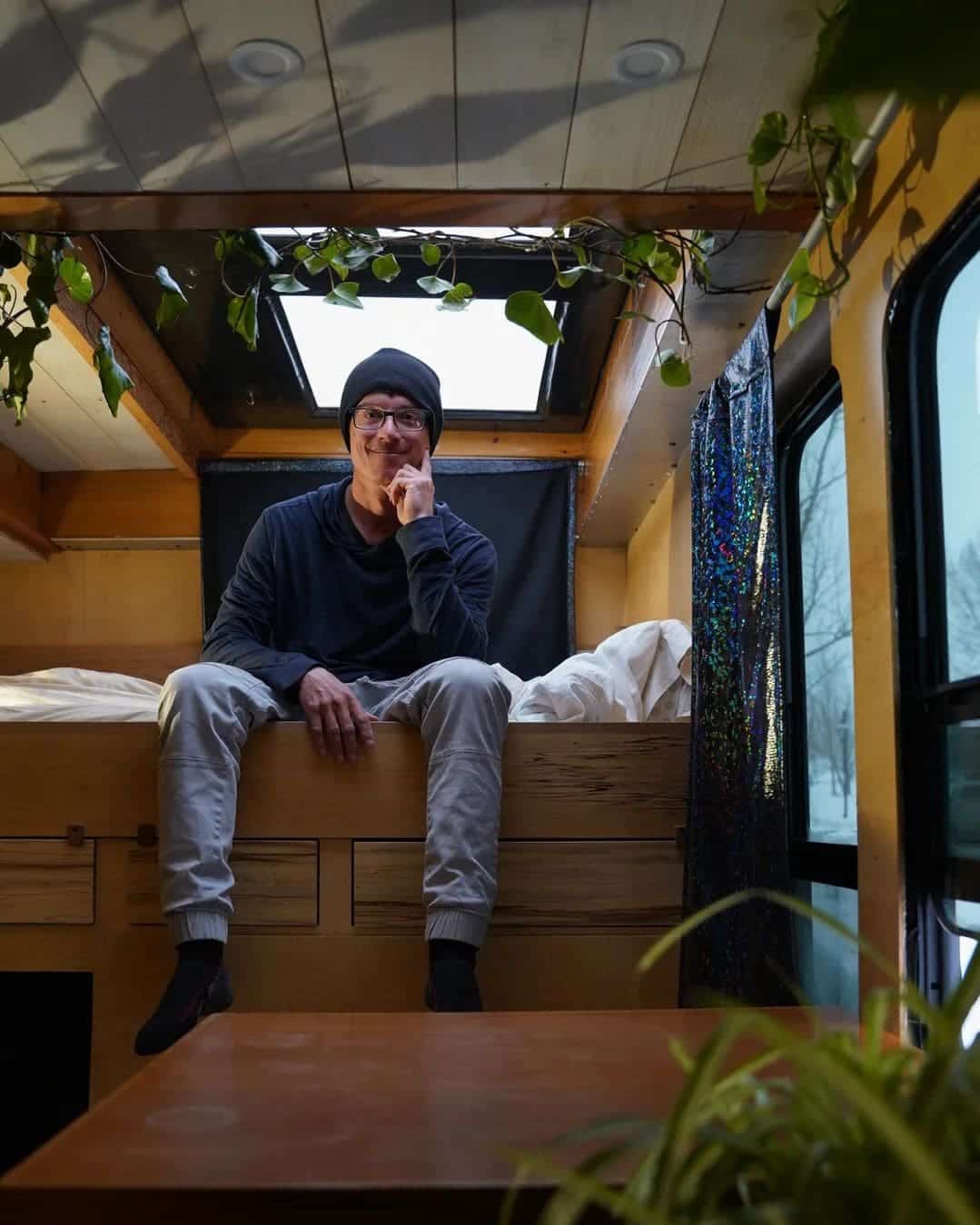 Every design element in Rory’s truck has been well thought out, right down to the natural materials and storage for everyday essentials. 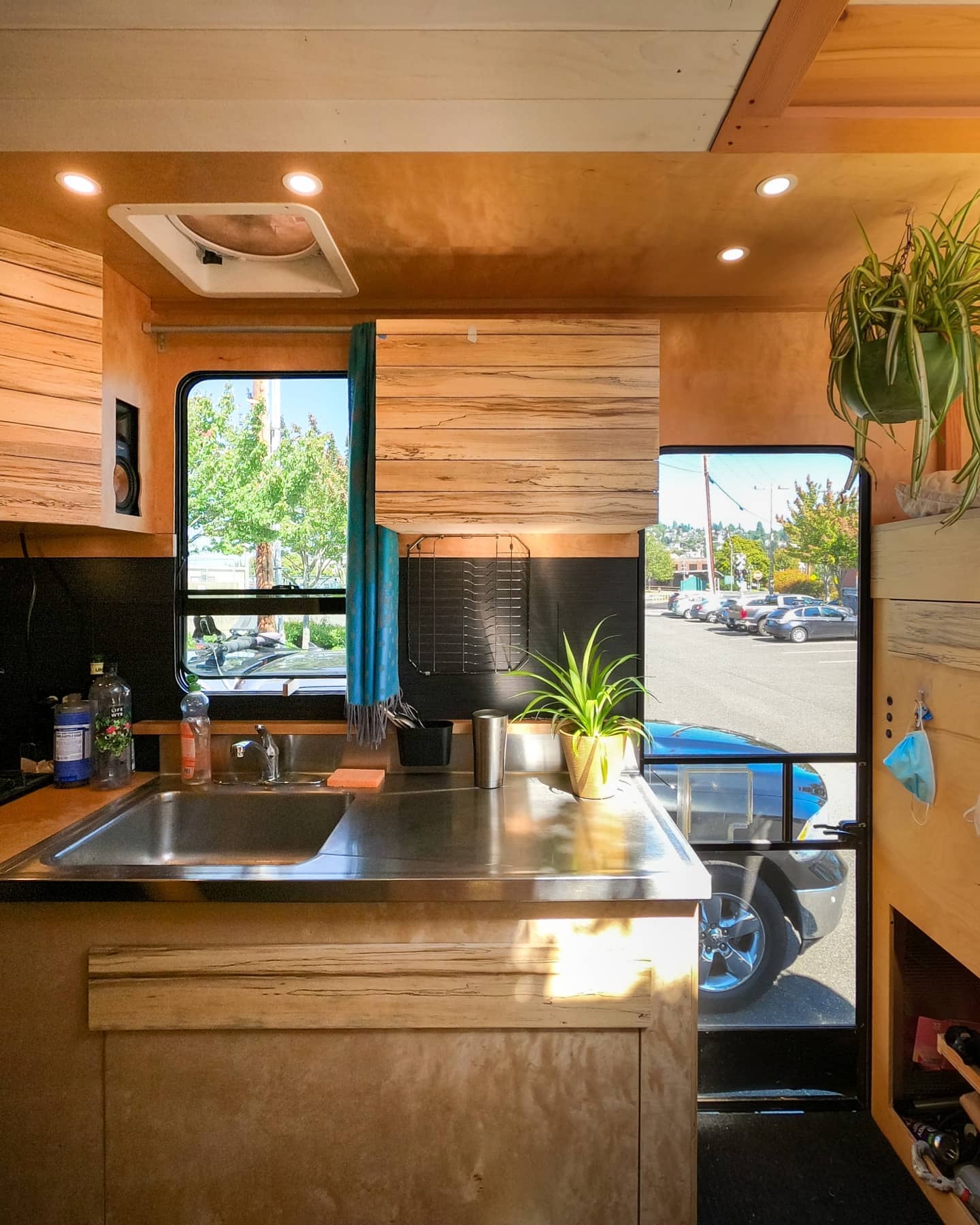 Rory loves to cook, so having a large kitchen in his house on wheels was important. It boasts a large sink, generous stainless-steel counter, and an abundance of kitchen cabinetry. His kitchen cabinets even have a built-in speaker so he can listen to music, audiobooks, and podcasts while he cooks up a storm. 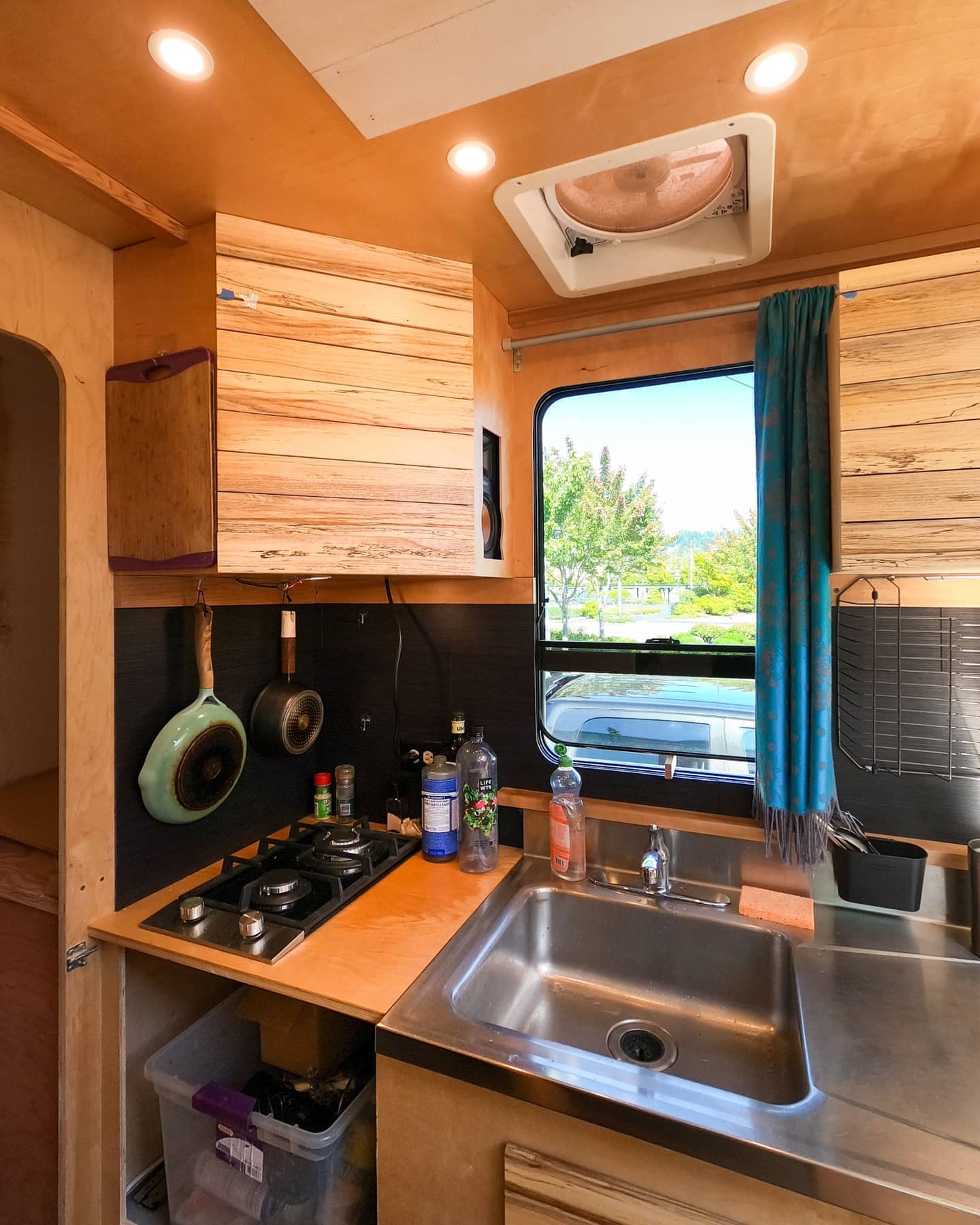 The kitchen is undoubtedly the heart of the home, with a two-burner propane cooktop, a custom slide-out induction cooktop, 42-gallon freshwater and greywater tanks, and plenty of natural light from the well-positioned window. There is even a Max Air vent to remove cooking odors.

The door on the left leads to a compact bathroom that houses a shower and a compostable toilet. 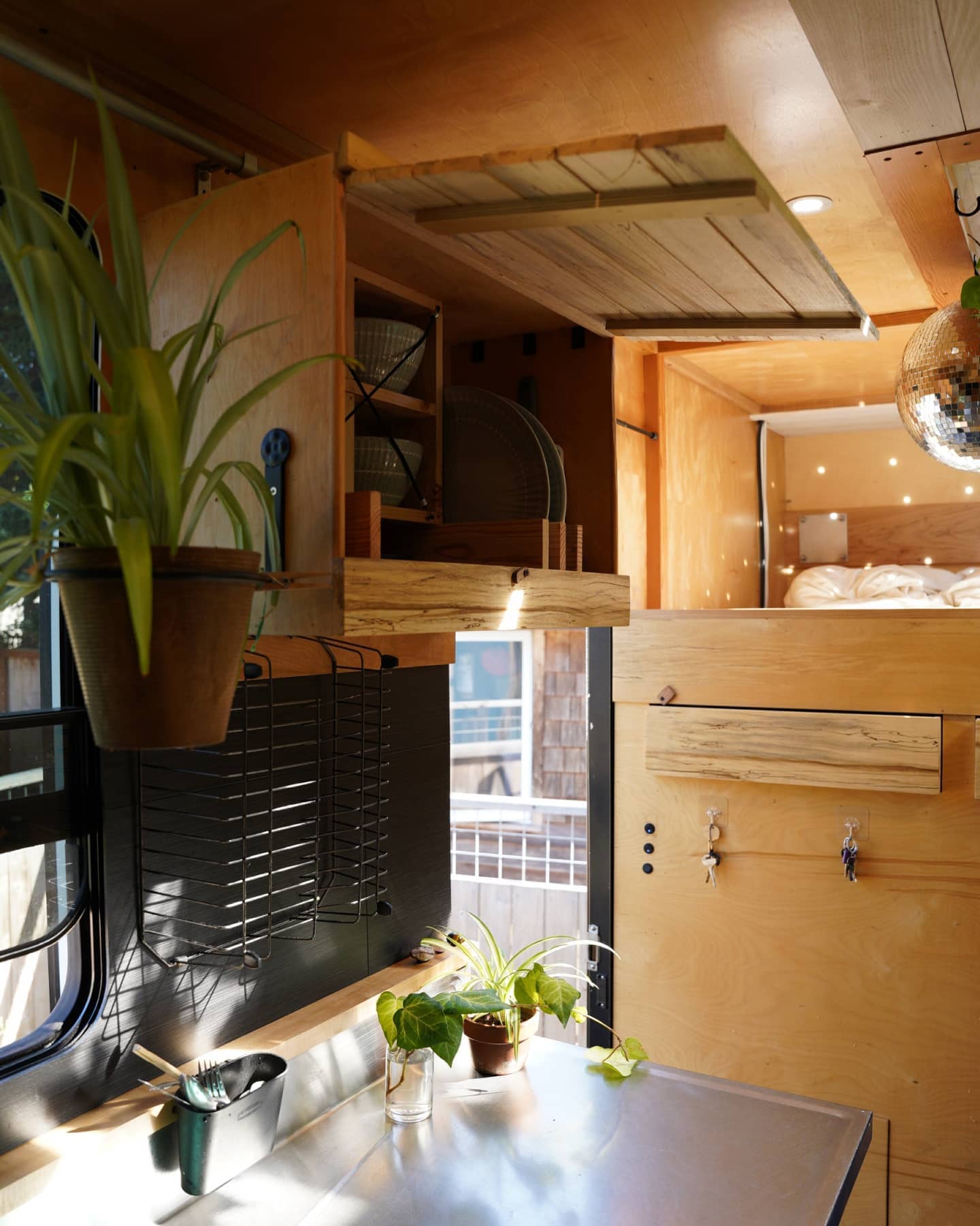 No kitchen is complete without a pantry and fridge, and Rory’s kitchen has both and so much more. He has an electric 120-volt mini fridge, a pantry, a wall-hung dish rack, and an abundance of drawers and cabinets for storage. 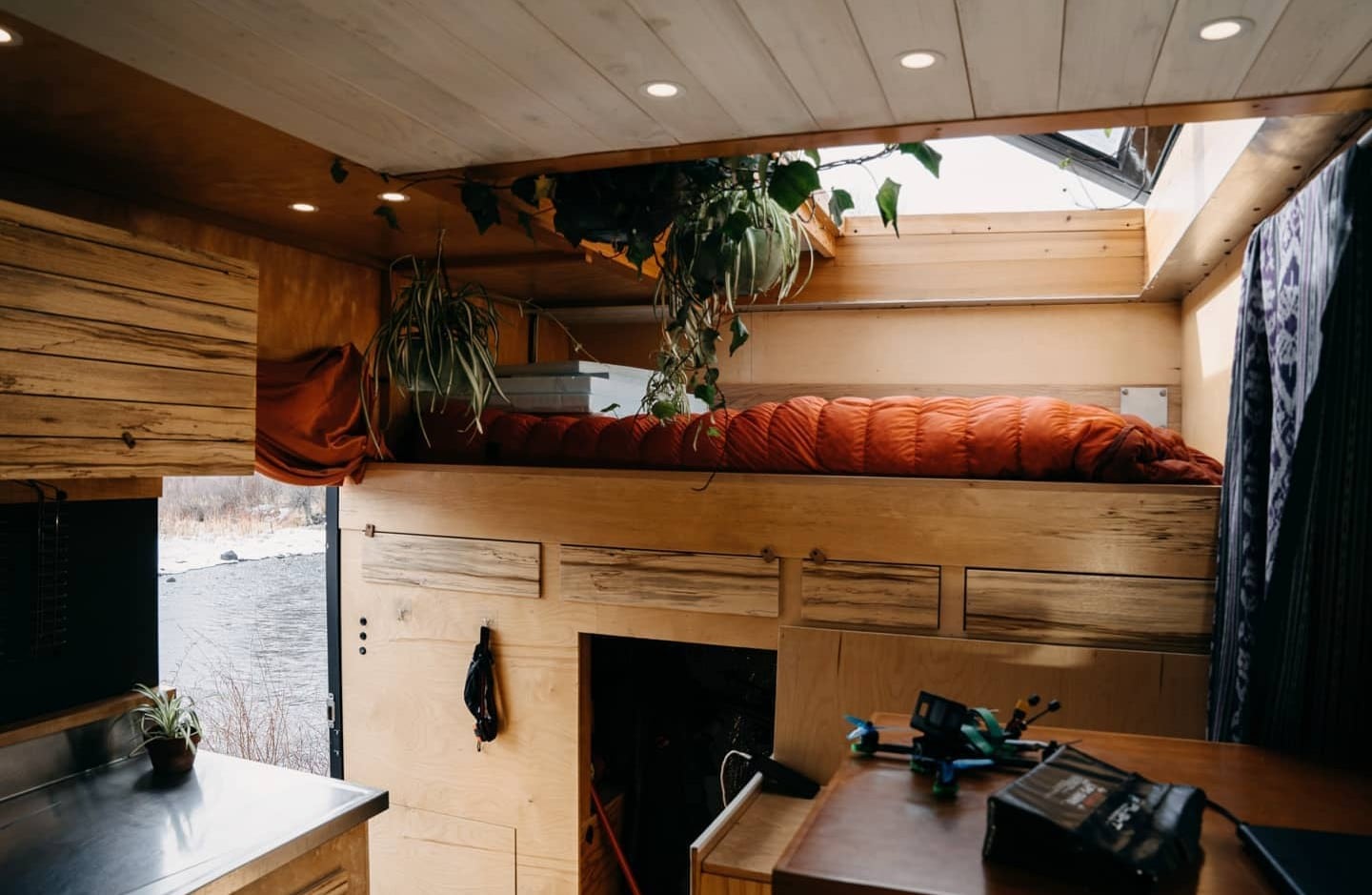 Rory’s bedroom is tucked away in the rear of the bus, elevated out of the way. It enjoys plenty of natural light, which works well with the natural wood featured throughout the camper pod. There is also an entranceway under the bed leading to Rory’s onboard garage. This little room contains a bike, roller skates, and all his tools, which he can also access from outside the truck. 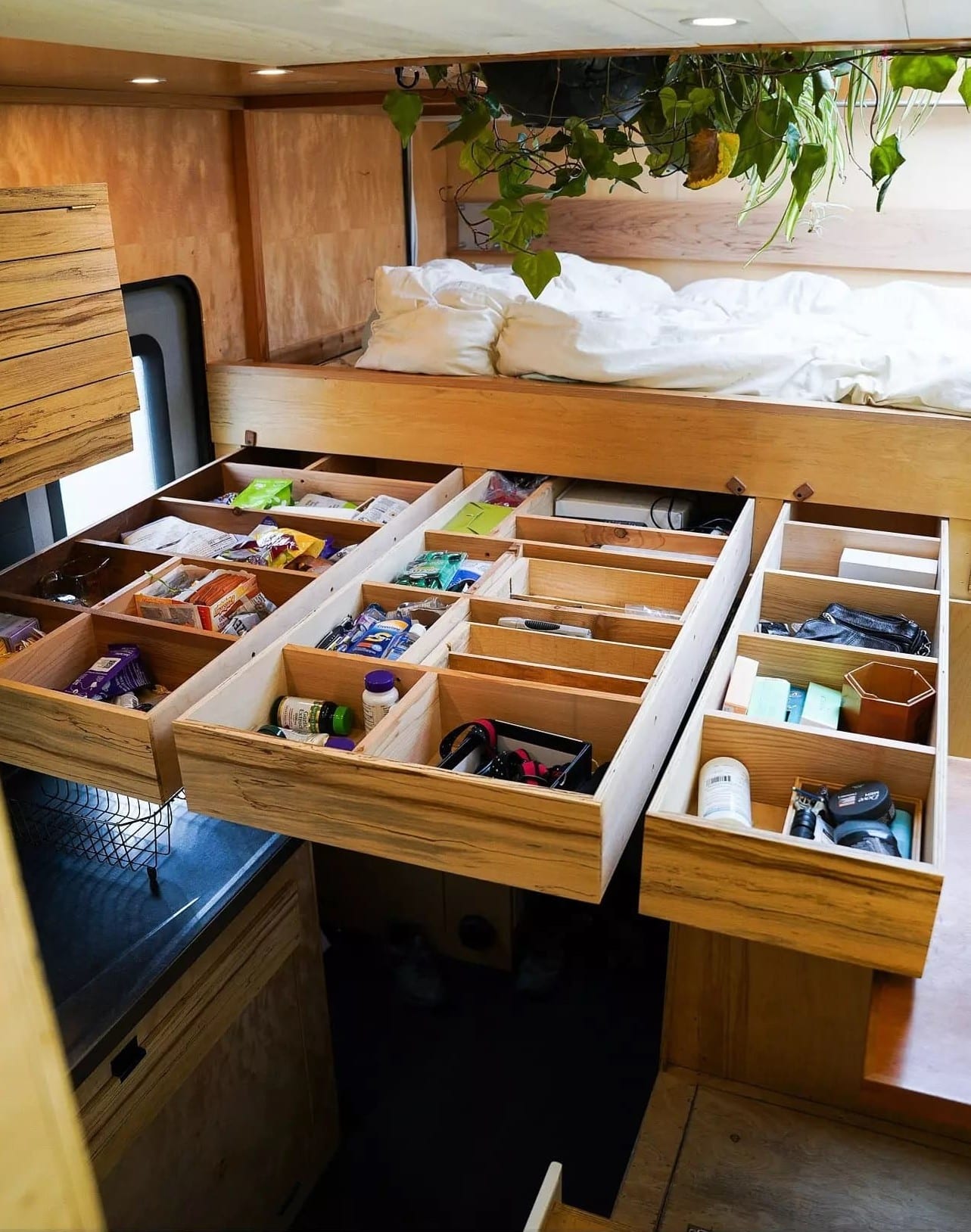 Storage is essential in any tiny home, and Rory’s camper pod on wheels is no different. His bed has several 4.5-foot-long built-in drawers on hinges, with compartments for all his worldly possessions. 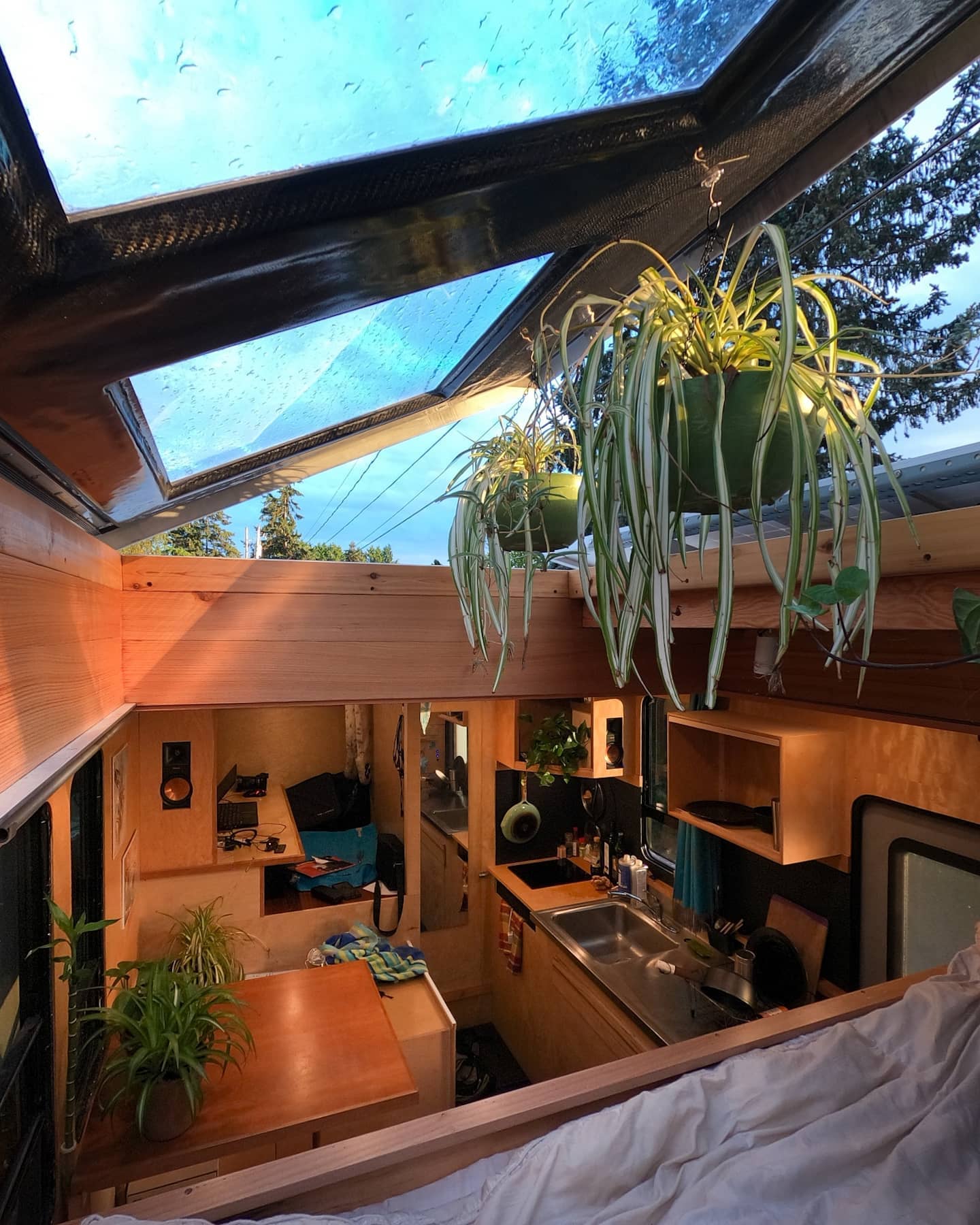 The bedroom nook is perhaps one of the most standout areas of Rory’s camper pod. It has an extra-long queen-sized bed and a large opening skylight for him to see the stars at night. He can also use this to access the roof for solar panel adjustments. 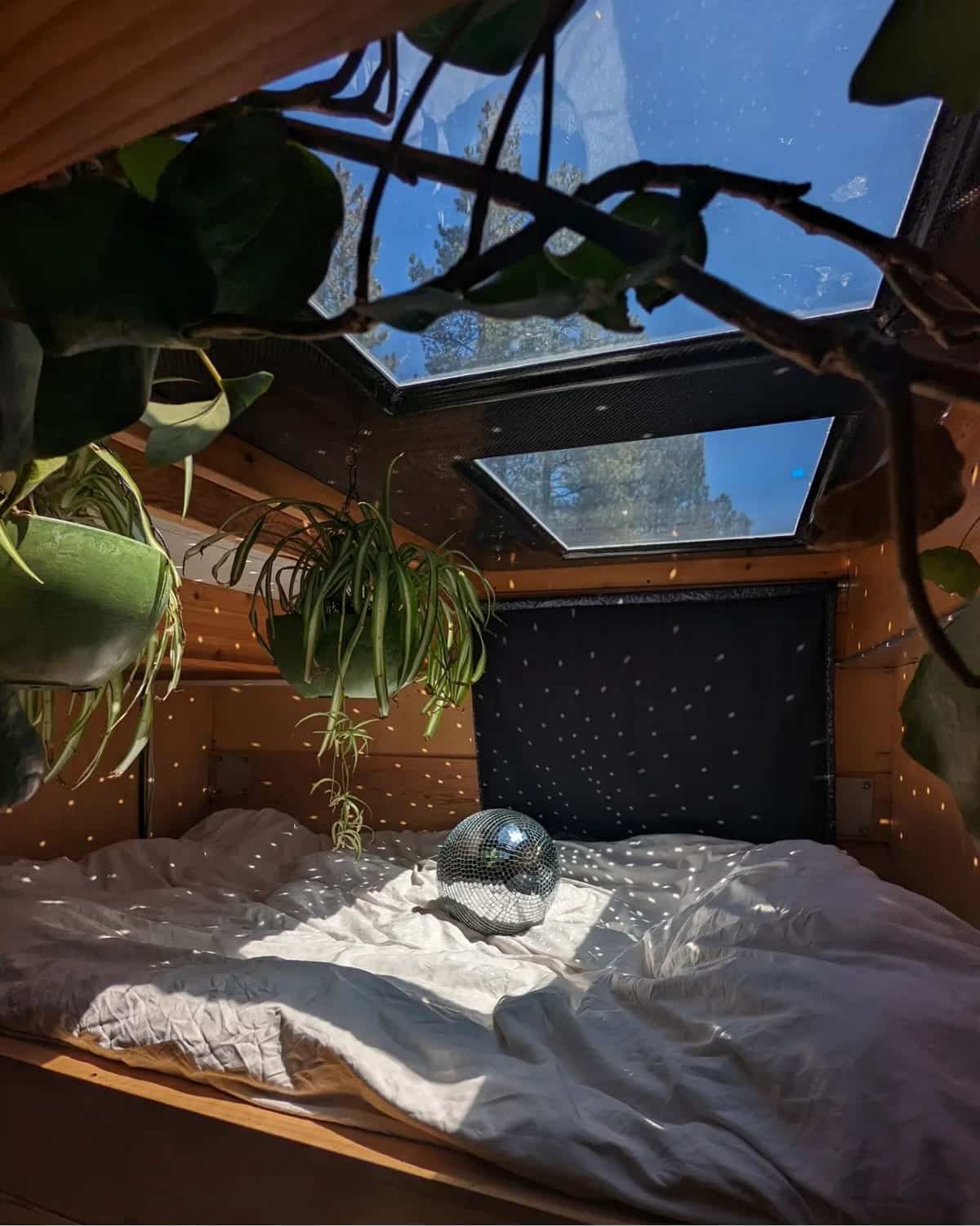 Rory’s bedroom features plenty of houseplants for that homely vibe and a disco ball for a bit of fun. If he wants to take a daytime nap, he can also cover the skylight with a black curtain to keep the sun out. 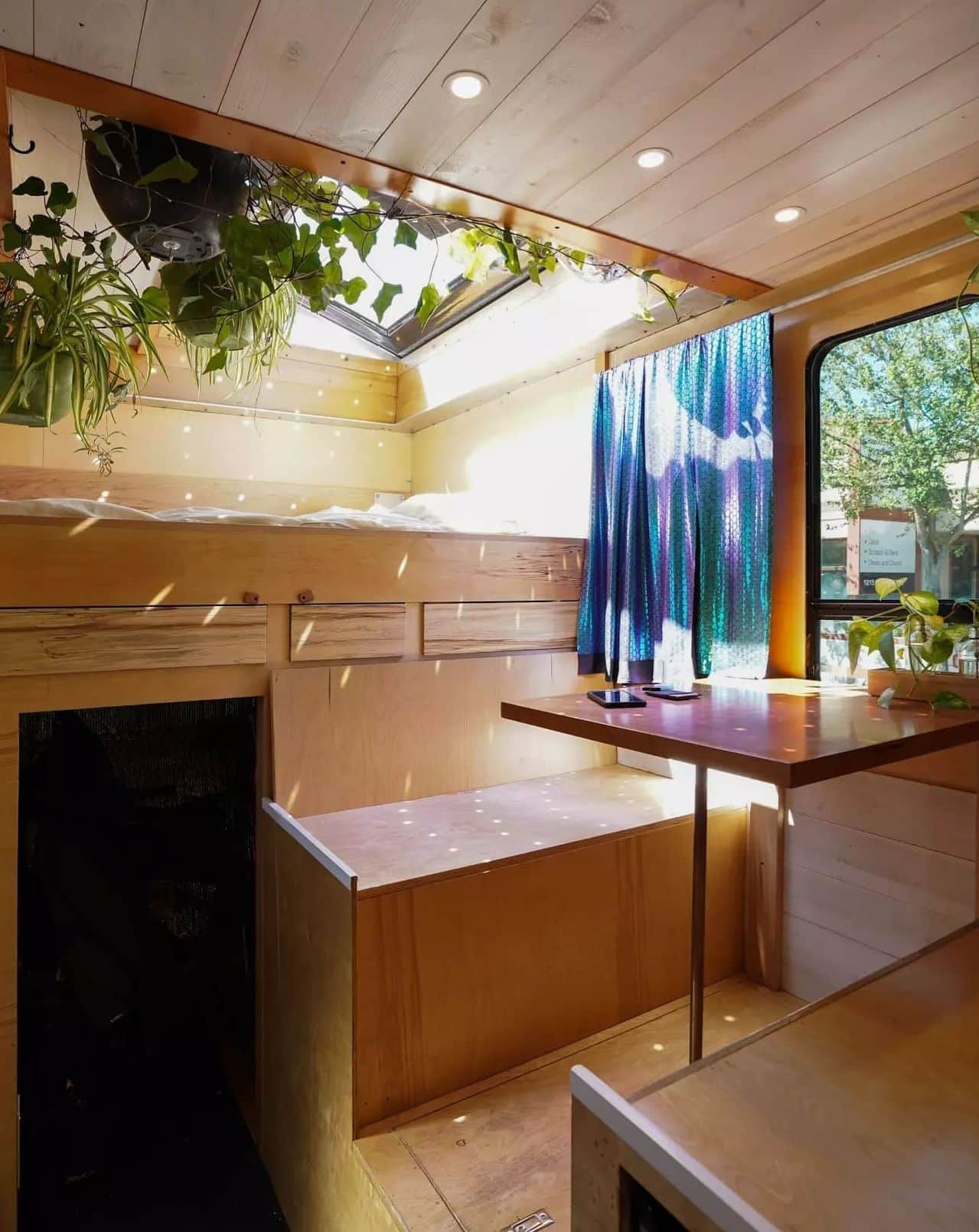 It’s clear to see this camper pod is deceivingly spacious. While there’s already a large kitchen, Rory has also made enough space for a dining area. This has two elevated seats, a fold-down table, and storage built-in to the benches and under the floor. 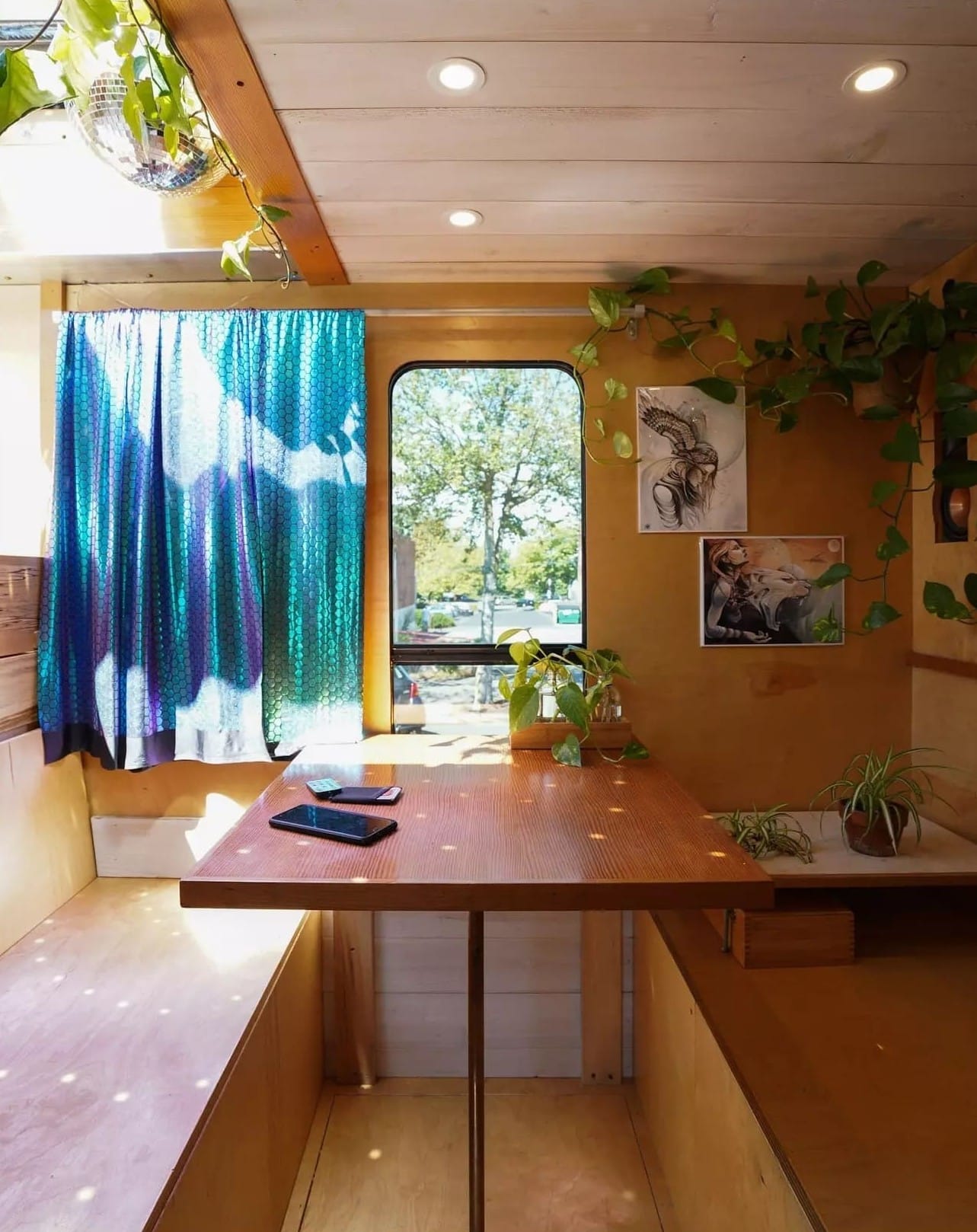 The dining table and seats are well-positioned for natural sunlight, and there’s a curtain that can be closed once night falls. 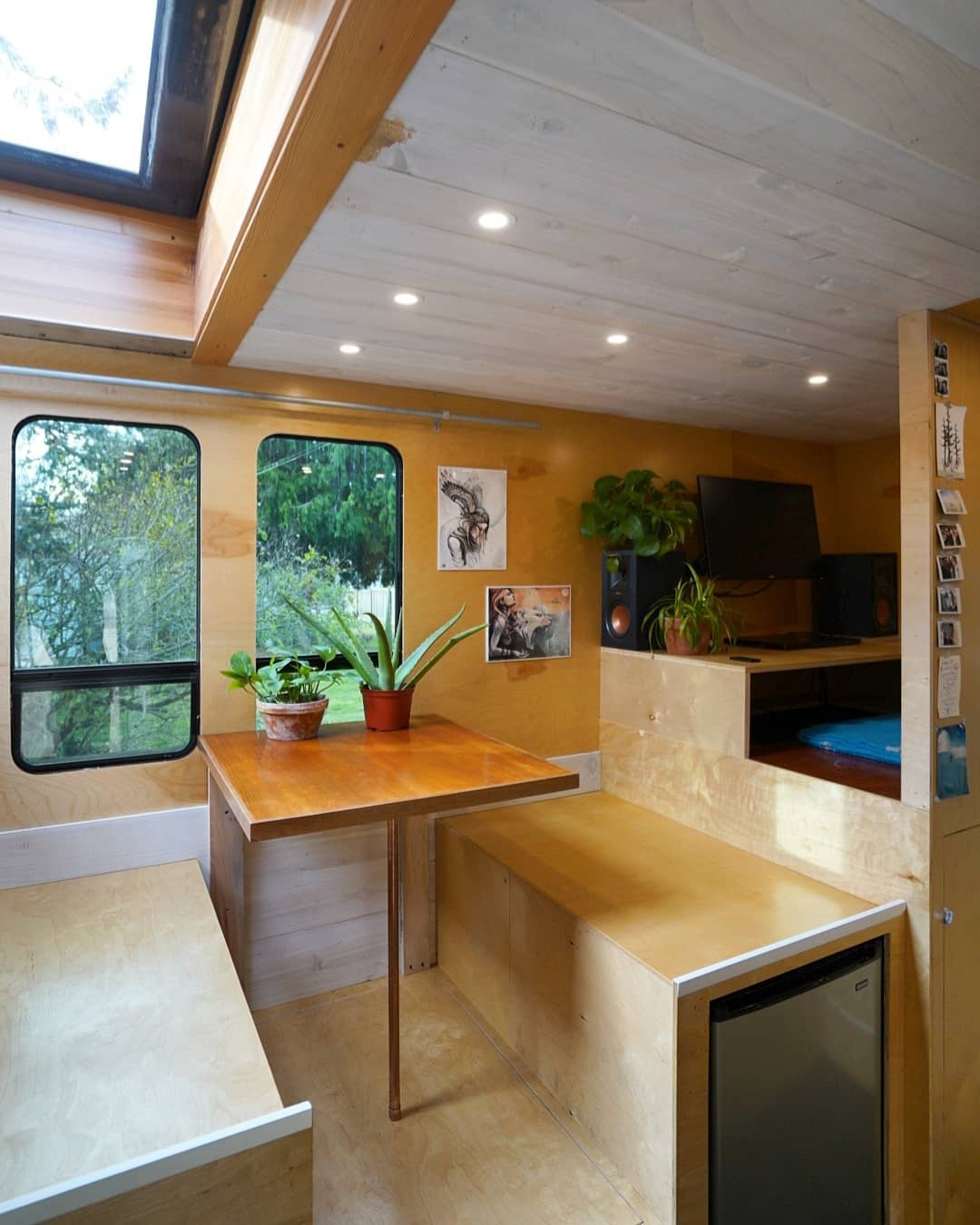 To save space, Rory built his fridge into the bench seat. This seat also houses his subwoofer that connects via Bluetooth to his speakers. 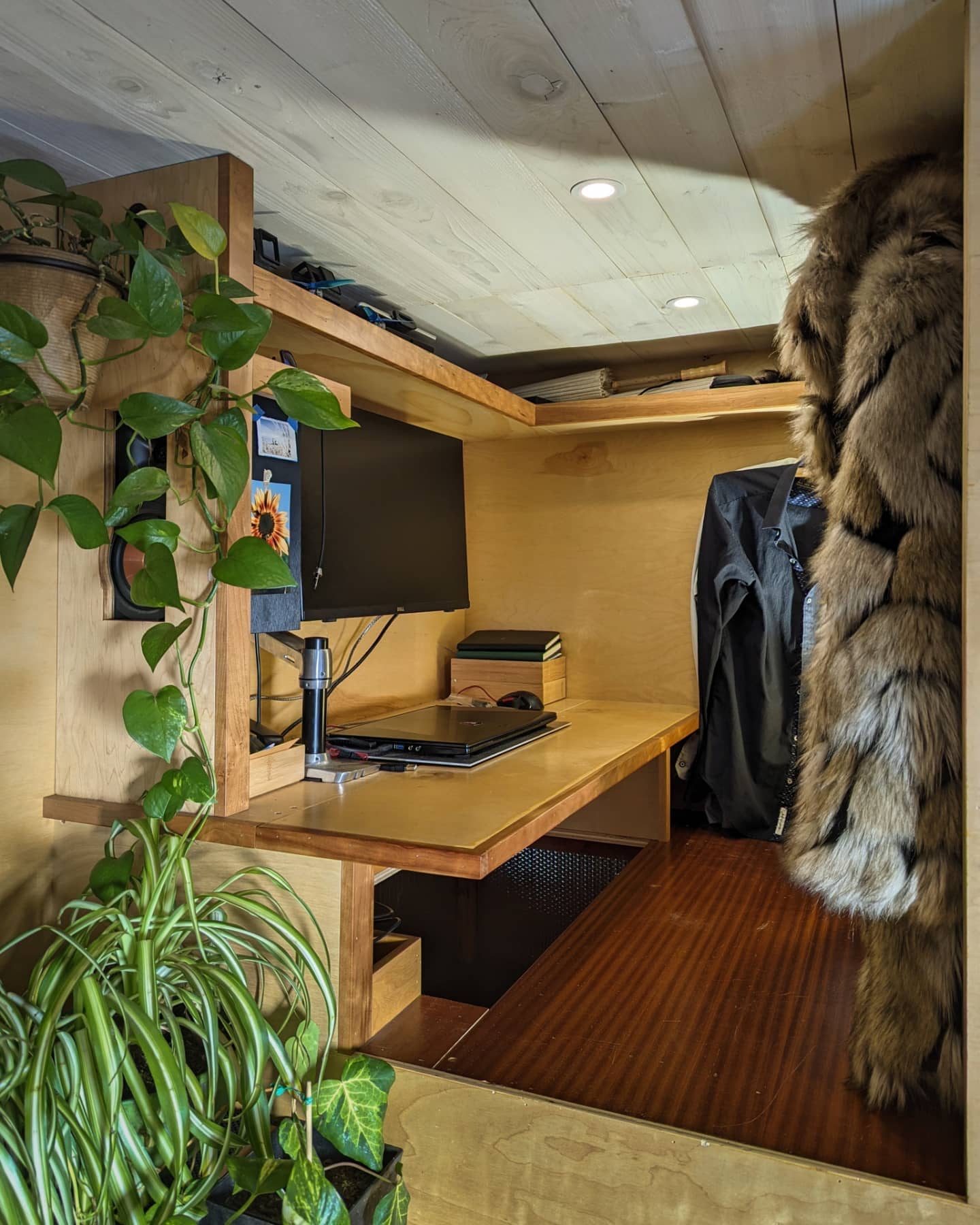 Adjacent to the kitchen lies Rory’s office space, which boasts a drop-down desk he can use when he’s safely parked up. This desk has plenty of space for Rory’s monitor, laptop, and work devices for working on the road. It also includes a mini wardrobe for his clothing. 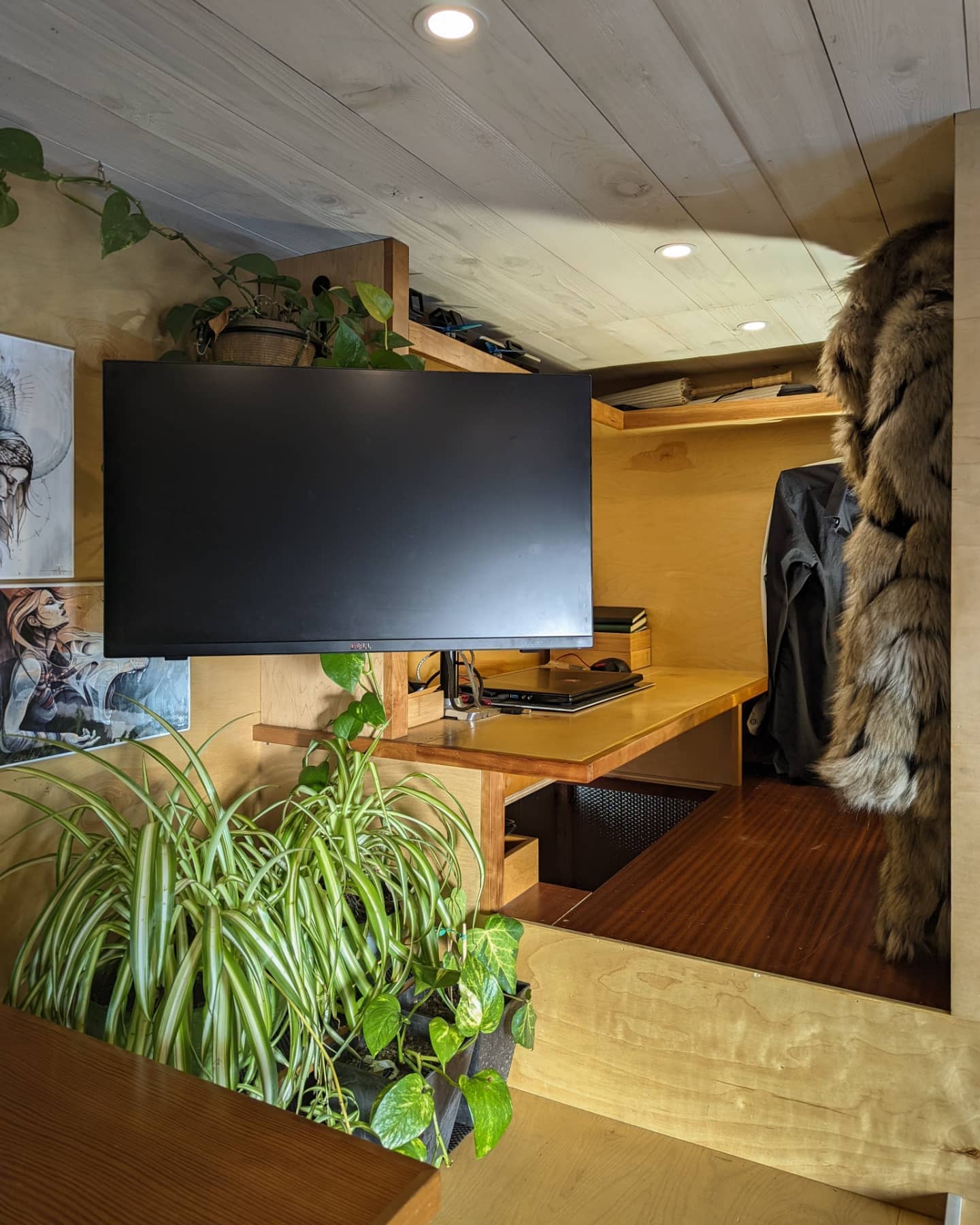 The screen in the home office swivels out, offering optimal TV viewing from almost anywhere in the camper pod.