The average person is now no stranger to off-the-grid living. It’s touted as an alternative lifestyle for those who want a break away from the hustle and bustle of city life but is generally described as something you might do on a short-term basis.

However, there’s no reason why living in a tiny house off the grid can’t be a permanent solution. Gonçalo Marrote and João Filipe from the architecture and woodworking studio Madeiguincho collaborated with Pedro Paredes from Noma to design and build a 188-square-foot cabin named Ursa. Ursa was based on the concept of a living organism and would produce energy while collecting, storing, and reusing rainwater.

According to Gonçalo Marrote, the goal was to reimagine how we live in contemporary society, and they started brainstorming while taking cues from trailer homes. The result is an expansive cabin with two sleeping areas, a workstation, kitchen, bathroom, and terrace to accommodate up to four people. 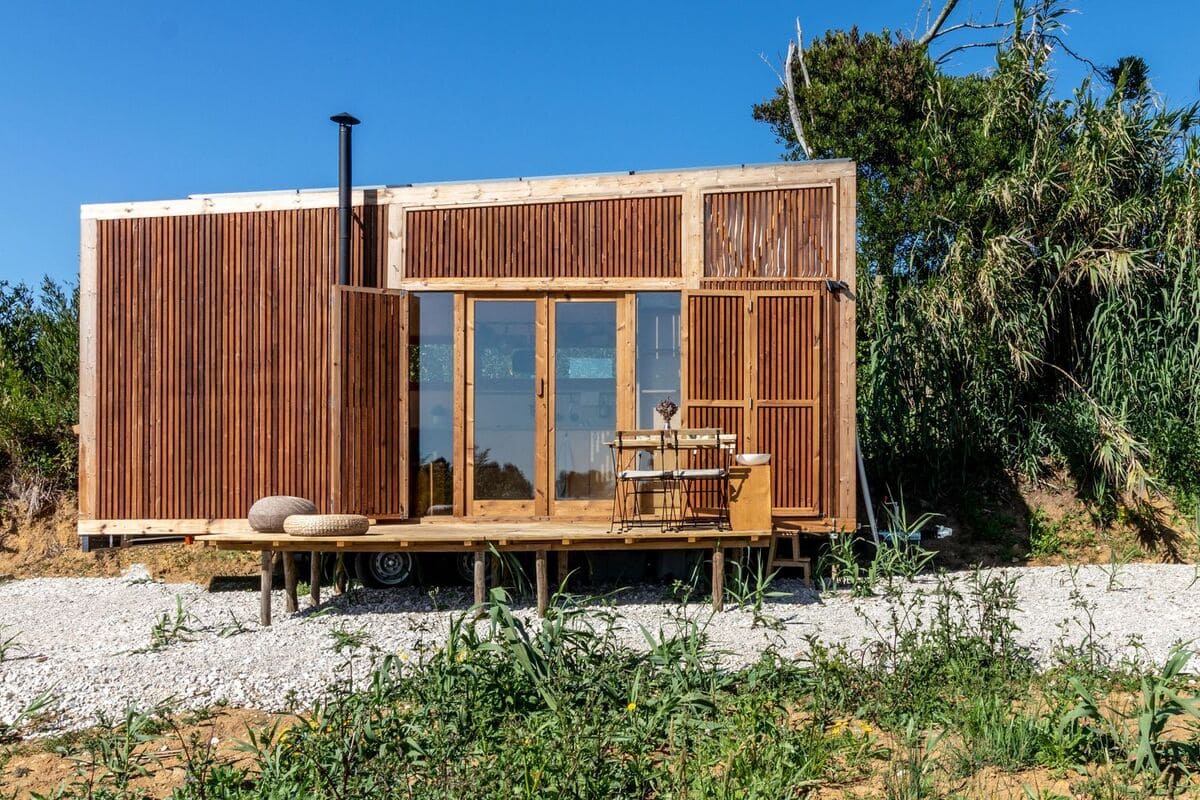 Ursa, the 188-square-foot off-the-grid cabin, was designed and built by Gonçalo Marrote and João Filipe from the architecture and woodworking studio Madeiguincho and Pedro Paredes from Noma. It boasts a steel frame, wood frame, and heat-treated timber exterior. Ursa is also insulated with 40mm thick expanded corkboards and has solid plywood windows and doors with tempered glass double glazing. 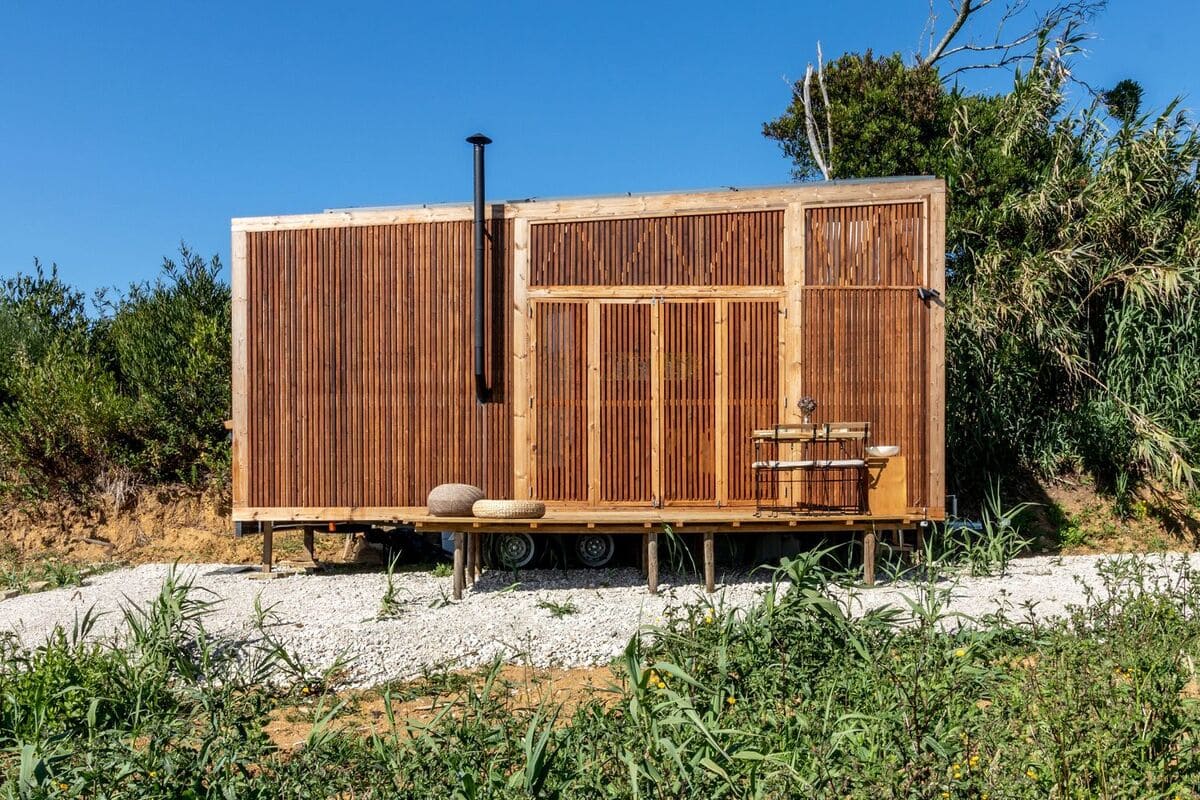 This cabin with a front-facing deck was built with vertical Thermowood shutters for privacy and seamless connection to the land. They make the tiny house all blend into one. 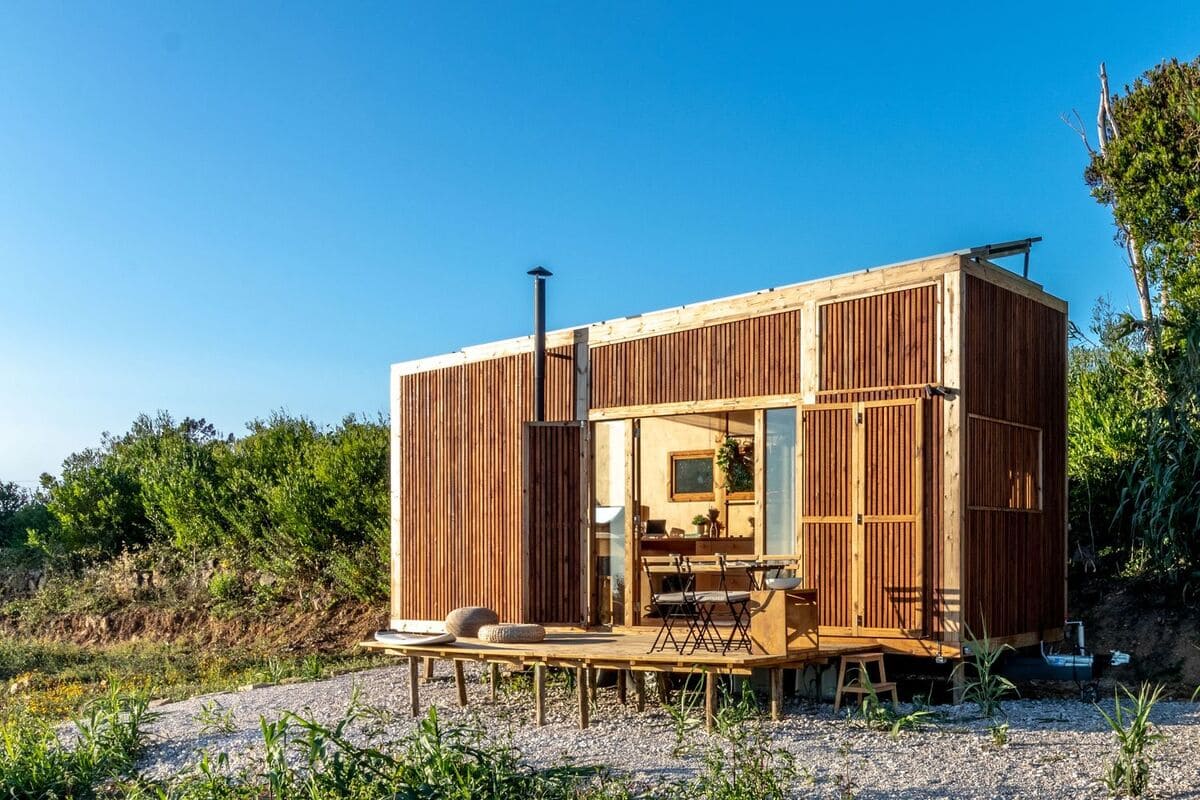 Once you open the Thermowood shutters, this cabin achieves exceptional indoor-outdoor flow, making you feel connected to the land with contemporary glass doors from the kitchen to the deck. 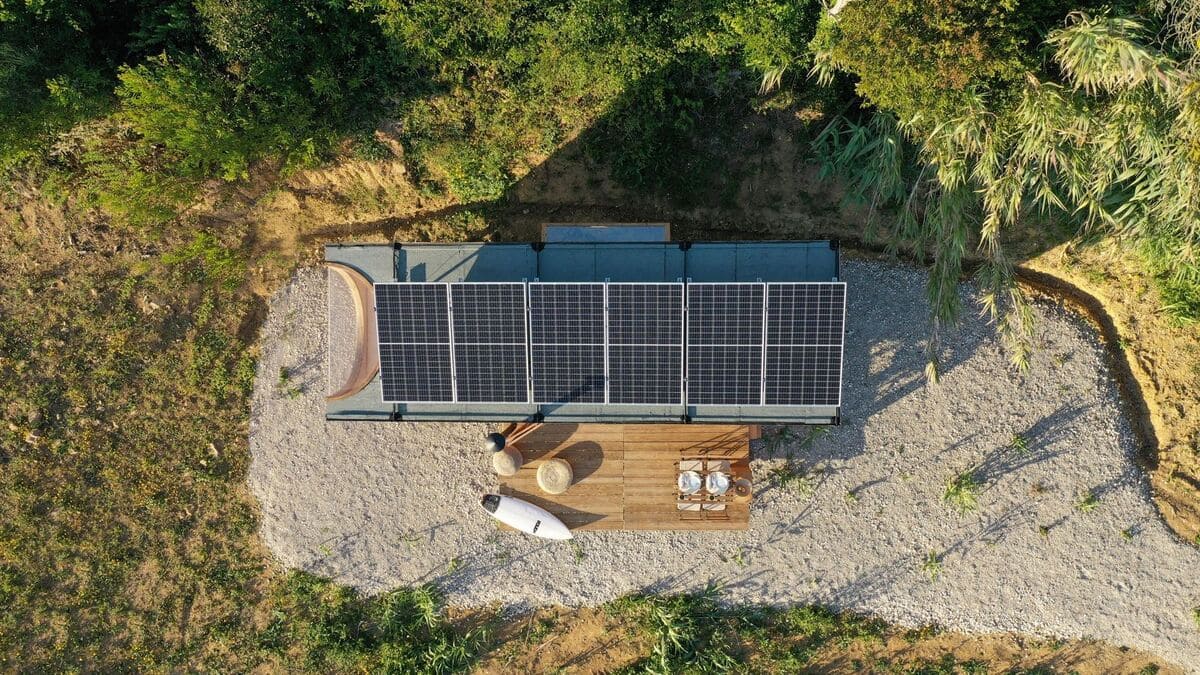 Ursa is no ordinary cabin. It has been designed for off-the-grid living, which means it has a complex yet effective energy and water system. The roof has a five percent slope for rainwater to filter into two water tanks totaling 650L. A pressurized water system can also pump that rainwater into an 80L heat accumulator tank to supply the kitchen and bathroom. Five solar panels facing south on the roof satisfy the energy needs of this cabin, and they can be adjusted by 30 percent for energy production year-round. 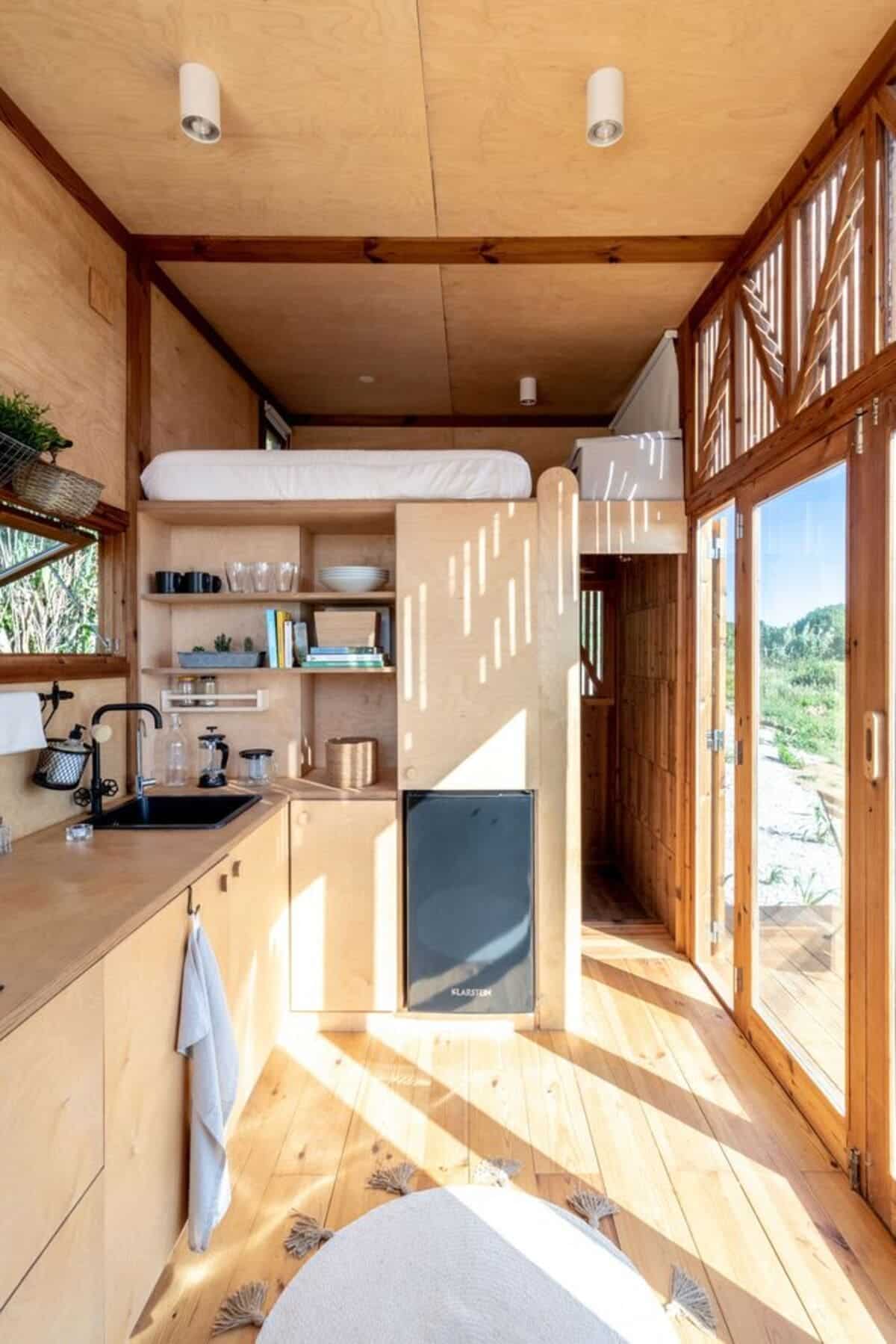 The interior of this cabin is light and bright, courtesy of the 9mm and 18mm birch plywood panels covering the walls and ceiling. 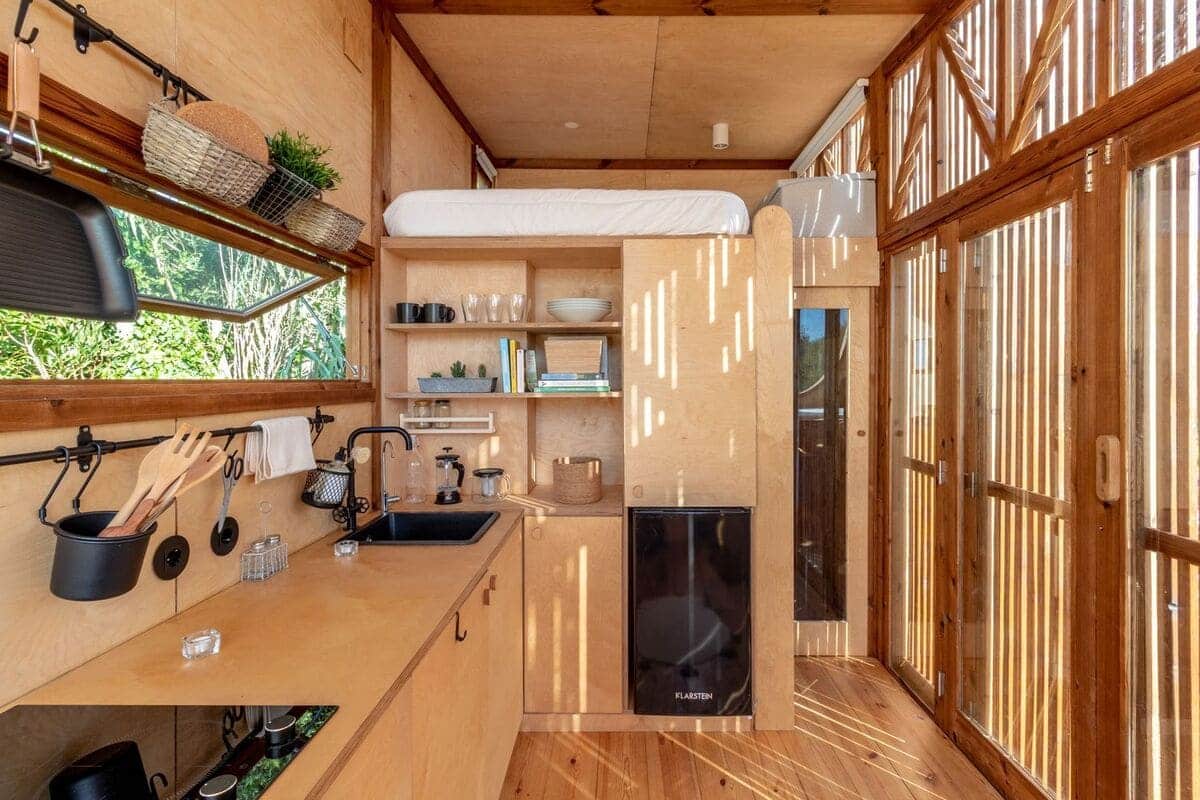 As small as Ursa looks from the outside, the interior is deceivingly spacious. There are two sleeping areas, including a loft area over the bathroom, adjacent to the kitchen. 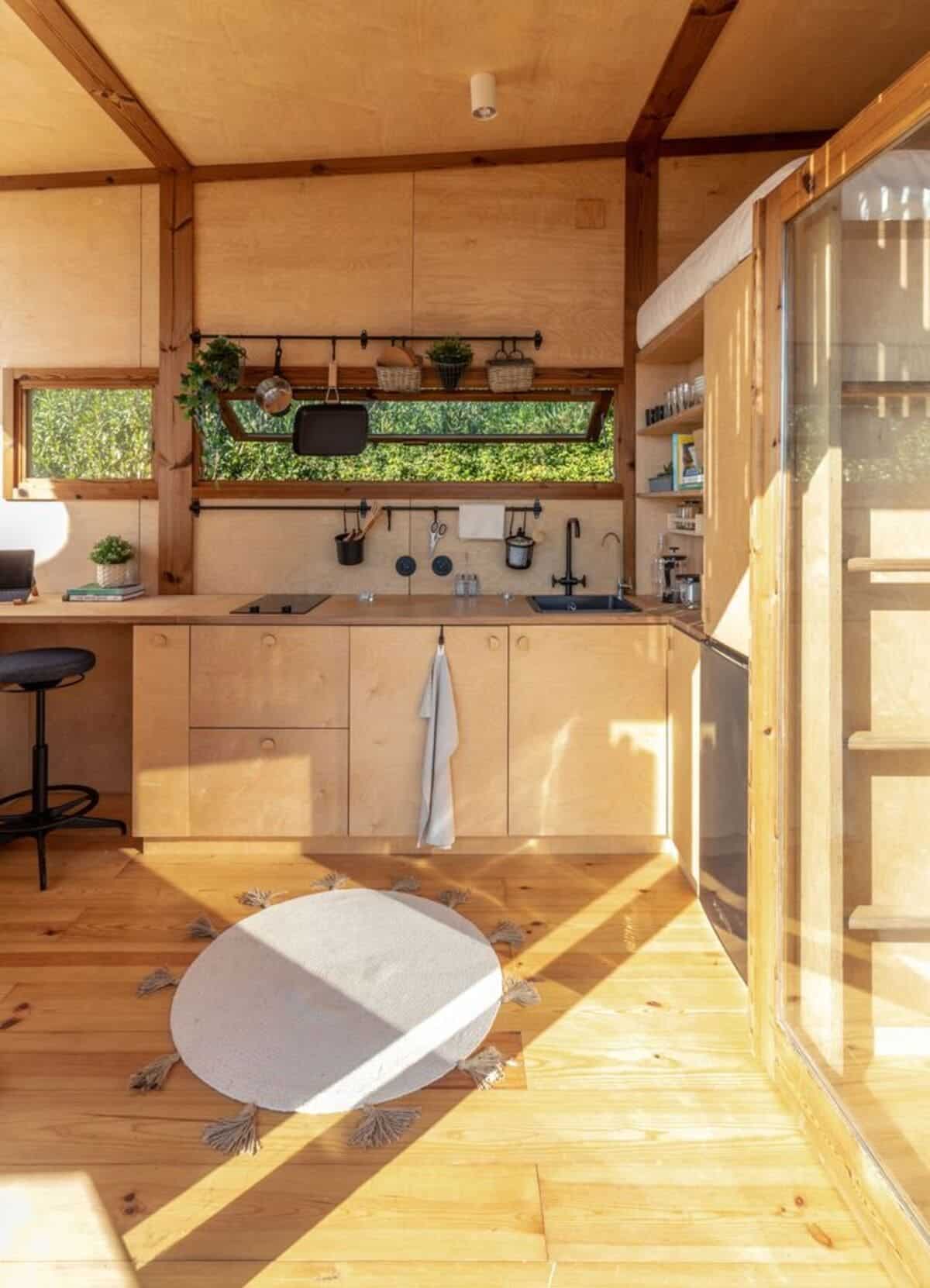 Alongside filtering rainwater for use in the kitchen and bathroom, this cabin also benefits from a three-stage reverse osmosis filter under the kitchen sink for safe drinking water. All water is then stored in a tank for watering plants.

The kitchen counter is versatile for use in any situation. You can use it as a breakfast bar then have it flow seamlessly into a desk area. Plenty of natural lighting makes this a comfortable and functional space to be. 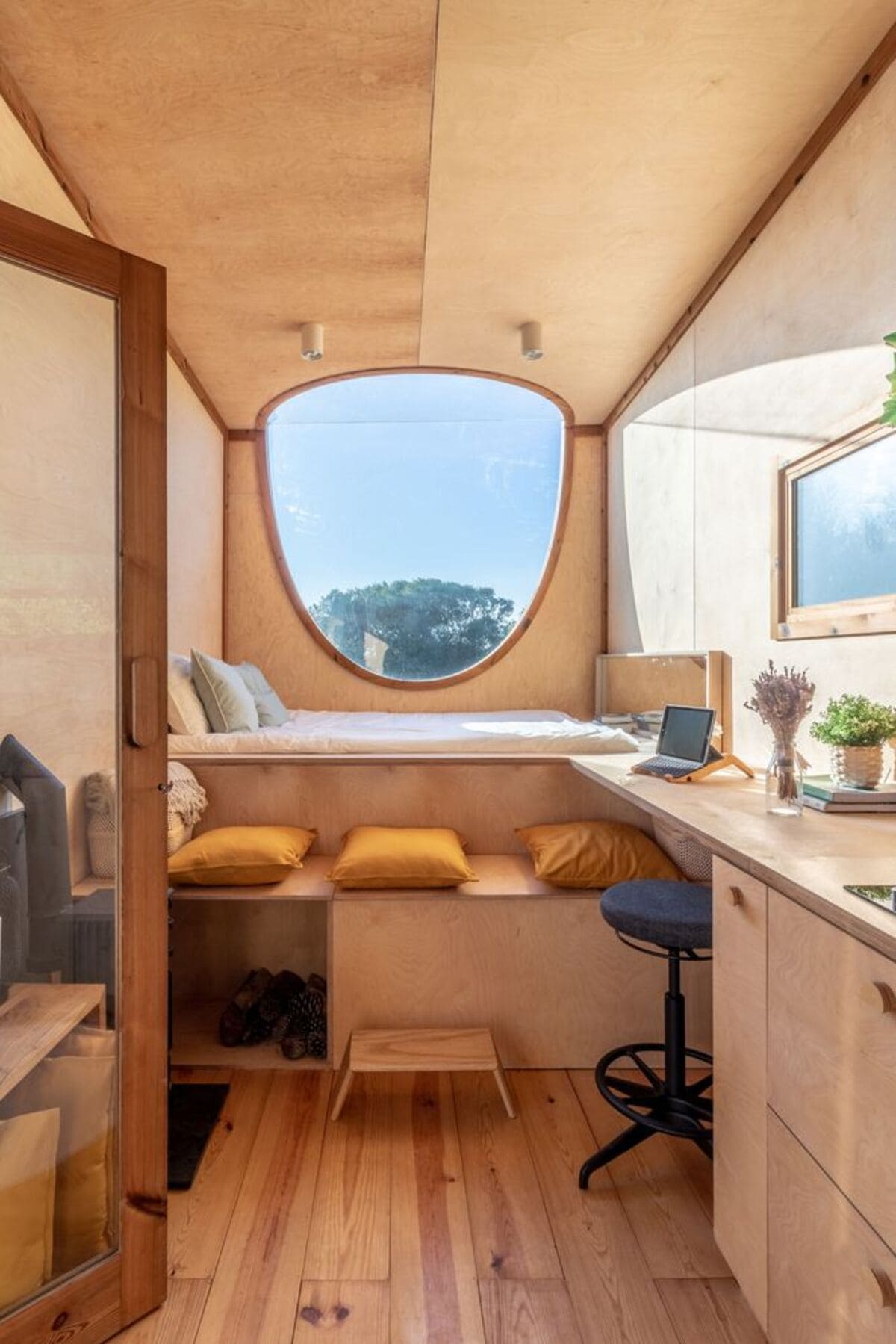 The second sleeping area for two people is on the ground floor, adjacent to a seating space with built-in storage. 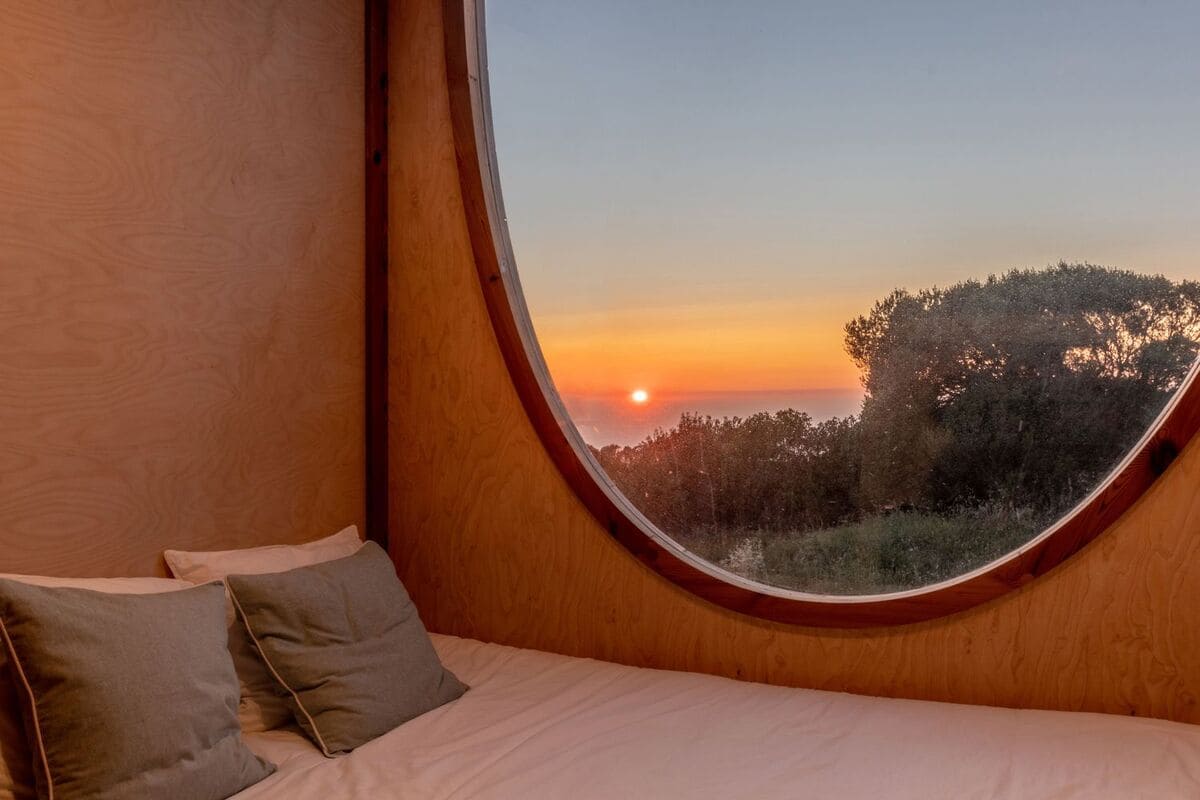 An oval window is positioned next to the bed for two people, allowing for spectacular views and plenty of natural light to break up the plywood interior. 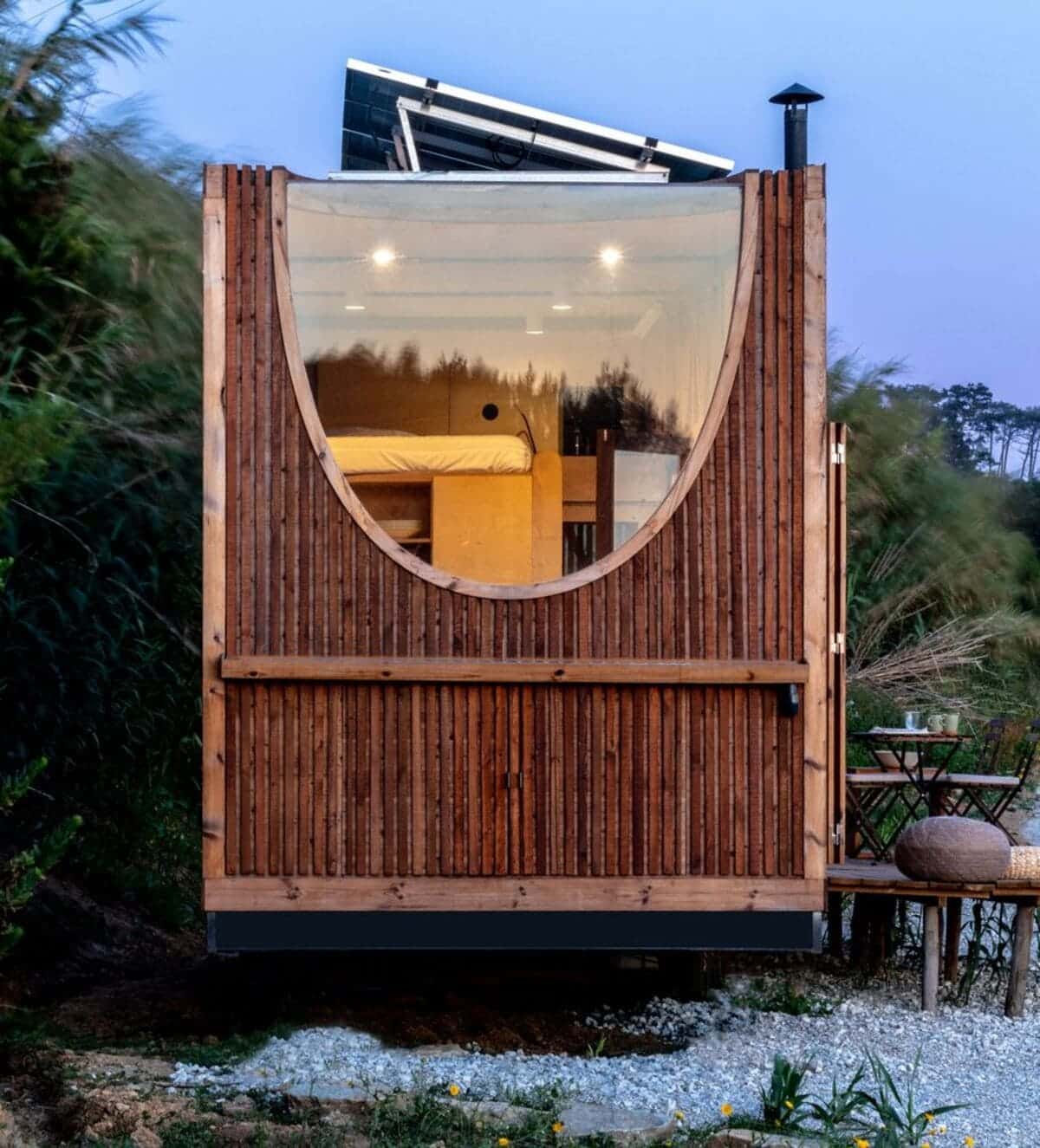 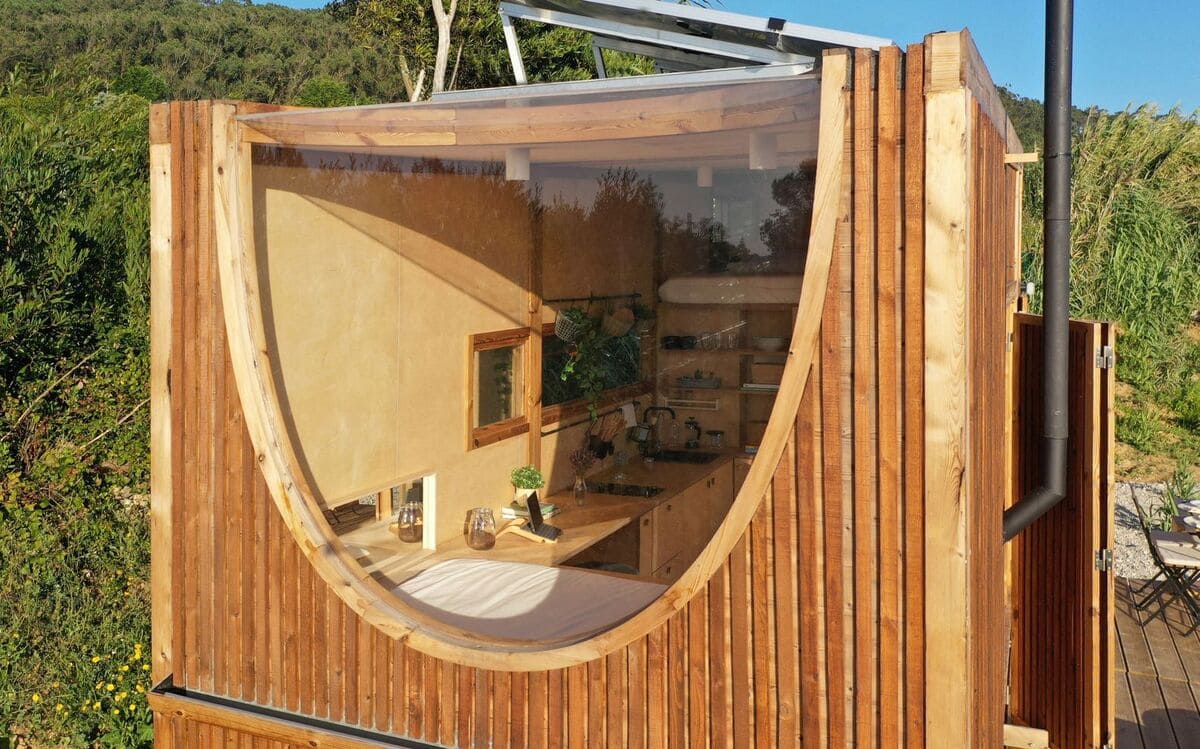 An oval-shaped window was part of the design concept early on. The design team decided to carry on the oval from the façade to the roof for connection to the ocean and sky. 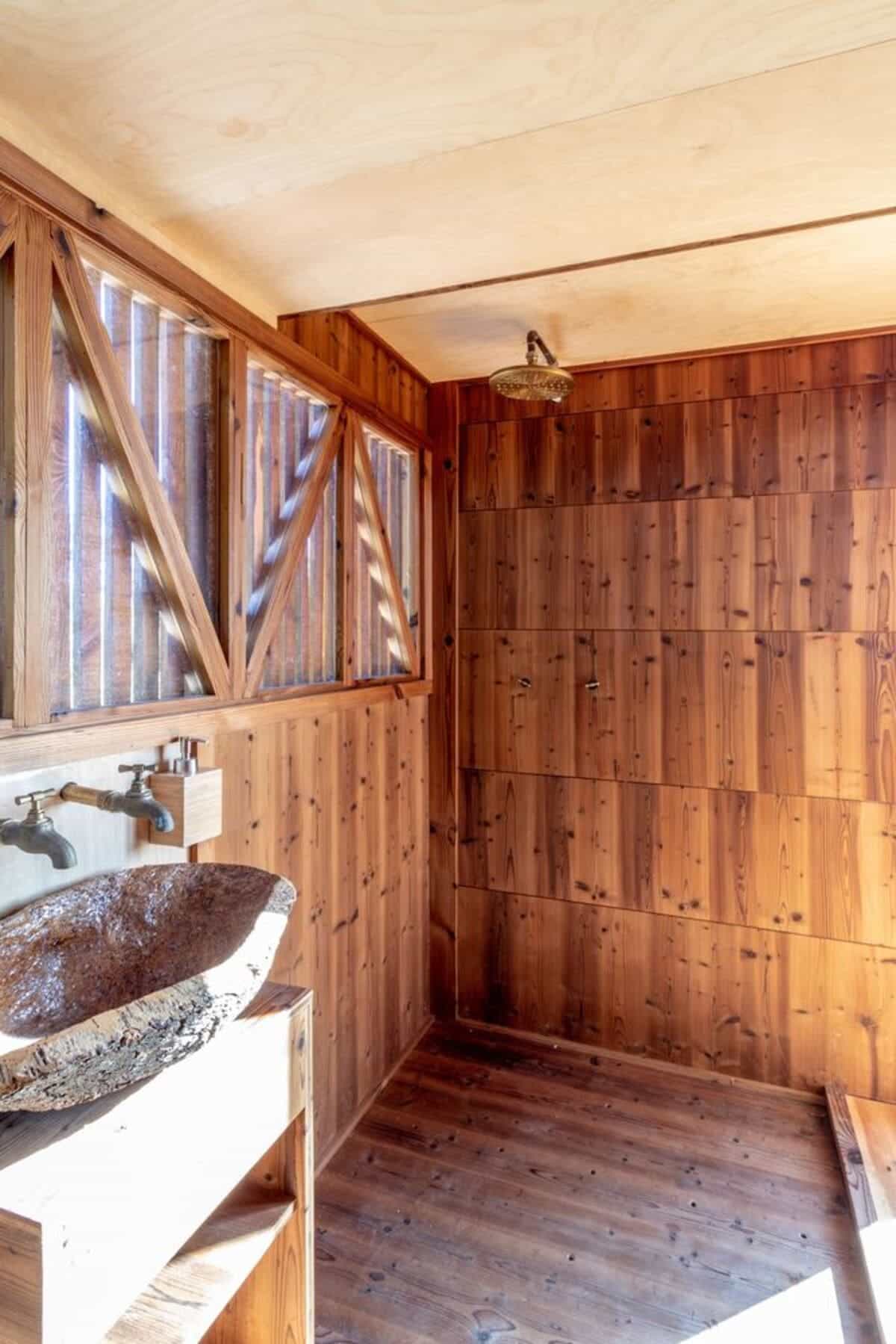 The bathroom is rustic but entirely functional and off the grid. It features a simplistic birch plywood ceiling with gorgeous Thermowood for the wet areas and walls. Contrasting against the warmth of the wood are brass fixtures. This cabin also has an electric dry toilet that produces compost and a lovely natural sink that’s undoubtedly a highlight of this space. Photographs: Junior Carranca