Theresa turned a Mercedes-Benz Sprinter into a spectacular campervan

At 21 years old, Theresa had rarely left her home state of Missouri. She didn’t even realise that she had itchy feet to travel. But on a whim to make it to Burning Man 2009, she decided to drive from St. Louis, Missouri, to Reno, Nevada, and quickly caught the travel bug.

Her first long-distance road trip turned into several. Then, in just a few short years, she had visited 30-40 places across 50 states. She funded these trips by booking photography and makeup gigs wherever she went and traveled in a Honda Accord while sleeping on people’s couches or in spare rooms.

Once the travel bug had her firmly in its grasp, Theresa upgraded to a Honda Odyssey, which she turned into a home on wheels with a platform and bed. But it wasn’t enough. Theresa wanted a home away from home, which came in the form of a Mercedes Sprinter 2007 high roof model 2500.

While the van was a significant investment, it was a worthwhile one. She knew having a late model van would make it more reliable, and it would also get her off people’s couches and into her own space. She could sleep, eat, and work on the road, which drove her to transform the Mercedes into a spectacular campervan.

If you’ve never so much as picked up a power tool, then seeing what Theresa produced will give you a lot of motivation. Neither had she. Theresa had no knowledge – practical or theoretical – on what it would take to create a campervan. But she did it anyway.

She made sure she could always see the bigger picture and sought help only for electricity. Everything else she picked up along the way through research, watching videos, visiting stores, and talking to people. Theresa then realised she had a knack for customising things and making them beautiful. Rosebud, the Mercedes Sprinter, was finally born. 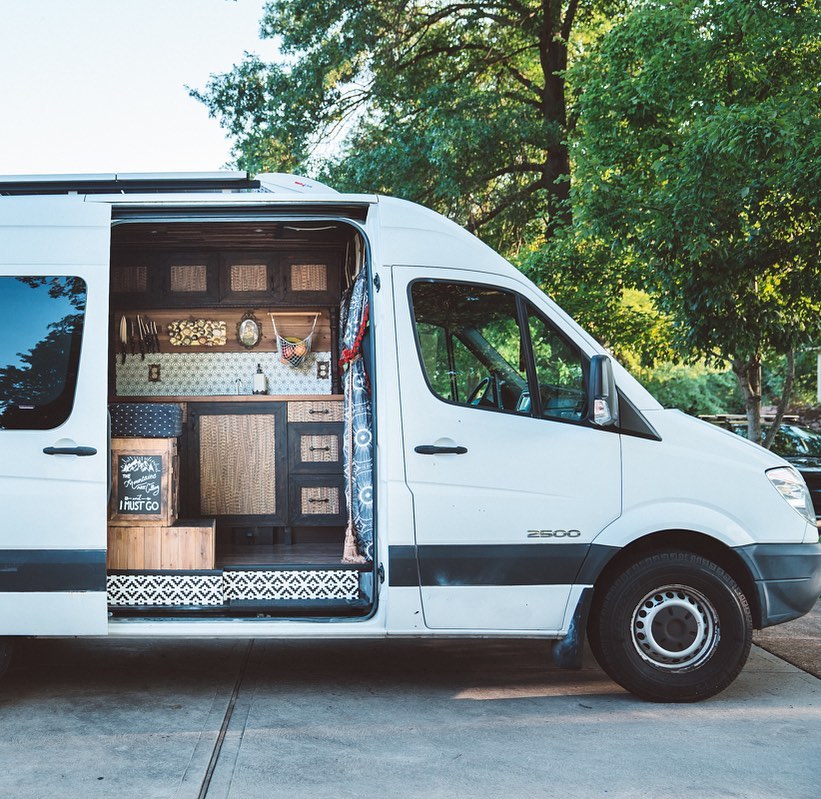 Missouri-born Theresa purchased a Mercedes-Benz Sprinter 2007 high roof model 2500 and converted it into a campervan on her own. She loved the idea of reliability with a late model vehicle and decided a high-roof option would offer a lot more practicality as she travelled around the country. 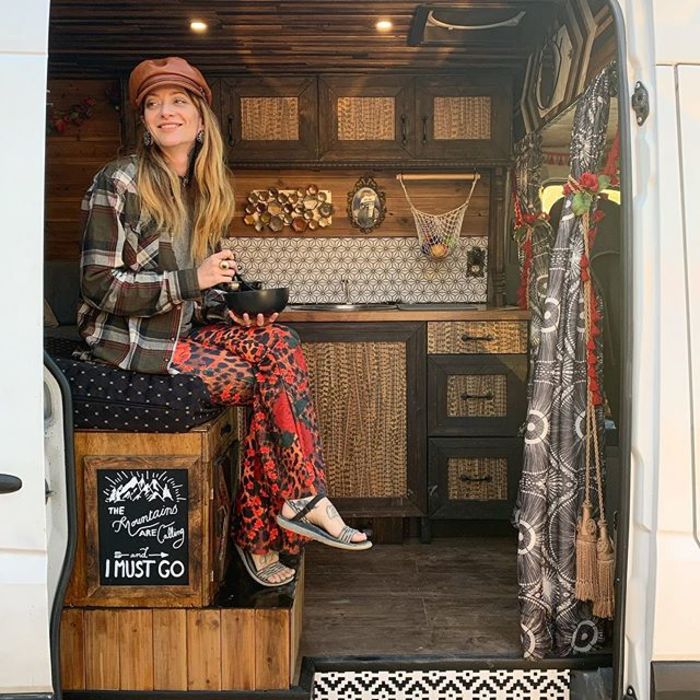 Everything about Rosebud was well thought out to cater to Theresa’s exact needs. For example, what she’s sitting on in this photo is a compost toilet with a urine diverter. Solids go into a bucket with cedar chips. The toilet also converts into a seat with couch cushions with a section that flips into a countertop.

She also uses this area for cooking. Behind the driver’s seat is a second cushion to convert the entire space into a bed at night. Underneath is also where she hides her induction stovetop. Theresa doesn’t like propane gas, so she draws from her vehicle’s electricity supply when the time comes to prepare a meal. 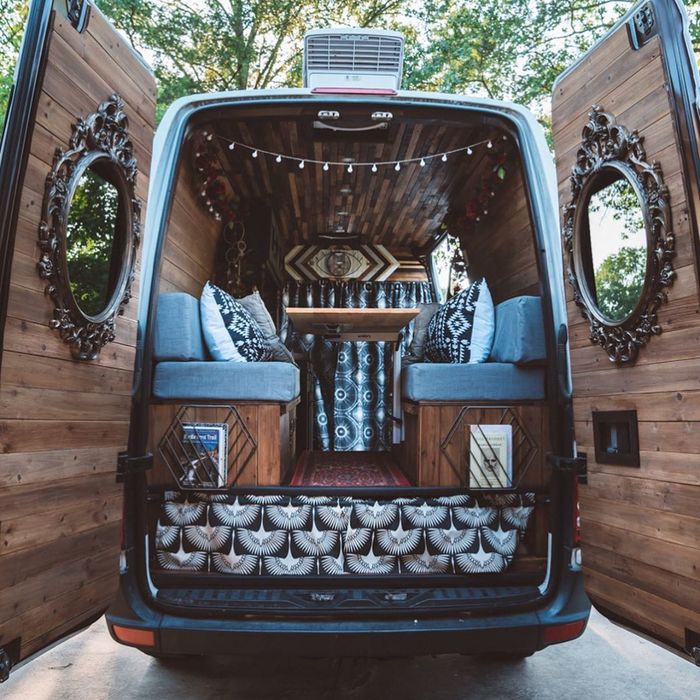 The rear of the vehicle is as exquisitely designed as the front. There are little bookshelves for reading material and a curtain to hide the storage space underneath the platform. 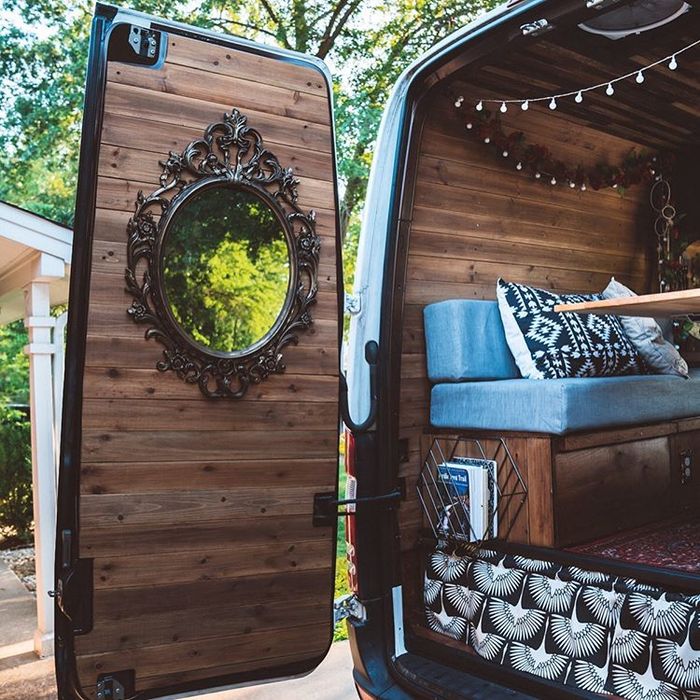 Theresa painted IKEA mirror frames to look like ornate picture frames. As a photographer, she liked the idea of having the windows look like picture frames so that when she looks out to the scenery, it’s “picture perfect”. 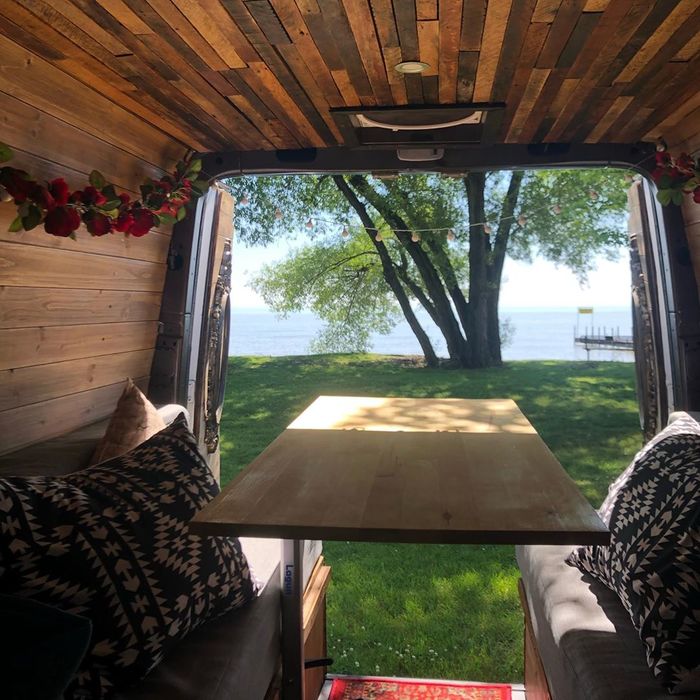 Theresa put a lot of time and care into her ceilings because she wanted a warm wood feel on the van’s interior. She salvaged the wood from old buildings in St. Louis, bleached them to remove spores and odors, then used shellac to seal them. 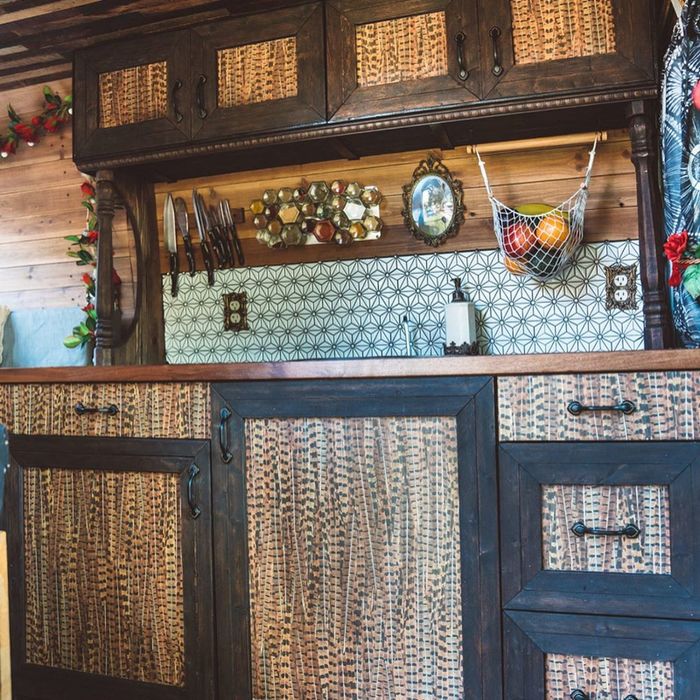 Theresa is most proud of her kitchen area, which was painstakingly put together with various products. The cabinets are from IKEA, but she added wallpaper for a unique look to match the rest of the van. She added support poles for the upper cabinetry, which offers the illusion of a buffet table. 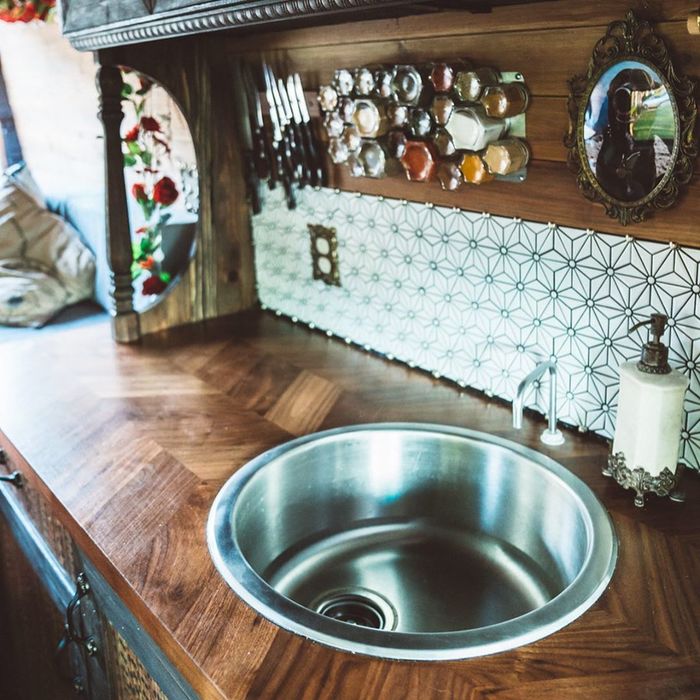 A lot of people are drawn to Theresa’s backsplash in her kitchen. It consists of tiles from Lowe’s with black grout that complements the wood benchtop beautifully. Theresa is also most proud of her spice rack and magnetic knife holder. She removes the knives while travelling. 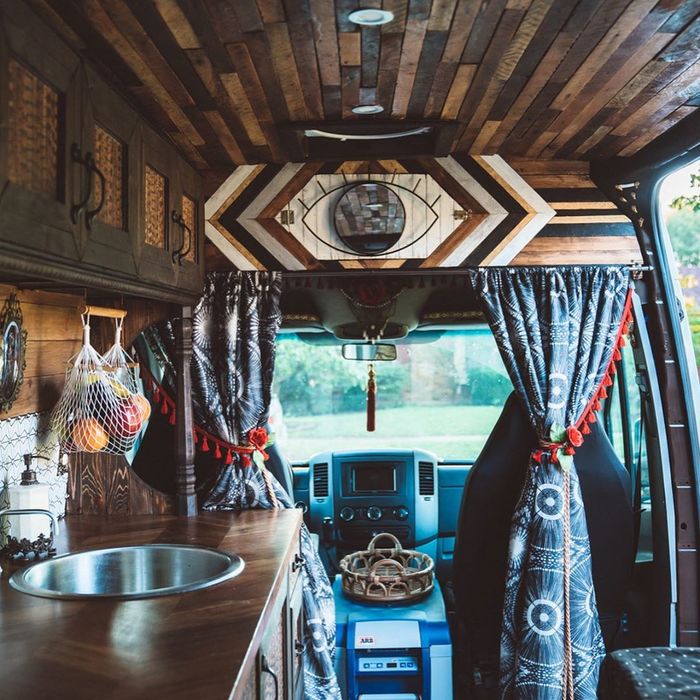 No campervan is complete without a fridge, and Theresa got quite smart with her placement. She installed a small fridge between the front seats, which has enough space for 1-2 people’s food. 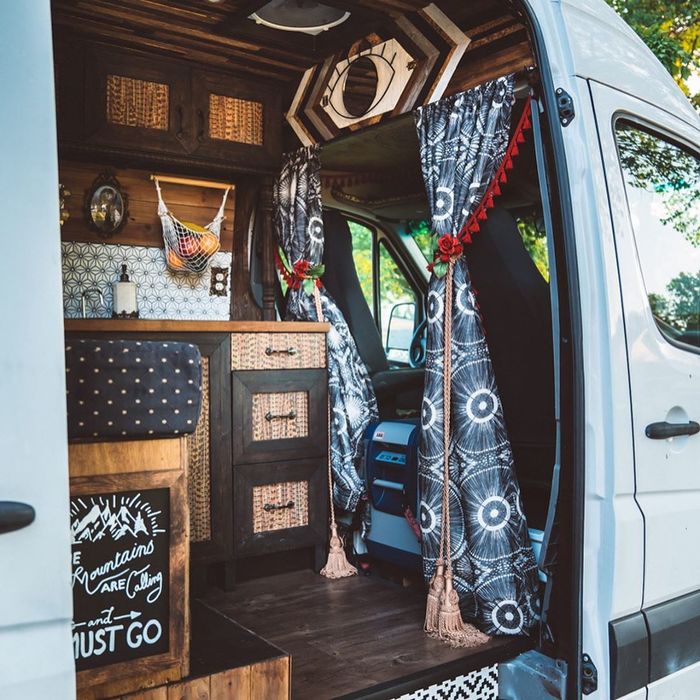 Curtains feature in the central area to block off the back of the van from the driver’s space. Theresa purchased two pairs from Target and sewed them together. 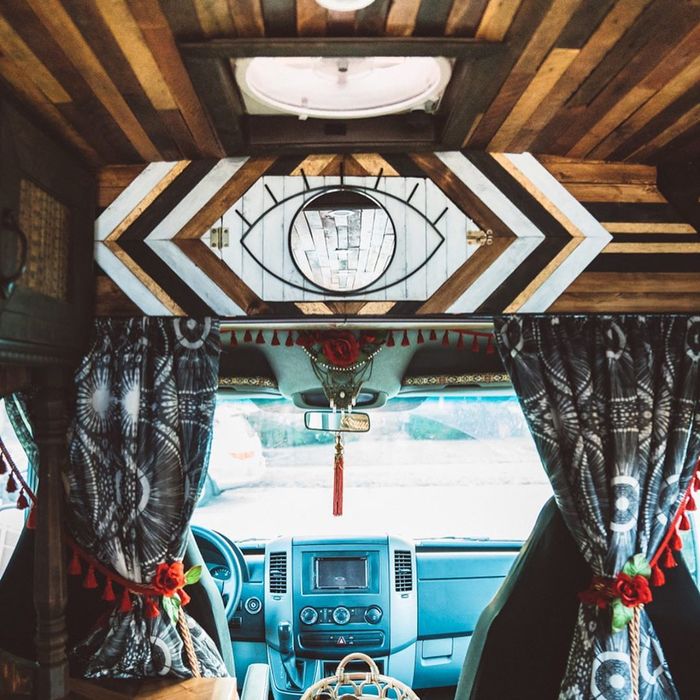 The front of the van is where Theresa got most creative, and it’s a source of pride for her. She has a compass painted on the underside of the headliner shelf. As she travels, she writes down the different places she goes as a souvenir rather than collecting bumper stickers as some travellers do. You can follow Theresa on Instagram @girlwithnocompass and her website Girl with no compass