This Bus Conversion Has One Of The Best-Organized Kitchens You Will Ever See!

Holly and Dustin Sasquatter were tired of paying rent, having excessive bills, and taking time off to travel. Essentially, they wanted less work and more play and knew their current lifestyles wouldn’t allow that.

That led them to think about living in an RV, but they quickly realized the available options didn’t suit their needs, and especially not for life on the road. According to the Sasquatters, they looked the same, didn’t appear well-made, and they also didn’t like the styles.

After browsing the internet, they stumbled across people who had converted their school buses into houses on wheels, and their minds were made up. That’s what they wanted to do. They were further convinced when they encountered a community of bus people on the internet consisting of families, couples, and individuals just like them.

The first step into bus ownership involved flying to Florida to purchase their 216-square-foot bus for $7,000, and they immediately started turning it into their brand-new house on wheels. 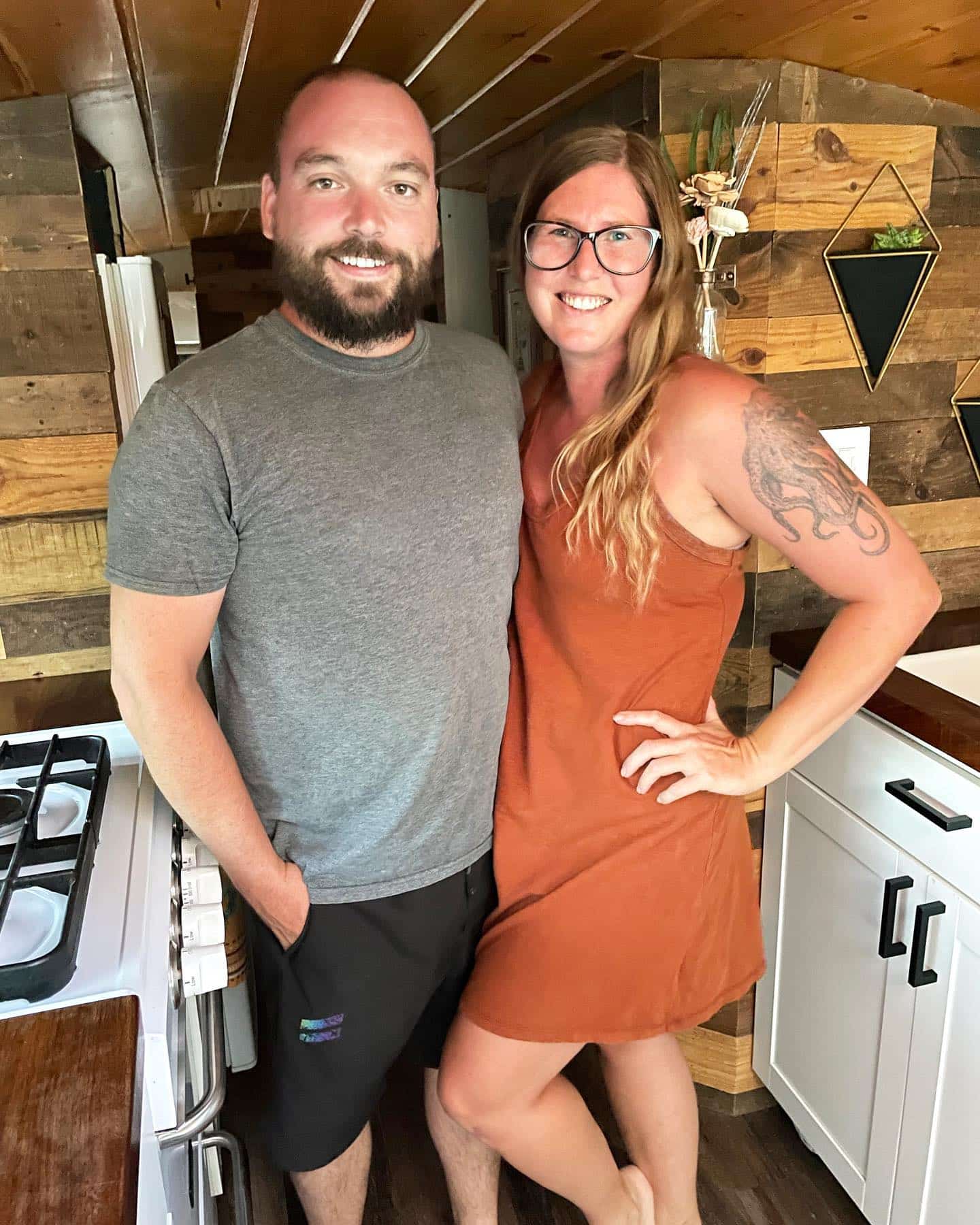 Dustin and Holly knew nothing about renovating a bus, so they encountered one challenge after another. They took down the bus’s interior walls at least three times and had to troubleshoot with plumbing, electrics, and various layout changes.

However, they finally reached the finish line and have been living in their bus for two years. In fact, the renovation project even brought about a passion for the industry, leading them to start a business helping other people build their own buses. 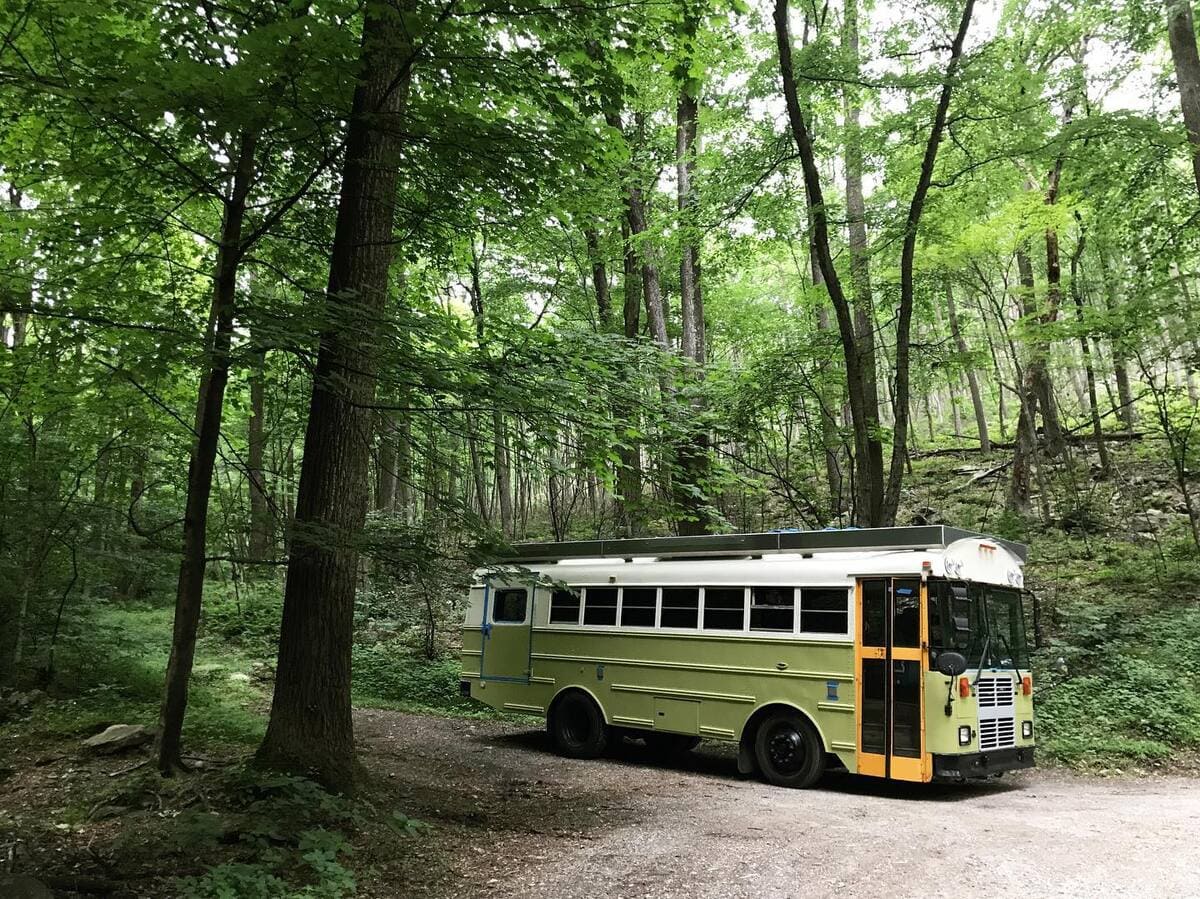 Holly and Dustin Sasquatter purchased a 216-square-foot bus in Florida for $7,000 and turned it into a house on wheels. They painted it in two-tone coloring with green and tan to tie in with nature and installed solar panels on the roof to harness power from the sun while they remained stationary. 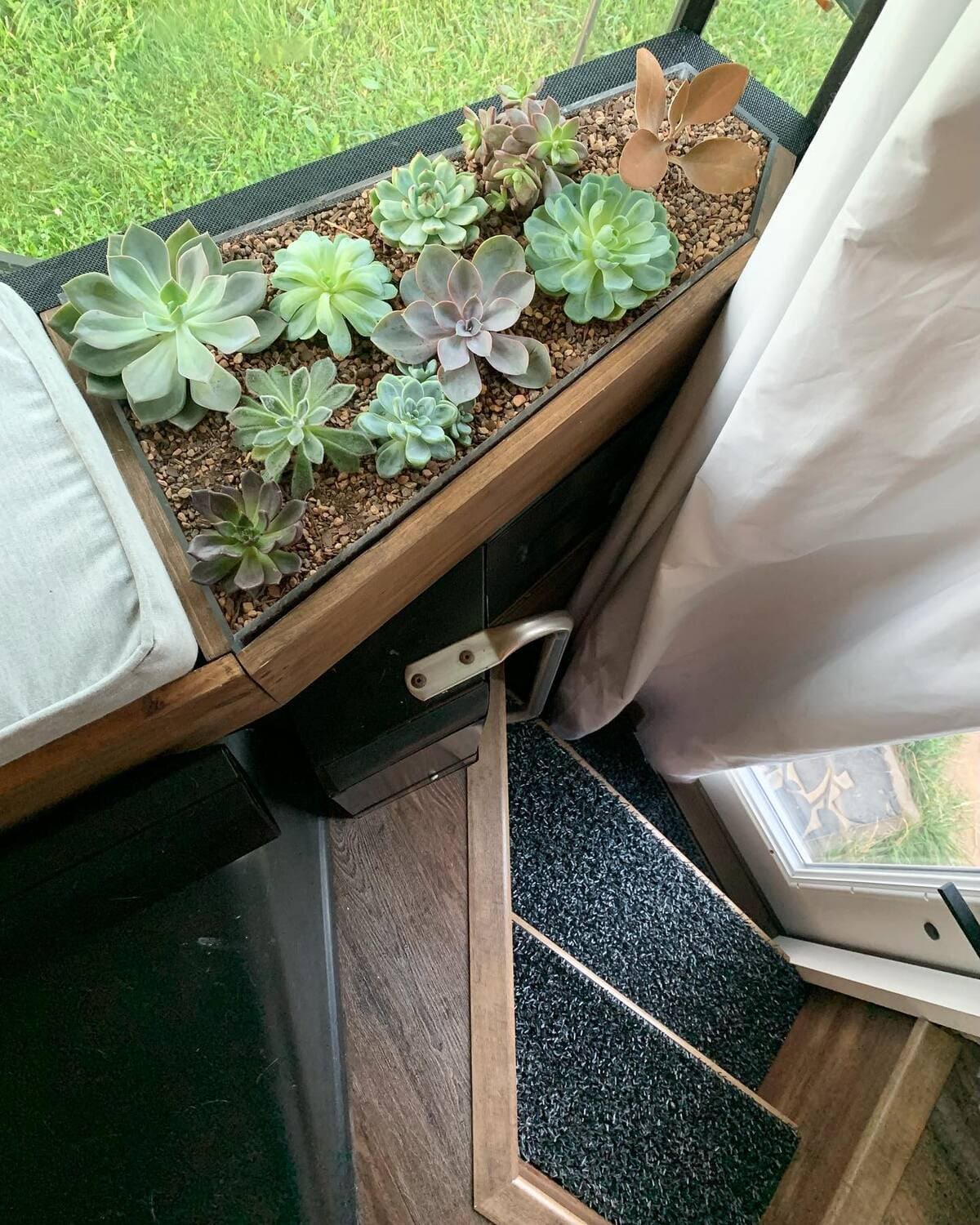 Every house needs a garden, and houses on wheels are no different. Holly has installed a succulent garden at the front of their bus to make it feel more like home. 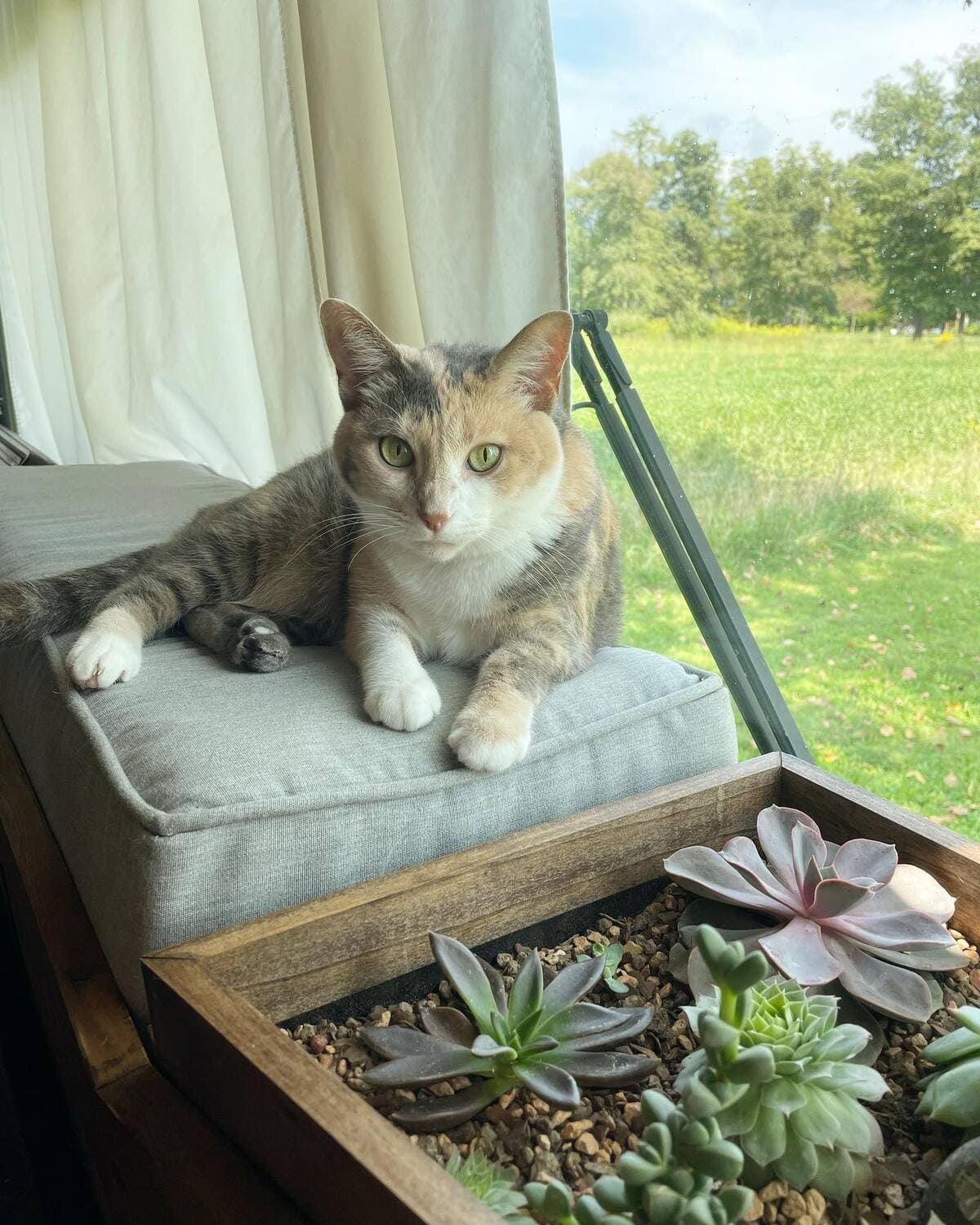 Holly and Dustin’s cats are along for the adventure, and she ensures they live their best lives every day. They installed a cat bed at the front of the bus, which gave them an ideal spot to lie in the sun. 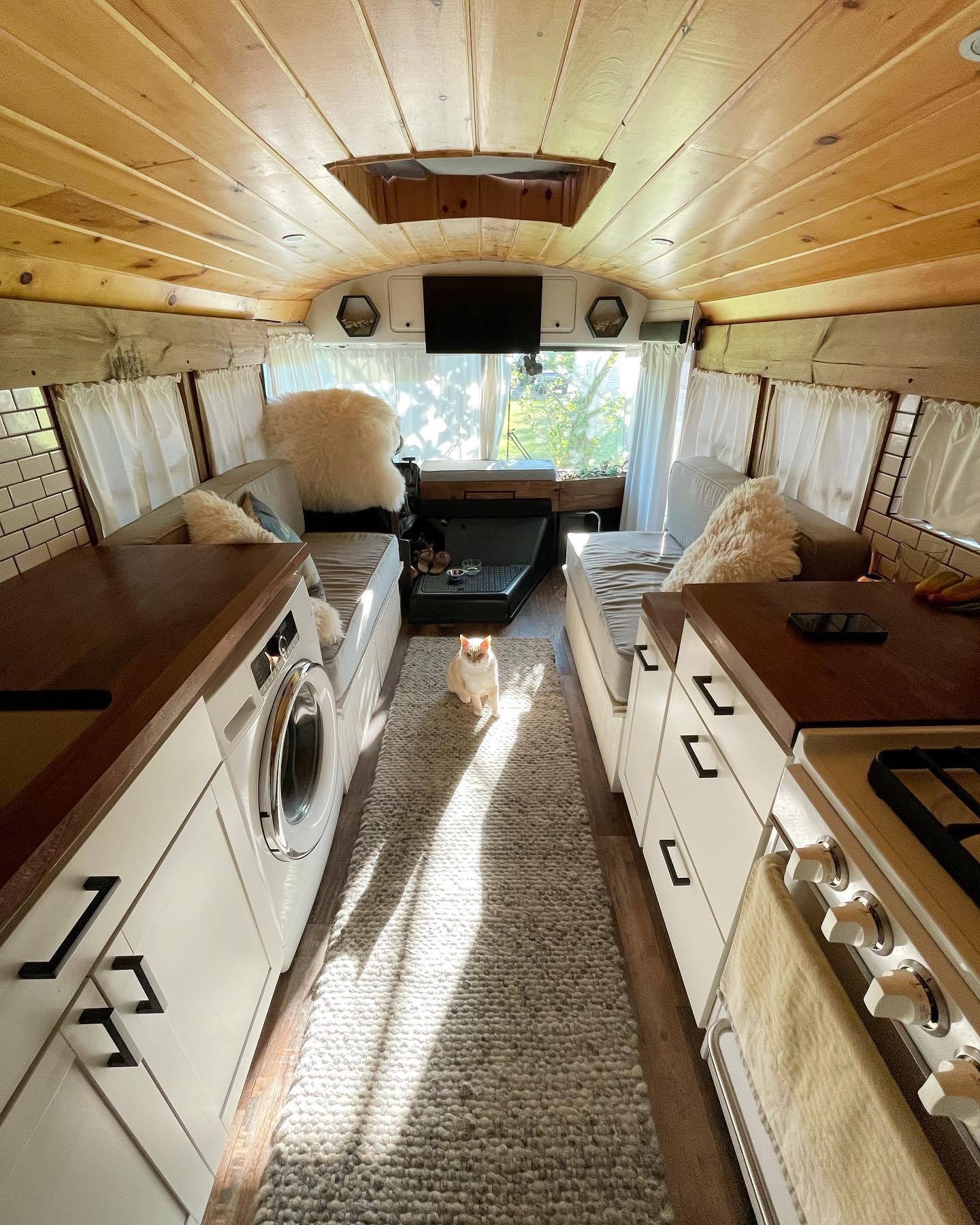 Tech is a huge part of Holly and Dustin’s house bus build. They have a computer monitor at the front linked to another one in the bedroom. This means they can be in different parts of the bus and watch the same things on TV. They can also play video games together while in different areas. 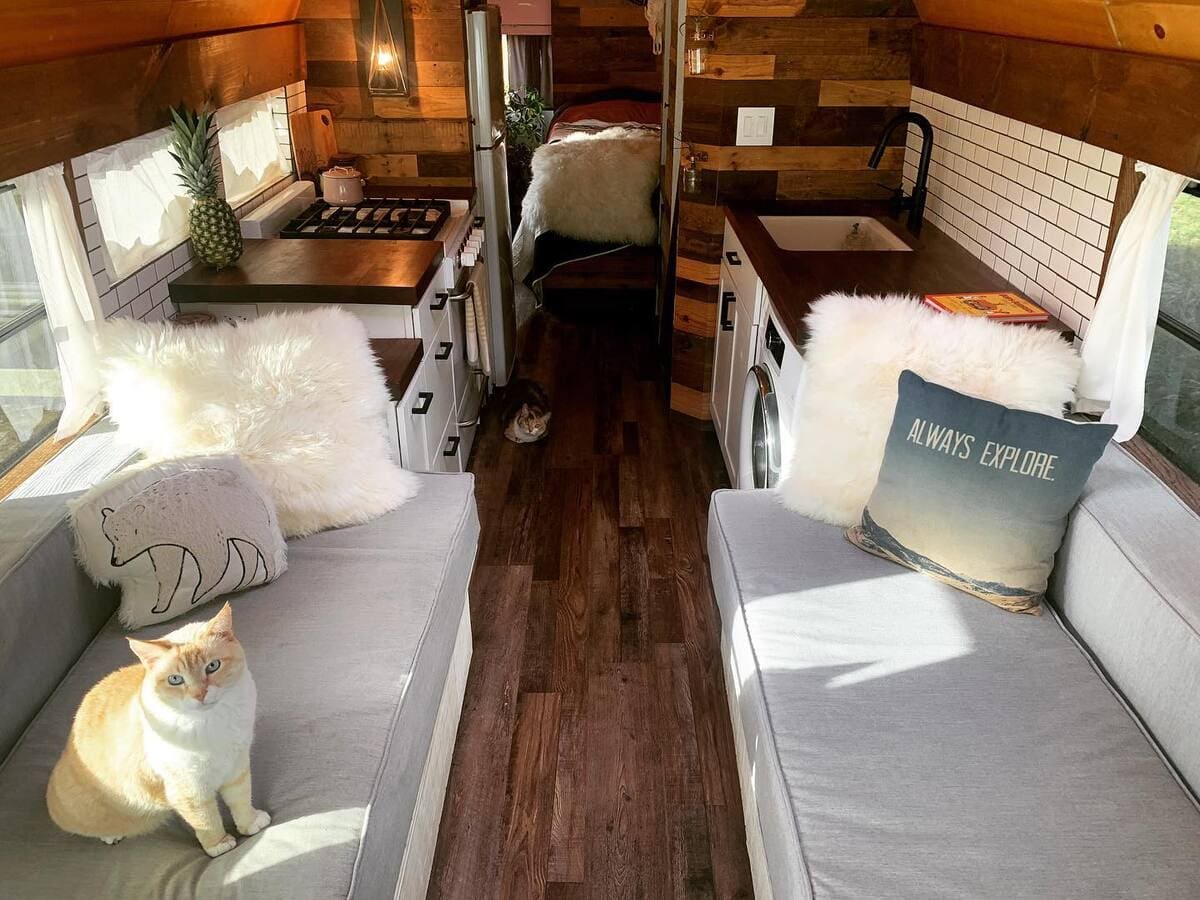 The living room is the heart of the bus and is as comfortable as they come. Holly and Dustin installed comfortable couches on each side of the bus so they could use a table in the middle while eating. They also use the table to play board games and entertain.

The sofas form a full-size bed, which means they have plenty of space for guests who decide to stay the night. There is also extra storage space under the couches, which they use for kitchen essentials. 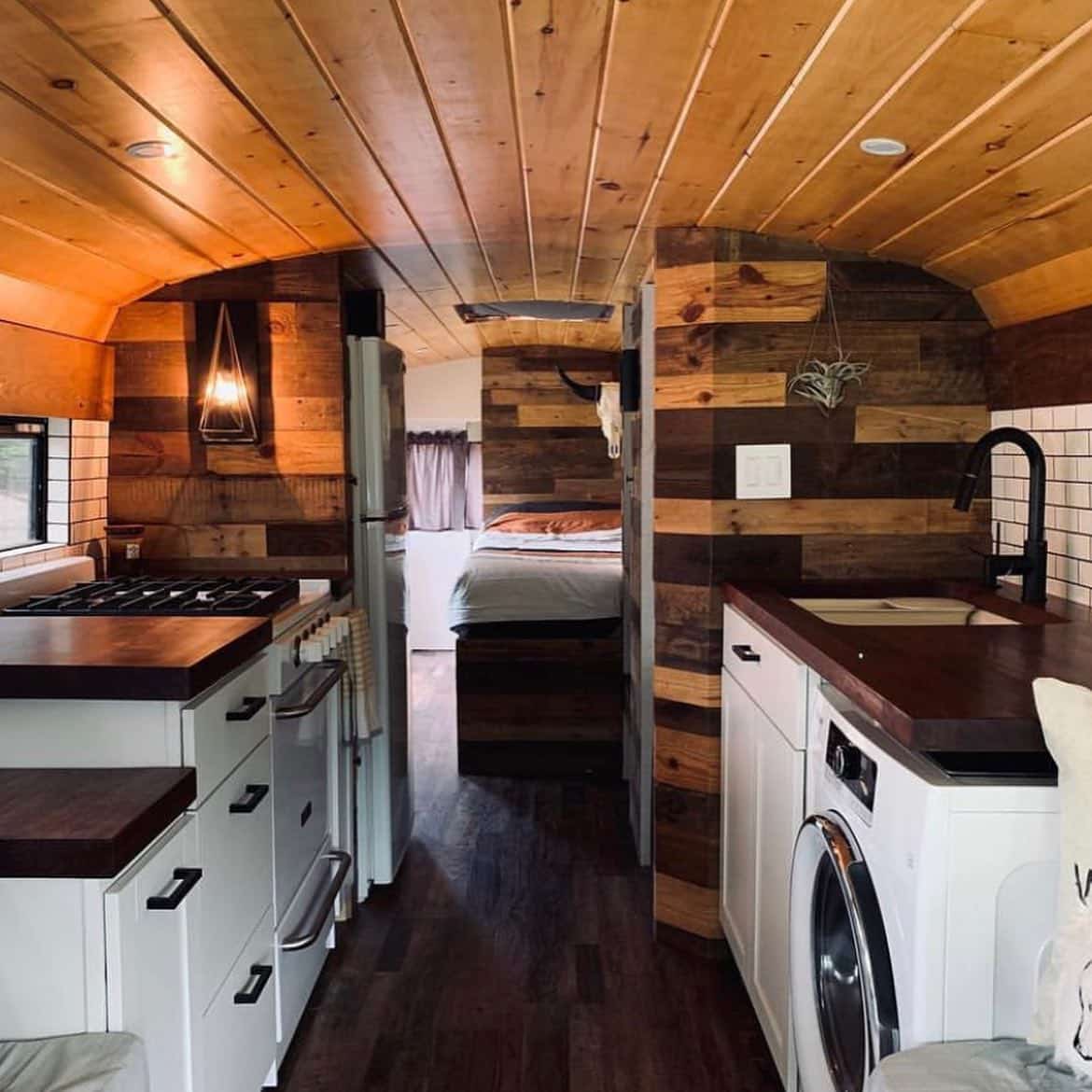 Holly and Dustin built their entire bus around the kitchen. They enjoyed clearing the clutter to enjoy a more simplistic space but kept the tools that helped them prepare high-quality meals, like their enameled Dutch oven for sourdough bread, Japanese steel knives, and a collection of herbs and spices.

The walls in the kitchen are built from recycled pallets, and they have put together the cabinetry to incorporate a washer-dryer combo. They also love their raw walnut slab countertops made by their best friend’s brother. 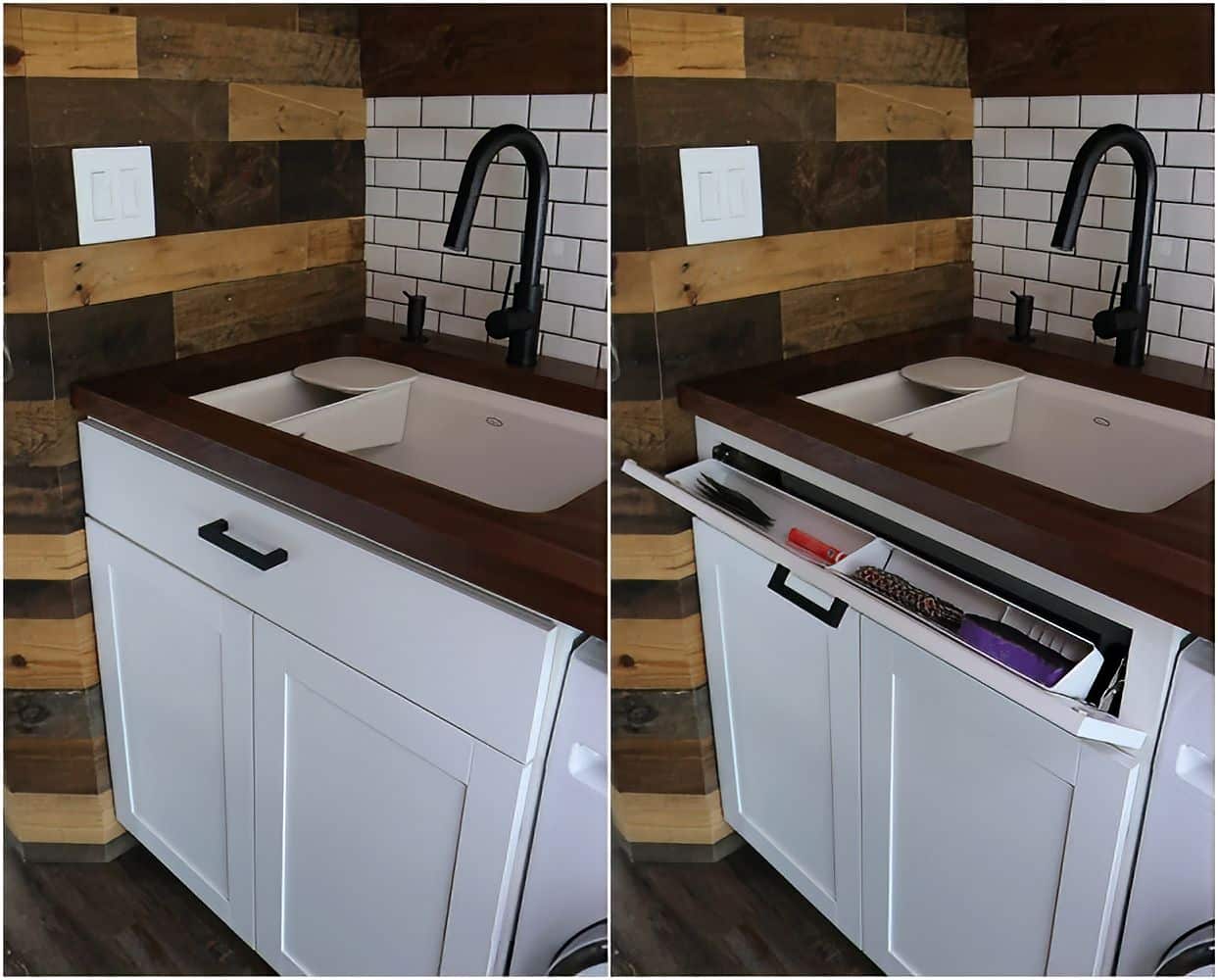 The sink is one of the kitchen’s most practical and helpful features. It’s cast iron and deep, giving them plenty of space to wash pots and pans. Their sink also has a unique tip-out tray, which they use to store their sponges and scrubbers. 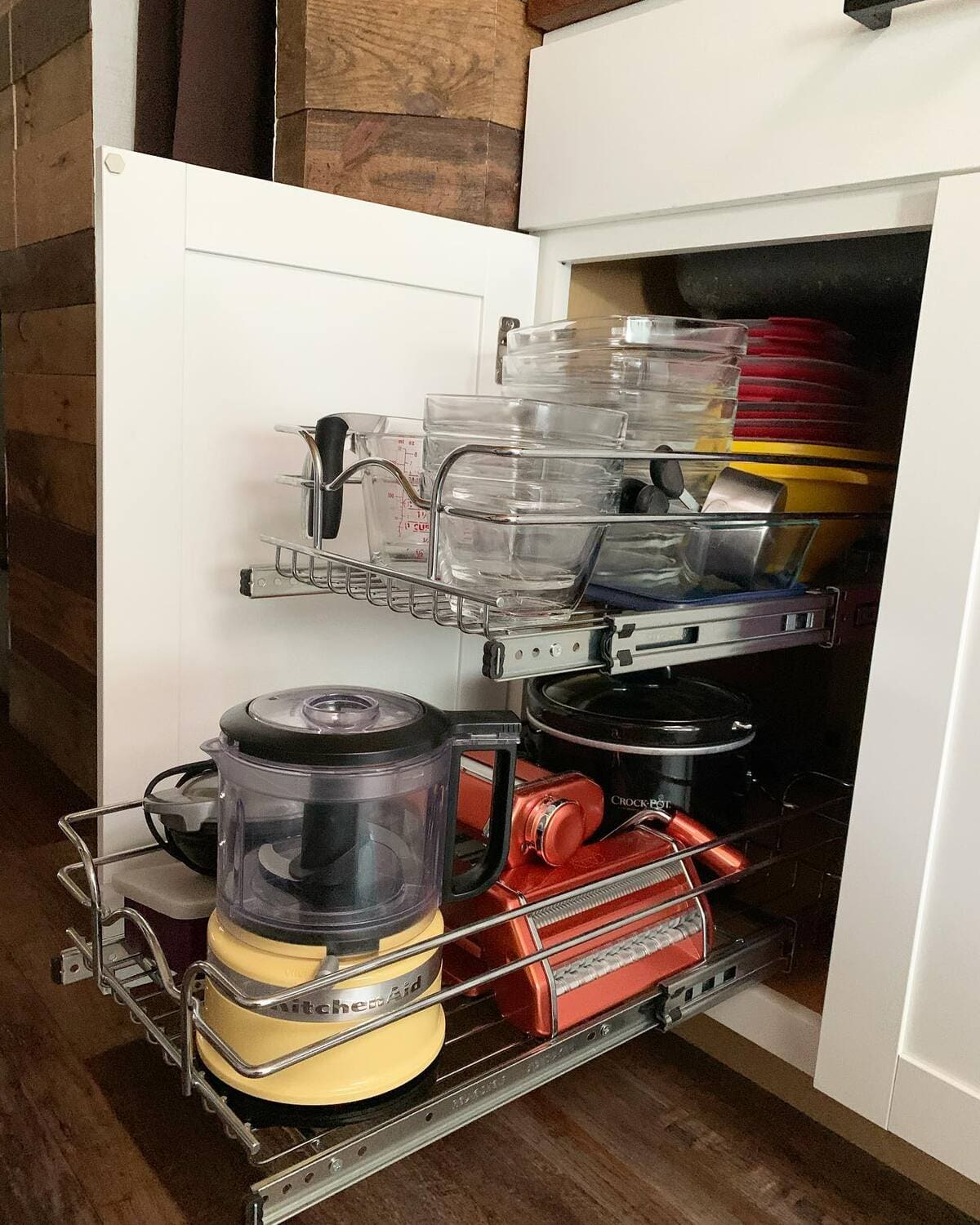 Small living calls for small appliances, and they installed a two-tier pull-out cabinet to house them. There’s plenty of space for their waffle maker, small crockpot, and pasta maker. They also use the cabinet’s top shelf for storage containers, measuring cups, lids, and other essentials. 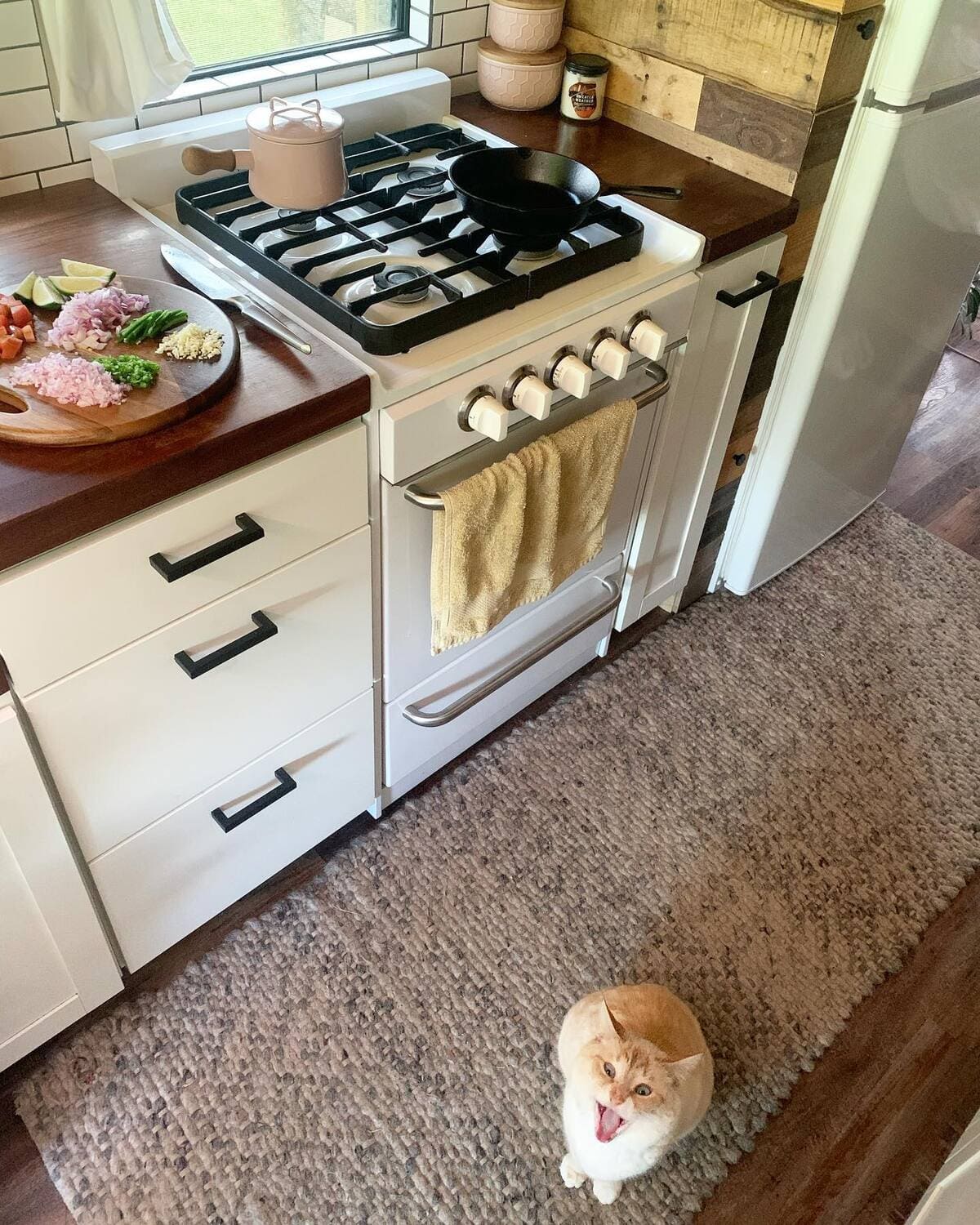 The Sasquatters put a lot of thought into the kitchen appliances they wanted. They wanted a stove that was almost as big as a house stove and found a beautiful white propane stove with cast iron grates and a broiler. They also invested in a 12-volt fridge, which barely uses any power. 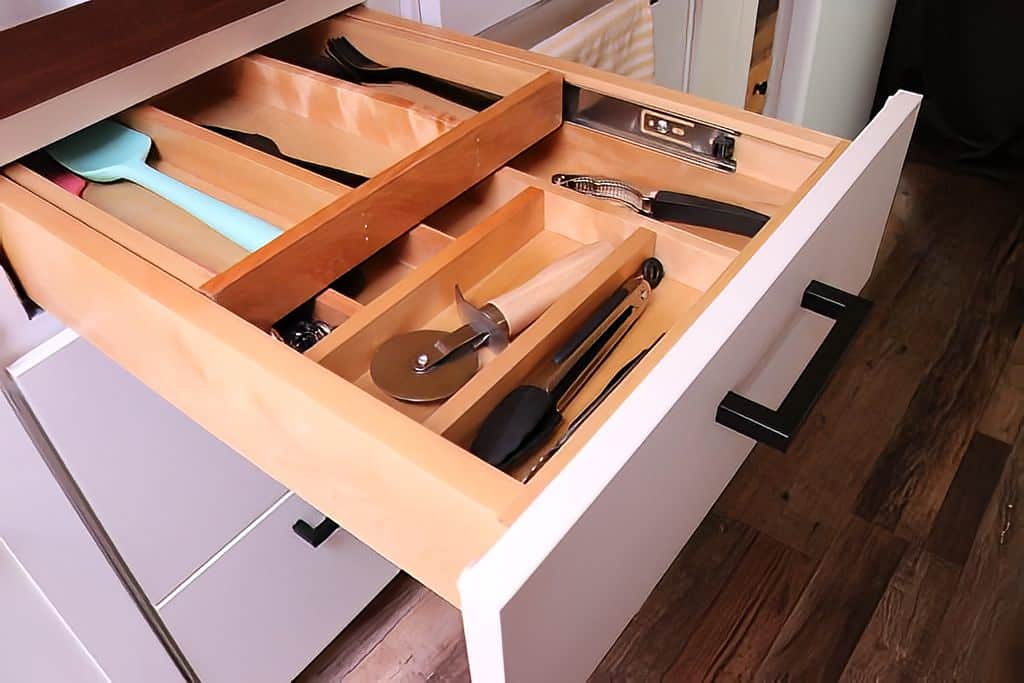 You have to do more with less in a house bus. Holly and Dustin combined two utensil drawers into one by purchasing a tiered cutlery and combination drawer. Now they can access all utensils in one place. 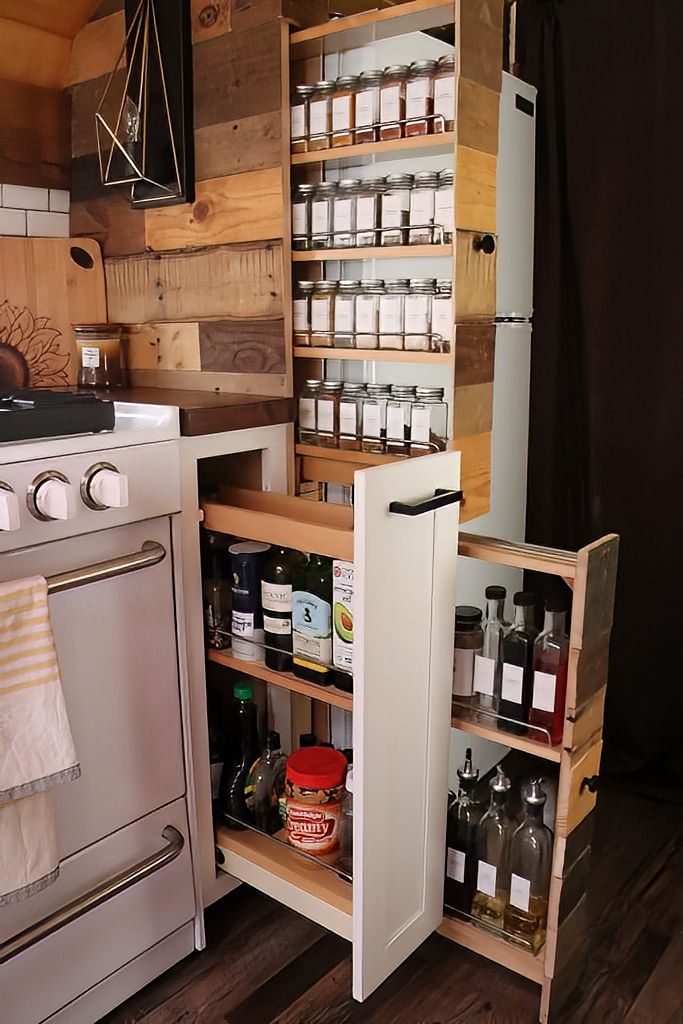 With a massive collection of spices, Holly and Dustin knew they needed to get creative with storage. Initially, they purchased a three-inch base cabinet pull-out but realised they also needed a five-inch model to store their spices, dressings, syrup, honey, and peanut butter. These all blend in with the décor and keep their clutter out of sight. 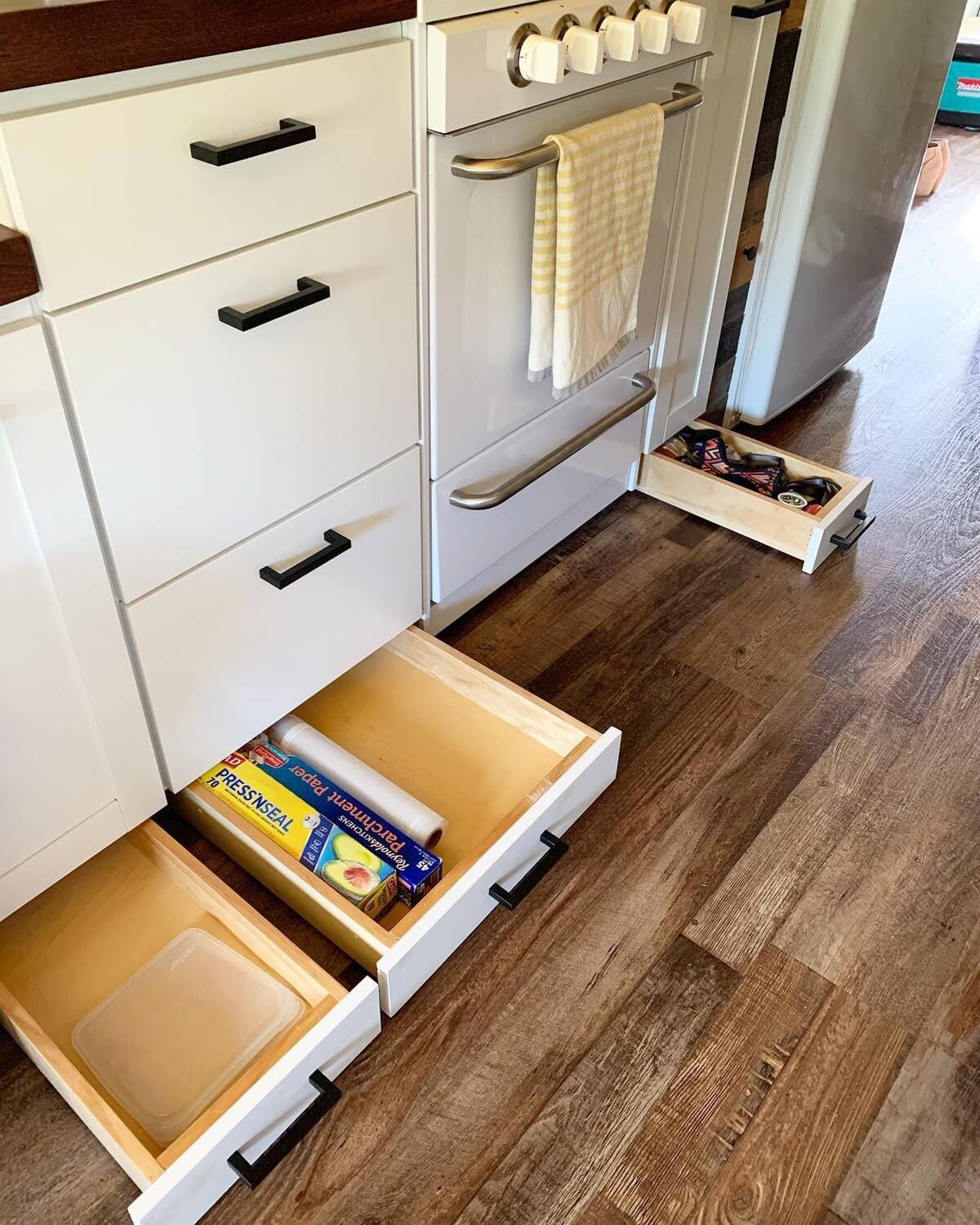 Most kitchen cabinetry doesn’t include storage in the toe kicker space, but Dustin and Holly’s cabinetry does. They turned these areas into storage for small things they don’t have room for elsewhere. 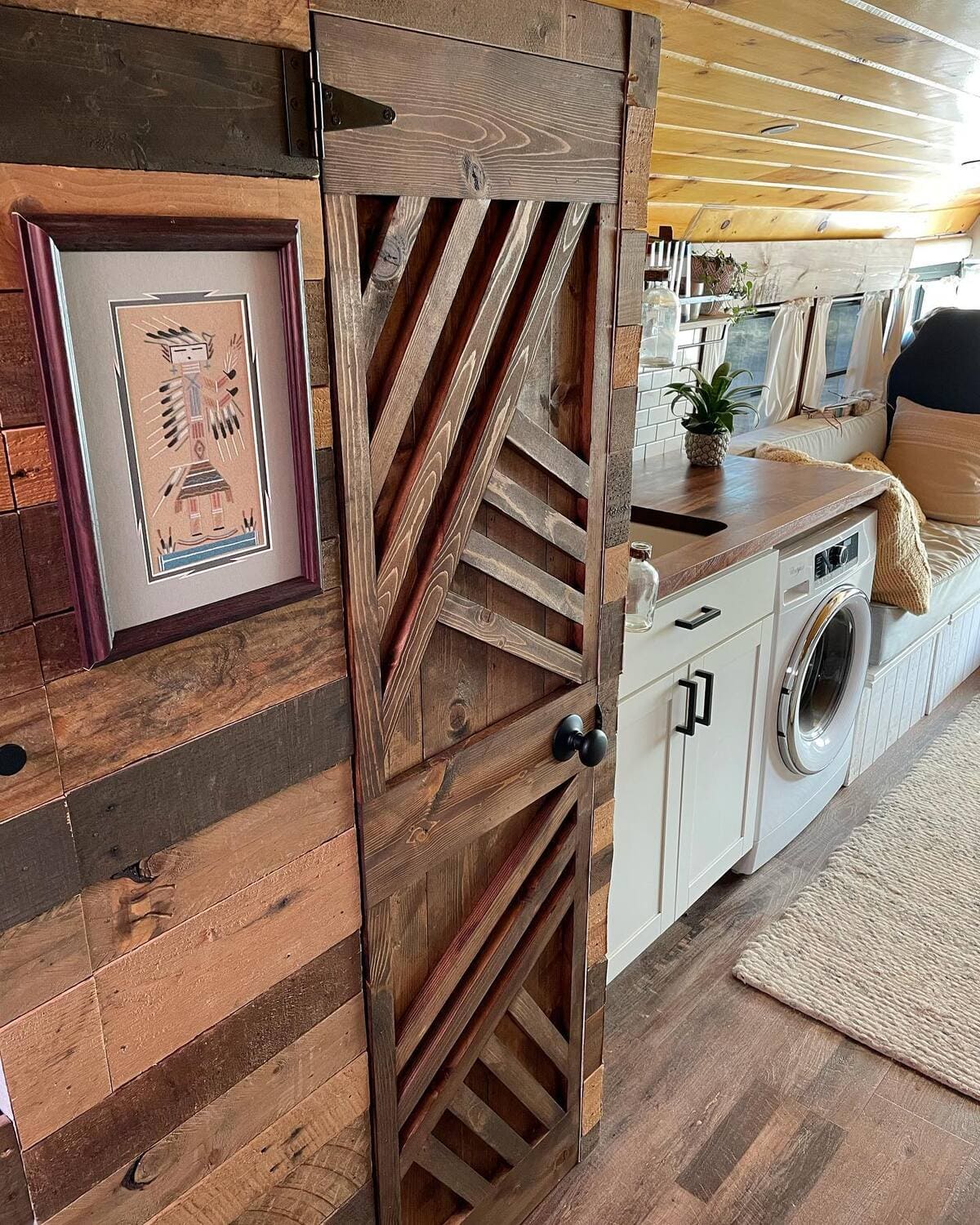 Holly and Dustin initially used a curtain for privacy between their living area and the bathroom, but it wouldn’t cut it forever. Eventually, they made a unique door that perfectly fits into the home’s rustic design. 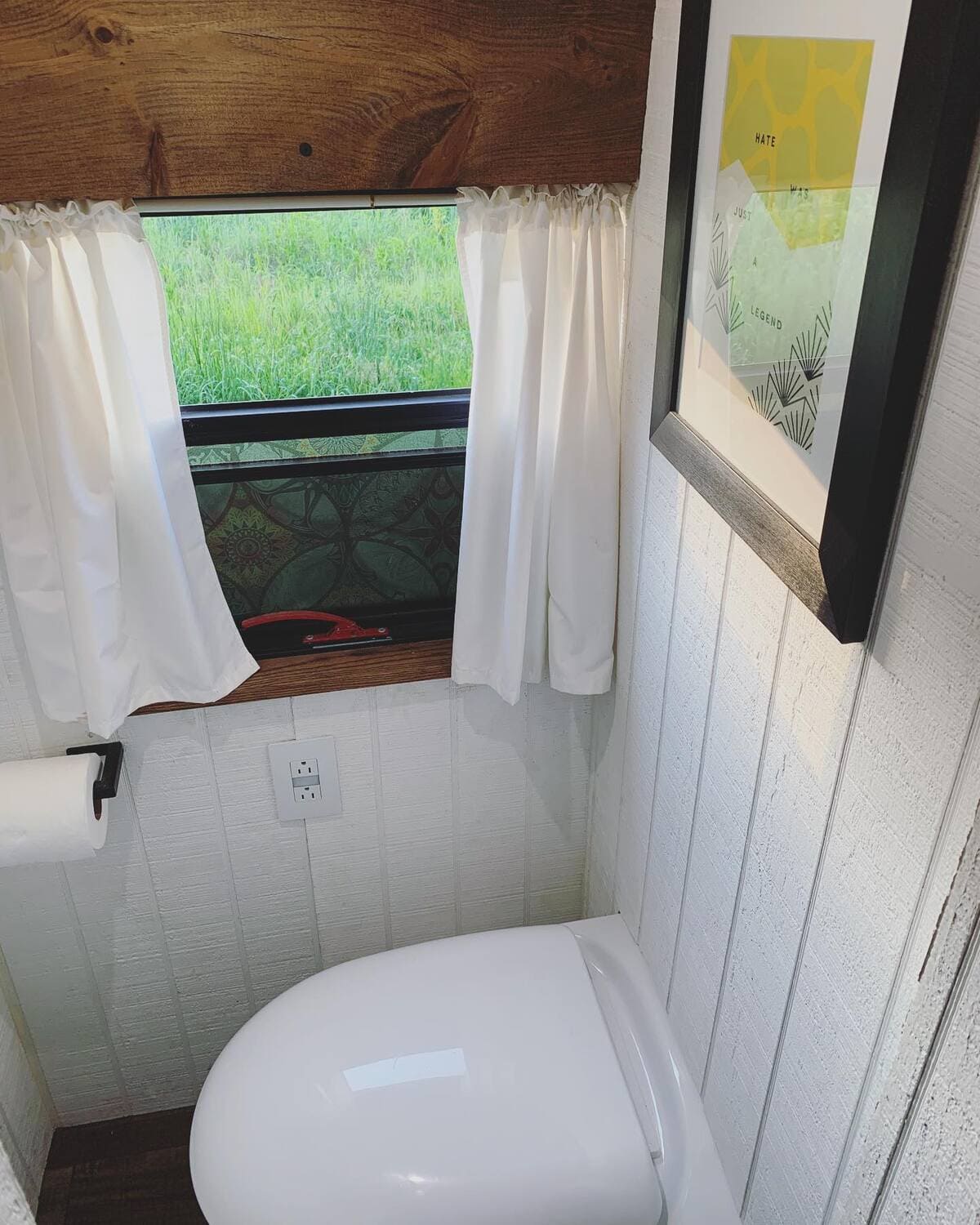 Holly and Dustin’s bus is only 27 feet long, so they didn’t have room for an indoor shower. Their small bathroom has a composting toilet and a window for ventilation. When they need to shower, they set up their outdoor shower. 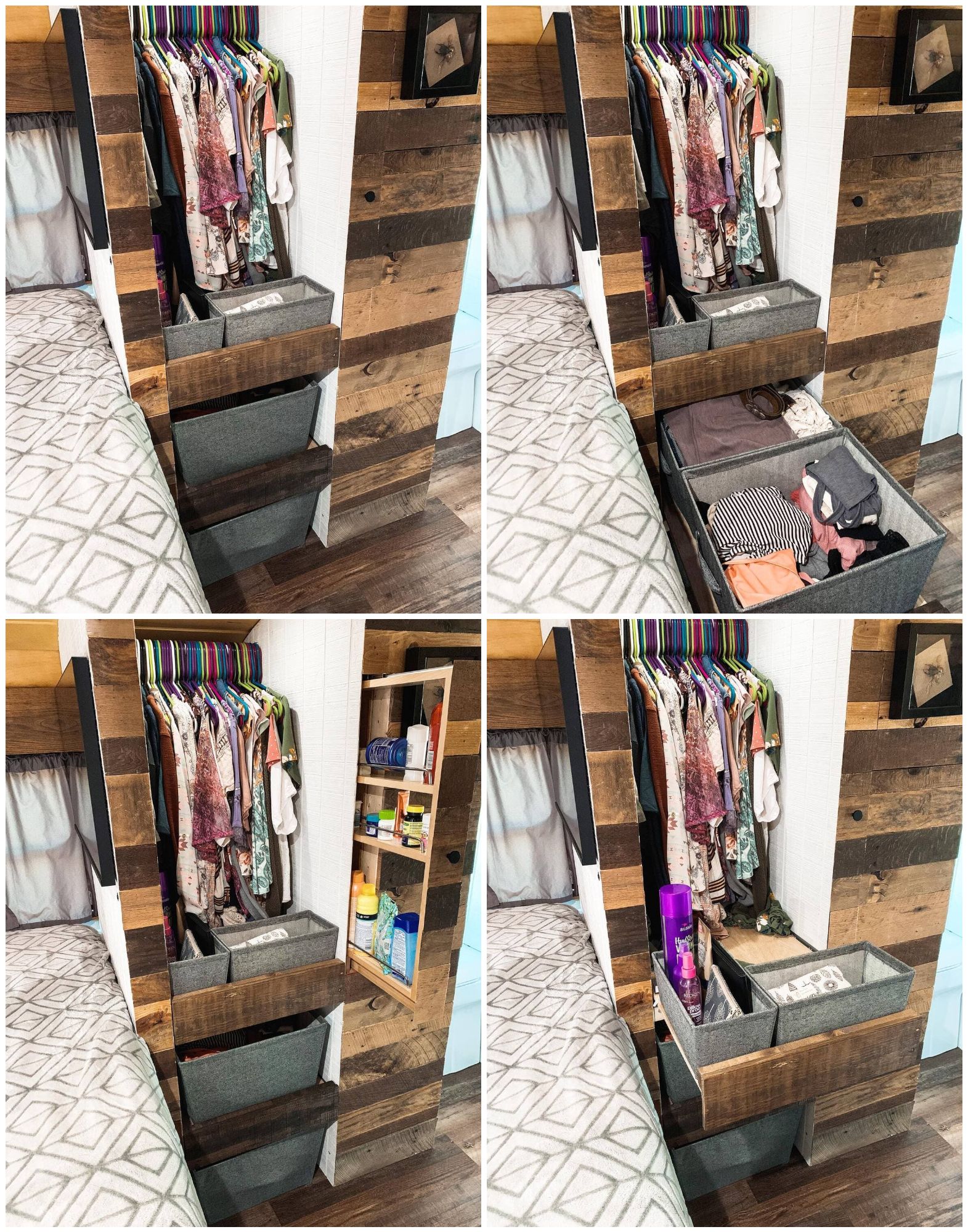 Holly and Dustin sacrificed an indoor shower to have a closet area. While there isn’t much space for Dustin’s clothing, he stores most of his under the bed in the bedroom. 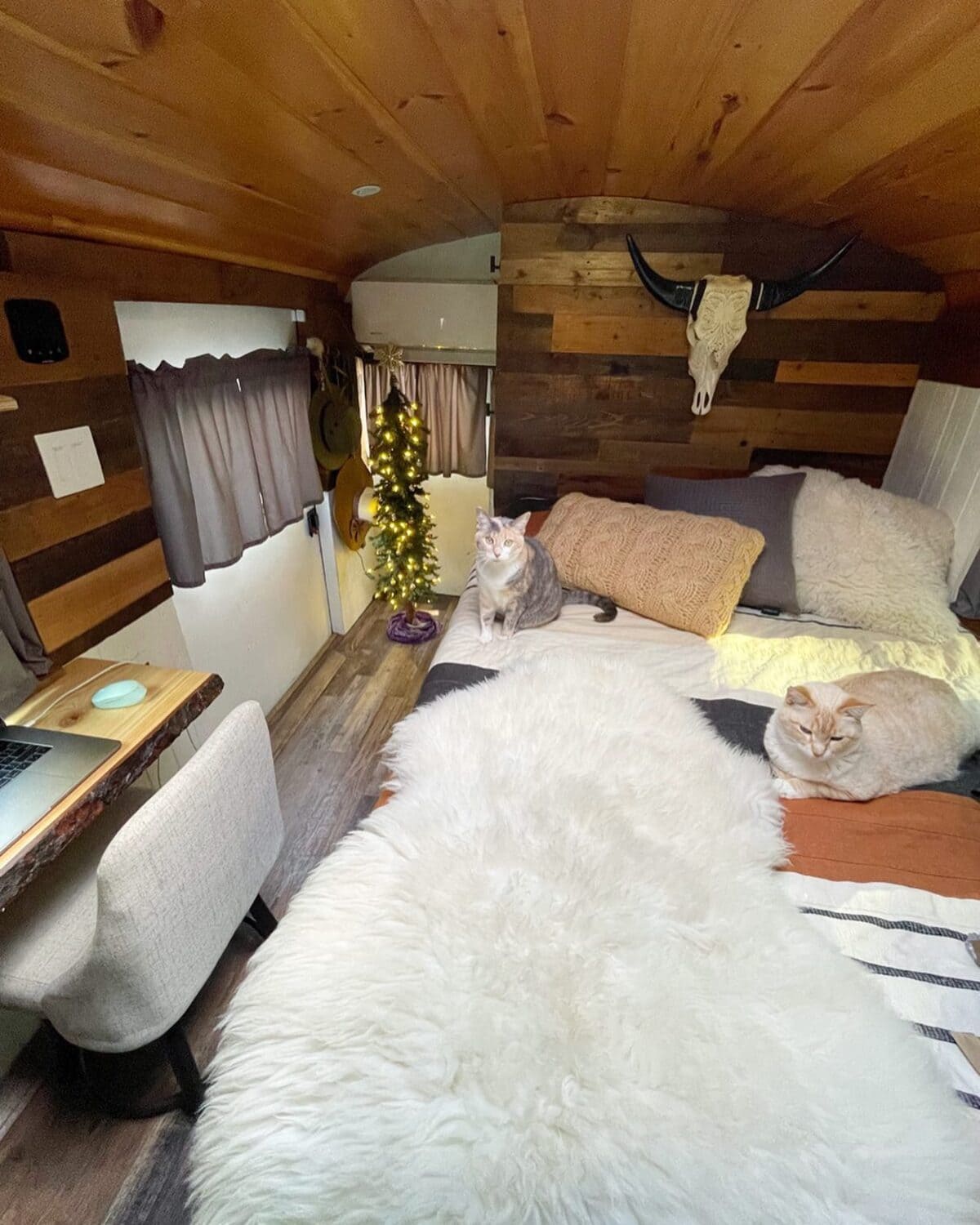 The bedroom is a luxurious and private nook at the bus’s rear with plenty of space for Dustin, Holly, their two cats, and a full-size bed.

The bed also features underneath storage, which they use for clothing, water tanks, batteries, and everything else they couldn’t find a home for. Holly’s favorite part of the bedroom is the engraved skull lamp. 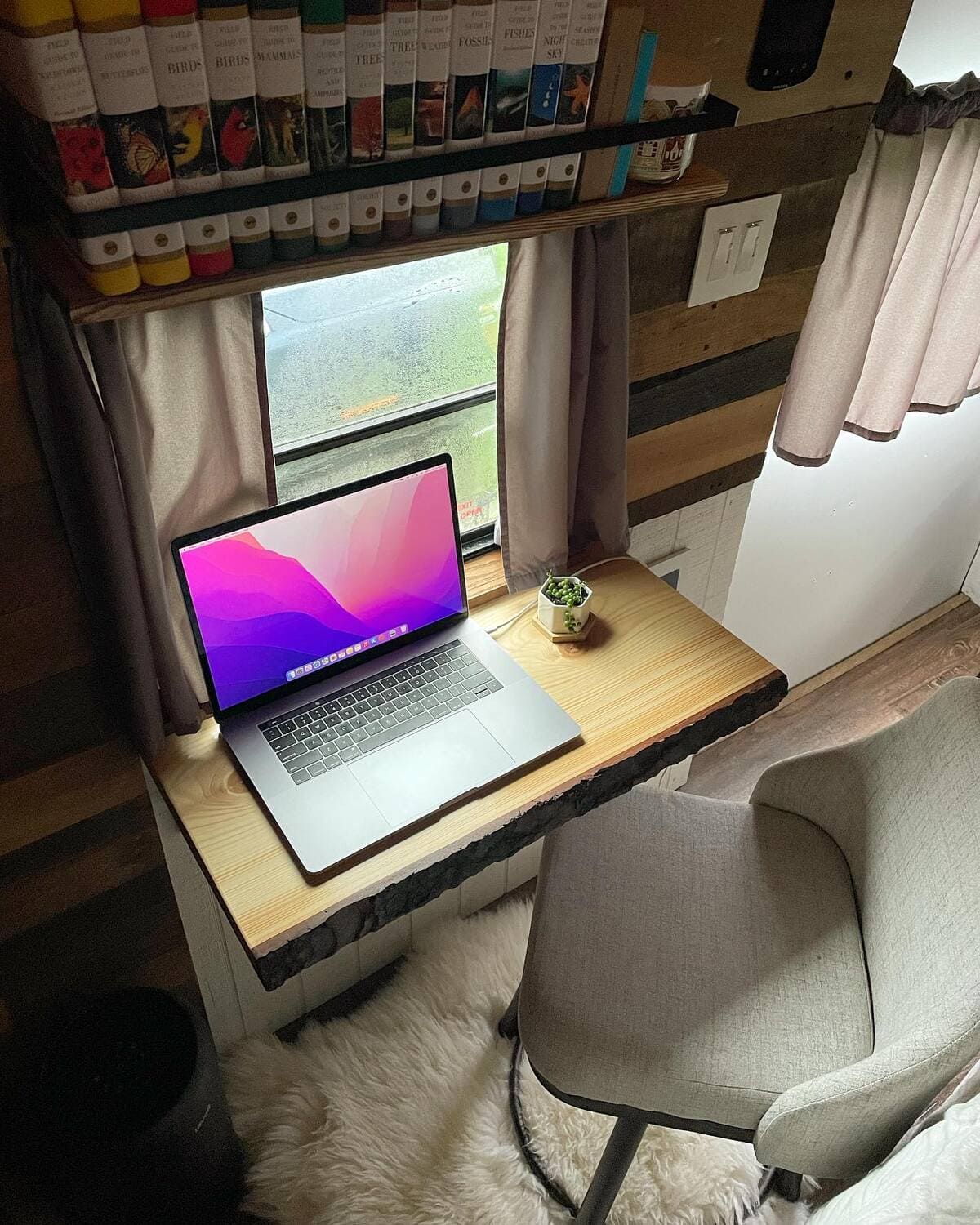 The bus might be small and compact, but it even has an office nook. Dustin built a desk out of live-edge wood with plenty of space for a laptop computer. There is also a bookcase for their collection of Audubon books. 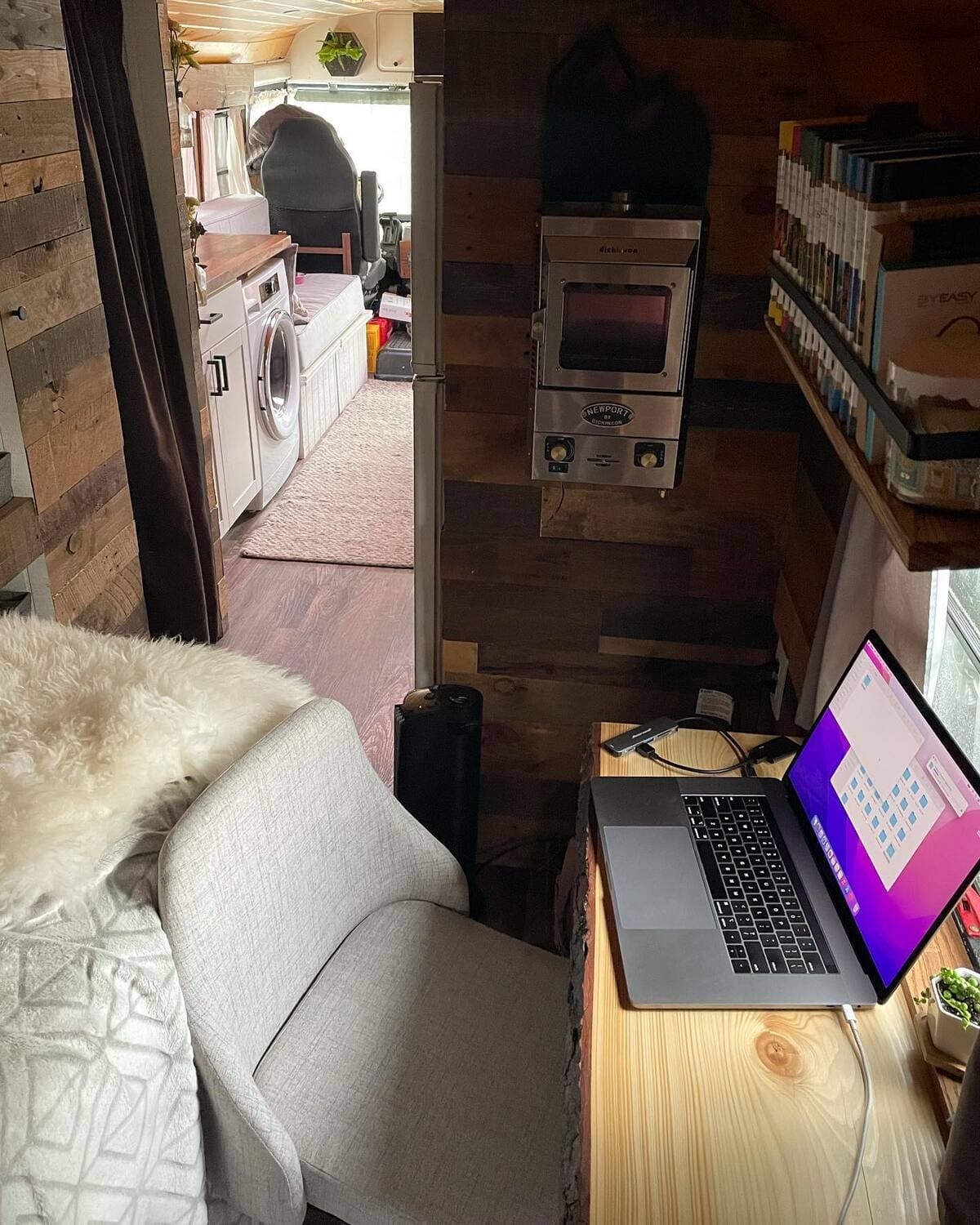 It can be challenging to control a bus’s temperature, but Dustin and Holly have mastered it. They have a mini split for heat and a Dickinson marine 12,000 BTU propane heater to heat the bus quickly. They also installed an air purifier as parking in desert environments means there can be a lot of dust blowing around their bus.