When the Pandemic Turned Her World Upside Down, Emily Took Up Vanlife. It Didn’t Go Entirely to Plan

Canadian woman Emily never imagined herself living in a van. In fact, she was living in Sydney, Australia, in a beautiful spot by the beach, working full-time in event planning with no interest or experience in camping whatsoever.

But when the COVID-19 pandemic ravaged the world, Emily’s entire world was turned upside down. She decided to resign from her job and book a one-way ticket back home to Canada with no idea what to do next.

Upon arriving back in Canada after living in Australia for over seven years, Emily had no home, no jobs, and no plans. So, instead of renting an apartment and buying a car, she purchased a vehicle that she could turn into an apartment instead.

At that time, Emily didn’t even enjoy camping and had only been on one campervan trip, but the idea of traveling across Canada full-time suddenly appealed. 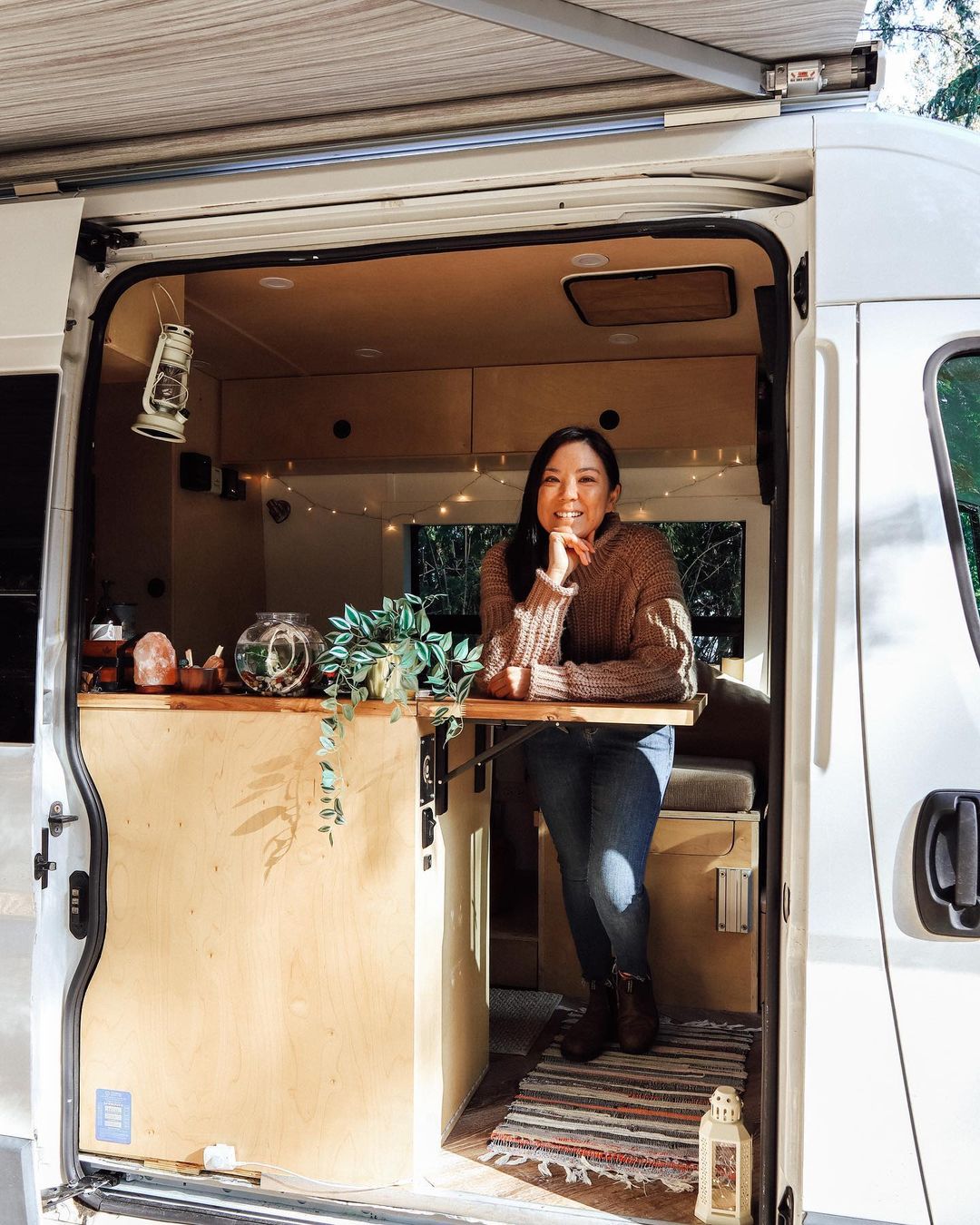 Before long, she had purchased a 2014 EcoDiesel Ram ProMaster 2500 with 72 square feet of space and set about turning it into a house on wheels. To say it didn’t go to plan was an understatement. A builder created a shell for her to work from in the van, and she spent hours in near-freezing temperatures painting, varnishing, and transforming the van into a liveable space.

However, that’s when the mechanical problems began. Several visits to the mechanic and thousands of dollars later, she was finally camping-ready. While she waits to get her cross-country trip underway, Emily stays in her van in parking lots and residential areas and checks into campsites to shower and take care of her van’s water needs. 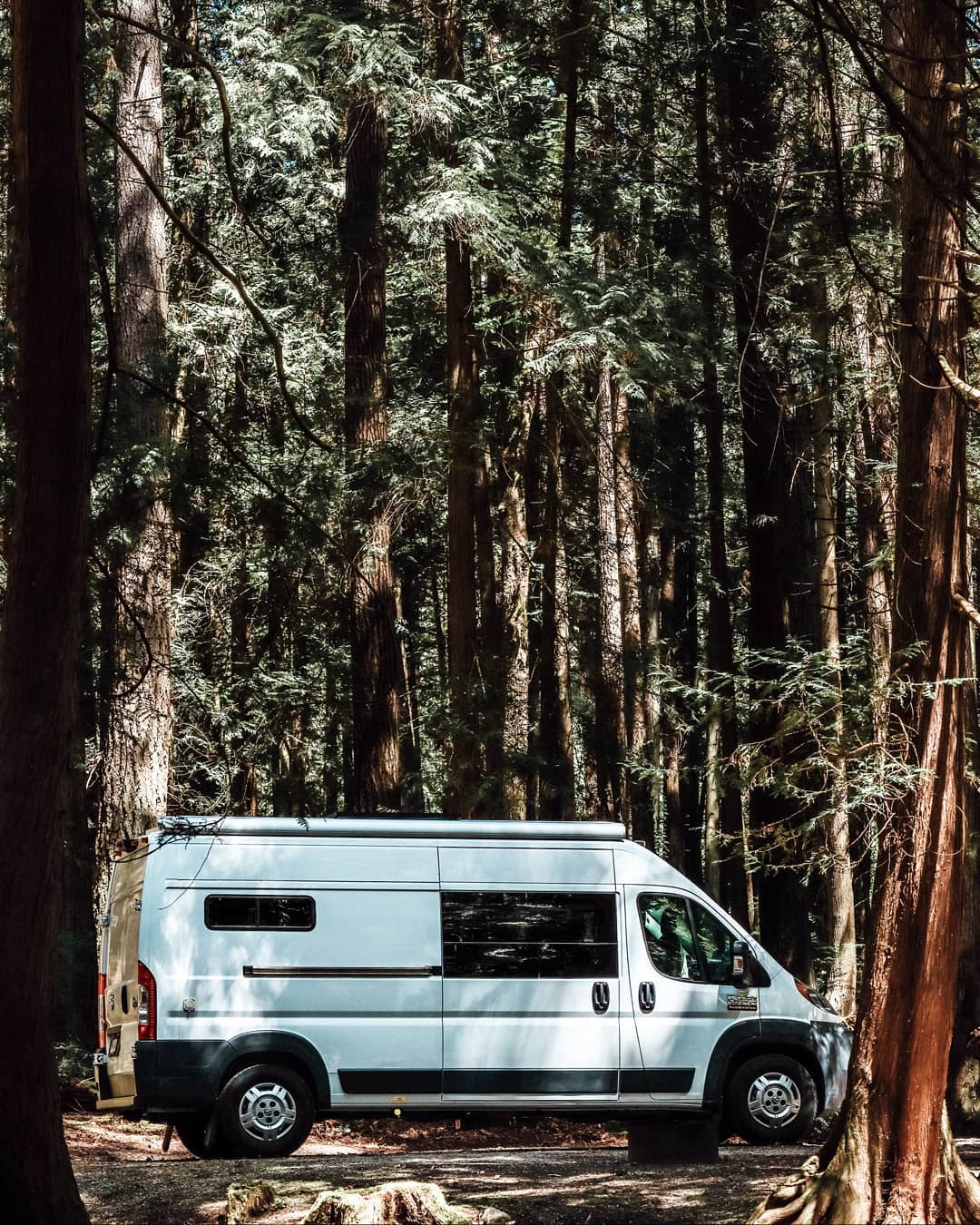 Emily moved back to Canada from Australia at the start of the COVID-19 pandemic. She then purchased a 2014 EcoDiesel Ram ProMaster 2500 that she converted into a house on wheels with 72 square feet of space. Windows were her priority during the conversion, so she had 3 windows installed: two full-size ones at the front and one bunk slider at the back. These windows provide light and airflow. 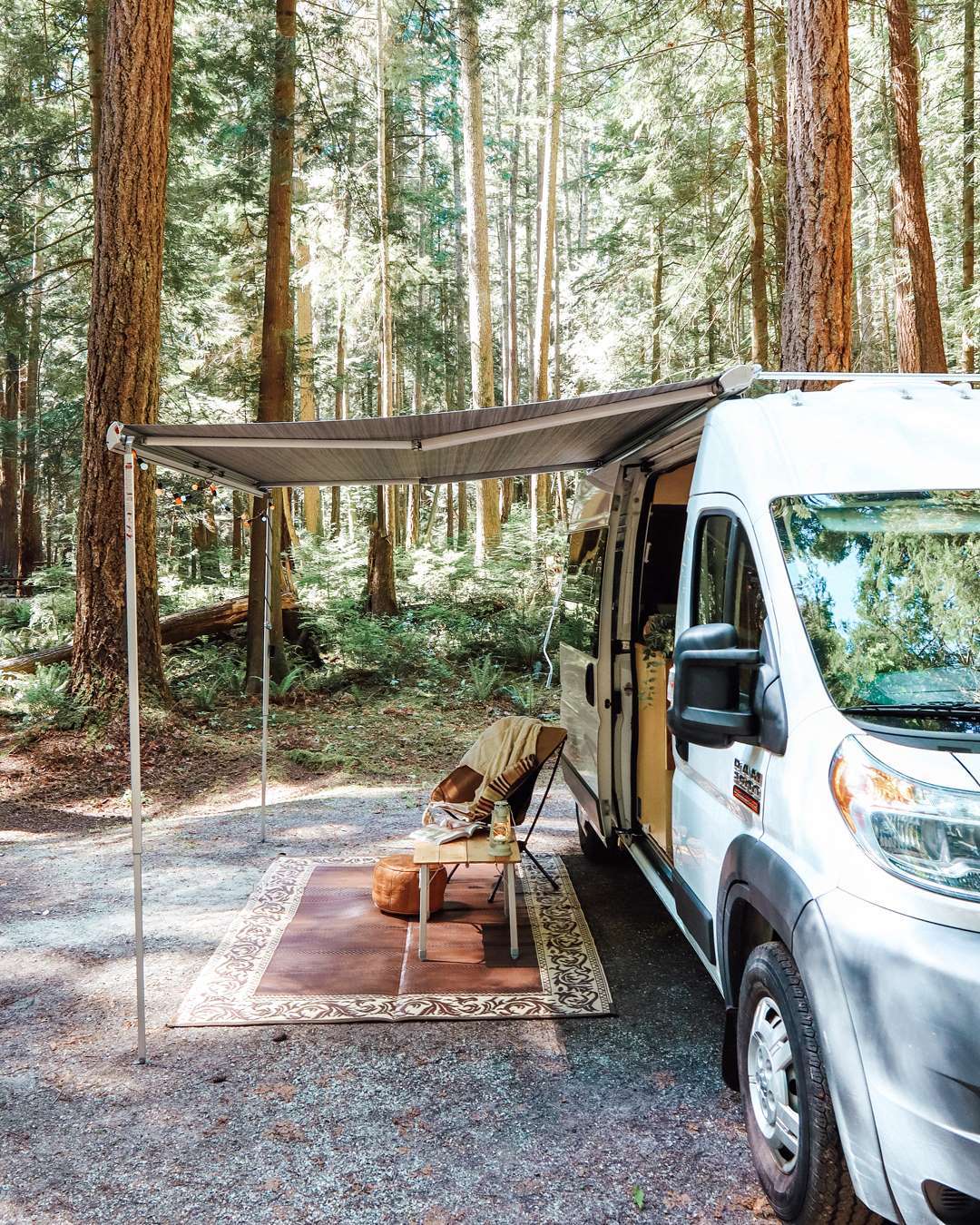 Mindful of not wanting to create more holes in the roof of her van, Emily purchased a Fiamma roof rack system that worked with her ProMaster’s hardware. On it, she installed a 300-watt solar panel and connected an awning for shelter. 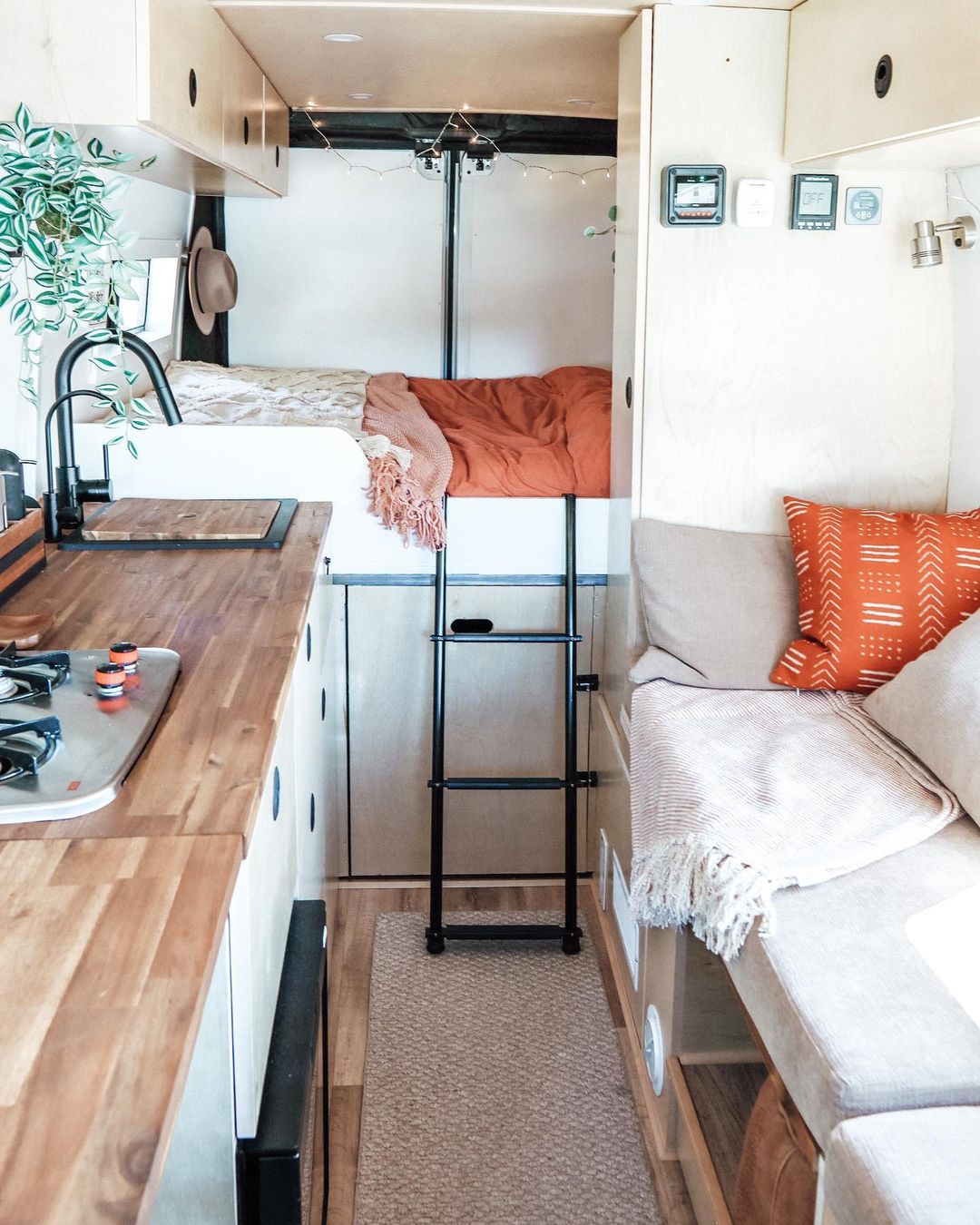 Emily wanted a raised, permanent bed in her van that she didn’t need to tear down daily. This was installed to the rear of the van, and she cut down a bunk ladder for easy access to it. 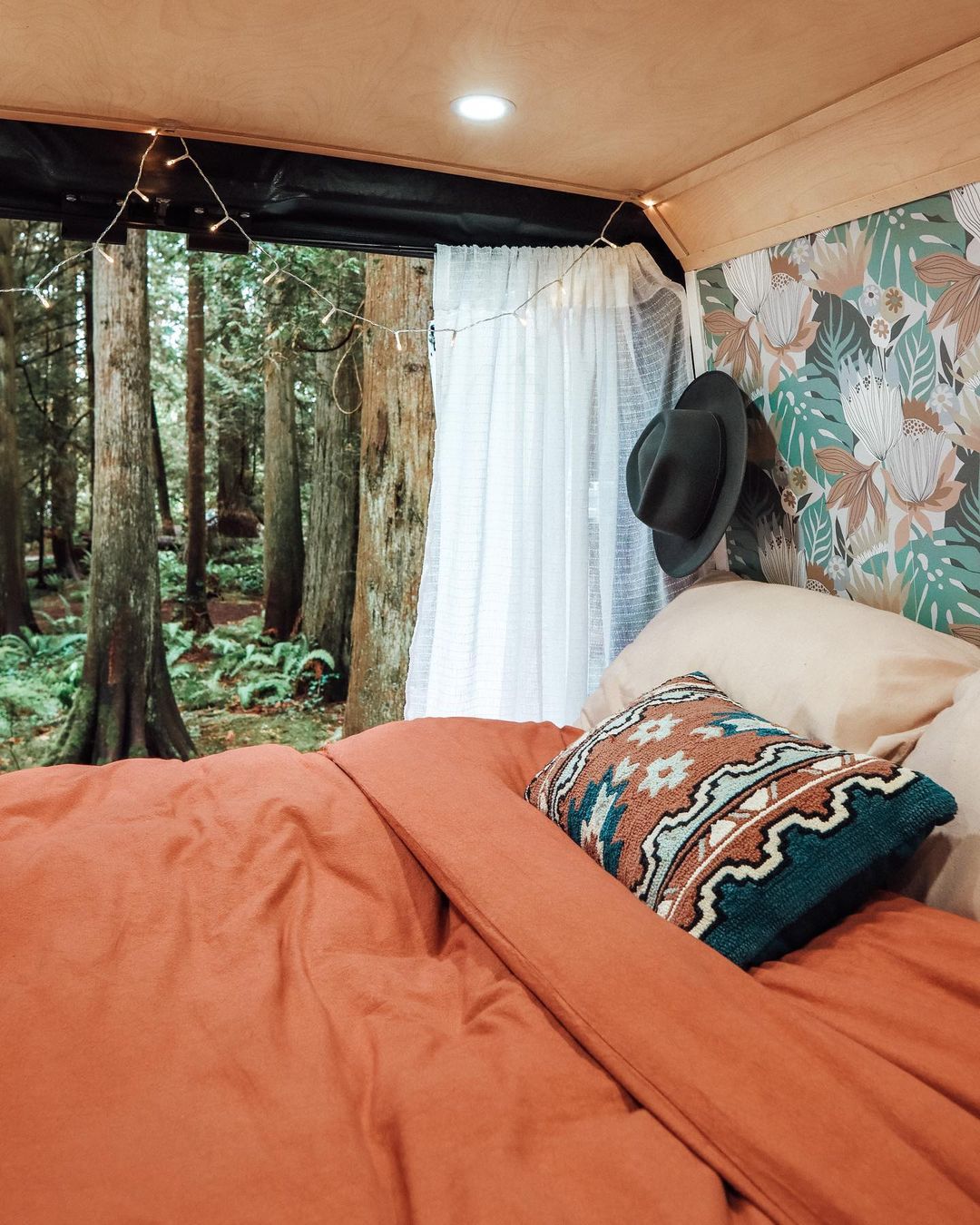 The bedroom area of Emily’s van takes up 40 percent of the space, and she describes it as her retreat. She can soak up the views from the large window and enjoy the warming colors around her. She also factored the height into the build so that the bedroom space would cater for her six-inch foam mattress and gave her the ability to sit up straight in bed, and have a bun in her hair! 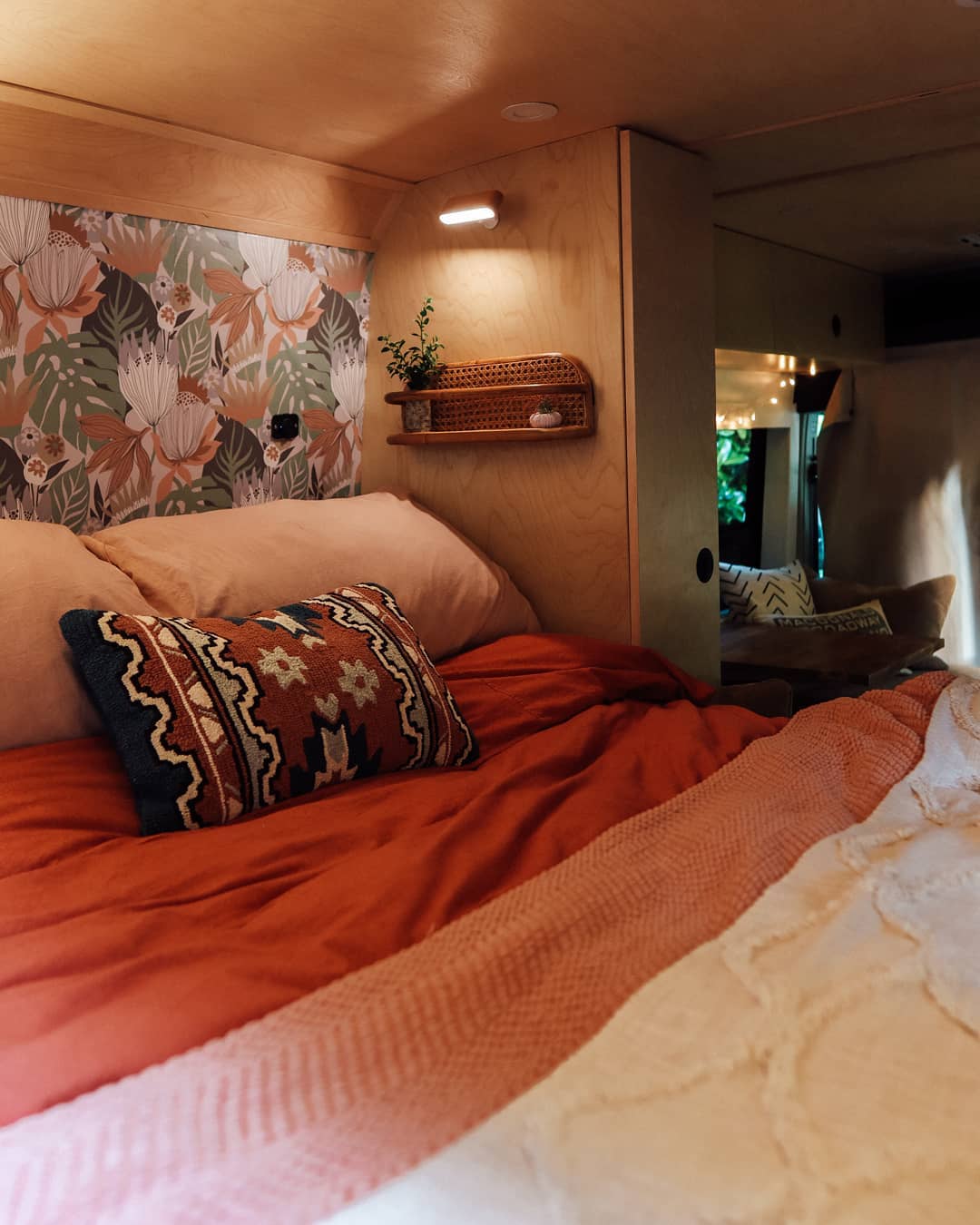 Rarely do you see wallpaper in vans, but Emily decided to buck the trend. She spotted the print at RoomMates Decor and fell in love. She adored the warmth and floral boho styling and installed it as a feature wall above her bed. Emily also installed a shelf for convenience and adored the secret cubby house vibes her bedroom space offers. 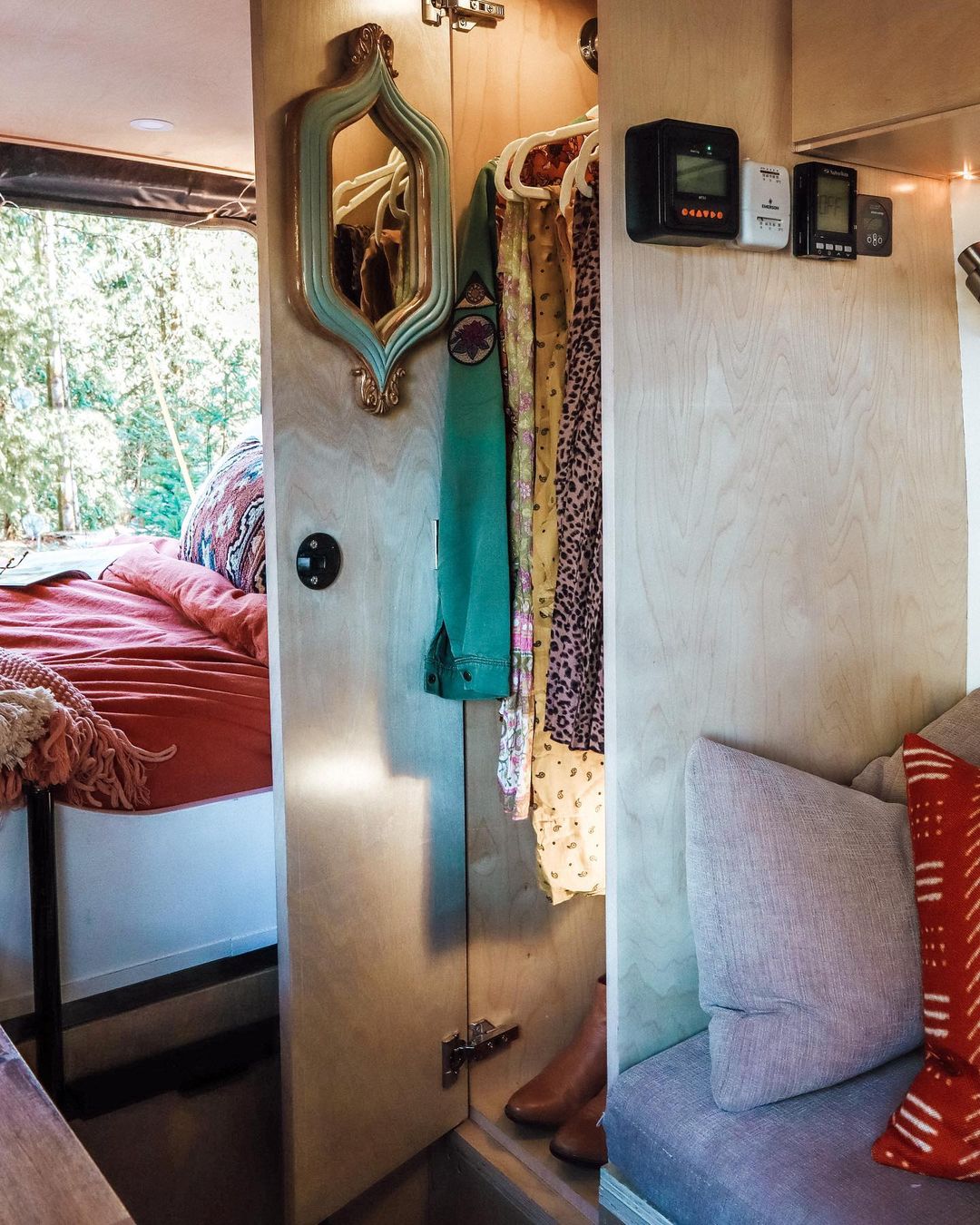 A non-negotiable feature during the building process was a closet. This was where Emily planned to store all her beautiful dresses purchased in Australia. However, she quickly realized that living in Canada meant it would be taken over by winter coats and mittens instead. 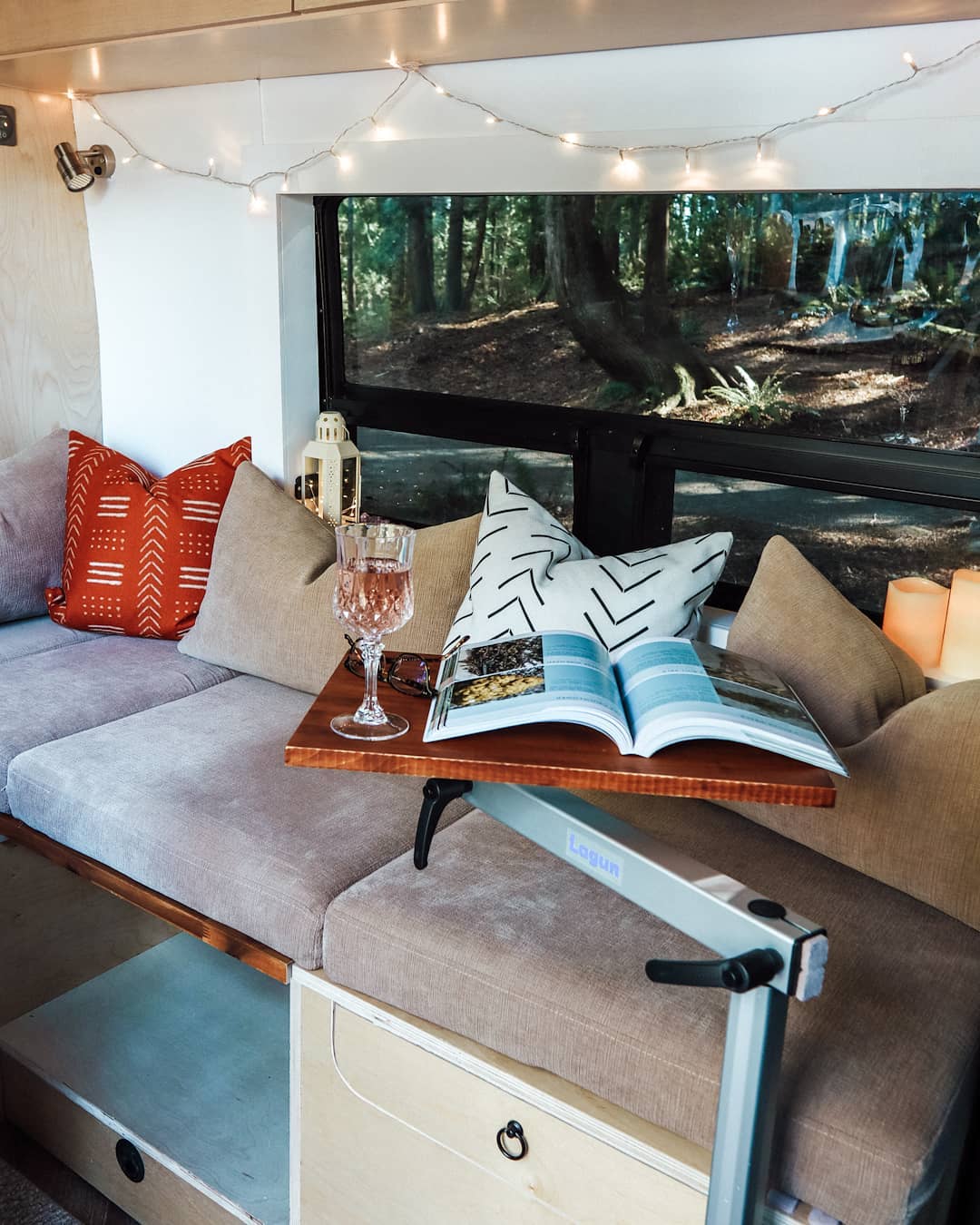 The main living space of the van is a versatile and functional area where Emily spends most of her time. The lounging area features a six-foot-long couch with high-density cushions, which functions as a lounging area and a guest bed.

There is also a dining space for two, two hidden lockable storage areas, a hidden heater and water heater, and two table locations. She even has a hidden Nature’s Head toilet. 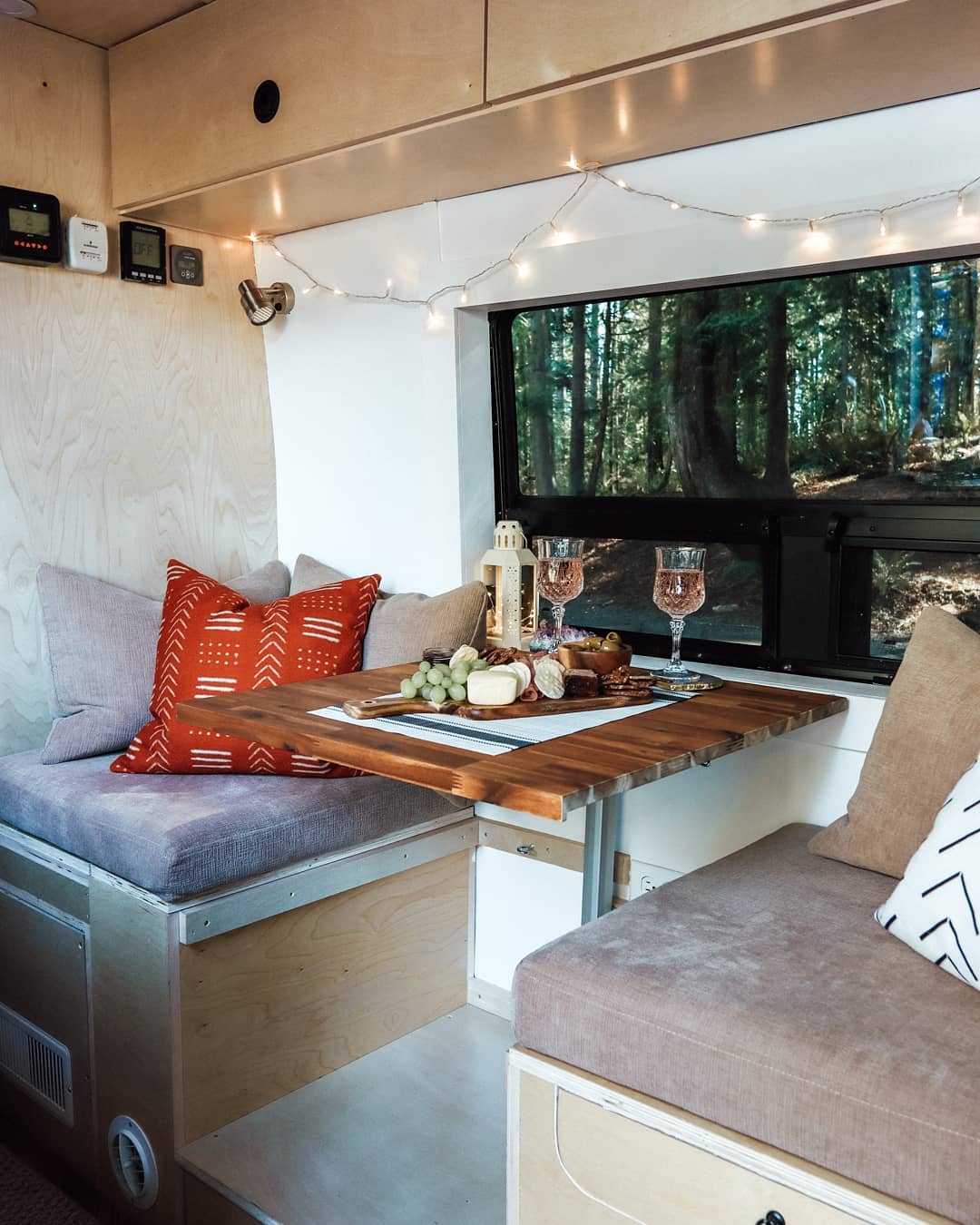 The dining space is as practical as they come in such a conservative space. There are two mounting locations and table tops, one to function as a coffee table and one as a tabletop for dining. There are also two upper cabinets over the dining area for convenient storage. 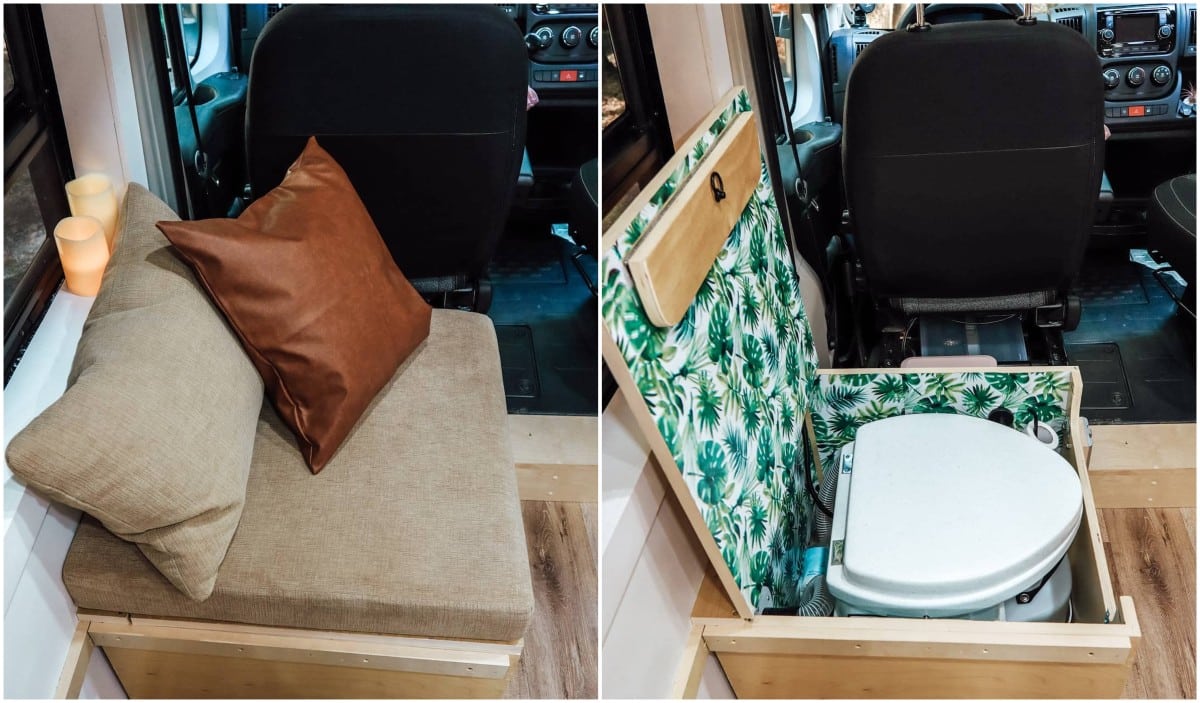 It was important for Emily to have a toilet in her van, so she designed her couch and dining space around it. The toilet is housed in a bench seat, which is hidden out of sight with a foam cushion on top. Underneath the toilet is a drawer with a lockable latch. She also decorated the toilet space with drawer liner contact paper she picked up for under $7. 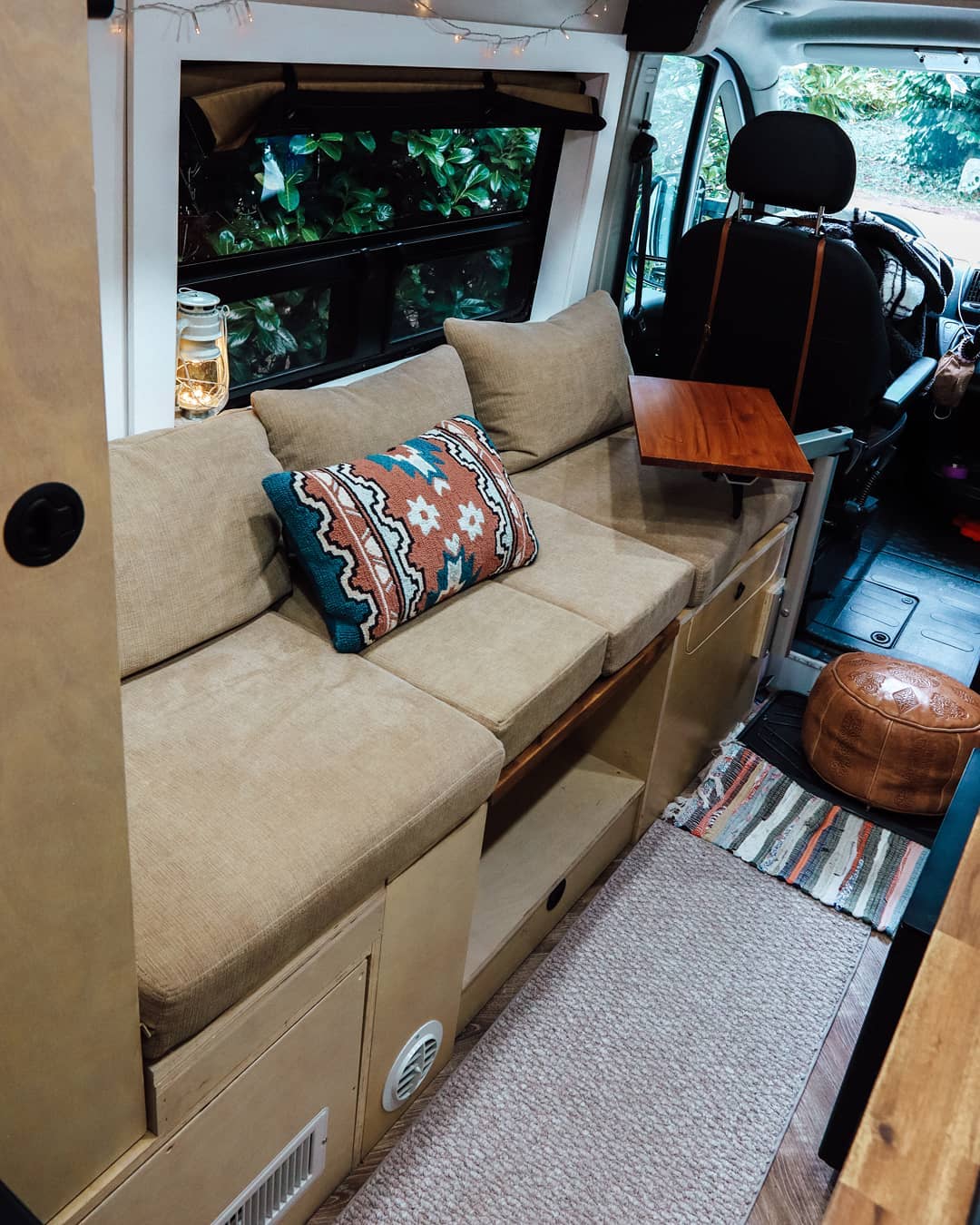 A feature piece in the living space is a beautiful pouf purchased in Morocco. This is where Emily stores her extra blankets. 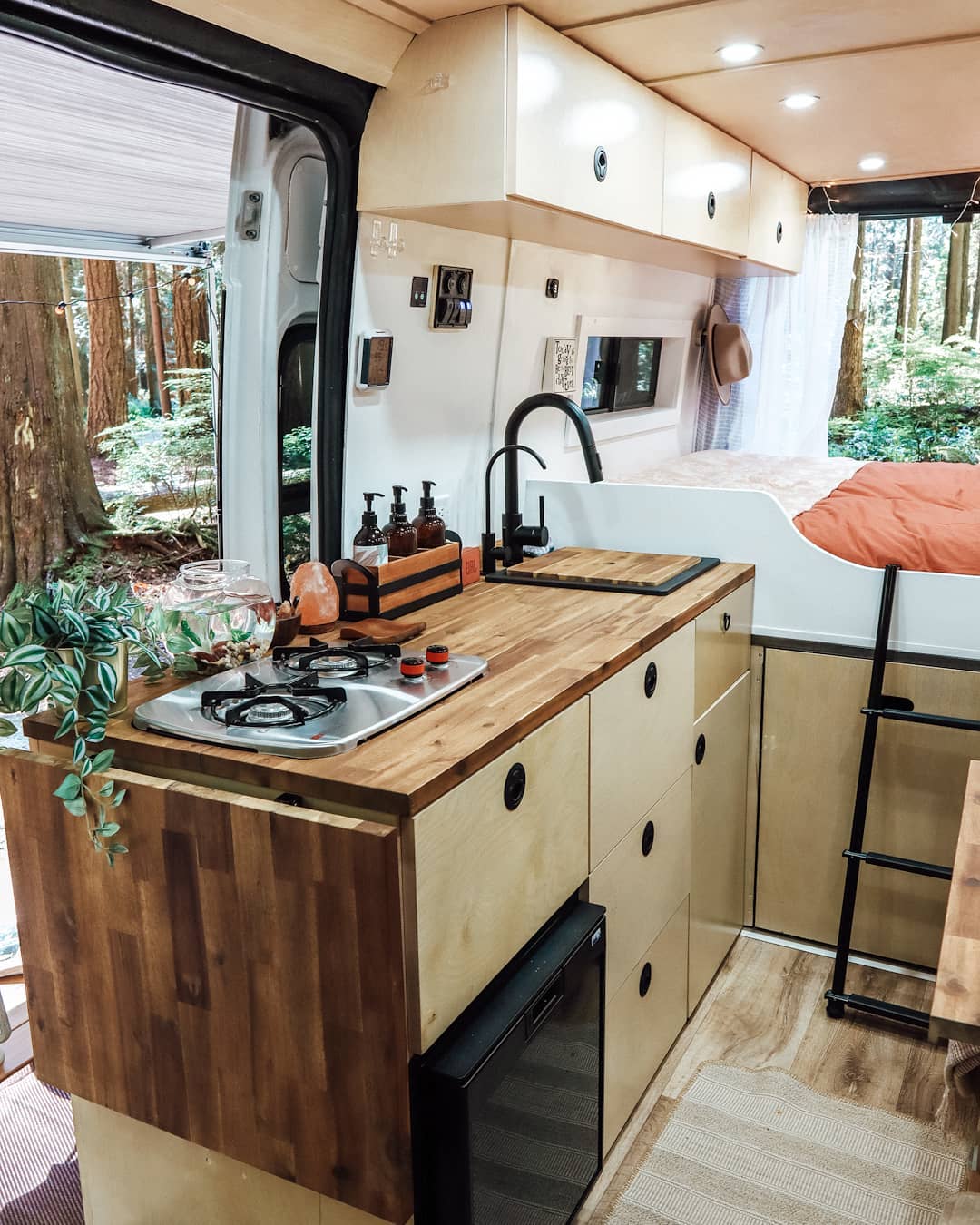 Half the doorway to the outside of the van is taken up by Emily’s kitchen. It has everything she needs to prepare meals, including a sink, water filter, fridge, and two-burner stove. However, if there’s one thing Emily doesn’t like, it’s the drawers. She said they were too big and wishes they were half the size so that she could have more of them. 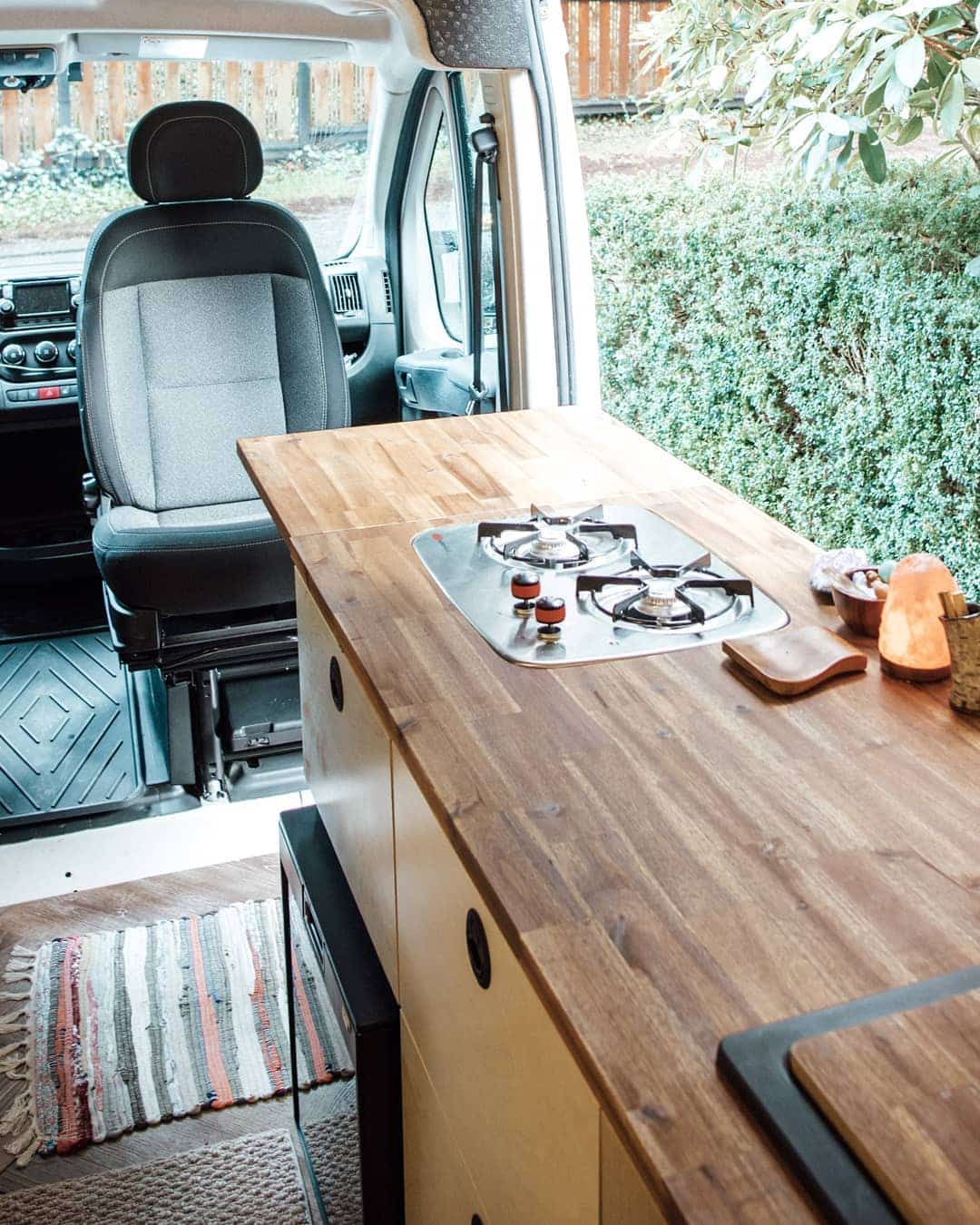 Emily opted for a flip-up counter extension in her kitchen that she could use for her laptop or other activities. The benefit of such a feature is that you can utilize more space in the van when it’s down but have more room for meal preparation when it’s up.

Emily fitted her van with a 70L water tank without knowing how much water she would actually use. As she had to winterize her van for the coldest months of the year, she gained insight into how much water she actually used without relying on her main tank, which was around 21 liters every 4-5 days. She also has a 24L grey tank and a USB-rechargeable water pump. 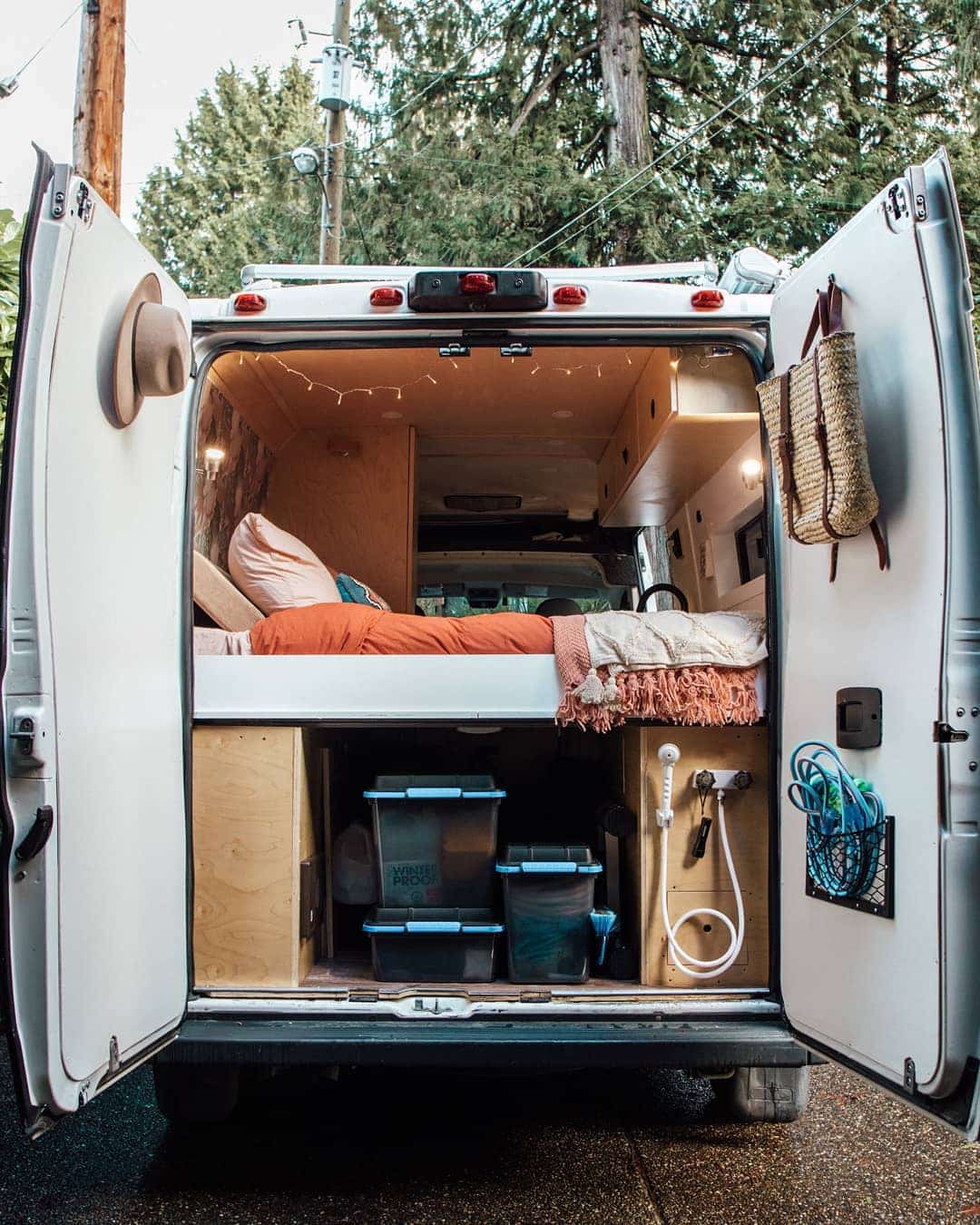 Efficiency was important to Emily when she was building her van, so she made sure she had access to all the essentials by just opening one side of the van. She houses her water tank, hoses, ladder, window scraper, tool bag, and other convenient items in the rear door. Follow Emily’s van life adventures on Instagram @emsvanlife. She also blog about small space living on simplesmallspaceliving.com