Young couple transformed a shuttle bus into a comfortable home

Musicians Savannah and Drew were tired of the daily grind. They were tired of the hustle and bustle and of waking up to head to jobs they didn’t like, to pay for things they didn’t need. The pair had big dreams of being full-time artists and creators, but affording that lifestyle seemed like an insurmountable goal. However, in 2016, Craigslist changed everything.

After seeing a 1987 Ford Coachman campervan, they wondered whether life on the road was for them. And after 4.5 years, 80,000 miles, and 47 states, it’s clear to see that it is. At the time they took ownership of the van, neither Savannah nor Drew knew of anyone living the van lifestyle. They had minimal resources to pull from, particularly as Instagram had only just started taking off. Now, there’s an entire community of van lifers, many of which have become lifelong friends. 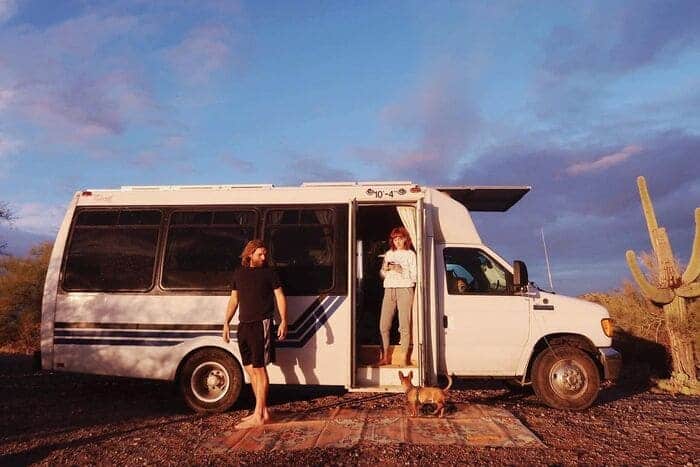 When COVID-19 hit the United States in the spring of 2020, all their touring income as musicians came to a complete stop. As a result, they were forced to evaluate what they would do next. They decided to sell their campervan and start a new chapter – but that didn’t mean giving up on their motorhome dreams.

Instead, they purchased a 2007 Ford e450 shuttle bus and documented the entire conversion into a mobile home on YouTube. After 21 weeks of working on the bus they paid $15,000 for and spending $15,000 on materials, appliances, tools, power systems, and extras, they finally ended up with the perfect tiny home on wheels. 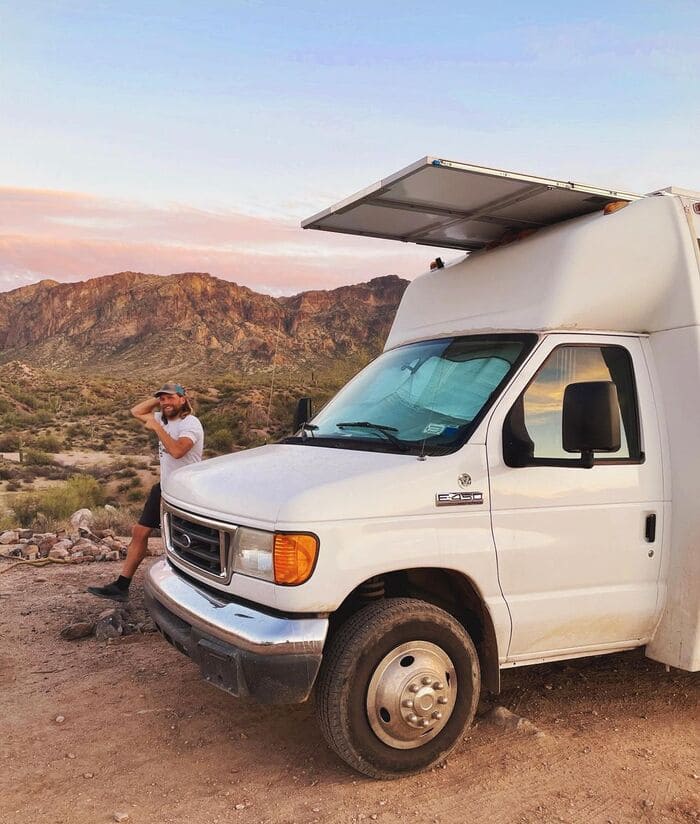 They installed seven solar panels for 1,400 watts of power including a slide-out panel to ensure they have everything they need for life on the road. 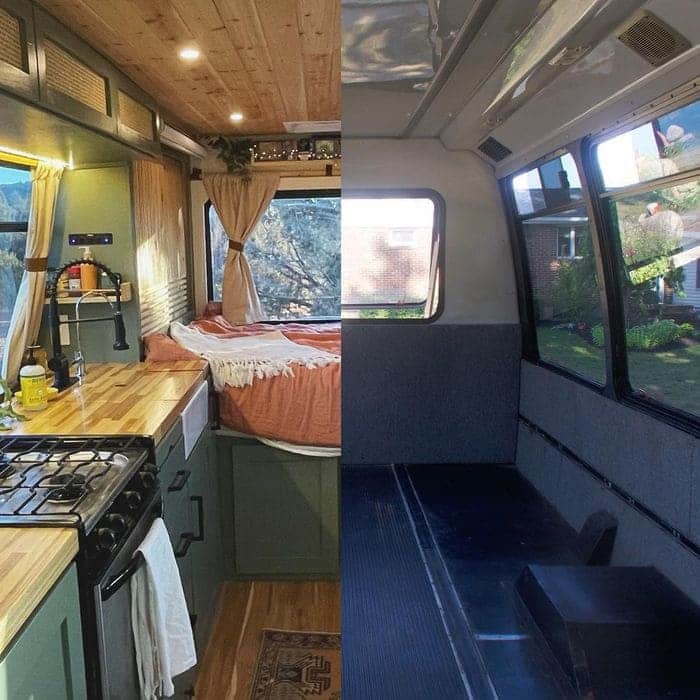 When you see the before and after photos of the shuttle bus, it’s hard to believe it’s the same vehicle. The blank canvas has been transformed into a beautiful tiny home. 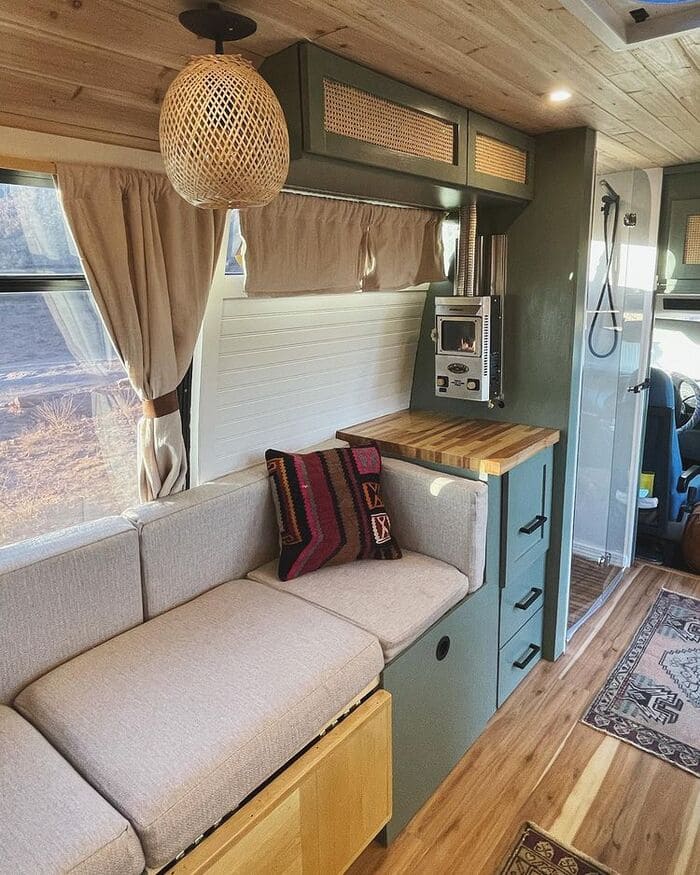 Savannah and Drew’s shuttlebus have all the conveniences you’d find in a typical home, such as heating courtesy of the P9000 propane heater, venting out the roof. They also have a 12-volt freezer on drawer slides tucked away in the cabinet underneath. 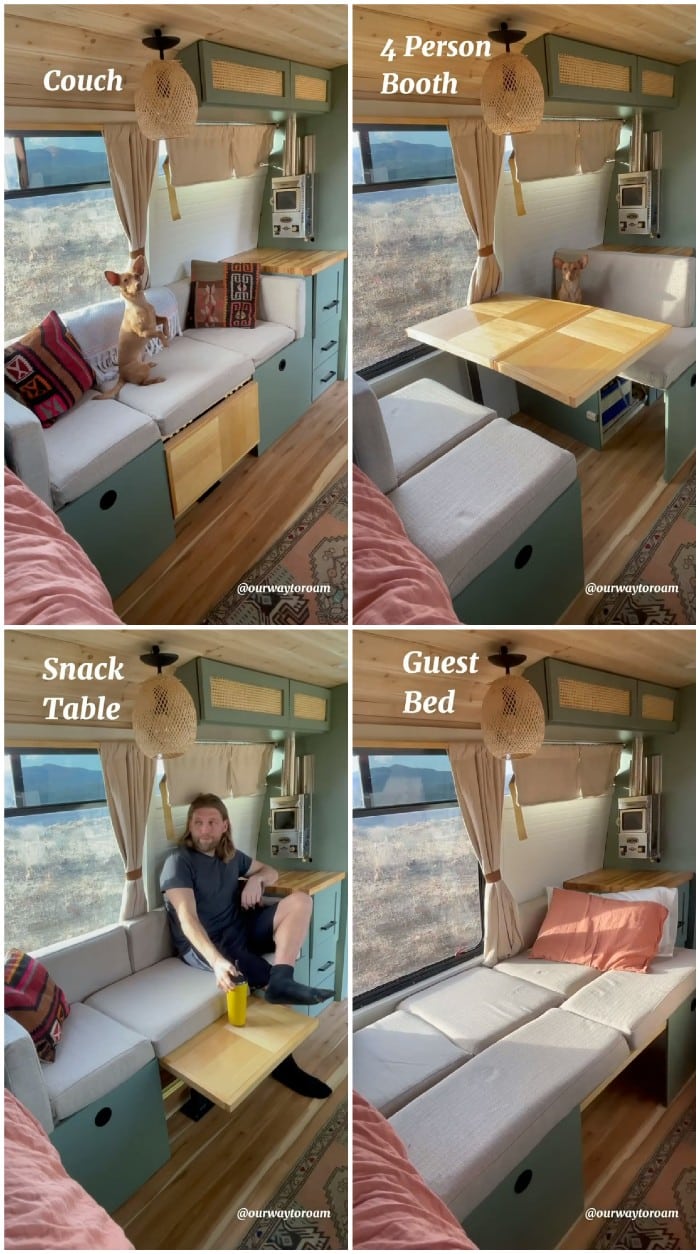 One of the many things Savannah and Drew learned about tiny living is the need for furniture to serve more than one purpose. They took elements of things they had seen in other vans and created a mash-up of all of them in one convenient space. What looks like a relaxing couch during the day in the heart of the shuttle bus has six uses. They can use it as a couch, a two or four-person booth, an L-shaped couch, or a guest bed. The middle section even has a table they can lift up and extend through slats to form an extension. Under the sofa sits a convenient power system. 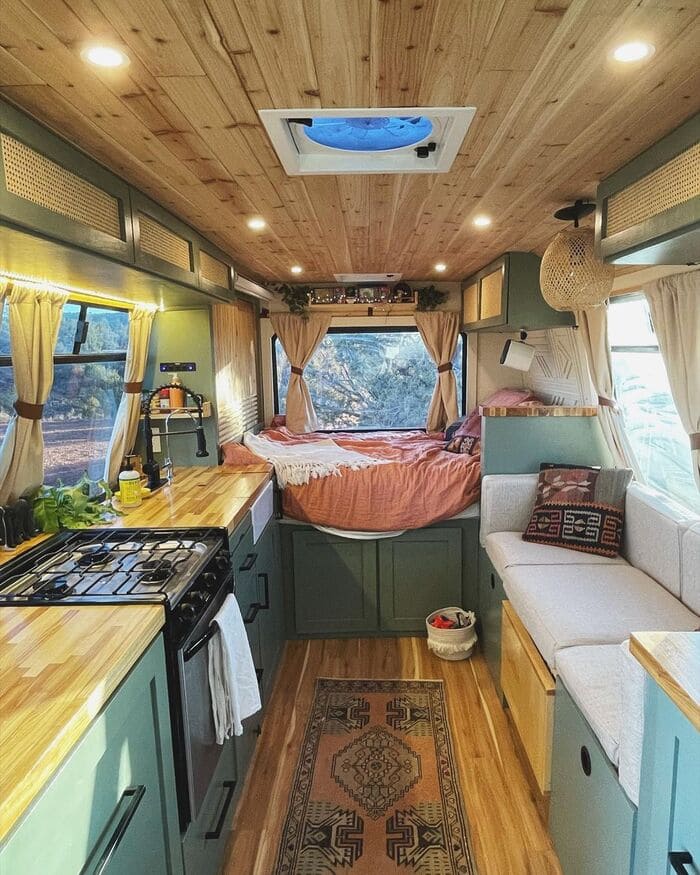 The kitchen is the heart of any home, and it’s also the heart of this shuttle bus. Nestled between two beautiful wood countertops is a three-burner stove and oven. The van also has overhead storage for cups, bowls, plates, a teapot, and a coffee maker. 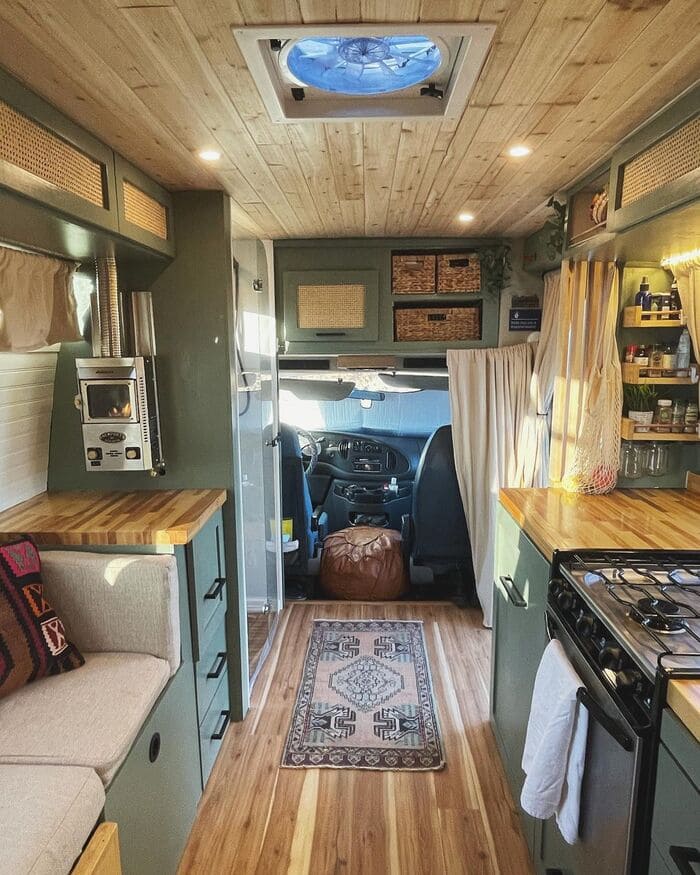 To the left of the stove lies the refrigerator, which was a chest freezer converted into a pull-out refrigerator. It sits on heavy-duty drawer slides for durability. It’s hard to deny the beauty of this space, with a lovely wood ceiling paired with striking wood flooring broken up by an earthy green paint scheme on the cabinets. 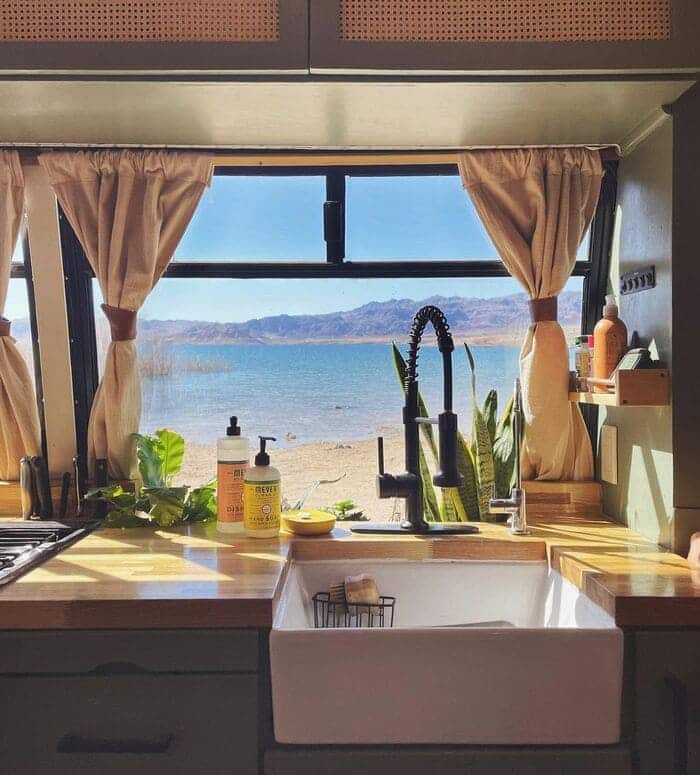 The sink area is perhaps one of the highlights of the entire kitchen space. It has a lovely deep sink, main faucet, and a faucet with a three-stage water filter. It’s also of an apron front style with a cover to maximize the counter space. 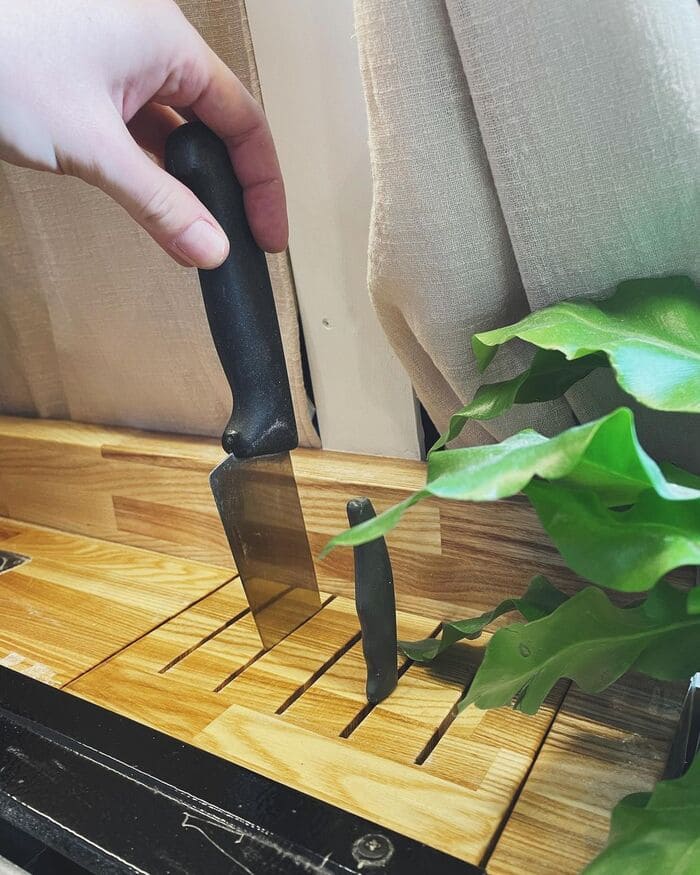 Rather than storing knives in a block that can move around on the road, Savannah and Drew incorporated theirs into the butcher block countertop. 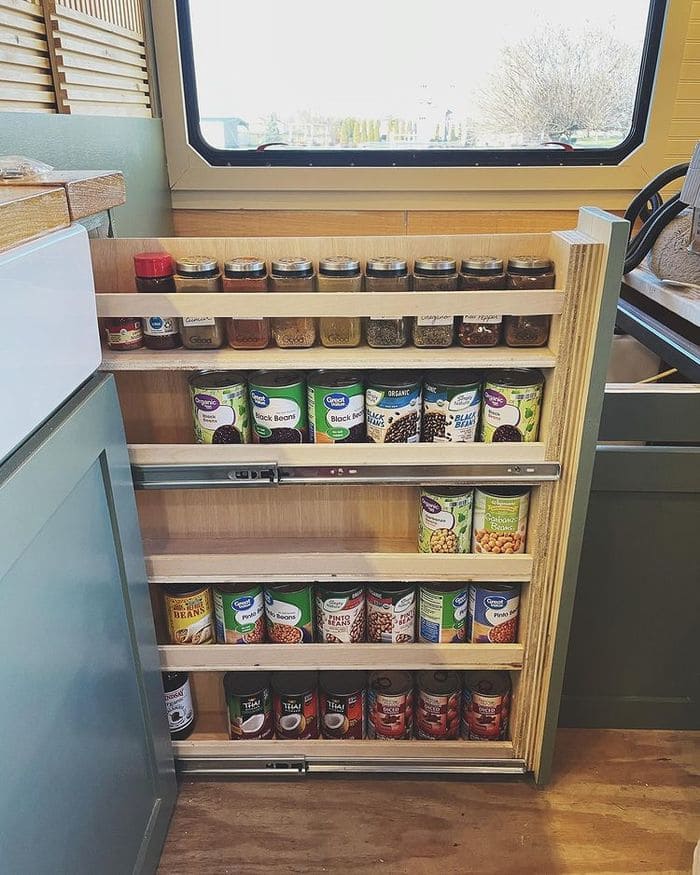 As any van lifer will know, storage and organisation are essential. Savannah and Drew lacked storage in their old van, so they made it a priority in their new one. As vegans, they eat a lot of canned beans. Therefore, they incorporated a pull-out vertical shelf into their kitchen design, with plenty of space for cans and other pantry essentials. 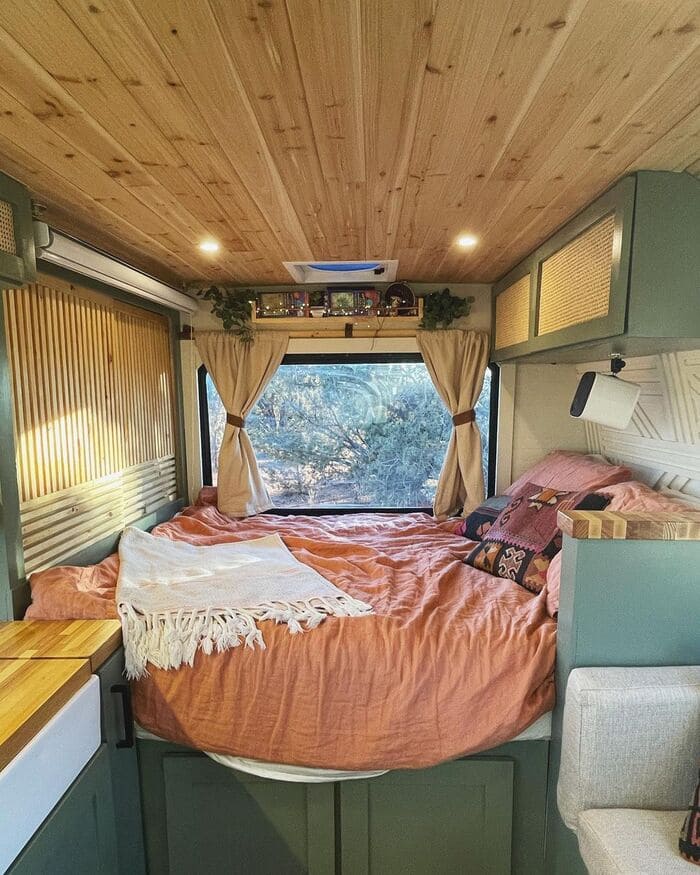 The bed is not only a comfortable area to relax and sleep but a convenient form of storage. The bed base is on hinges, which lift to reveal 75 gallons of freshwater, long-term storage, and a hot water heater. 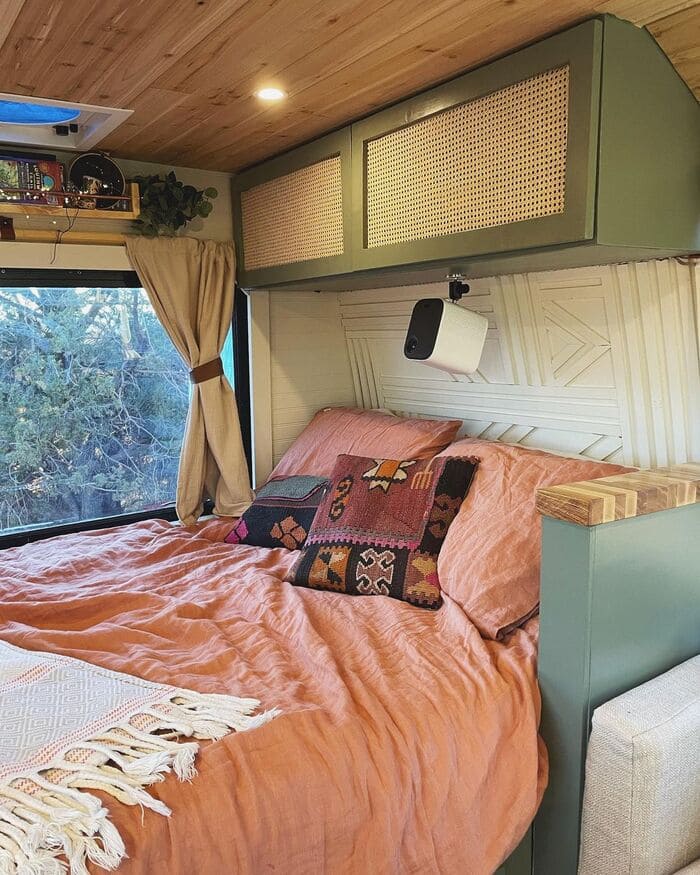 There are plenty of standout features in the master bedroom area, including overhead storage, a stunning wood ceiling, and an accent wall. The cupboard also acts as a magnetic mount for the Xiaomi Compact Smart Projector, which they can mount in three different areas of the bus. 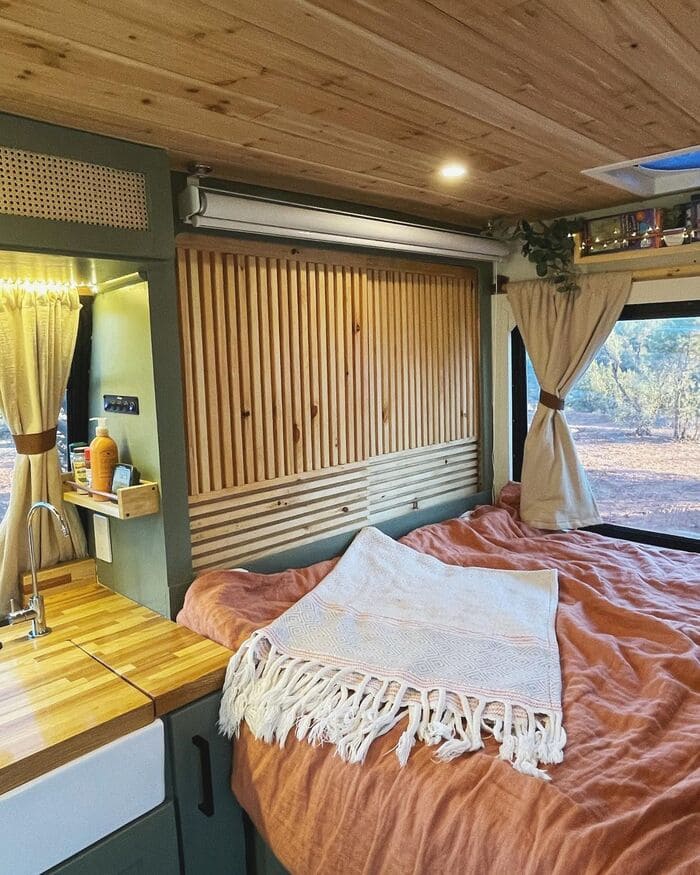 Out of the three premium TV-viewing areas of the house, above the closet in the bedroom is one of them. 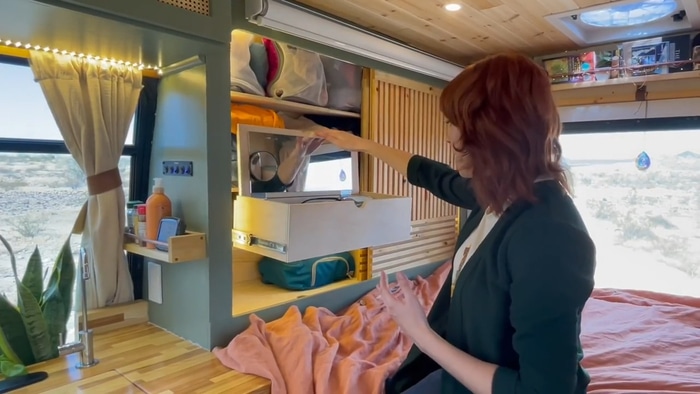 Even though there is plenty of space for clothing and accessories under the bed, Savannah and Drew also incorporated a closet into their shuttle bus with sliding bypass doors. There is also a light in the closet so they can see everything they have, as well as a vanity and mirror. 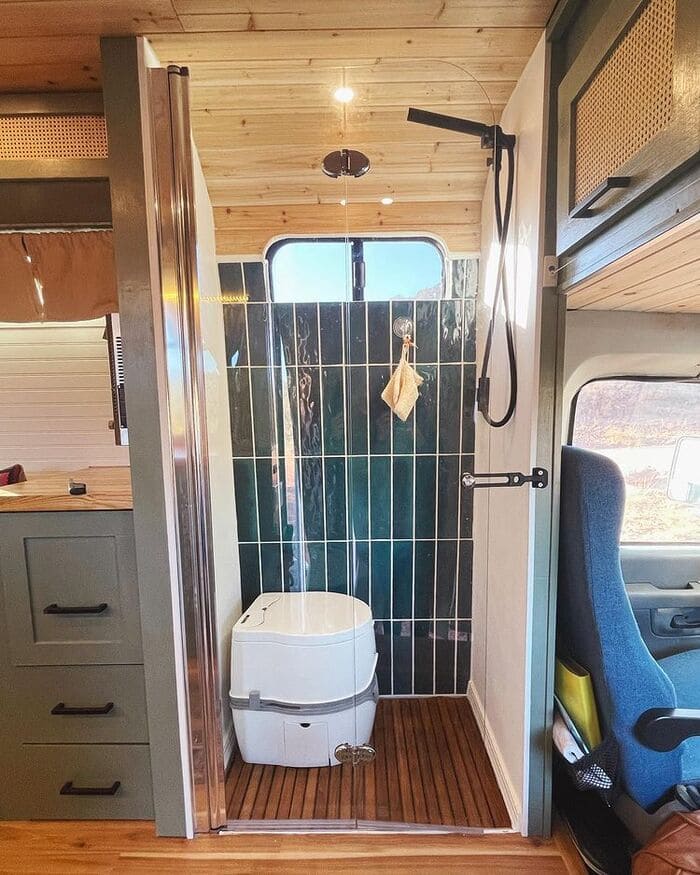 The bathroom can sometimes be a neglected feature in houses on wheels, but it’s certainly not in this shuttle bus. It’s one of the first things you see when you enter, and the teal tile wall will capture your attention. Savannah and Drew decided to install the tiles vertically, which work with the beautiful teak mat with a graded stainless-steel shower pan underneath. This allows water to move directly into the grey water tank under the bus. The shower also houses the Thetford cassette toilet, which they also had in their last bus.

Savannah and Drew believe that to outsiders, it looks like they don’t have a lot. But to them, they say: “We have everything we need. We’re a little thing I like to call time rich.”